7 Colorado Cookbooks You Should Have On Your Shelf

There are still a few good reasons, other than the updated restrictions, that now is a good time to be cooking at home. The holidays are near at hand. And even in the absence of large gatherings, there are not many nostalgic symbols of regularity more comforting than a home-cooked meal. Below are seven books — five published and two for preorder — from some of the region’s most celebrated culinary talent. As diners have been largely dispossessed of some of their favorite spaces, the texts provide an alternative — what may be an even more intimate and certainly a more comprehensible look at what makes these restaurants tick. That and an invitation to live deliciously.

Where to get it: Signed copies can be ordered to be picked up from Frasca, Tavernetta, Sunday Vinyl or Pizzeria Locale. It is also available via Marshalls or Amazon.

The Lowdown: The new title from Frasca founders Bobby Stuckey and Lachlan Mackinnon-Patterson and seasoned cookbook author and co-conspirator Meredith Erickson could easily have been titled Frasca. The decision to instead name it Friuli Food and Wine speaks to the authors’ intended scope. Friuli is undoubtedly a cookbook, but more than that it’s an unabashed ode to Friuli Venezia Giulia, the region that inspired and continues to fuel the flames of what, 16 years later, is still at the top of the state’s most esteemed restaurants. “It’s Frasca’s love letter to Friuli,” said Stuckey.

Initially planned for an April release, Friuli arrived over the summer — bringing together an evocative travelogue, a more than cursory geographical and historical assessment, an erudite wine guide and a deeply personal account of the individual exploits and educations the territory provided its writers. “Friuli is where we truly learned about hospitality. The entire region and its people seem to breathe it,” Stuckey writes in the intro. There are recommendations for specific prosciutto manufacturers, where elsewhere an independent proprietor of a seaside trattoria gets his well-deserved recognition. Some of the recipes have graced the menu at Frasca, others simply provide a glimpse into the supporting acts that have helped to prop the whole thing up. The dishes — of which there are plenty, split across land, sea and mountains — hardly even sit center stage. Rather, they assist in achieving a come hither look into nearly every nook of Friuli’s magnificent idiosyncrasies — love revealed through total comprehension.

Spirit of the West and Soul of the South

Where to get it: The Broadmoor’s webstore.

The Lowdown: Sarah Anschutz Hunt’s dual volume Spirit of the West and Soul of the South celebrates both The Broadmoor in Colorado Springs and the Sea Island Resort in Georgia — two iconic destinations. Both books are set up as experiential looks into each resort’s multifarious splendor. Chapter name’s like “Cowboy Cookouts,” “Storybook Celebrations,”  “Southern Grown” and “Family Time” orient the recipes around events, memories and feelings. Individual sections are introduced with “Sarah’s Take,” which draws from family history, local lore and personal musings to give the recipes a sense of time and place. Much of the cuisine centers around American staples — with recipes like cornbread and sausage dressing, roasted beet and goat cheese tarts and Wagyu and black truffle meatballs forming a set nicely steeped in luxury and leisure.

The Bindery – A Collection of Recipes

Where to get it: The Bindery’s webstore.

The Lowdown: Within the first few paragraphs of Linda Hampsten Fox‘s The Bindery – A Collection of Recipes, she says, “I read once that the best cooks understand how food is a metaphor for the important things in life — love, family and friendship.” From there it’s straight into the process. Organized by season with a brief section on basics, the book is marvelously instructive — favoring brief anecdotes at the beginning of each recipe above an overarching narrative. Even so, The Bindery packs more gusto than plenty of its more story-oriented peers. The recipes, with little more than a few illustrative sentences, form a visible snapshot into not only the things that matter to Fox but those of the people in her life who matter most as well.

The utterly appetizing photos by Maryanne Martin took over 70 hours of shoot time — the book clearly built for a life shared between the coffee table and the kitchen. The dishes are highly inventive, often juxtaposing familiar constituents — corn off the cob shooters and mozzarella s’mores, Philly cheesesteak tacos and roasted red pepper and habanero cappuccinos all make an appearance. The technique, however, is made approachable — yielding the type of plates that can be expected to awe diners without scaring off less-experienced chefs. Fox dedicates the book to both her mother and daughter, the whole thing a great reminder of recipes’ ultimate role in uniting the generations.

A Bite of Boulder

Where to get it: Directly from First Bite.

The Lowdown: A Bite of Boulder came together when First Bite owner and producer Jessica Benjamin was brainstorming ideas as to how to reimagine this year’s Boulder Restaurant Week. As the new head of the organization responsible for the annual celebration 15 years running, Benjamin decided a cookbook would be a viable alternative that still celebrated the city’s hotbed of creativity while engaging the dining public.

The 184-page text features contributions from 30 restaurants from across Boulder county. “I wanted to limit the number of restaurants so I could really focus on telling their stories well. I knew 30 was going to be a good number to capture the variety of cuisines and styles Boulder has to offer,” said Benjamin. Former DiningOut editor Sarah Carpenter contributed many of the restaurant bios, with the vivid photos being handled by Christina Kiffney. Avery Brewing furnishes a barbacoa taco, the Boulder Dushanbe teahouse a Tajik Plov Rice and Shine Community discusses good procedure for a proper ice cream sandwich. The dishes generally favor the casual, with each one still nicely expressing the essence of its contributor. Proceeds are set to benefit the involved establishments.

Where to get it: Available for pickup at Mizuna, Luca, Milk Market, Osteria Marco, Green Russell and Salt and Grinder.

The Lowdown: The Mizuna cookbook is this list’s elder statesman. Published in 2005 — back when Alex Seidel was still executive chef — the book provides a glimpse into the cooking that helped Frank Bonano cut his reputation, long before his stature in Denver dining was completely assured.

While the photos that accompany the recipes are certainly eye-catching, it’s the oil paintings from internationally-acclaimed artist Quang Ho that really bring the book to life. “Quang was on a bit of a food bender then — just back from a culinary tour of Vietnam on his motorcycle, and Frank was on a food bender as well, having just returned from a month on the Daniel line. We went into the cookbook as though it were a piece of art all the way around — a collaborative piece of art,” said Jacqueline Bonanno, Frank’s wife and co-owner of Bonanno Concepts.

The recipes were formalized by Jill Richter, who would recreate the restaurant’s instructions in her home kitchen, adding written steps to the originals’ implied motions. Many of the recipes favor the ornate, with a great deal of them referencing previous recipes for constituent bits. “Noticing that a recipe takes hours to execute is really a testament to the talent of those who have to do it enthusiastically, and deliciously, night after night. Still proud of that fucking book,” smiled Jacqueline. Mizuna is art, and much of it is best explored when there’s some extra time to relish its nuance. 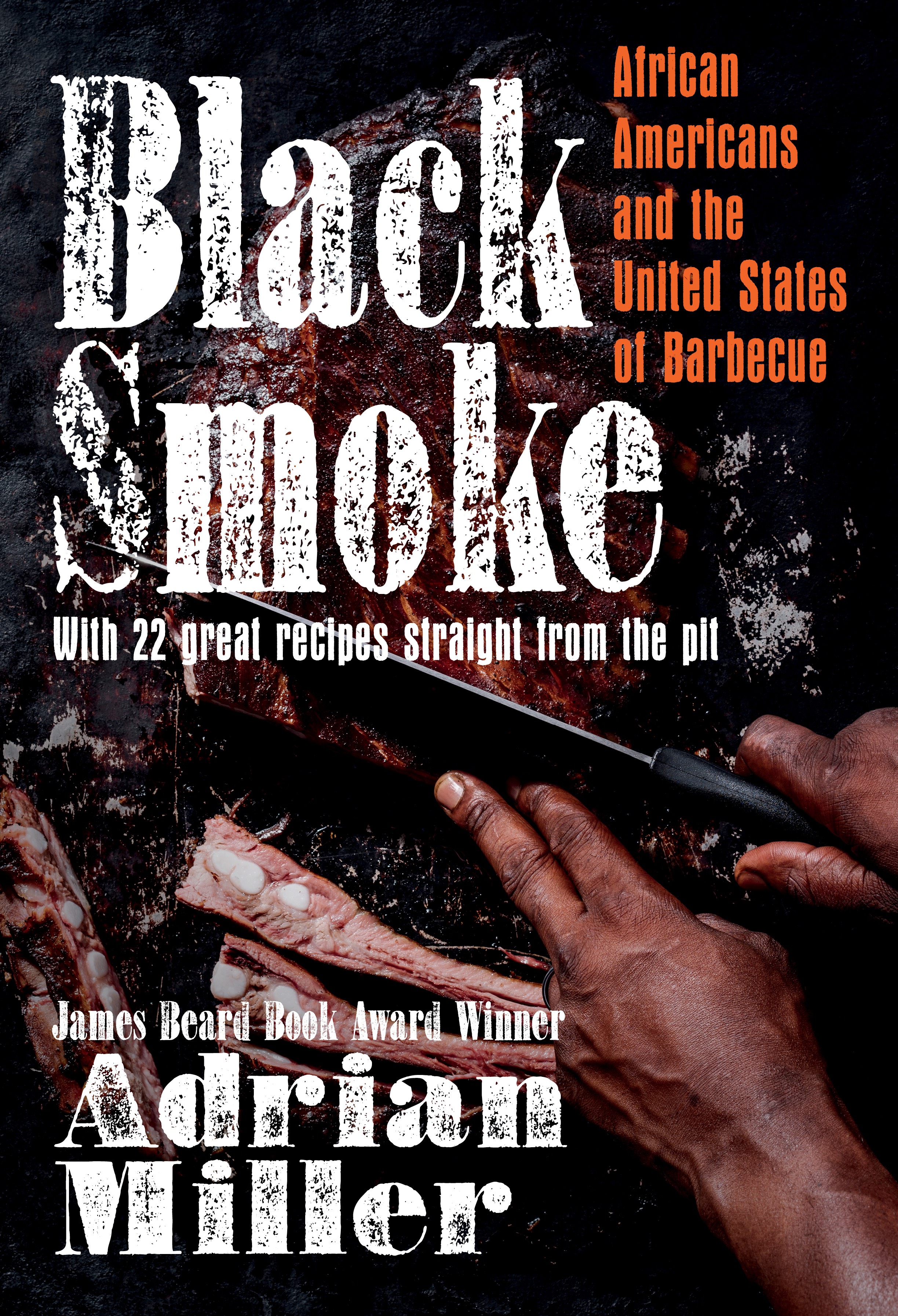 Where to get it: Available for preorder here. Books are expected to ship in late April 2021.

The Lowdown: Author Adrian Miller describes his upcoming third book Black Smoke: African Americans and the United States of Barbecue as not a travelogue, but a history with recipes. In his previous two books, Miller introduced a James Beard Award-winning discussion of the history of American soul food, then explored the criminally underrepresented record of Black influence in the White House kitchen. Black Smoke aims to discuss barbecue across the nation and through time, tracing the style back to its Native American roots and its subsequent enhancement across centuries of regional variation and individual mastery. Written in earnest since late 2018, Miller’s latest work is set to continue his tradition of exhaustive research and exquisite prose. While Black Smoke is by no means a cookbook in any traditional sense, it should be a valuable asset for anyone who believes that the best things in life are infinitely richer when flavored with context.

Cost: $36 for preorder or $49 for direct delivery. Books will be available for pickup in mid-December with direct orders becoming available on November 26.

Where to get it: Available for preorder here.

The Lowdown: Fiona Arnold — like many business owners this year —  has been throwing ideas at the wall to see what sticks. It may help that those walls are in Room for Milly, Queens Eleven or one of two Blue Sparrow Coffees, all of which she owns along with her partner Jeffrey Knot. After Milly hosted a series of successful cocktail classes, Arnold began toying with the idea of producing a recipe book that put a spotlight on the bar’s many delightful eccentricities. Before long she switched gears, realizing she was much more interested in pursuing a project that benefitted the community at large. “Why wouldn’t I want to do all the independent cocktail bars in Denver?” she said. Her first invitations were sent out to prospective bars on October 16.

The Happy Hour Handbook is set to arrive a mere six weeks after Arnold first began crowdsourcing the idea. It will feature cocktail and appetizer recipes from 16 participating bars — including Brass Tacks, Williams and Graham, Death and Co., The Family Jones and Milly itself — with photos by Andi Whiskey. All proceeds will be distributed to the involved bars and restaurants, with preorder books being made available for pickup from the participating locations. While Arnold certainly hopes the project will produce viable income for everyone involved, she says it’s as much about inspiring memories as it is generating cash. “Maybe they’ll think to do a takeout order, maybe they’ll add a spot to a list of who they will go back to,” said Arnold.

All photography by Alden Bonecutter except where noted.