Every year for nearly the last decade, the walls of RiNo have been painted and re-painted in the street art festival CRUSH. The original acronym came from “Creative Rituals Under Social Harmony” when founder Robin Munro started the festival to celebrate graffiti writers in Denver. Each year since, the gathering has grown to include street artists and muralists while still highlighting graffiti writers and Denver graffiti crews specifically. Now, CRUSH will be a festival dedicated to all urban art — from painted murals and graffiti to installation street art to digital experimentations and more.

After a huge expansion last year that attracted more artists and spectators than ever before, this year the festival was relaunched with the help of Jamie Giellis of the RiNo Art District and the new executive director, Carlo De Luca. Though there are changes aplenty, the basics of CRUSH WALLS (a name change that came as part of the relaunch) are the same — to bring breathtaking art to the streets of RiNo, spotlight artists who make that possible and celebrate the community that accepts and embraces the scene. 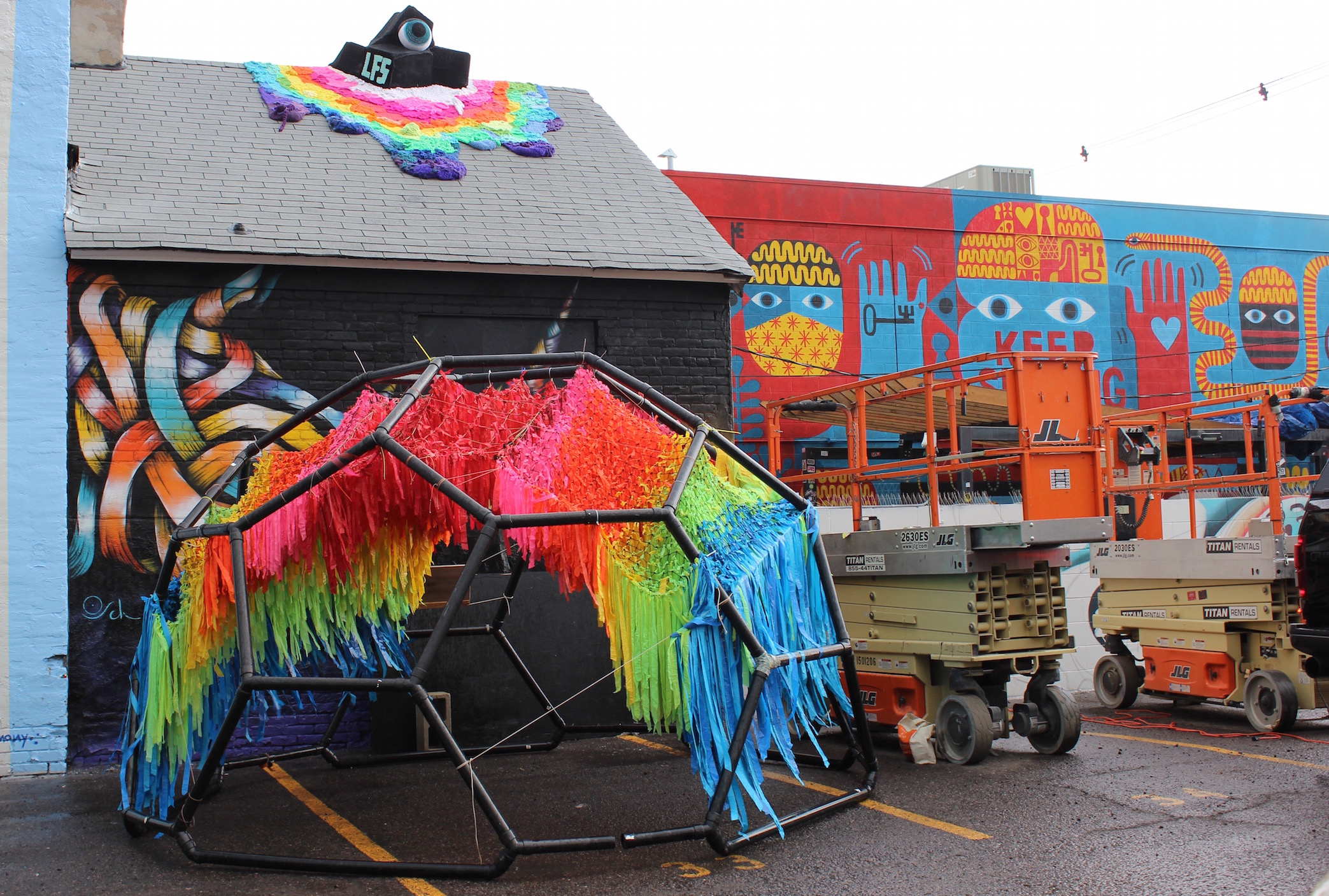 A scene from CRUSH 2017 including Ladies Fancywork Society and Emma Balder. Photo by Cori Anderson

So what are the changes, then? It’s now about urban art — a terminology carefully different from “street art” so as to include many different kinds of creative rituals — like light displays, literary artists, digital animation and more. Instead of just providing onlookers with visual candy, CRUSH will now add programming and extra events onto the lineup with artist talks, walking tours, film screenings, the Denver Bazaar Art Fest, an installation by Juxtapoz that’s never been shown outside of Miami before and a mini street skate park — to name a few.

The footprint has expanded again — last year the festival doubled in size to include areas in north RiNo and an annexed spot by RedLine, and those will still be included this year but also west RiNo and Brighton Boulevard will now be part of CRUSH. In order for onlookers to appreciate the entirety of the festival in a single circuit, a portion from 38th down Brighton Boulevard to Larimer and 25th Streets will offer a shuttle service. The majority of walls will still be found in central RiNo, from 26th to 29th in the alley between Larimer and Walnut Streets.

But the festival would not be possible without an enticing and exciting lineup of artists, both local and visiting. Many local artists are returning for another year while some are making a first-time appearance. Part of the relaunch of CRUSH consisted of an open request for proposal from artists — a request that was met with over 230 applications. Of those applications, over 60 local artists were chosen. Some returning heavyweights (and generally some of the most prolific street artists in Denver at this moment) include Munro (aka Dread), Gamma Acosta, Birdseed Collective (headed by Anthony Garcia Sr.), Thomas “Detour” Evans, Jolt, Patrick Kane McGregor, Mike Graves, Michael Ortiz (Illson), MPEK and Tuke. Continuing in the original vision of CRUSH, Denver graffiti crews DF, KD, MDR, RTD, TKO and Creatures will have alley takeovers to show off their lettering skills.

Some other Denver artists to build the anticipation of the festival include the delightful swirls and shapes from Anna Charney, the black-and-white gritty mouse characters from DINKC, the academic profundity and folklore-driven murals from Jason Garcia and the stunning freehanded expertise and character evolution from Casey Kawaguchi. It will be hard to miss the colorful talents of So-Gnar Creative Division — the group responsible for the “Love This City” mural series. And the elusive but well-respected Jeremy Burns, who painted the two-sided face on Larimer Street in 2015, will participate this year after living and working in RiNo since 2004.

People who are even more hip to the street and urban art scene can find themselves waiting impatiently to watch more underground artists at work. One Denver favorite, Chris Haven, who spray paints cone characters all around the city usually outside and in alleys, will paint an indoor mural at Izakaya Ronin on Brighton. Shannon Galpin and Diana Garcia will give a wheatpaste demonstration to allow anyone a chance at being a street artist, if only for a few minutes.

Since the new terminology includes all urban art, the festival will also include more than painted (or pasted) walls. Ladies Fancywork Society will return for their third year at CRUSH to install some wonderful and whimsical installation they’ve likely been crocheting for months already. Interactive and experimental lighting design duo Knomad Colab will change the visual landscape at the corner of 35th and Brighton — a short distance from their public art project in the underpass on 38th. Canadian sculptor Laurence Vallieres will install one of her acclaimed cardboard sculptures, bringing the festival into even more three-dimensional fields.

One of the bigger announcements about this year’s festival is that world-famous street artist Shepard Fairey will paint a wall on Larimer. Other international artists of note that have been invited to celebrate Denver’s urban art community include Add Fuel from Portugal, Jaune from Belgium, Roadsworth from Canada, Nomad Clan from the U.K, Smithe from Mexico, Pichiavo from Spain and Poni from Mexico. Another announcement that comes with its own prestige is the live illustration battle “Secret Walls” where artist teams compete against each other in real time and in front of an audience with 90 minutes to complete their piece. The secret part is the location, which interested individuals will have to stay tuned to find out more about.

CRUSH this year will be so much more than a chance to see street artists working in real time — although we will admit that is our personal favorite part — it will be an opportunity for members of the community, the city at large and visitors to Denver to experience the burgeoning art scene in all its glory. From print releases (so you can take home a piece of the street and put it on your wall) to guided walking tours to stencil and wheatpaste workshops to immersive art installations and satellite exhibitions that will showcase what some of the artists can do indoors, this year’s festival is going to be one for the books.

CRUSH WALLS will take place September 3 through 9, 2018 in RiNo.