Piercing eyes, bold black lines and the reappearance of a character are the mainstays of Denver street artist Casey Kawaguchi’s style. Spread across the city, these mostly massive murals are painted freehand by Kawaguchi and are quickly becoming monuments to his mastery. Fans of his work may wonder—as the mysterious face pops up here and there—if it’s his signature or a representation of something deeper. But what makes Kawaguchi and his street art stand out from some of his peers is his unmatched ability to use a spray paint can like a pencil, sketching out illustrations with precision while retaining a hand-drawn quality. 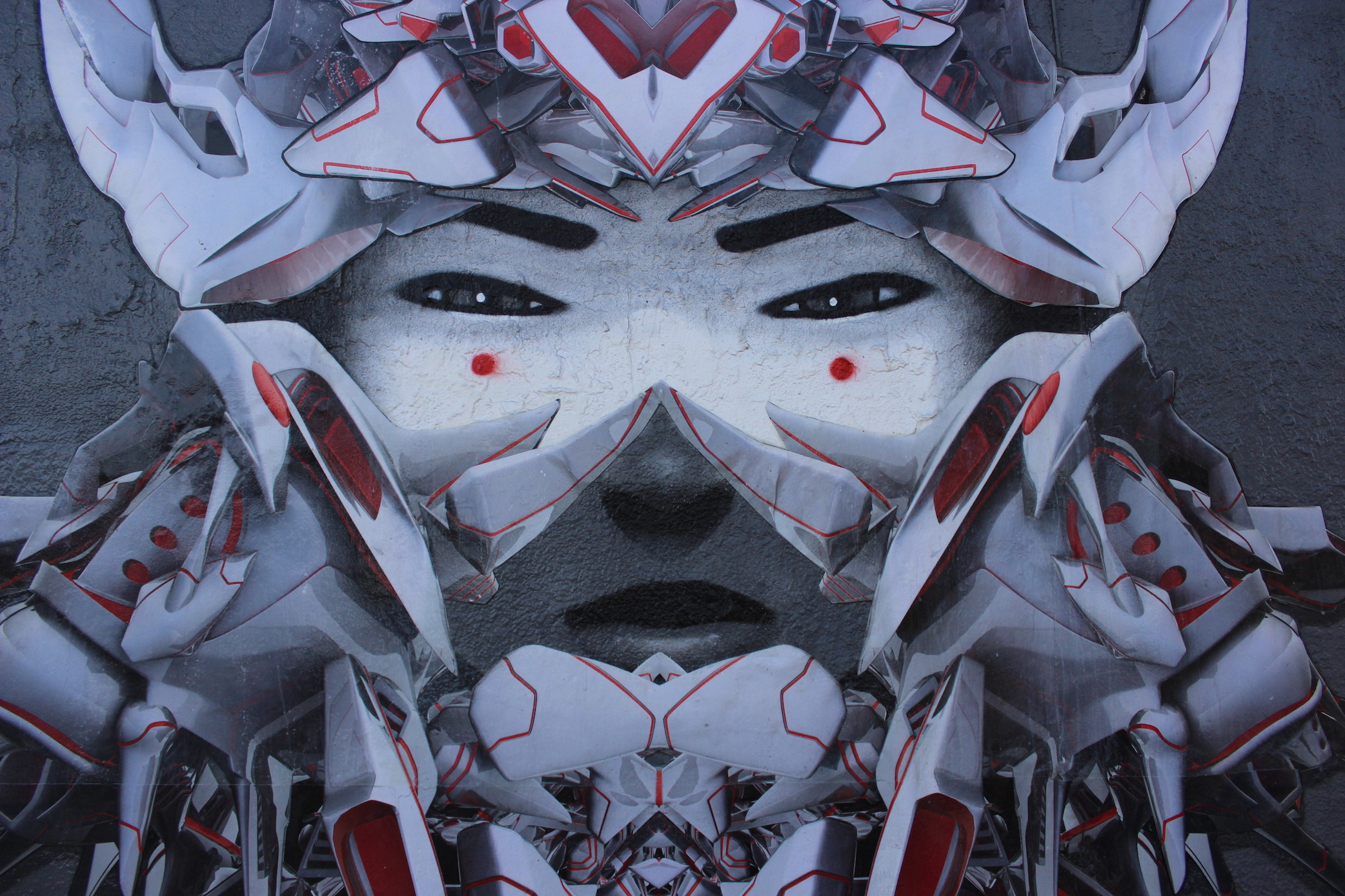 Detail of mural painted by Kawaguchi and Kobayashi. Photo by Cori Anderson

Kawaguchi lived in Salt Lake City before moving to Denver in 2015. While in Utah, he learned the basics of spray paint from graffiti artists and lettering fanatics who strictly used a freehand technique. It became an integral part of his own style, though he never found the same passion in lettering as he did in creating people and characters. According to Kawaguchi, in 2012, he was chosen as one of 20 Street Artists to Watch by the well-known American graffiti artist Saber for the magazine Juxtapoz, where he was featured on Saber’s own blog and Twitter accounts, fueling his urge to launch a full-time career. Moving to Colorado opened Kawaguchi up to bigger possibilities with his art than Salt Lake City could offer, especially when he landed his first wall at the street art festival CRUSH in 2015.

“As soon as I started spray painting, I wished I would have started as early as possible. I found myself wondering why I hadn’t been doing it for years. Spray paint was a natural growth to working large scale and doing my art at the size I always saw it in my head,” Kawaguchi explained, “And I felt the same way when I moved to Colorado. What was I doing away from this place for so long?” 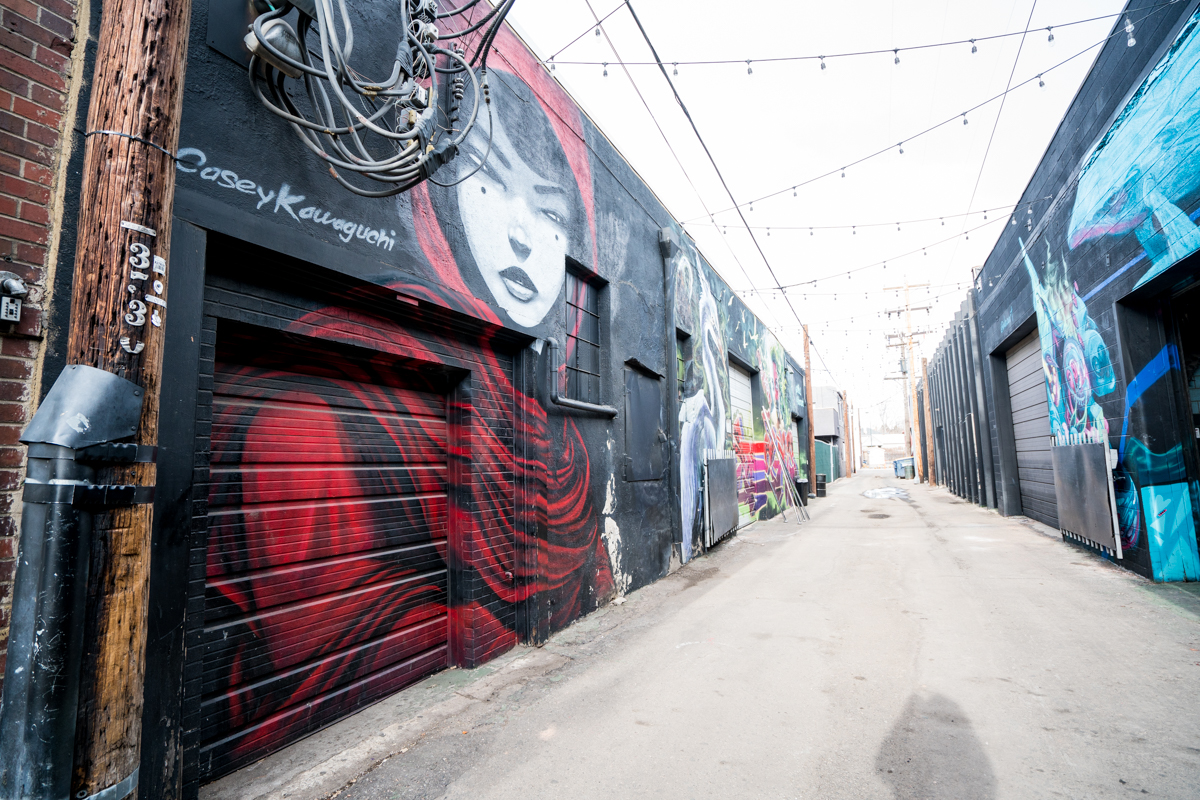 If spray painting and living in Denver are familiar to Kawaguchi, Asian heritage is familiar to him as well. His father is Japanese and some of that side of his family still lives in Japan, though Kawaguchi’s closest relatives moved to the US many years ago. There is an unmistakable influence from Japanese culture in Kawaguchi’s work— from his color choice to the features of the face— and there is a seriousness in his practice that mimic the strict honor codes of the samurai, bushido. “A lot of people have asked me why I don’t do lettering or why I don’t learn to tattoo, but each one of those are their own discipline and they deserve their own dedication in order to achieve any level of mastery. I don’t know how far down my path on my character sketches I am, but my style has developed by focusing on what I really want to paint,” commented Kawaguchi.

The character sketches of Kawaguchi’s are not exclusive to walls and spray paint, though he admits that many of his portraits are an evolution of the same character.

“I myself am becoming more curious about why I am creating this character. I feel like it’s an evolution of the same character that’s been happening over the years. I figure it out as I’m painting her over and over. I think it’s something very human to capture in the face – there are very subtle things that make a face beautiful and captivating,” he said. 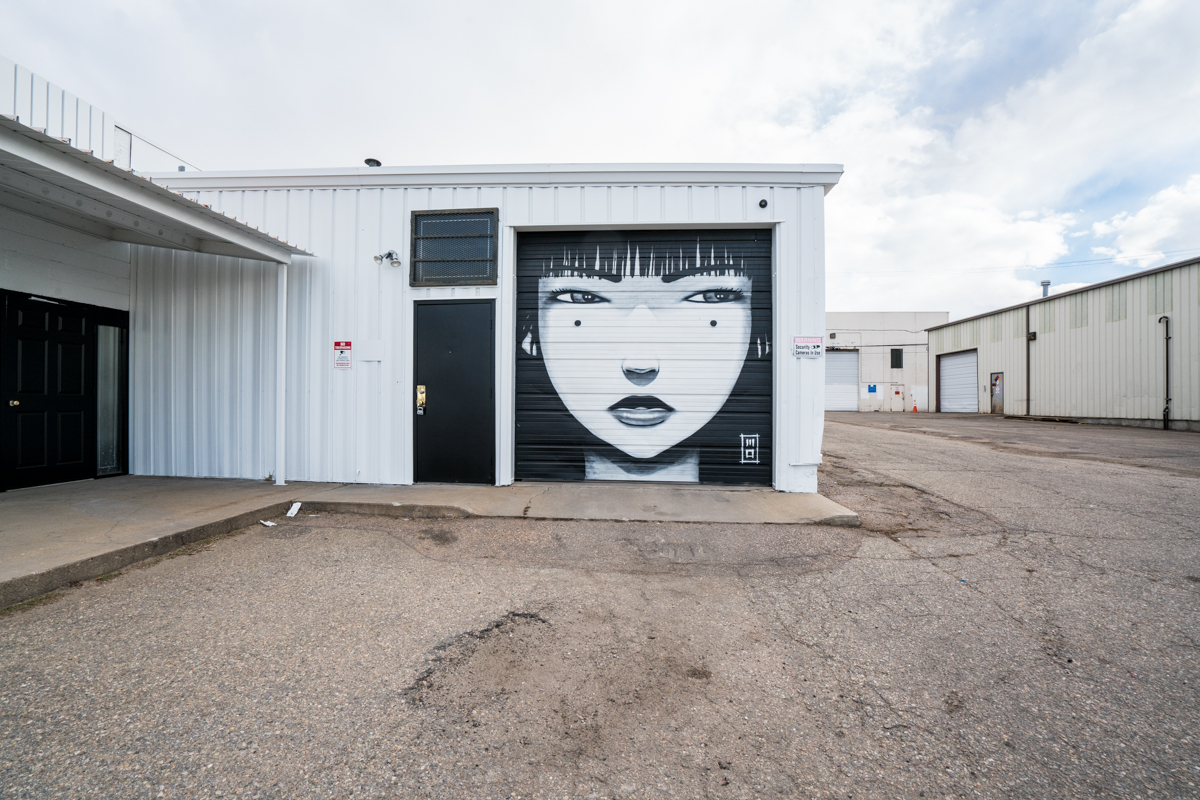 His dedication to progressing his technique while distilling his own style has earned Kawaguchi credit in Denver as a notable street artist. During his first CRUSH experience, Kawaguchi met many other Denver street artists—like Ease One, Robin Munro, JOLT and others— and bonded with them immediately. Ease One and Kawaguchi painted a collaborative mural that first year, leading to an unexpected partnership that is still in progress, visualized by the four murals across the city they’ve created together in the years since. The most recent one was painted during CRUSH last year, titled “Choose Your Weapon”—located in the alley between Walnut and Blake Streets on 32nd—and clearly illuminates the honed skill of both artists. The making of this most recent mural was captured on film by a local independent filmmaker, David Kaufman, who embodied the delicate details of Kawaguchi’s style while also cluing in viewers to the capacity of Kawaguchi’s talent. 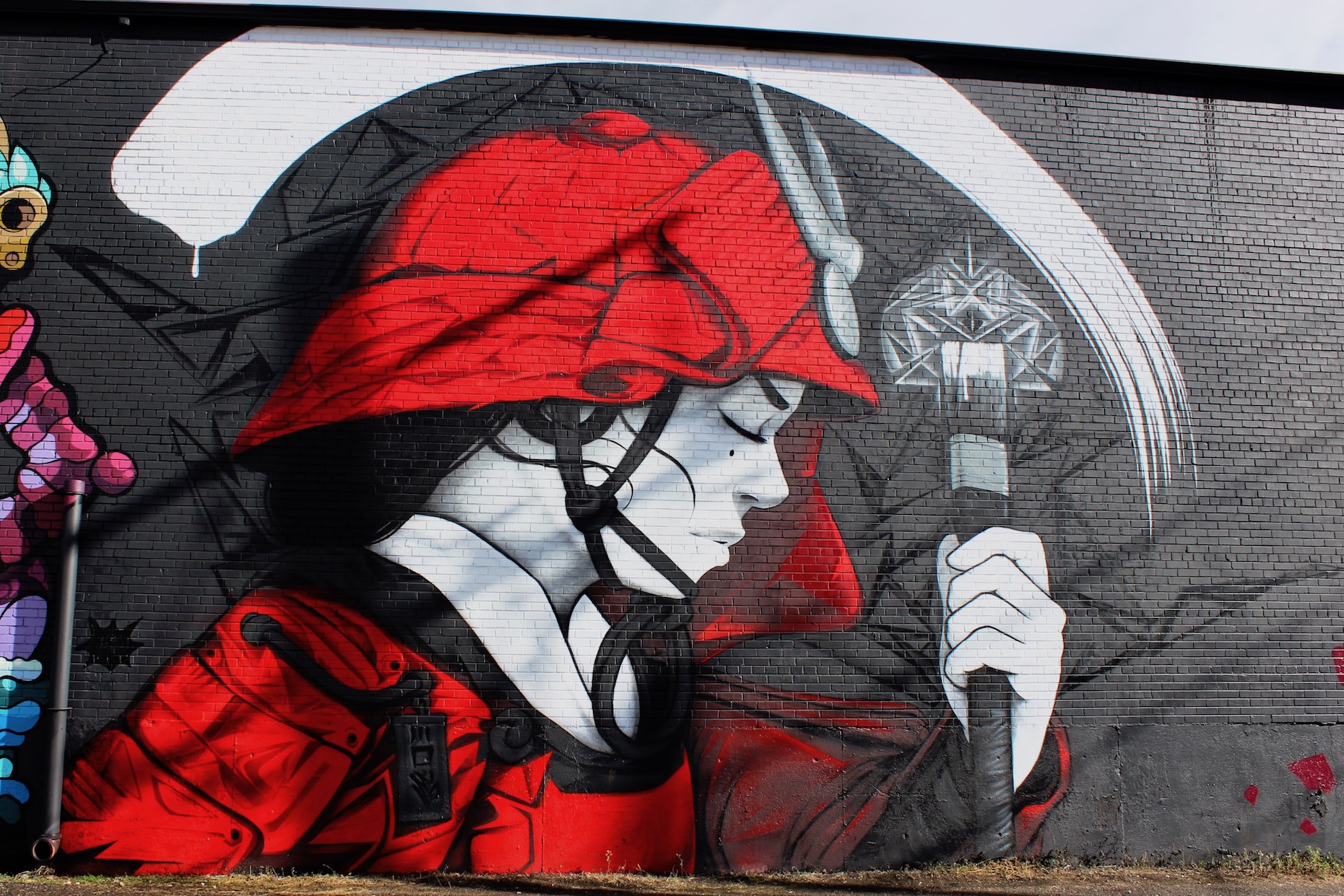 “Choose Your Weapon” collaboration mural with Ease One. Photo by Cori Anderson

Kaufman was in charge of CRUSH’s official trailer video in 2016 and met many artists during his filming, including Kawaguchi. In 2017, though CRUSH used a different company to produce their video, Kaufman still wanted to be involved in the scene somehow and decided to highlight a single artist with as much sincerity and depth as possible. “My whole intention was to watch and listen. To be as unobtrusive as possible as to not interfere with his creative flow. This wasn’t about me, it was about him and his art, so I did my best to make sure that came through in our film,” Kaufman explained. Mastery, as the short film is named, deserves a closer look if not because it is a succinct snapshot of an accomplished artist, then because it perfectly speaks to the heart of Kawaguchi’s work in particular. (Watch the video below – it’s about four minutes long.)

This upcoming year will be busier than ever for Kawaguchi, both within Denver and beyond. There are several opportunities to witness his skillful painting style in person— one coming up on February 23 during ARTOPIA at The Church and another at Meadowlark Kitchen on April 6. On March 2, Kawaguchi will showcase his smaller, illustrated artwork as well as release a limited edition t-shirt at Abstract Denver for the grand opening of Abstract’s new location at 742 Santa Fe Drive. That show will also feature work from Lance Inkwell. Expect to see Kawaguchi working on collaboration pieces with many other artists, like Taketo Kobayashi (@humanoise) and most likely Ease One. In March Kawaguchi will travel to Memphis to paint a mural for Crosstown Arts: Moonpie Project—an ongoing mural project curated by Michael Roy aka BirdCap.

Kawaguchi’s success is something that comes as an organic extension of the pursuit of his own truth. His style and catalog of murals in and out of Denver are something to keep an eye on in the street art scene but also in the greater art community. About his success and the path that brought him to where he is now.

“Searching for that inner truth is what I admire most in another artist and what moves me. That’s what has the most value, tapping into your own truth, everything follows after that. Don’t worry about the end result, it’s all about small accomplishments that build up. I have to remember to take a look back and realize how far I’ve come because I am always focused on the next step to take forward,” he said.

Seeing all of Kawaguchi’s Denver murals seems to tell a story— and we’ve mapped out the locations to help you follow along.