[Update: Shepard Fairey is painting in the parking lot next door to Matchbox, 2625 Larimer St, Denver]

There aren’t very many household names in the street art world — not yet, at least — and so the few guerrilla artists who have made a brand or a reputation for themselves across the world are more in demand now than ever before. One of those artists is Shepard Fairey, who despite (or because of) having a pretty impressive list of arrests for his unsanctioned graffiti and poster bombing, has made a full-time career in street art. And in September, Fairey will come to Denver to participate in the annual CRUSH street art festival, transforming a wall on Larimer Street in RiNo.

READ: 20+ Artists We Are Excited to See Paint at CRUSH This Year

CRUSH (now known as CRUSH WALLS) was recently taken over by RiNo Art District after seven years of being organized by founding artist Robin Munro. Though Munro will still be a pivotal part of the development, planning and execution, RiNo Art District is bringing more structure and a lot more funding to the project. After an expansion last year from two days to a week in duration and also expanding the footprint of walls covered, this year will see even more growth, including artists like Fairey.

Now 48 years old, Fairey’s first foray into the street art world came at the ripe age of 19 when he was attending the Rhode Island School of Design (RISD). As a skateboarder and punk-enthusiast in his teens, the transition to street art felt seamless for Fairey who admittedly only created his first art to impress or humor his friends and peers in the art school and skate worlds. That first work was what is now known as the OBEY series, although it started as “André the Giant Has a Posse” sticker campaign. Fairey simply printed an image he digitally altered of a photo of André the Giant on stickers and left them all over the city. Later, he added the word OBEY as a kind of slogan to go along with the image and his tactic of pasting them in repetitive displays. The campaign spread quickly, eventually popping up in cities all over the world thanks to a network of artists who replicated Fairey’s design or used his stickers directly. 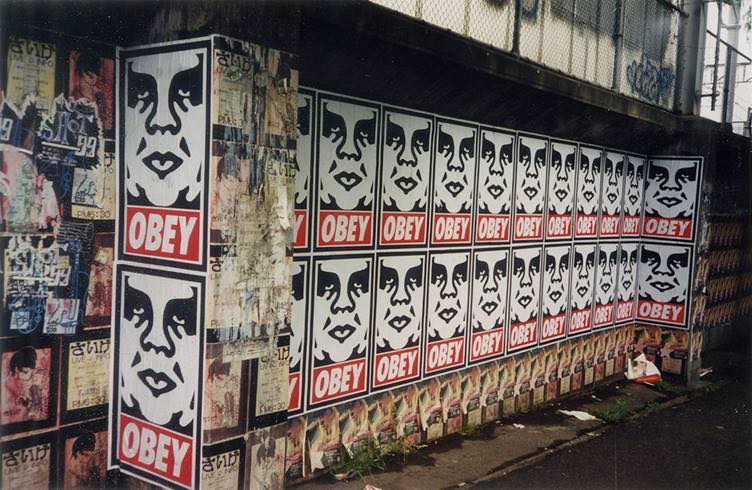 Though Fairey’s symbolism became popular quickly, he didn’t immediately become well-known and instead started a printing business to support his passion as a part-time guerrilla graffiti artist. Through this experience, Fairey honed the craft of printing on t-shirts, stickers and posters — all avenues he then used to spread his political and social dissent. But Fairey is not a rebel without a cause, even if he grew up comfortably, and his disapproval about a spectrum of issues rings true to many people. Instead of the fiery hot-headedness of most in the punk world, Fairey spends his time crafting artistic political campaigns that can be both subversive and in-your-face. One of Fairey’s most-cited influences is the art of propaganda and advertising, where he uses their same tactics (repetition, redundancy, curiosity) but for almost opposite purposes. 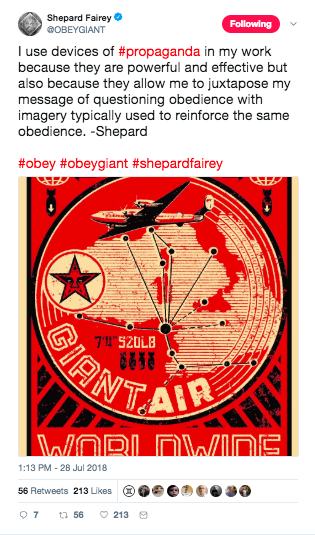 What really launched Fairey into becoming a household name — more than his OBEY series or any of his guerrilla pieces that were legendary in the underground scenes — was his creation of the HOPE poster in support of Obama’s 2008 Presidential race, though it was technically unaffiliated to the campaign itself. The success of that poster in terms of visibility and replication was exponential but Fairey did not succeed financially or personally, he created the poster because of his frustration at George W. Bush’s administration and his honest hope that Obama could do better. And that’s a bottom line for Fairey, throughout all of his work and his 30-year career, to speak honestly about issues and problems he sees in society, in government, in politics, in banking or in any established institution unwilling or unable to change to suit the needs of the people it serves.

His work is inspiring because of that fervor — but in that passion he does not sacrifice meaning, creating work that is both informative and eye-opening. An academic punk, Fairey does not just say “fuck the system” he says “here’s why the system is fucked.”

But Fairey has evolved in his artistry in the last three decades to include more color and more finesse. Though the OBEY series snowballed into a clothing line that still replicates the black-and-white graphic nature of Fairey’s first stickers, many of his murals, wheatpastes, posters and other art focuses on positive imagery and people. In 2014 he painted a nine-story mural of Nelson Mandela, a personal hero, in Johannesburg, South Africa. And in 2015 he created a sphere that hung from the Eiffel Tower in Paris that both celebrated nature and reminded viewers of the threats we pose to it, later completing a mural in Paris of the original image for that sphere.

This upcoming visit of Fairey’s to Colorado will not be the first for him. He was just here a month ago to install a mural in Aspen as part of his Global Mural Project. It’s also not his first time working in Denver — his piece is still visible at the Center for Visual Arts on Santa Fe, which he completed in 2012 before he exhibited work at the local art gallery dedicated to street and urban art, Black Book Gallery. But this one feels different, perhaps because his involvement in CRUSH seems to be an endorsement of the festival and of Denver’s street art scene in a big way. 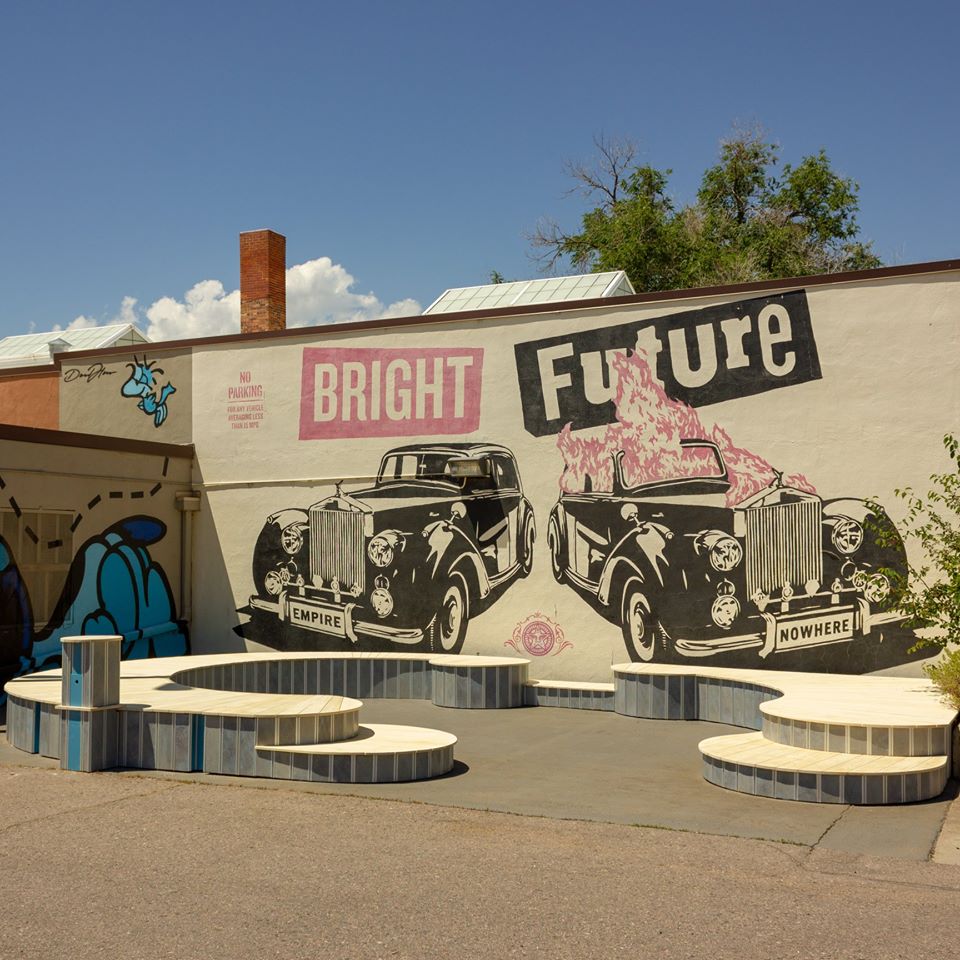 At this time, the exact location of Fairey’s upcoming CRUSH mural has not been announced. But, the landscape of Larimer is sure to change dramatically with whatever Fairey decides to create. The famed artist is known for many things at this point, but he is certainly not known for subtlety.