Hello Denver, My Name is DINKC

Welcome to our brand new series, Hello Denver My Name is… where we profile different people in Denver you probably don’t know, but should. Get ready to meet painters, dancers, comedians, musicians, designers and just generally fascinating people that help make Denver awesome.

Black, white, red and gold are his colors. His tools are primarily paint markers and spray paint cans. And for the last year, he’s been working his way up in this city’s art scene one brush stroke at a time. Denver, meet Laedan Galicia or DINKC — an upcoming artist who brings Mexican-American culture, gritty cartoons and a keen eye for detail to our streets and galleries.

At just 27 years old, DINKC (just say “Dink”) has already accomplished a commendable amount. Though he’s just starting to make a name for himself here, he’s been a full-time illustrator since he graduated college in Kansas City. Not only does he create gallery-worthy canvases and eye-popping murals, he also customizes toys, sneakers, skateboard decks and designs stickers, masks and merchandise and branding for other creatives. Once you get to know DINKC’s style, it’s nearly impossible to not recognize it thereafter because it’s so distinctly him.

303 Magazine spent an afternoon with the talented artist where he spoke about his freehanded process, his old-school inspirations and what he thinks about “earning a spot” in the Denver art scene. 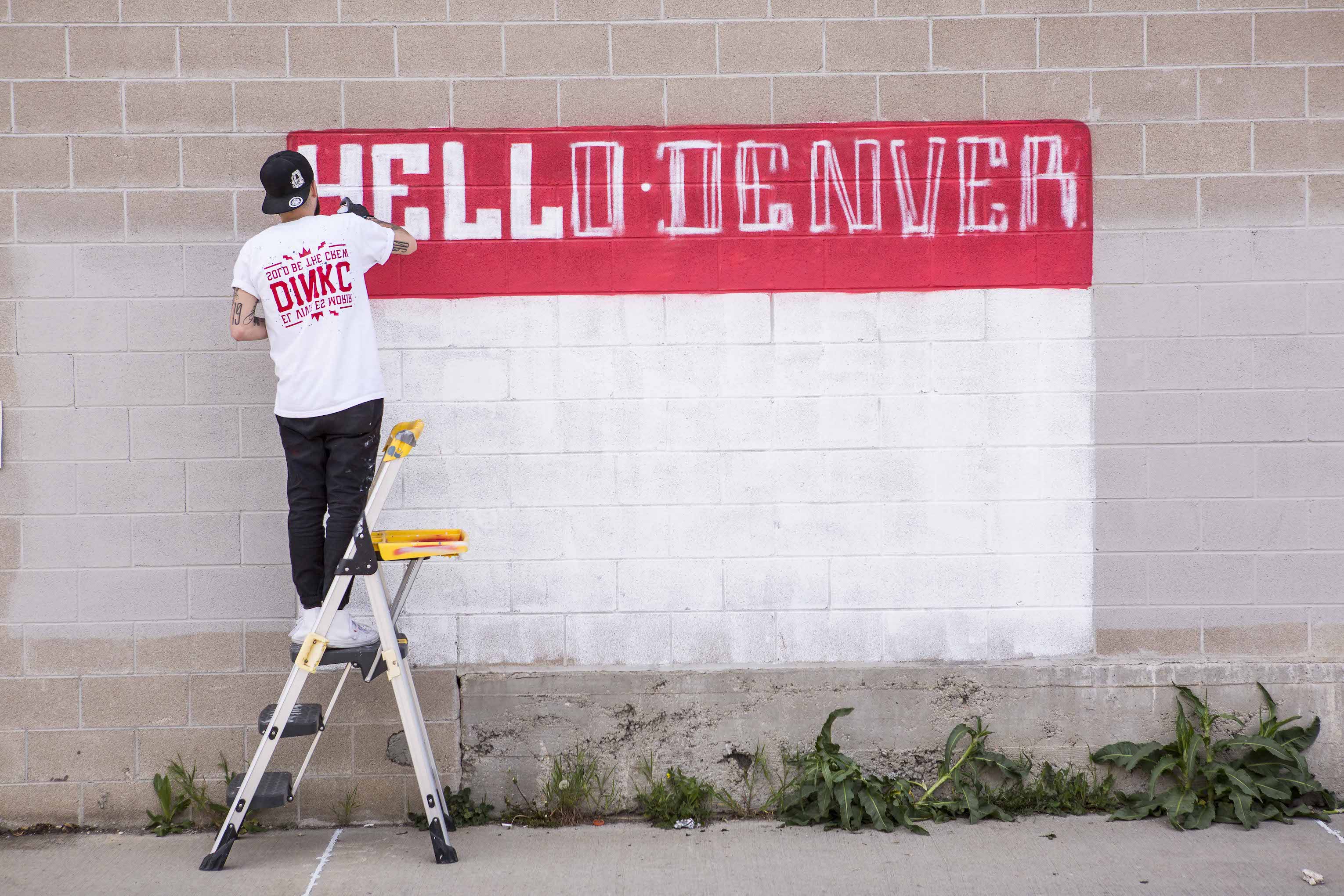 –
303 Magazine: Where did the moniker DINKC originate from?

DINKC: It started as a nickname growing up. I have three older siblings, and one of my older brothers always called me “Dink.” As I was getting introduced to graffiti, I decided to go with that but I added the “C” at the end, so it was “KC” — as an homage to my home town of Kansas City. But when I started designing professionally, it became “Designing Illustration ‘N Kansas City.” Then, when I moved from Kansas City, it changed to “Death Is Not Knowing Certainty.”

303: You have a very particular color palette. It’s obviously intentional, so why do you stick to the limited range?

DINKC: I’m partially color blind. I can see certain colors. I know red, I know gold. But when tones are close together, they look like one big color. Sometimes people will say “oh, look at that subtle highlight in that yellow part,” and I’m just like, huh. I also love bold, graphic marker work, which allows me to use few colors.

Red and gold both reference my heritage — gold, like Aztec gold. And red is part of the Mexican flag. I just don’t like green, otherwise, I might include it. My brand is hugely influenced by Mexican culture, but it’s also influenced by cartoons. Especially old school cartoons from the 1940s and ‘50s, like Mickey Mouse. I definitely do an homage to him, my “Dinky Mouse” which is rougher than Mickey. I try to make the characters my own, more squared and not as friendly. The simplicity of the old characters was amazing. I love how they can have so much expression using such simple linework. I’m trying to capture that simplicity but give the character life. Growing up in the ’90s and seeing all the cartoons like CatDog and Doug, where everything was so exaggerated — I take pieces of that as well, messing with aspect or orientation of the hands or bodies in mine. I like being playful with it, and never stop experimenting. If I see something I like, I try to make my character fit into that style, and if I don’t like it, I move on.

DINKC: I moved to Denver a year ago. I was in New York for close to three years. My fiancé convinced me to go there. I went out for a week and stayed for almost three years. I came out to Denver because my fiancé was originally from Denver and her family is here, and it was always in the back of our minds to come spend more time with her parents. The times we did visit Denver before we lived here, I loved the art scene. In NYC, I was so clustered and I needed room to spread out and expand on passion projects I have. It’s so saturated there, everyone’s an artist — or so they say. There’s definitely competition [here] but you just have to stay on top of that hustle, on top of the opportunities. Those who get up and do something will get something. [In New York] the whole scene moves at a faster speed, here it’s a little slower and KC is even slower than that. 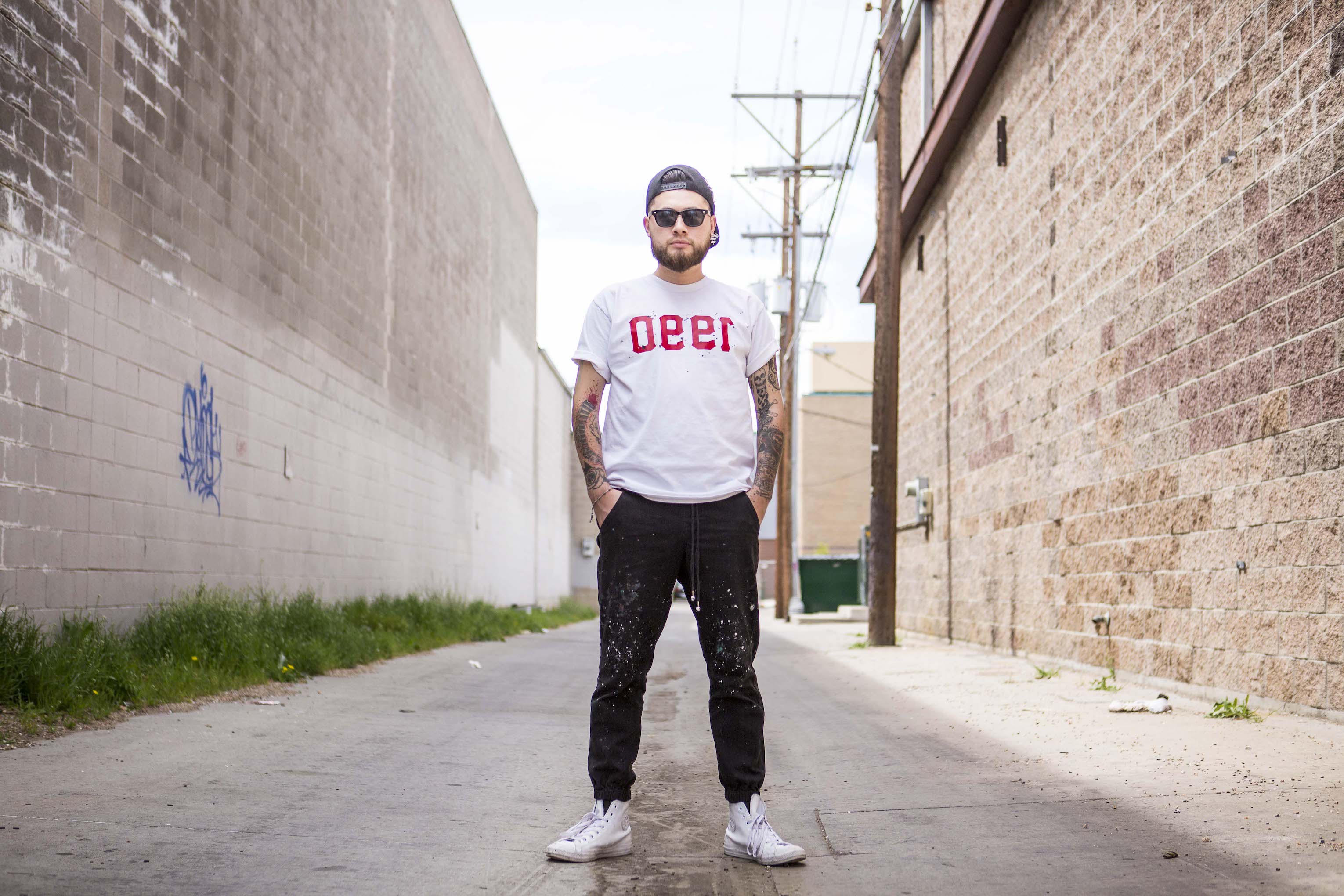 –
303: Do you remember a time when you realized you’d be a full-time artist?

DINKC: I’ve been drawing my whole life. At school — Kansas City Art Institute — I majored in illustration. My sophomore year I got a really cool internship at a local brewery and I was part of their design and marketing team. It was a lot of hands-on stuff, so I learned a lot of the business and marketing side from that internship and I applied that to my art. The first time I really branded myself and started offering services was my senior year (2012) and that’s when I did DINKC studios. So I’ve been doing it professionally since then.

DINKC: When I grew up in the graffiti scene, with my friends teaching me about black books — they always used markers. They taught me about all sorts of brands, but I always resorted back to Sharpie. So I use Sharpie paint markers for my canvases, either water-based or oil-based. Oil-based ones I use more for my smaller work, where there is a different texture and amount of detail. I work in layers now, whereas it used to just be black and white. I sketch everything out, outline it in a black marker, then add my color blocking. Then I re-do all my black line work to make it bold and add in white highlights. I finish by splattering and adding a few other small details.

I love working fast. That’s why I love live painting. I try to keep it as simple as possible when I do that, though. No splatters, generally, so people don’t get dirty who are watching or standing close by. Outside is strictly spray paint. It’s basically the same process there. Composition and negative-positive space balance are both really important to me. A lot of artists are amazing at executing things but they don’t fully think of the whole picture. They might work on a part of the piece that turns out great, but then it’s off center. My background as an illustrator comes into my work a lot, I have to make sure my composition makes sense and makes sense on the canvas or wall. That initial sketch usually takes me the longest because I have to make sure it’s exactly how I want, proportionally and everything. It has to be perfect. The main difference between my walls and my indoor pieces is the shading. 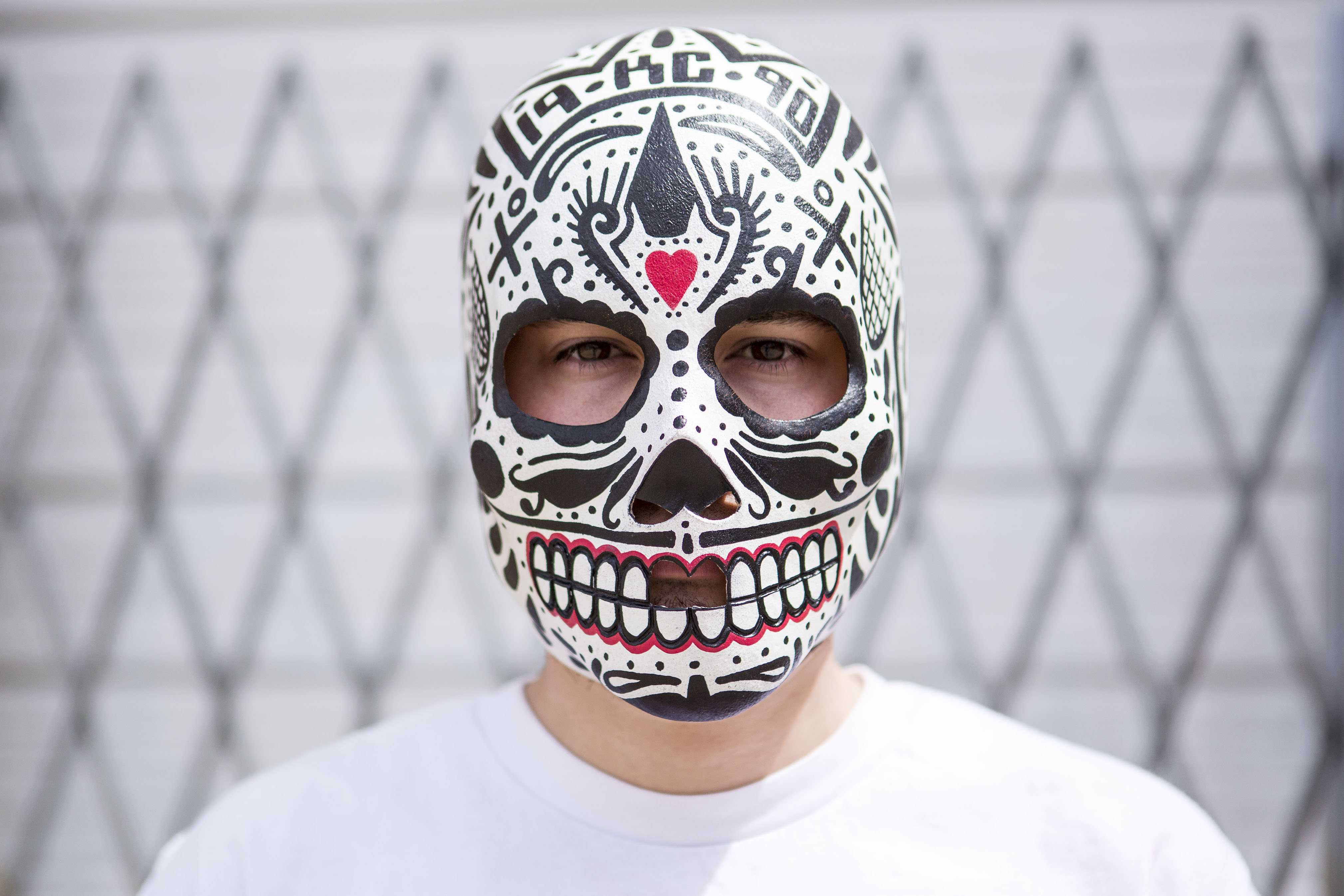 DINKC: I’d say it’s a bold, playful reminder of death, but that’s meant to make you remember to live.

Dia de Los Muertos was a big part of my upbringing. I was raised on that. Every year my family does a huge altar, and we decorate the whole thing to pay tribute [to loved ones] for two to three days. We just remember those who have passed, put out things they loved. We have a good time remembering but it also reminds us to live our lives. I see things from their life as “leave behinds.” Literally speaking, the last thing we leave behind is our skulls. So that’s how I take my art. These [art pieces] are my leave behinds, these are my skulls. Some of my friends ask why I’m always doing things about death. But I feel like I lead a better and more fulfilling life knowing that I will die one day, so why not live today the way I want to?

303: What’s something you like about the Denver art scene?

DINKC: The opportunities I’ve gotten here are more genuine and more curated than they were in New York. Here, I say ‘I do art’ and people say ‘ok, show me your work, let’s see what you’re like.’ I think that’s really cool, I have to prove myself. Earning your spot, earning your place, showing what you’re about and showing what you can do — then people ask you to paint and do gigs. I love it though, I love a good challenge and I know I can step up to it.

303: Have you collaborated with any local artists in the year you’ve been here?

DINKC: Yes, absolutely. I’ve worked with Balance, Mr. Mars, 84 Pages. And just recently, the street art crew I’m a part of — Solo Crew — we took on Mr. Mars, Shitty Kitten [Markham Maes], Mel CK and Balance [Ahmed Alwazzan] —  all Denver artists. This coming weekend there will be a roughly 20 artist show at Fice Gallery for Cinco de Mayo and it’s inspired by the game Lotería. Lotería is kinda like a Mexican version of Bingo. Instead of numbers or letters, Lotería has cards that have illustrations on them. Each person has a grid of 16 illustrations, and someone draws cards and shows them, and you match ones on your grid. It’s been passed down by generations. It’s the first time I’ve curated a show here, in Denver. So I’ve always wanted to curate a show and do it on Cinco de Mayo and really bring in more Mexican culture and educate people more about different aspects of it

303: Where’s your favorite area in Denver?

DINKC: RiNo, for sure. I’m usually here [in Centennial] working on weekdays. During weekends I try to go to as many art shows as possible, network, see people. I especially like going to The Meadowlark Kitchen. I’m down there all the time because they gave me one of the first opportunities in Denver to live paint on a First Friday, ever since then I try to be involved as much as possible. Last week I did a live event there, a Patio Battle, with Casey Kawaguchi, Shitty Kitten, Scot LeFavor, Patrick Kane McGregor and myself. In New York, I used to do art battles all the time, and I just love doing it — the crowd feeds me a lot of great energy. So I proposed that to Casey [owner of Meadowlark Kitchen] and he was all for it. I wanted to have artists that would give me really good competition and it was a cool event with a better turnout than I expected to be honest. I want to start getting more into curating and hosting for the Denver art scene, doing it my way, bringing myself to it. 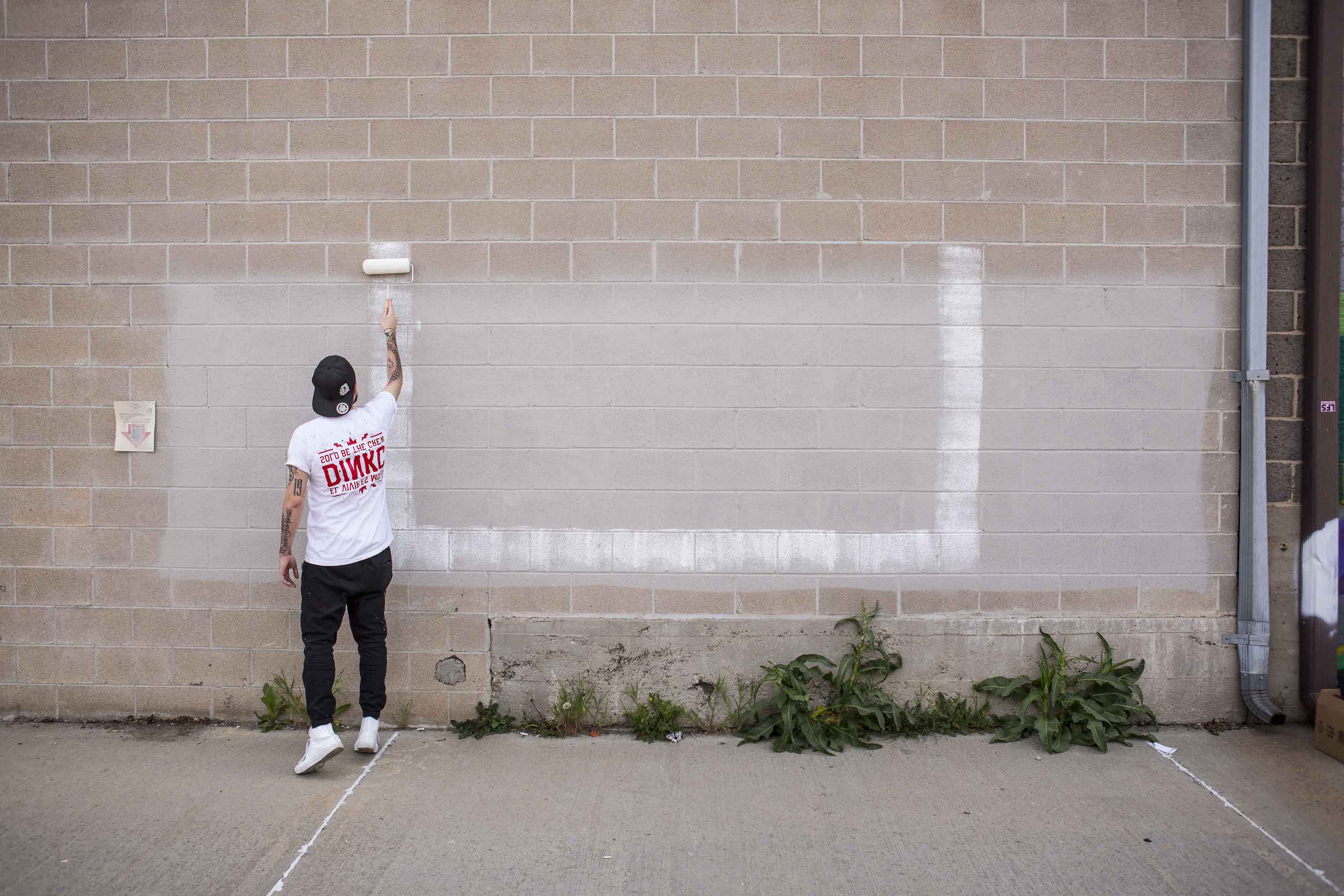 –
303: What’s something you do that not many people know about?

DINKC: I do work for Tech N9Ne. They’re one of my clients I create merch for. Also, I create bandanas and merchandise for CES Cru. I do a lot of stuff in silence that people don’t know about, just as a result of my commissions and customizations.

303: You’re obviously busy with art — in all its forms — but what do you like to do most in Denver when you aren’t working?

DINKC: Eating. I’m still moving around and checking out the scene. But since my fiancé is Korean, and has family here, they take us out to Korean BBQ. I obviously love eating at Meadowlark and I usually like ramen. And I’m always looking for good Mexican food. 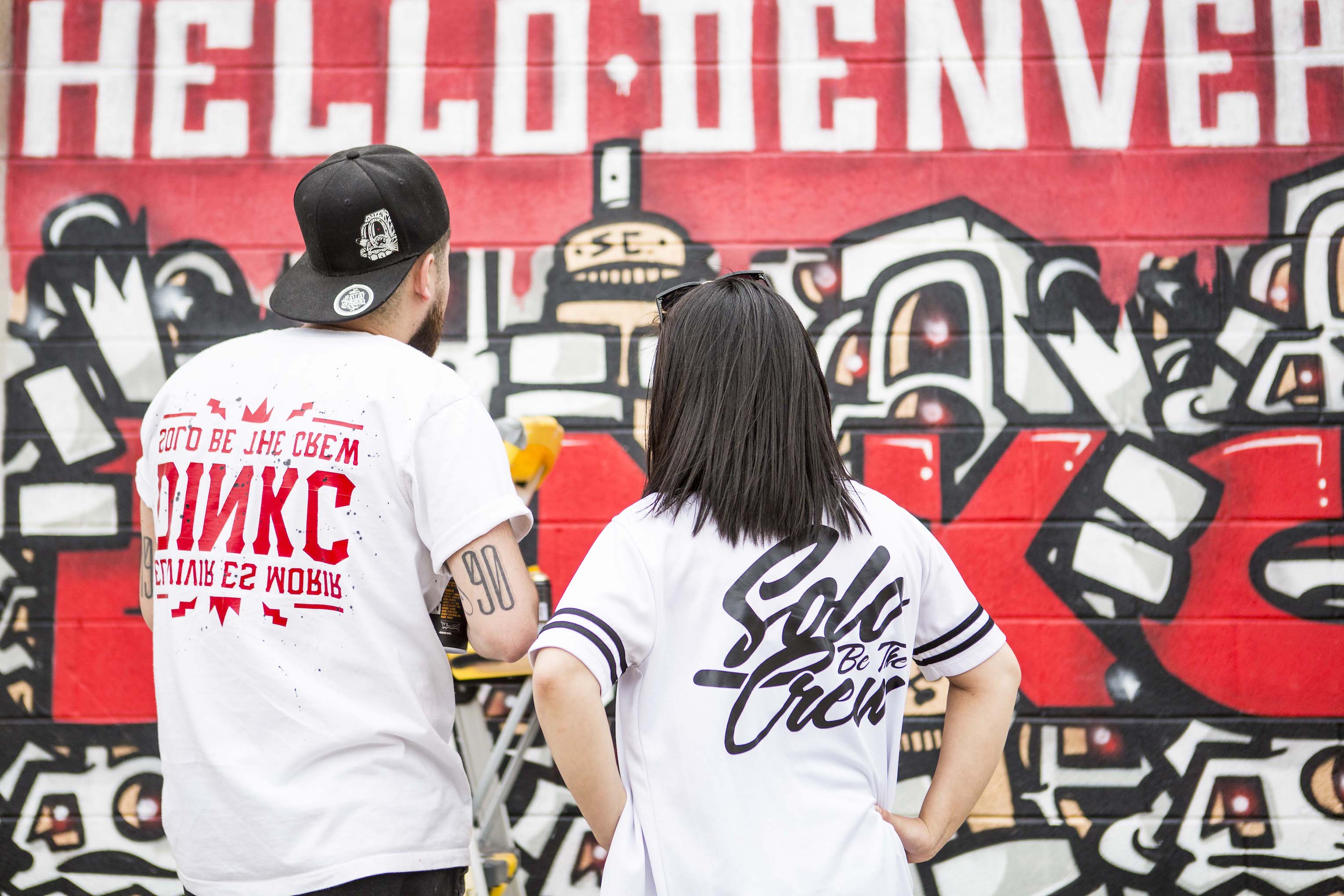 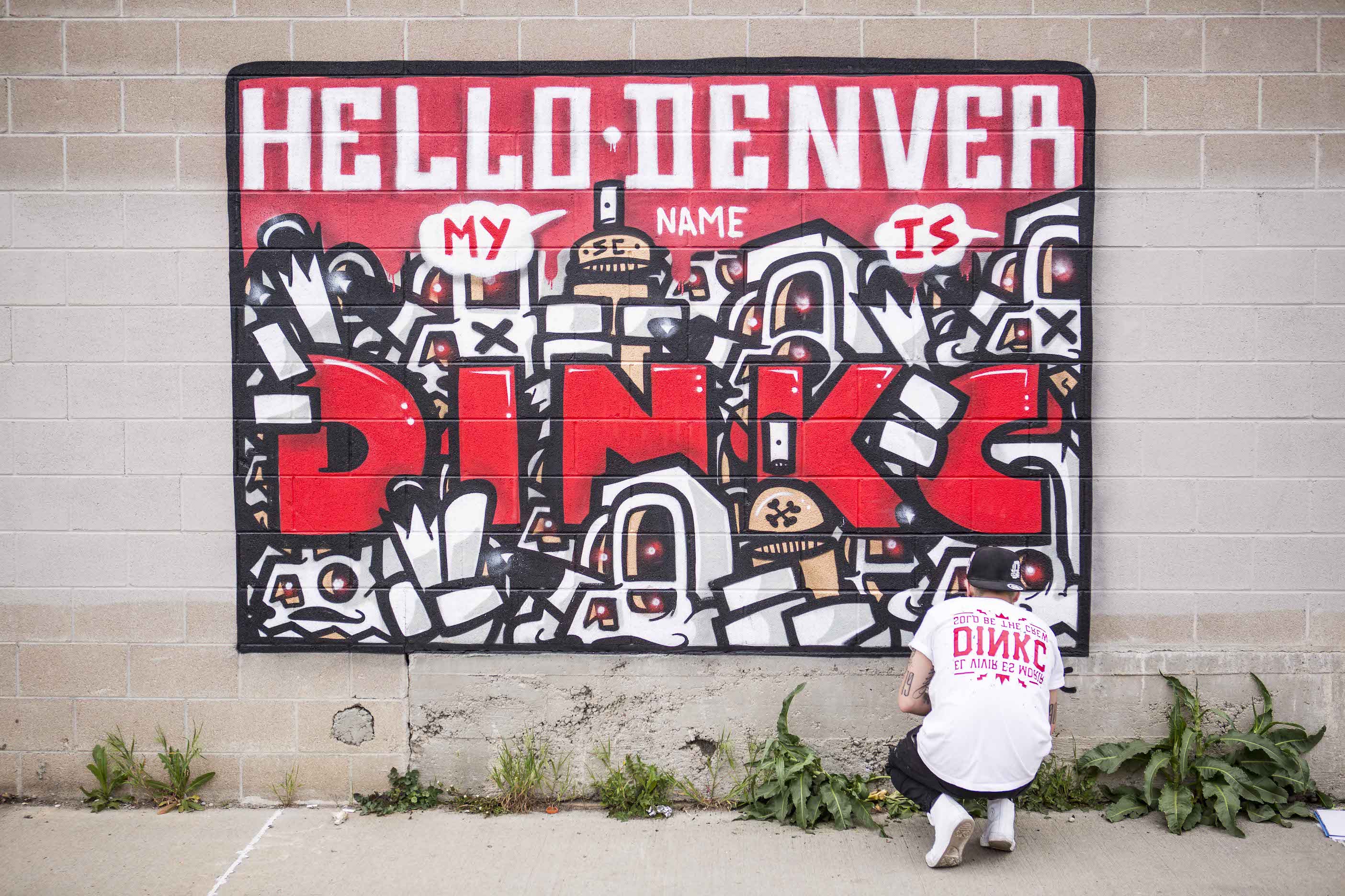