[Update, August 17 at 12:18 p.m. Tonight from 8 to 11 p.m., this wall will feature a projection in honor of Elijah McClain, featuring celebrities who are advocating for justice in his death. This includes Janelle Monáe, Jonathan Van Ness, Virgil Abloh, Tess Holliday and more. The community gathering and projection have been approved by the McClain family.]

Art serves as a tool for the oppressed, for the unheard, for the ones who have something to say but nowhere else to say it. The creation of art is often associated with humanity’s most triumphant moments — the Renaissance for instance. But the creation of art also chronicles the deepest struggles, battles, revolutions and betrayals in history. The latter is where we currently stand, amidst a week-long effort from protesters to bring justice and equality to black Americans (and other people of color). So what do local artists have to say about it all?

READ: How to Be an Anti-Racist in Denver

Deep Space Drive-In (DSDI) — a locally-based multimedia design company founded by Travis Powell and Geoffrey Dohrmann — is giving artists a public platform to communicate their thoughts and reactions to current events. And it’s a huge platform in a prominent location — the side of a building on the corner of Park Avenue and Curtis Street in downtown Denver. With a projector and the desire to fuel social activism, DSDI just gave Denver-based artists a soapbox to stand on.

This isn’t the first time that walls in Denver have been transformed using a projector. For the last few years, RiNo’s Side Stories event pairs a handful of digital artists with walls in order to create a scavenger hunt of animated murals. Other prominent projector projects include Night Lights, the projection mapping on the Daniels and Fisher Tower on 16th Street Mall and SUPERNOVA, the annual digital animation festival. But this new weekly “rooftop projection” project brought to the city by DSDI is not constrained by the same limitations that those events and organizations must operate under. It’s a little rogue, and the current output has been highly opinionated.

The first “rooftop projections” took place on Friday, May 29 when the protests were only beginning. Artists were contacted by DSDI for that inaugural night, but the hope is that artists will direct message DSDI on Instagram for a chance to show their work through the projector in the future. The second rooftop projection occurred on Monday, June 1, and moving forward, the plan is to project new work each consecutive Monday.

“Our feeling was that we were not doing enough to assist breaking the cyclical nature of systemic racism and injustice by sharing on traditional social media platforms,” the duo remarked. “We felt that the best thing we could do as allies was be a platform for artists and community leaders that needed to be heard while the dialogue of disenfranchisement was this active.”

LeFebre’s contribution on Friday night was a written statement, not a poem like you might expect. It read:

If you have any lasting legacy in this country, on this continent, it is genocide and racism. The architecture of both live in your blood and bones. You have the blueprints to anti-blackness in your DNA. Your fear of immigrants and brown bodies on their ancestral lands in as heirloom. You cannot enslave a people and then hide from their rebellion. Racism in your invention. It is also your burden to undo. We, BIPOC, will not conform to you comfortable and collective ideals of what our “progress” looks like in your eyes and minds. The white imaginary is your mental illness. We don’t want to be like you. We don’t wish to acquiesce to your norms or ways. Whiteness if your construction. Violence is your inheritance. You have the tools to dismantle all of it. Get to work or prepare for insurrection.”

About this contribution, LeFebre remarked, “I decided to participate because I believed in the idea and medium’s ability to contribute to the collective conversation we are having. Art is a powerful vehicle for dialogue and the passage I wrote is the straightest shot I have right now.” He added that as the state’s poet laureate, “I feel compelled to use language as a tool for change.”

LeFebre’s statement was not alone in its sentiment. Several pieces directly commented on the murder of George Floyd by police in Minneapolis with their own visual interpretations. Others addressed broader issues, like the series of illustrated posters created by DINKC which address police brutality, injustice, the Black Lives Matter movement and Mexican/Latinx issues. 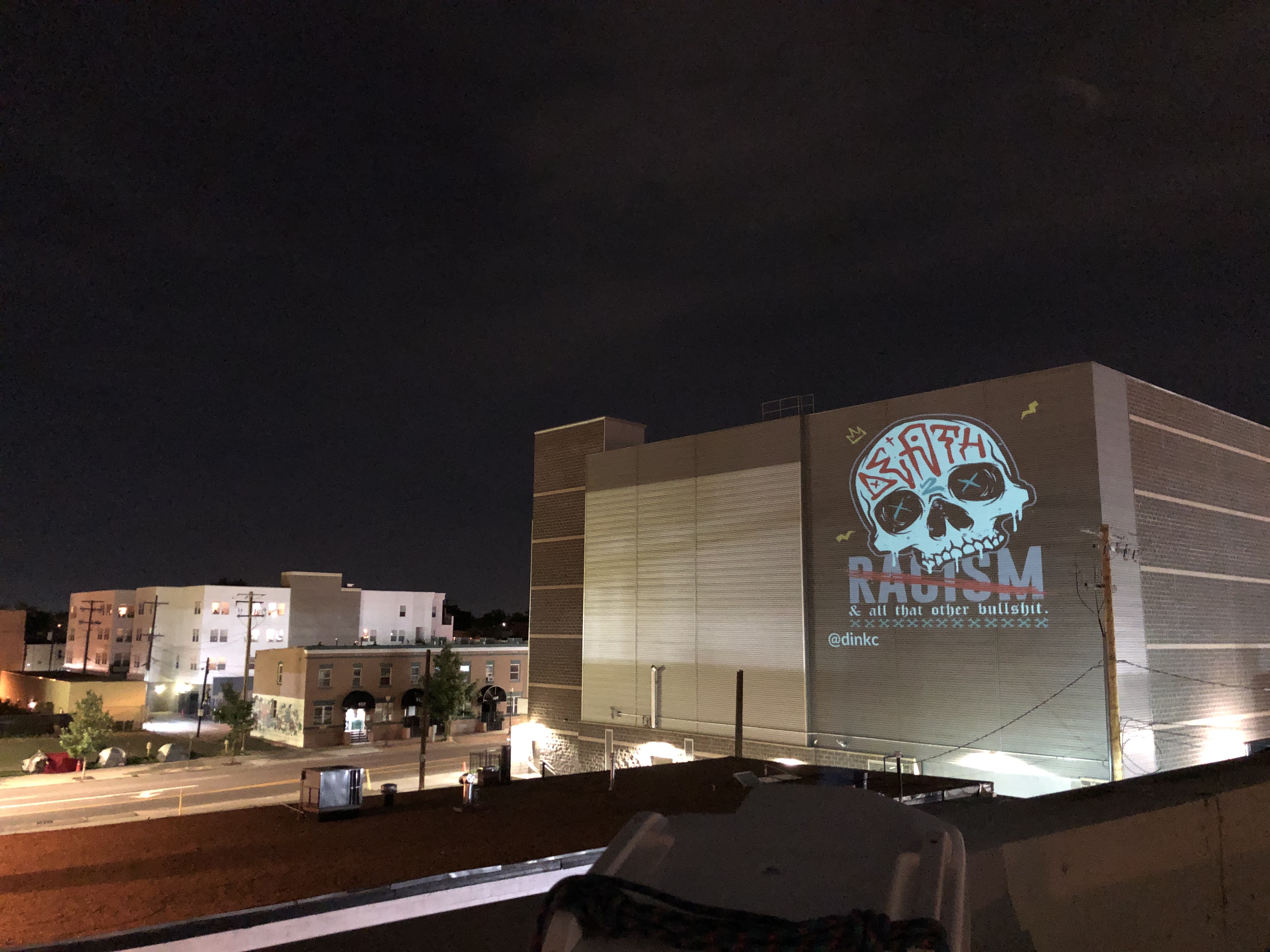 He gathered inspiration from historic quotes, things friends and family have said, symbols and illustrations from his own personal library to create the posters. He was particularly influenced by artists like Jose Guadalupe Posada “who used their skills, voice and platform to create something unique with a strong message, dope design and shared it with the public” DINKC explained. After receiving such a powerful response from the DSDI projection of his posters, he started offering free downloads of them from his website.

When Dohrmann and Powell decided to offer artists this opportunity, they said “we never planned on our platform being political but rather a conduit for [the] expression of ideas from those aiming to better humanity as a whole.” The message from LeFebre to White America was “particularly moving to us,” the duo commented. “The stern message of complacency breeding insurrection felt powerful to show on our platform and is among the reasons why we believed we should continue doing our projections.”

DSDI’s new weekly rooftop projector project will occur on Monday nights from about 9 p.m. until midnight to “keep the dialogue active on a weekly basis.” They encourage artists and creatives to reach out to them and share a perspective. The only limitation is that no sound can accompany the projection. “We extend a call to those who believe in our platform,” Dohrmann and Powell concluded. “We are here for you, we support you.”

All photography by Geoffrey Dohrmann