The evolution of RiNo from a manufacturing neighborhood to an artistic haven has sometimes been a touchy subject. With the recent controversy at ink! Coffee on Larimer Street—as well as other tiffs between long-standing neighborhood establishments like Joe’s Liquor and newcomers like Denver Central Market— the budding arts district must find ways to discuss and address those woes without stepping on toes or pissing everyone off. Part of these efforts to equalize the area focus on non-exclusive art activities— or activities that are free and open to the public. These events are organized to pay homage to the creatives who made the neighborhood such a desirable location to live, work and play. One of those directives is Side Stories— a 10-day short film festival on the exterior walls of some of RiNos buildings. Ten Colorado video production groups crafted the films, made in the theme of highlighting the surrounding neighborhood and its layered history.

READ: A 10 Day Short Film Festival Will Play Outside on RiNo Walls Next Month

Since Wednesday, February 21, 2018, these short, looping films light up from 6 to 10 p.m. specifically in East RiNo from Broadway to 36th Street and between Blake and Larimer Streets. The last day to see them will be Friday, March 2, 2018. Though the projected films are silent, an audio supplement with artist statements, music and other audio accompaniments can be played with a smartphone as people move from projection to projection.  The creators of Side Stories included block-by-block suggestions for where to eat or drink along the way in this audio tour, providing a much-appreciated boost to local businesses during the doldrums of February.

With only another five nights to catch this unique film festival, interested viewers need to head down to RiNo with headphones, the Side Stories audio tour on their smartphone and a sense of adventure. The audio tour is easy enough to figure out— just go to the Side Stories website on your mobile device and hit the option at the top that reads “Click Here for Event Map & Audio Tour.” Even if short films are not your cup of tea, the contextual significance of each film might give you a new perspective on the trendy RiNo area, or at least be pretty to look at while you stroll through the streets. 303 Magazine talked to a handful of the participating artists about their films and their involvement in bringing this new festival to fruition. 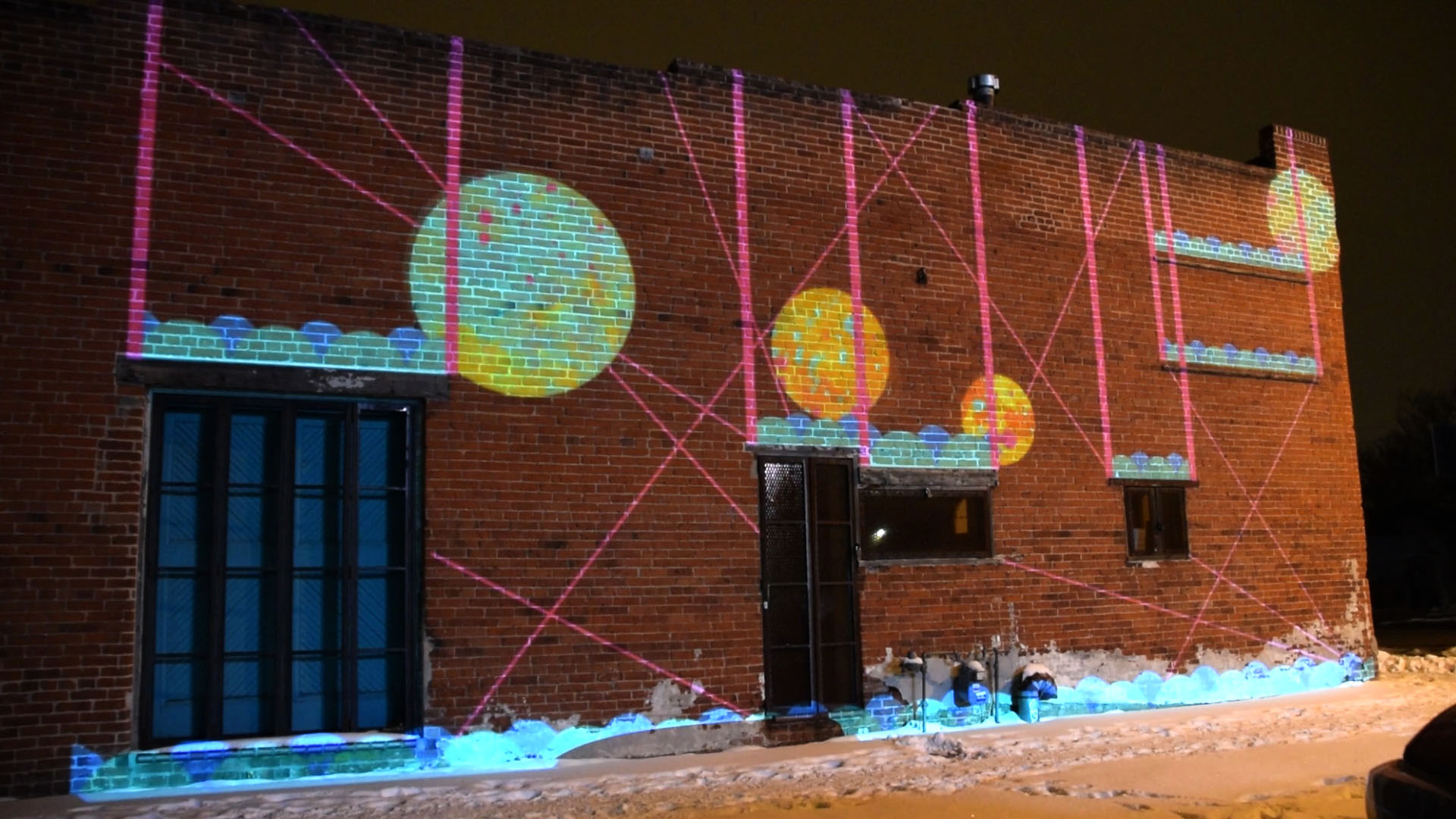 Photo courtesy of Side Stories

Studio Hippo consists of three full-time members— Cameron Walker, Auston Wilson and Natalie Einterz. Though they’ve never projected on outside walls before, the team received help from the well-known local video production company CEAVCO in order to choose the best colors and figure things out like how light reflects off different building surfaces.

“Our main challenge was making sure that our animation was going to line up perfectly with the architectural details of the wall,” Walker commented. “But CEAVCO provided us a template of the space, and from there, we were able to create an outline for our animations. We were relatively confident it was going to work out, but after seeing it live last night, we’re beyond excited about the final product. Seeing our artwork projected outside—at such a large scale—is incredible.”

Hippnosperience says “thank you” to the people who made RiNo what it is today. “We are so humbled and inspired by all of the artists and organizers who transformed RiNo into such a vibrant community, so through this series of experimentations, we first and foremost want to say thank you to all of them,” explained Walker.

READ: The Best Art We Experienced in Denver for 2017

But the team at Studio Hippo doesn’t want viewers to take their film too seriously. Walker reported, “whenever we create any animation, our primary goal is to produce something engaging and entertaining in hopes of spreading happiness and joy… Throw on some tunes and dance with our drawings. Have fun with our Hippnosperience!” 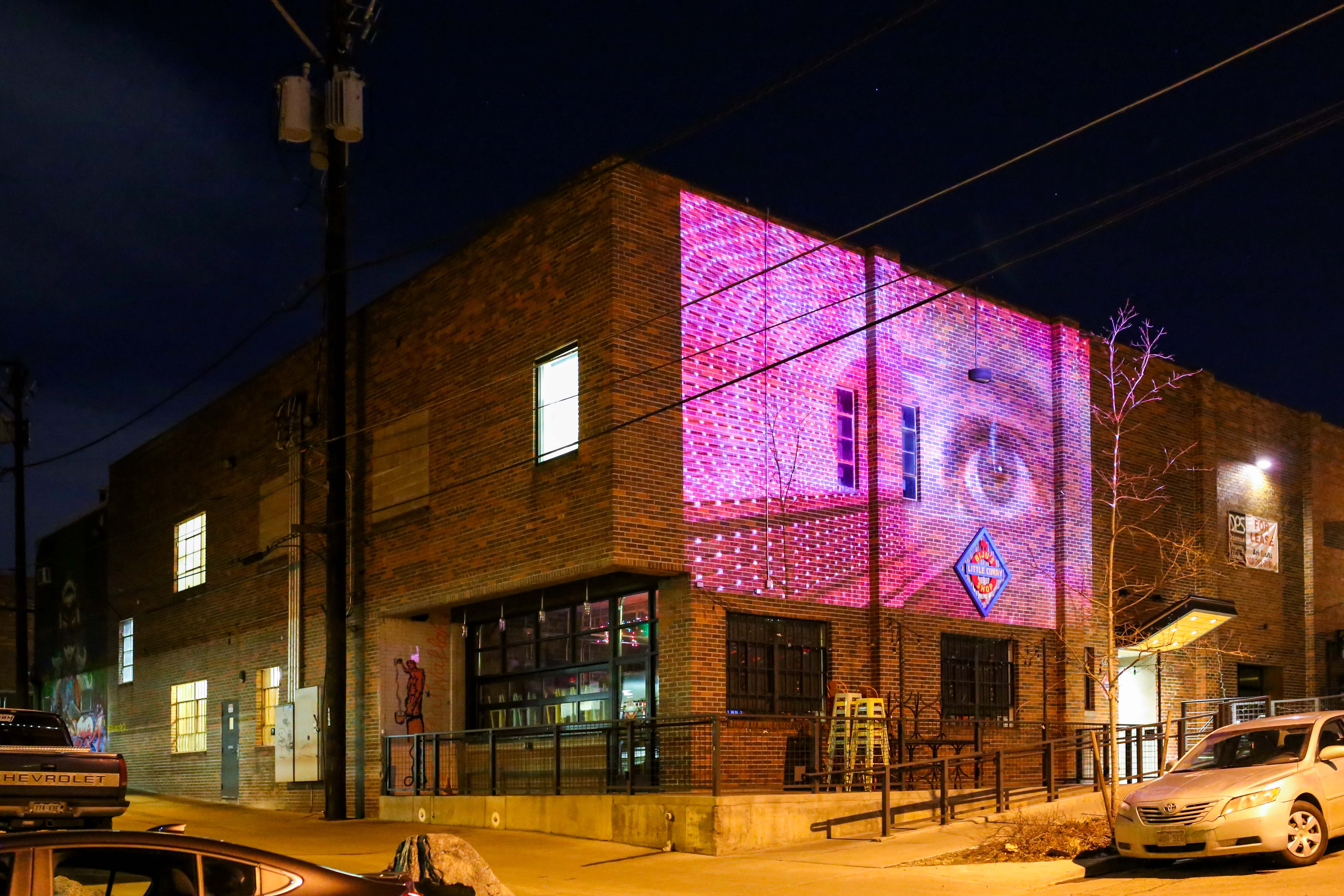 Side Stories marks the first instance of outdoor film projection for the team at HaveyPro. President, producer and director Jim Havey remarked “Doing a film without sound provides a challenge, offset in part by the novelty of projecting large images onto a building. A creative project is always challenging and it takes a lot of work. The quote from iconic graphic designer Milton Glaser says it for me, ‘art is work.'”

To enhance the experience of this film, HaveyPro included a music track that plays under and following the artist statement on the Side Stories audio accompaniment. “The Awakening theme was inspired by the rich industrial history of the RiNo area and today’s rapid transformation to a center of art, entertainment and creative business,” Havey explained. “I hope people appreciate and enjoy the uniqueness of this first-ever event in Denver and the creativity and diversity of expression they will see at each location.” 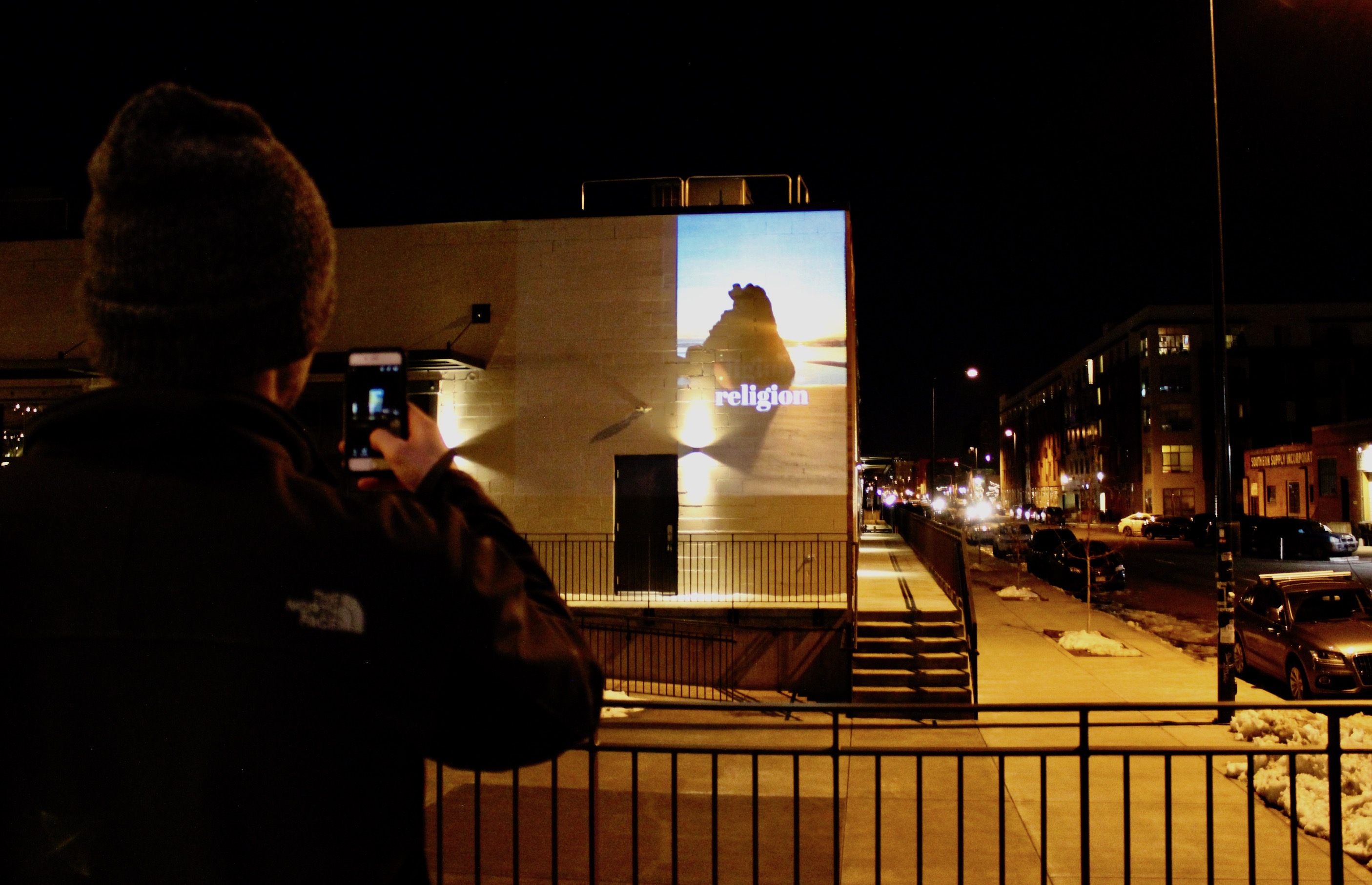 Mighteor is a 10 person full-service production company with the junior videographer Jamon Tolbert in the lead on the visuals and the senior animator Hayley Anderson editing the project for Side Stories. Their film is titled Manifesto and delves into the #TimesUp movement in only a few minutes. The production company mostly creates videos for today’s media channels (i.e social media) but no matter what they are making videos for, they have one goal: to make videos that have an impact.

Manifesto serves as a testament to the women who have told their stories in recent times, leading to a movement where others feel safe to tell their stories too. “We are living through one of the most important windows of history in film and production. We as an industry are having an important conversation about the treatment of women. As a crew, we are 50 percent women and 30 percent people of color. This is our DNA. We believe production can be diverse and vibrant and welcoming for women. And Manifesto is an embodiment of that. It speaks to the idea that we all have the right to tell our story. And it’s about time,” Elizabeth Giorgi from Mighteor commented.

READ: 30+ People on Why They Participated in the Women’s March

Like many of the other groups involved in Side Stories, Mighteor has never done a similar outdoors projection. Even with the new terrain, they stepped up to the plate in many ways. Not only are they taking the opportunity to discuss issues they see as important, they are aware of how to spread their message in today’s world.

“We wanted to embrace just how ‘Instagrammable’ the entire RiNo neighborhood can be. Thanks to the murals and public art that is already there — people are always snapping a pic for their social media. As a team, we decided that we wanted to make something that wasn’t just beautiful, but that fit in with that theme and would be easy for people to capture on their smartphones when they come to visit,” explained Giorgi.

If you have any questions or comments about Manifesto, Mighteor encourages discussion and interaction with their team. “Our crew is so excited to be part of this project. And we are always open to having a dialogue on Instagram. We can be found at @mighteor” Giorgi added. 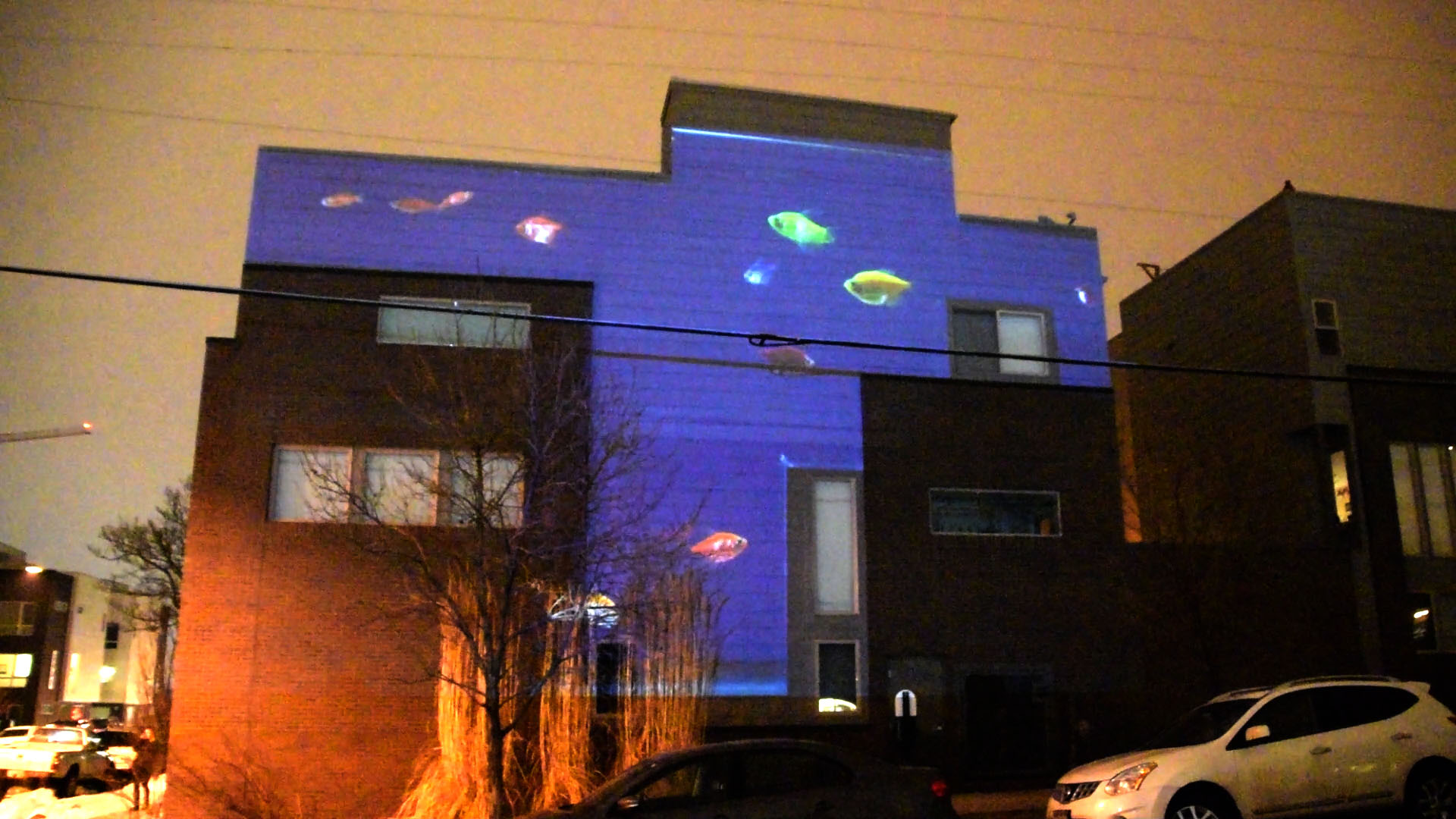 Photo courtesy of Side Stories

Futuristic Films has focused on telling stories since 2007. From feature documentaries to eye-catching installations in Times Square, they “mix art with logic” according to their website. With their office just down the block from the location of their Side Stories film, Futuristic Films decided to gain inspiration from the daily occurrences between walkers-by and their office. Titled Think Tank, the short film changes offers a surrealistic view of fish swimming in Caribbean-esque water, surrounded by an urban landscape and juxtaposed with the landlocked seasonality of RiNo and Colorado, especially on the cold mid-winter nights.

“Ultimately the shape of the wall inspired us to create something colorful and vibrant. Often times people walk by the window at our office and kind of peer through the window, we often stop and watch them as well. It brings up the question of ‘who’s watching who.’ We wanted to create a piece of art that potentially inspired that question,” Will Gardner, one of the employees of Futuristic Films commented.

Their inspiration— namely that awkward moment when you look at yourself in a window and notice someone on the other side— provides a novel and intelligent take on the consequences of mass surveillance while staying away from the dystopian feeling of stories like 1984.

“We are hoping people are able to stop and gaze at the wall for a bit, hopefully surprising them and perhaps even putting them in a bit of a meditative state. Hopefully, it inspires discussion and meaning for what we created,” Gardner explained. “It’s awesome that the Colorado Film Office and RiNo Arts district is spearheading projects like this.” 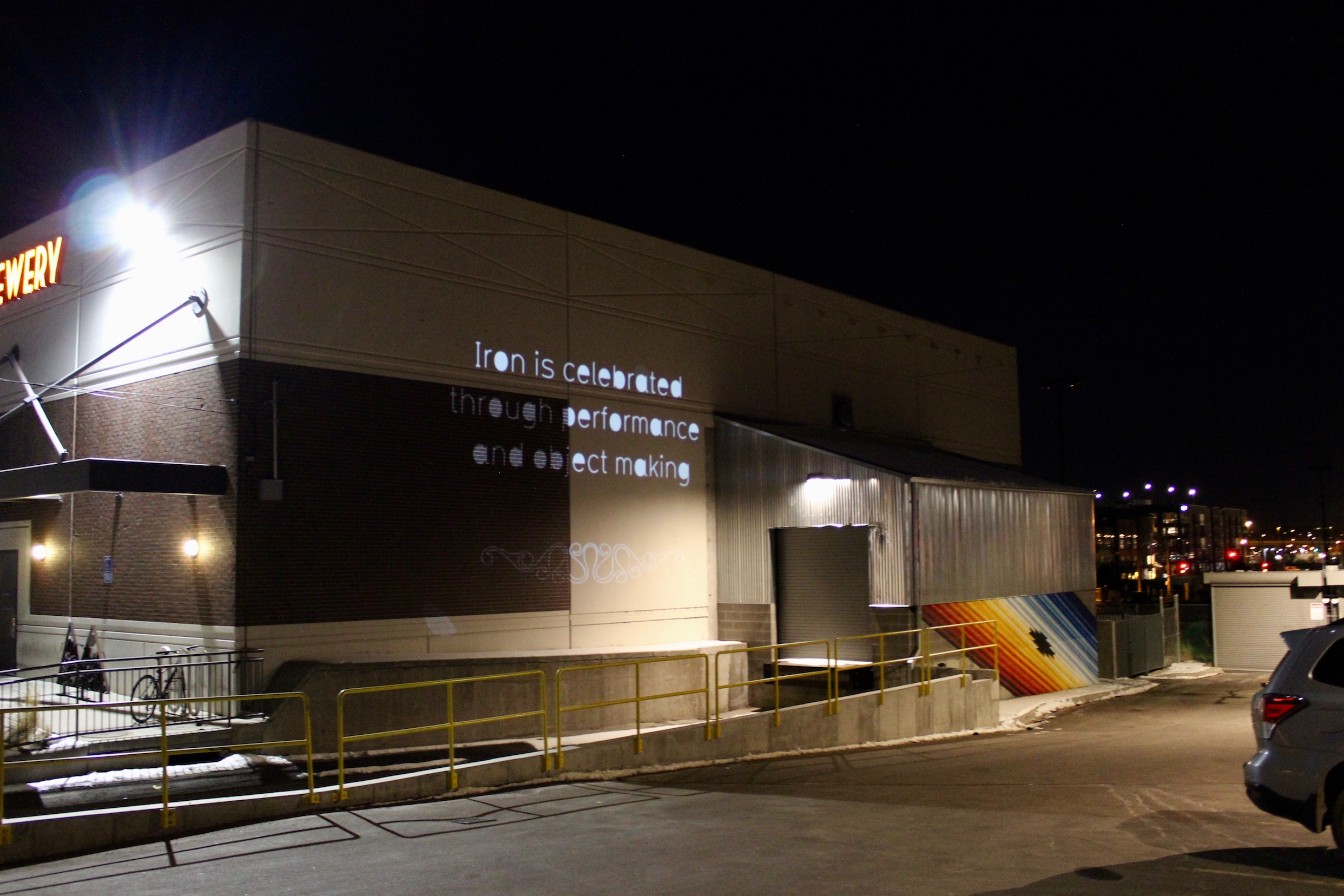 The main team behind this film is Rian Kerrane and her student Scottie Burgess. Kerrane is the professor and area head for the sculpture program at CU Denver and Burgess is an associate member to Pirate Contemporary Art and graduates with a second degree from CU Denver College of Arts & Media this spring. He has shown work publicly in the past, including commissioned pieces by the Downtown Colorado Springs Partnership and the Museum of Outdoor Art.  Kerrane’s involvement with the artistic community in Denver goes back almost two decades, with longstanding partnerships with Ironton Studios and Gallery and a persistent presence in the ironworking community with nomadic foundry events.

READ: RiNO Is Giving Out “Appreciation Cards” so Artists Can Drink Cheap

“When I first arrived in Denver, RiNo is where I exhibited, socialized and engaged with all the regional artists who frequented Ironton Studios and Gallery. I met my husband there,” Kerrane admitted. “When I heard the call to conceive a film that reflected the River North Art District region of Denver I immediately wanted to use the moment to record the 12 years of casting metal with our CU Denver nomadic foundry at Ironton, and the Dry Ice Factory, the 28th and Blake Street Station.”

With clips from news footage, artists’ archives and other community documentation, RiNo iRon honors the people in Denver committed to iron casting and the people who appreciate the work. It’s not only informative, but it’s also emotional and visually enticing (who doesn’t like staring at molten metal?)

“In the 15 years teaching sculpture at CU Denver I have worked alongside many budding young artists, all who have contributed in some way to the making of this film, RiNo iRon. The work includes footage from several generations of students and artists involved in the collaborative process of casting iron. Sharing visuals of our ability to pour molten iron at these venues is a celebration of RiNo as a place where creativity exploded, with low rent industrial spaces, attracting artists, much as the Casa Bonita Art District in Lakewood is doing today. The film, RiNo iRoN, features documentation from several sources, and pays tribute to the audience, the casters and all those drawn to fire and attracted to molten metal.”

This is not the first time Kerrane and Burgess have created an outside projection, including pieces in Charlotte, North Carolina as well as Lauri Lynx Murphy’s Capsule Gallery locally. They welcome comments on RiNo iRon on their  Facebook page.

The other video production groups participating in Side Stories are listed below:

Visit the Side Stories website for more information, visual maps and audio tours.