30+ People on Why They Participated in the Women’s March

On January 20, 2018, thousands of women, men and children gathered at Denver’s Civic Center Park for the Women’s March in Denver. The march was a part of a national protest that is celebrating its one-year anniversary. Everywhere from New York to Los Angeles saw a huge turnout that rivaled last year (although the official count for Denver is still in the works). In Denver, the crowds came out in droves to support a range of issues including women’s reproductive rights, equality and to advocate and defend marginalized groups. However, this year’s march took a look inward and focused more on the intersectionality of feminism. Although the turn out was still largely white, the organizers gave diverse Denver groups a platform through a steering committee and a large stake on the speaker schedule — although some admit that there’s plenty of room for improvement next year.

READ: Denver’s Women’s March Aims to be More Inclusive and Focused in 2018

But for many that did not attend, a question has lingered: ”Why did so many people march?” We spoke with several attendees to get their thoughts on why they participated. Read on to get an understanding of the motives behind the movement and feel free to leave your comments about the event below.

“Just coming and seeing all the people that were here, we felt less alone.” – Bill Herber

“This is something that all families, I think, should be participating in. It’s how we can have a real voice in our government by getting out and making ourselves visible. And it’s our responsibility as parents to teach that to our children.” – Eugene Howard 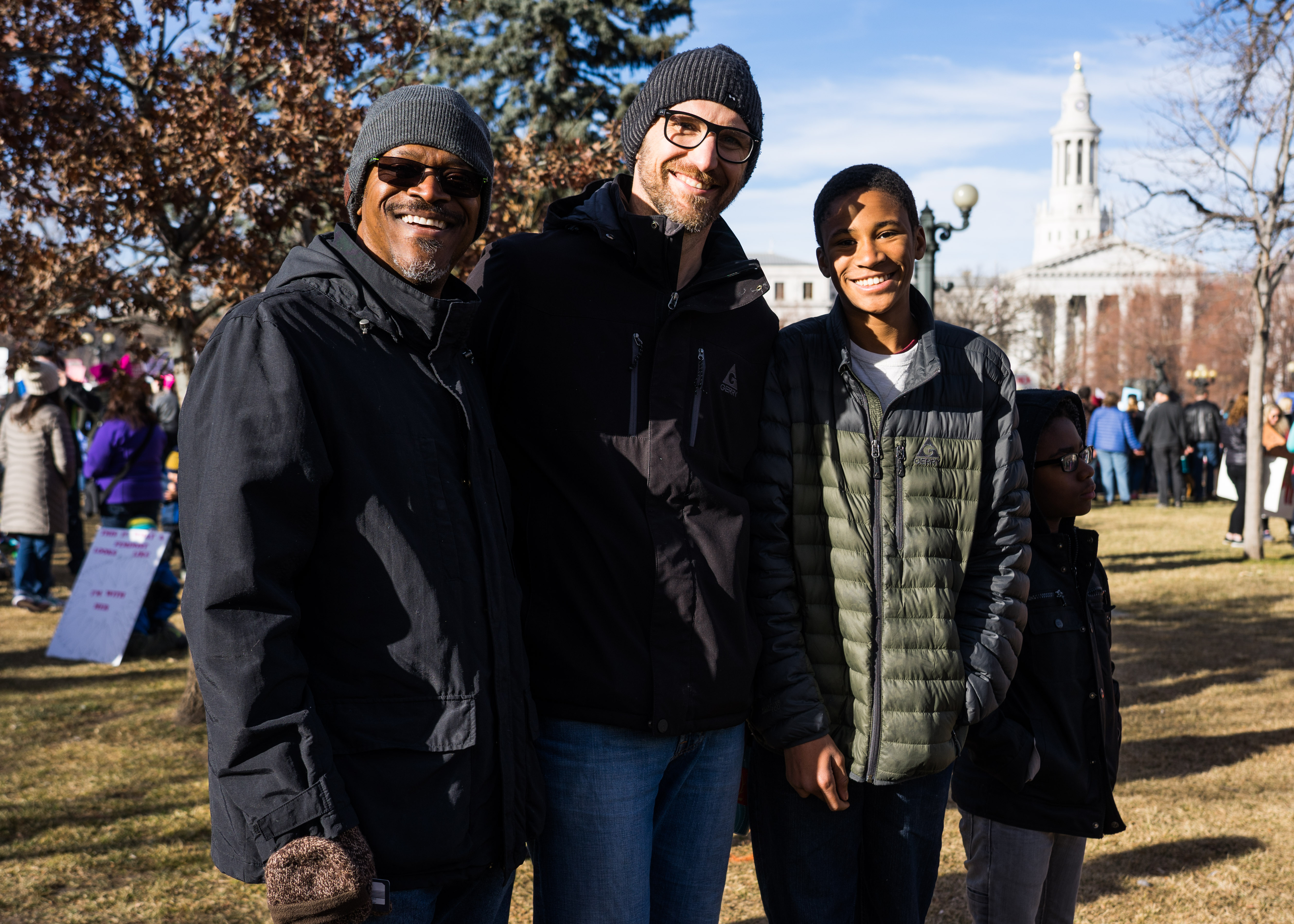 Eugene Howard and his family at the march. Photo by Brittany Werges.

“I am here because I believe that this is the beginning of the end of women being treated without respect.” – Susan Helprin

“It’s a peaceful but powerful way to speak up for those who cannot, and to show the world that kindness can really change lives.” – Trilce Zegarra

“I think that [the #metoo movement] is a great concept and it’s a platform for women to feel comfortable coming out and talking about their experiences around sexual harassment. It’s creating conversation. And I hope that policy comes out of it and there are actually things that are done about it.” – Lexi Sliva

“I’m marching today just because I feel like these are rights that are really important to not just women but everybody. So we just can’t stand for the oppression of the tyranny from our current regime. Over 50 percent of US citizens didn’t ask for this, and 100 percent of us are suffering.” – Jon Lorin

“Were here to show the person in office that we won’t stand for cruelty.” – Jessica Hahn

“Sexual assault is a serious issue in our society, and all of its different forms that seem to affect every single person one way or another. And so what we want to be able to do is show the pervasiveness of it and that it’s time to say no. Time’s up. We’re done.” – Laura Richards 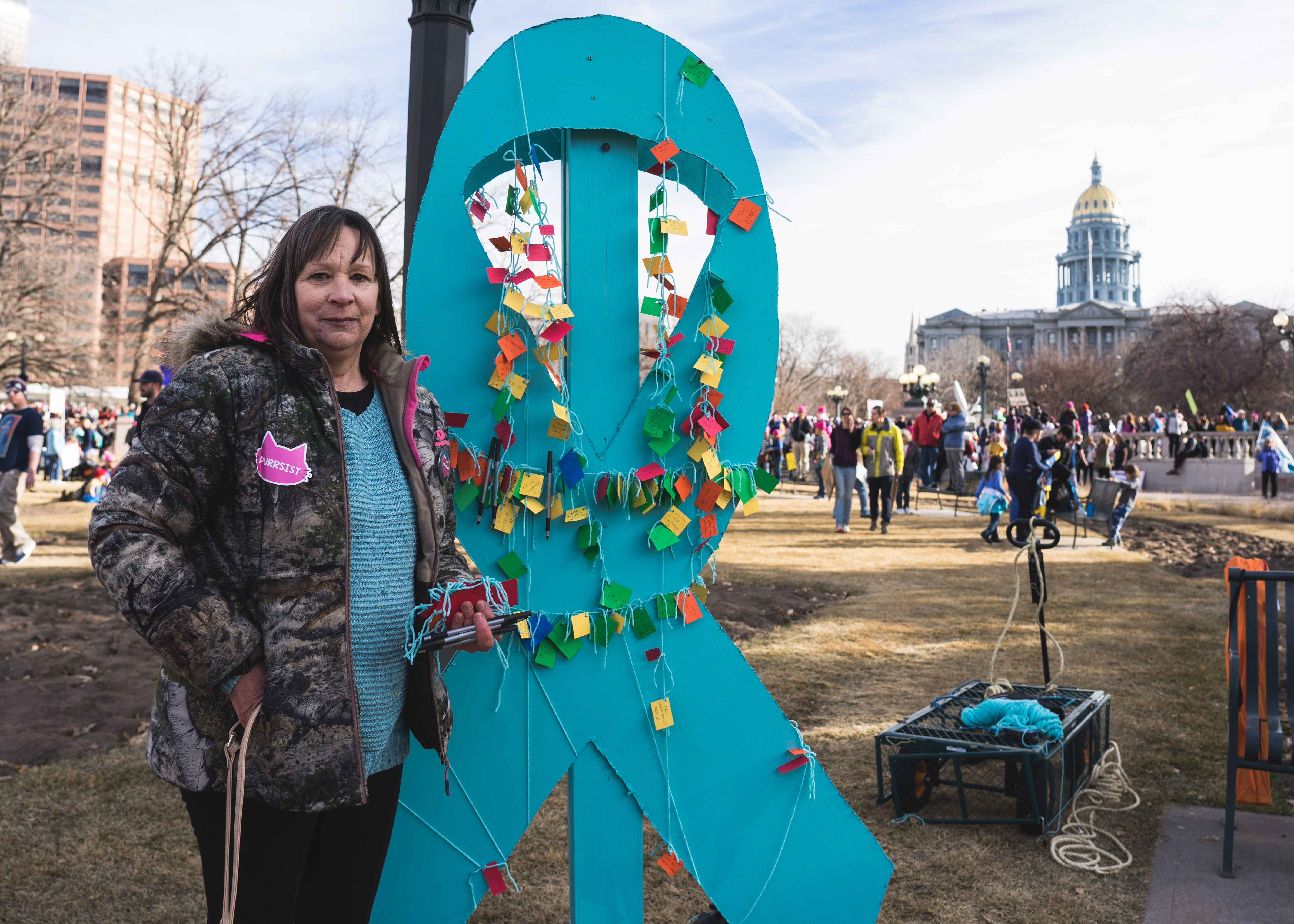 “I’m marching because my generation is the next generation. I want to live in a world where people don’t have to worry about being deported, because I honestly thought we left that in the past.” – Mia Frederico, age 13

“I’m here because I’m really concerned about the deregulation of laws that protect our land, air and sea. Cutting regulations is fine to a certain point. They’re talking about using nuclear weapons and that also concerns me because it threatens the entire planet.” – Colleen McGovern
–
“We’re here representing the oppression of Native women — the missing and Murdered Indigenous Women of Canada, America, Mexico Central America, South America. Even on the islands in Hawaii and New Zealand. Indigenous women are more likely to disappear 10 times faster than any other race. And it is not being talked about. There is no awareness. The authorities are not doing anything to stop it or prevent it. So we’re also here to raise awareness and show the world that we are rising up so that we can support our own women. So that our young girls don’t have to worry about being taken. ” – Eden Nicole 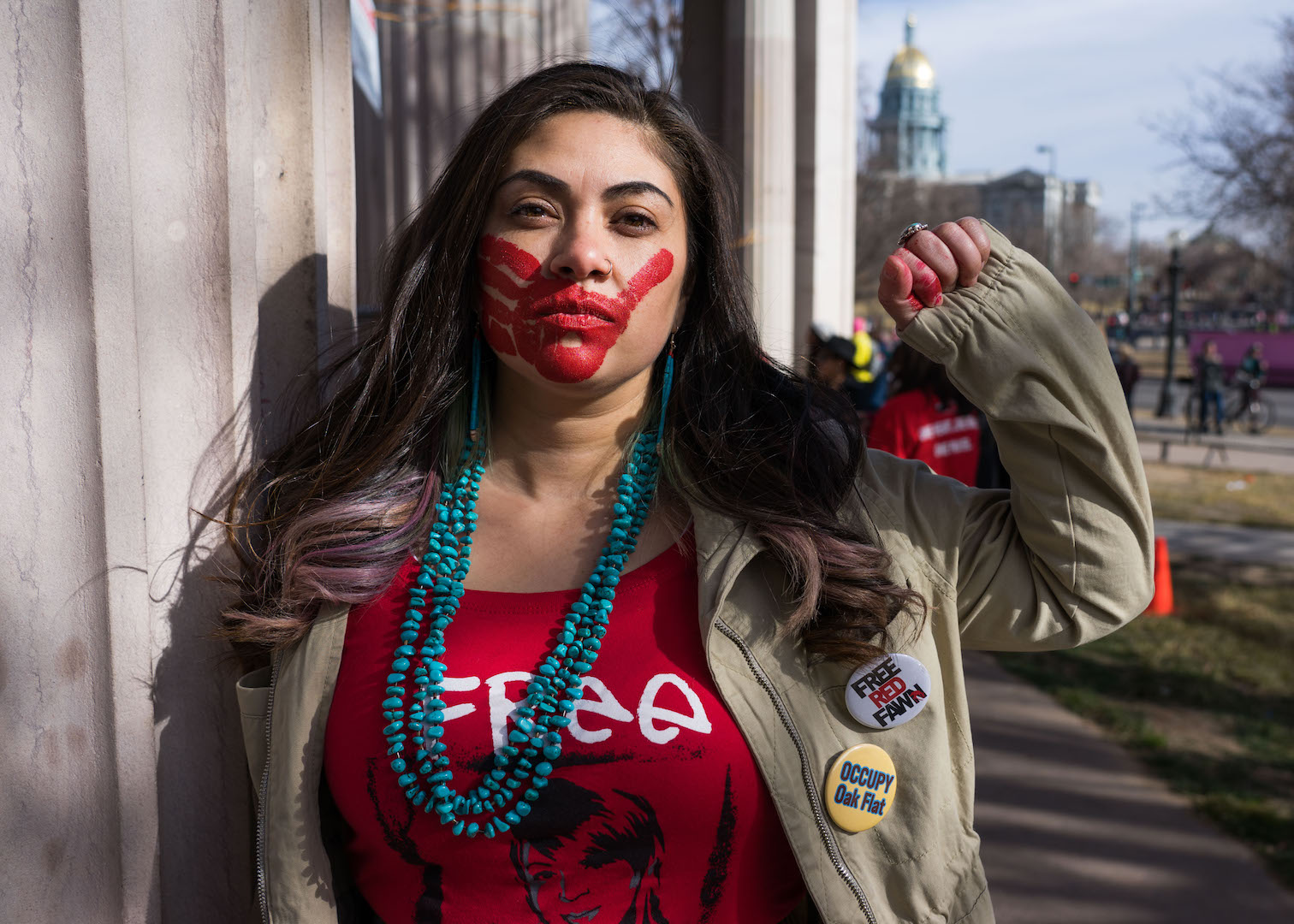 –
“I’m here to support my mom and women everywhere. As far as the Me Too movement, I think it’s about time, I’m glad to see it’s finally happening and I hope it keeps up. I bet there are a lot more stones to uncover.” – Davis Stone
–
“We want to support the resistance. As a middle-aged black couple, we want to show our support for all causes, not just Black Lives Matter. It’s a huge thing for us.” – Michelle Peterson
–
“We need to have a full presence. We need to have as many people as possible, so we can send a message, and that includes men.” – Keith Peterson
–
“We are here for so many reasons, there isn’t even room on this poster. We care for America and it feels like we are losing our values.” – Samantha Havelind
– 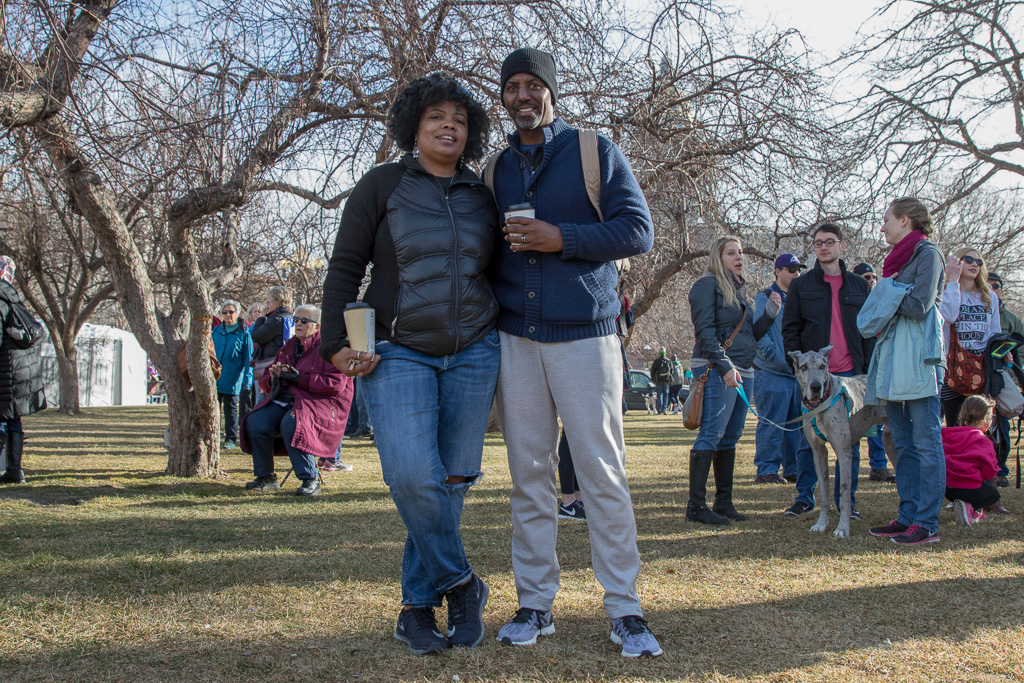 –“We have daughters and it’s really important they understand that this is for them, for their generation, for hands to be off their bodies and their rights.” – Kimalee Z’Dorne

–
“A year ago we were lost. We were scared. Just coming and seeing all the people that were here, we felt less alone. So that’s why we’re coming back this year. We’re hoping it’s the biggest crowd ever. But there are so many things, we’ve got Puerto Rico, CHIP. Shut the government down, we don’t care. That’s the only leverage we have right now.” -Bill Herber
–
“I think it’s time we stand together as women and use our natural powers to show people how to move forward in love and power and strength for everybody so we can all feel free to be who we are, whatever that means… There’s too many of us with the “Me Too.” That’s what finally got me out here. Not just women, but young men, need to learn to treat each other with respect.” – Kriss Olstrom 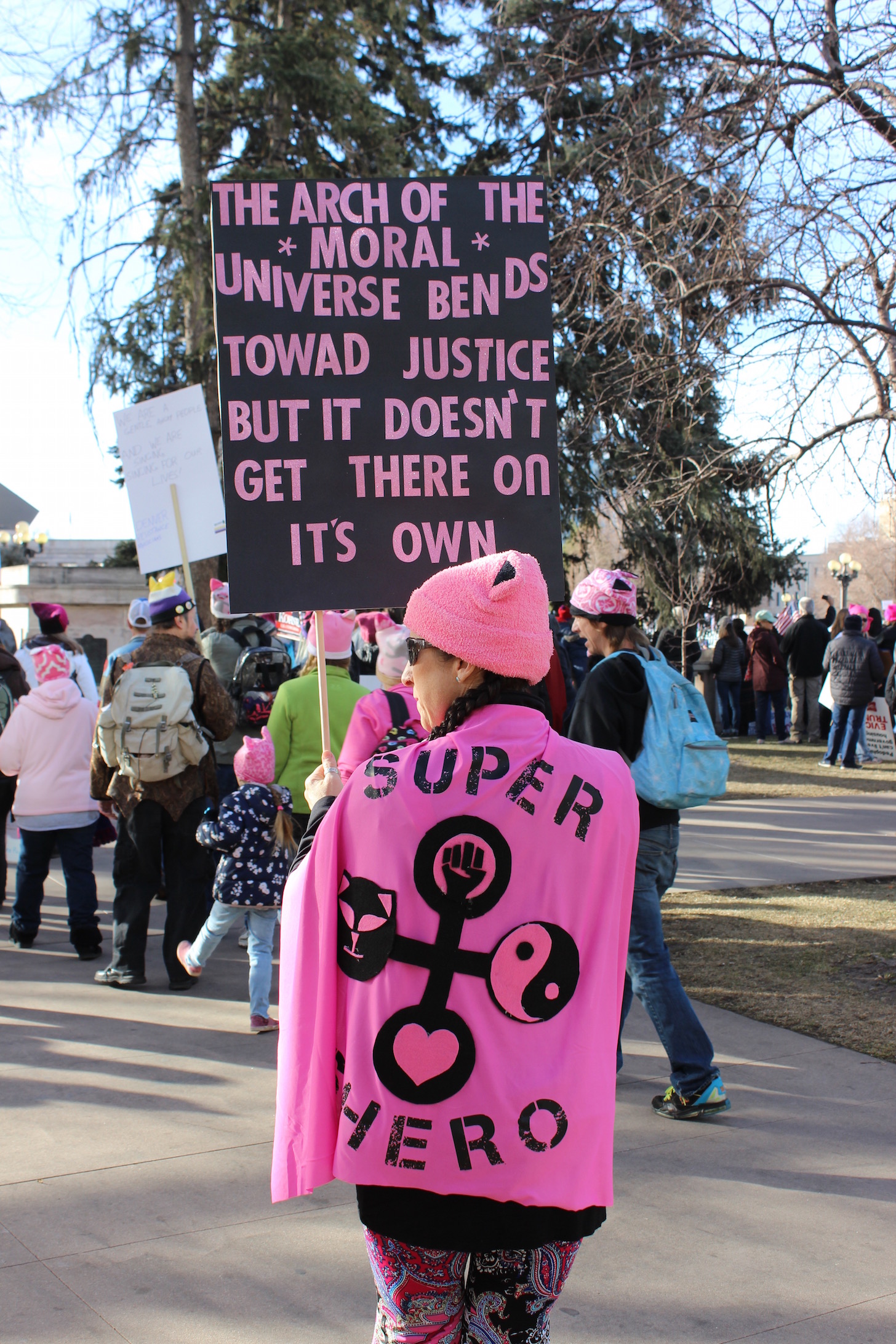 “I’m here for economic prosperity for young women and girls, to break glass ceilings, to give opportunity and to get equal pay.” – Kristana Kane
–
“I’m the father of two awesome little girls and I really believe in equality of women and men. But the other thing is also I’m an immigrant to this country and I think it’s horrible how we get treated by this government.” – Herby Merk
–
“I am marching mostly for women of color. And I’m representing  women of Mexico and my son… Like my son said, who’s 14 years old, ‘I’m very proud of my mother. She’s a small business owner, she deserves the same rights as my father does.’ So it’s mostly for my son, so that he can see that everybody deserves the same.” – Diana Ayala. 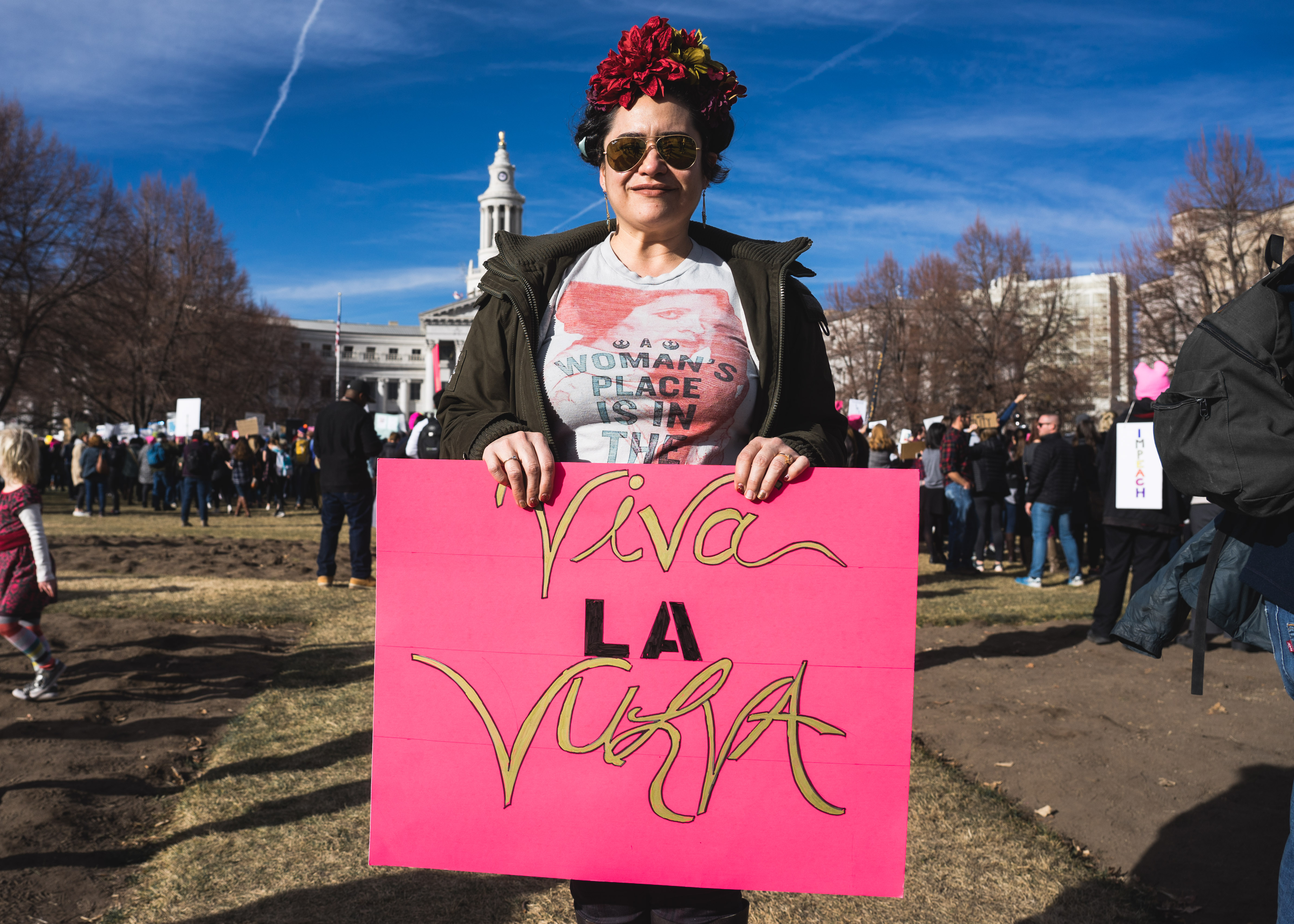 “I lost my mother when I was eight years old. She committed suicide because she was part of the patriarchy and was beaten as a child by her father. For me, the #metoo movement really hits home. If there wasn’t a patriarchy, he wouldn’t have been able to do that with impunity. He was able to destroy the lives of his children and never suffered any consequences. That’s what happens in a patriarchy. I’m happy that hopefully, other people won’t have to go through that.” – Adam Allman 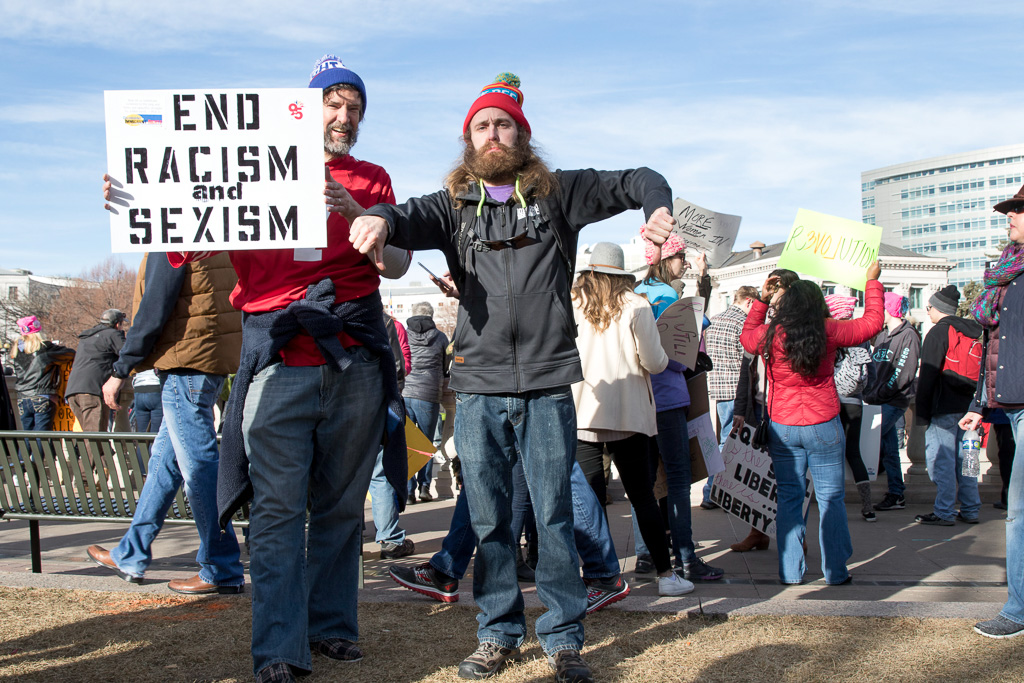 “It’s about time this conversation got brought up. I always figured it was there, I have a twin sister and a mom, but the revelations of how prevalent it is kind of made it more apparent to me. Now I think it should be in the forefront of every equality-minded person. This is a real issue.” – Matthew Levin
–
“I want to stand in solidarity with women for equality and have my voice heard.” – Jenae McCarty 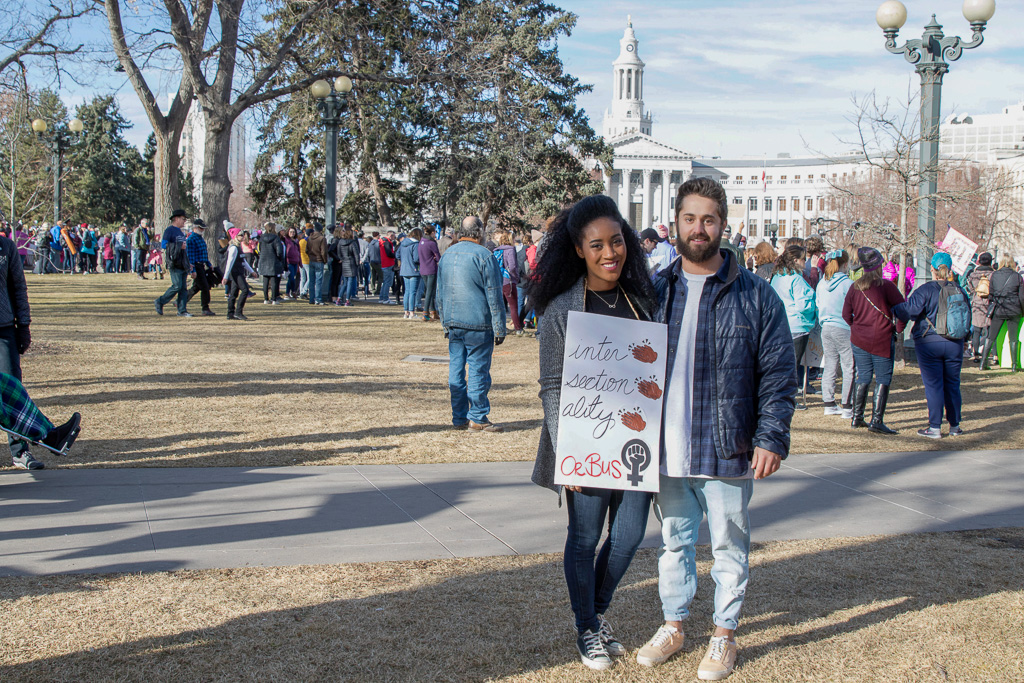 “I am very concerned about our current political climate and I want to support women in the world, and all of the other people feeling downtrodden. Last year the march was so hopeful, so I hope we can replicate that and continue it for all of 2018. I want to add my voice to the allied support of everyone. It’s nice to be surrounded by people who are loving and joyful and hopeful.” –  Kristen Boysen

“I’m concerned with the president’s treatment of women, particularly women of color. It’s important to collectively come together and show support for causes that are for true equality for America. This is really to show support for people who feel particularly vulnerable. They do matter and they are important… My sign is especially important, because we continue to close down Planned Parenthoods and restrict reproductive rights for women. We have an administration that talks about reversing Roe v. Wade and that’s insane. It’s been 50 years and we’re still talking about women’s rights to their own body. That’s absurd.” –  William Lumpp 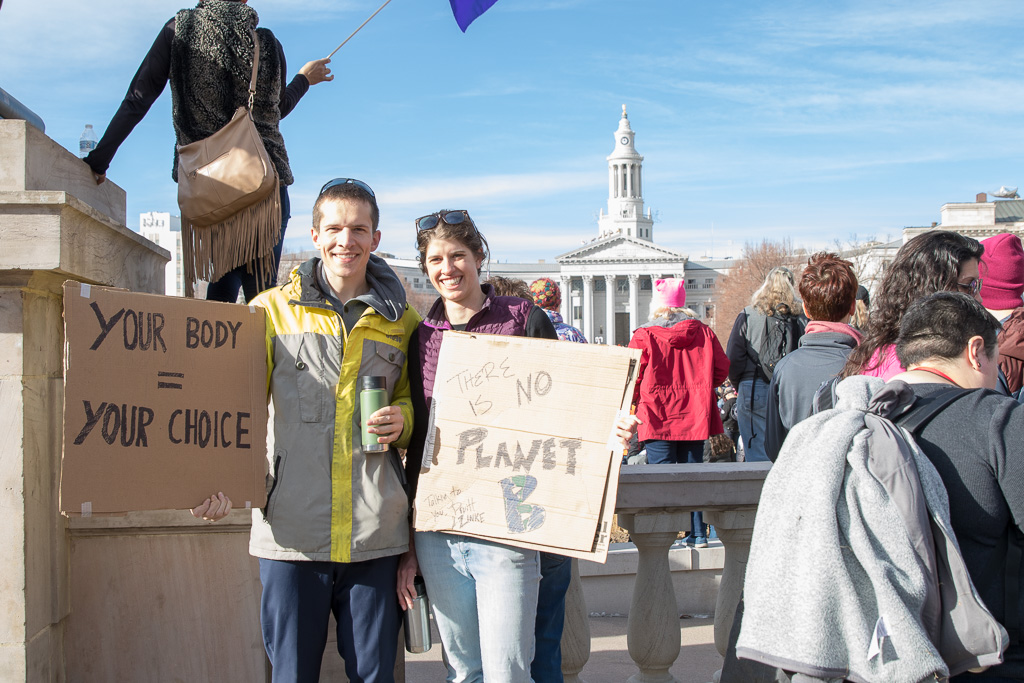 “My main concern is mental health, whether that be for women or men. We need to focus on making sure we have the funds we need so we all have access to mental health care.”  – Helen Todd

“I’m here joining women in solidarity and for my daughters and granddaughters. I’ve been at this forever. It’s in my blood. I raised my daughters that way. They are all marching today.” –  Mary Ann Hain

“Mental health is a big thing and insurance is getting to be a real problem. I’m an RN by trade, and I’ve seen healthcare get worse and worse. You now have to have an advocate to go to the hospital. It took my brother-in-law four ER visits in two months to finally get diagnosed as bipolar. They wouldn’t admit him because he was on Medicaid, so they basically vetted his wallet before they did anything and he still doesn’t have consistent care.” – Laurie Tanner

“I’ve been at this forever. It’s in my blood. I raised my daughters that way. They are all marching today.” 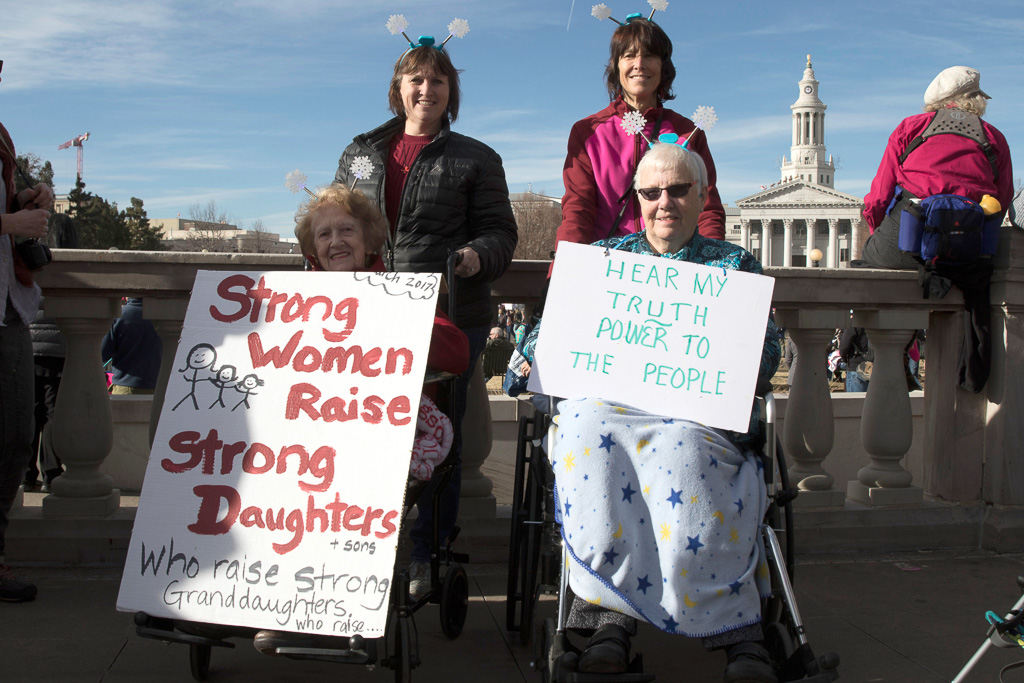 –“We’re a group of artists called BAAM which stands for ‘Build Art and Make.’ We started meeting and thinking about what we wanted to bring a protest. So we decided to make a life size torch of the Statue of Liberty… We chose the torch because we like that it’s a woman and it’s talking about immigrants and this idea of acceptance and love and all of these positive symbols.” – Nicole Banowetz 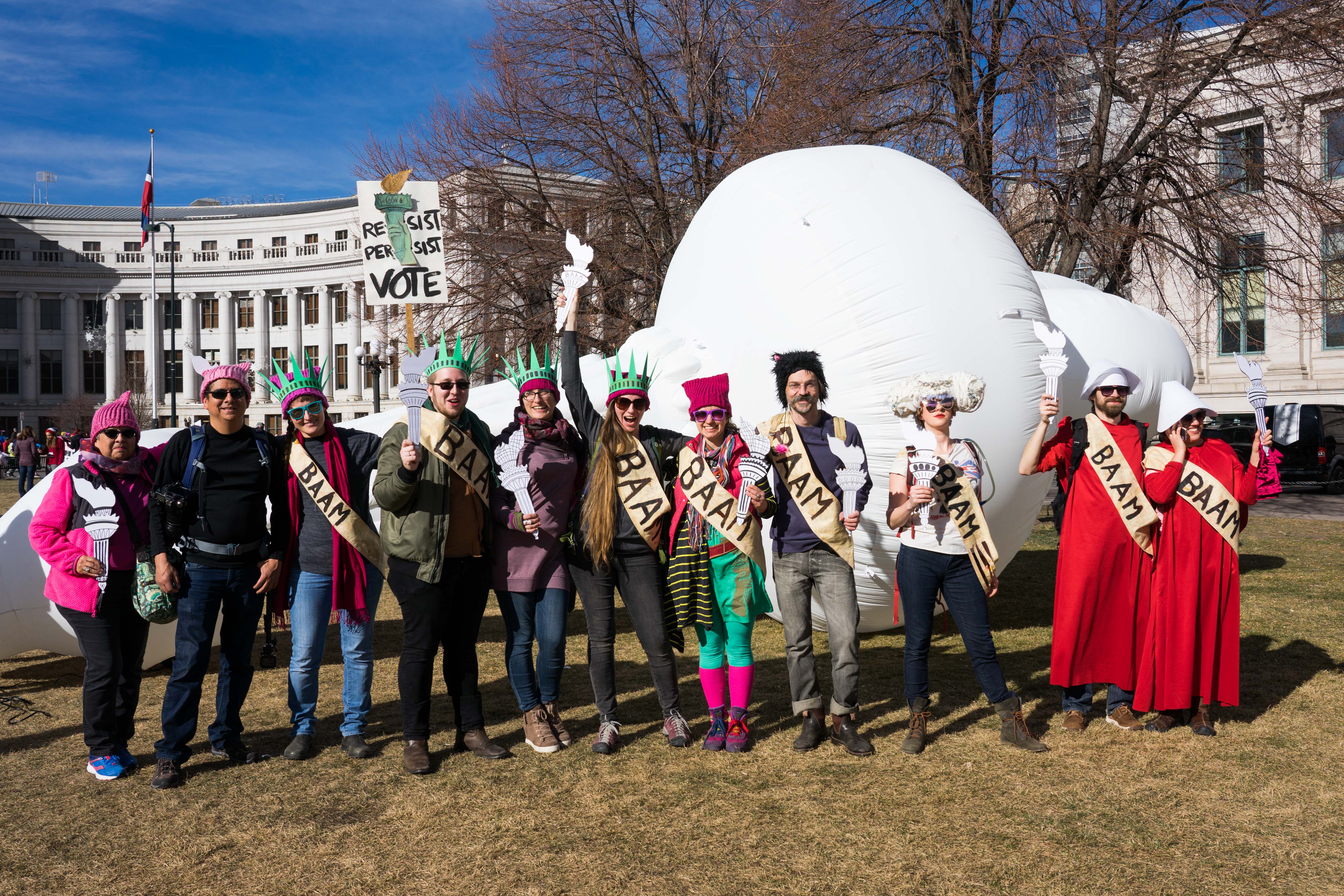