Our Favorite Colorado Murals from 2019

Every year in Colorado, we have the opportunity to enjoy the outdoors while seeing some amazing art as the state-wide street art scene flourishes and grows. This year, Colorado hosted more than five mural festivals, with three in their first year. Street Wise in Boulder brought activist-inspired art to the streets, RKY MTN WALLS in Granby brought colorful urban vibes to the small mountain town and the Fraser Mountain Mural Festival showcased more women street artists than men.

The existing mural festivals also made a splash this year, with CRUSH WALLS celebrating its 10th year. And as we witness hundreds of murals going up, we can’t help but love some of them as our favorites. Although we’d love to pay tribute to all the artists who spent time and energy creating wonderful public art this year, we decided to let you in on the ones we love the most. All of the murals in this list were painted in 2019 and we hope they stay on the walls long enough for everyone to enjoy them. 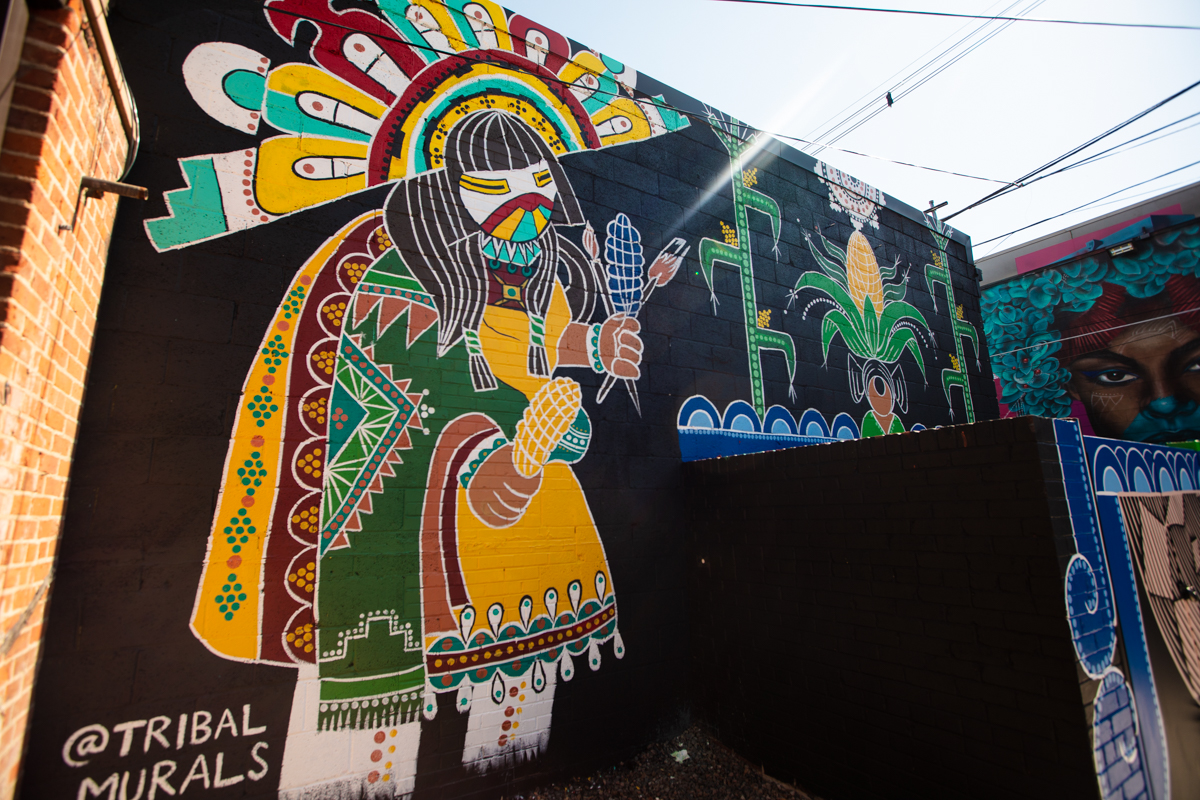 The Lowdown: This was Alicia DeOlivera Cardenas (aka Tribal Murals) first time painting at the annual street art festival CRUSH WALLS although you wouldn’t guess that given the prominent location of this mural. Her murals are painted with recycled paint and feature patterns and images from Indigenous cultures. It’s a reminder that mural painting originally came from Indigenous cultures in the Americas and her finely detailed work reminds us that painting street art doesn’t always have to be done in a hurry. 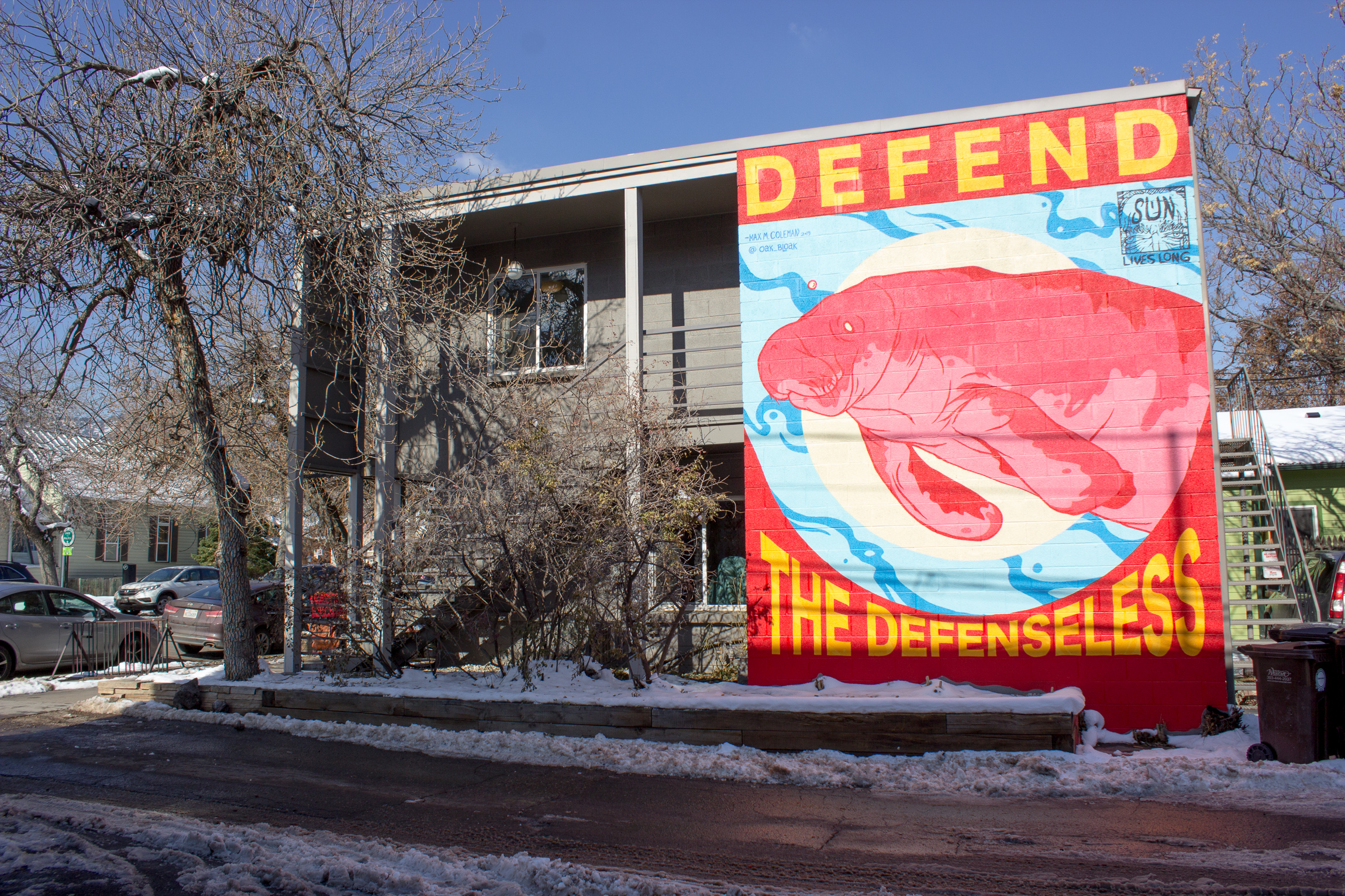 Mural by Max Coleman for Street Wise in Boulder. Photo by Cori Anderson

The Lowdown: Painted for the first annual Street Wise mural festival in Boulder, this mural is by a relative newcomer to the street art scene. Max Coleman makes the list because it’s well done and it carries a powerful message. Coleman’s current oeuvre of work is already iconic in that his murals are all almost entirely painted in primary colors and each one features an animal. This one highlights the manatee, a peaceful sea creature that is most threatened by human-related issues. 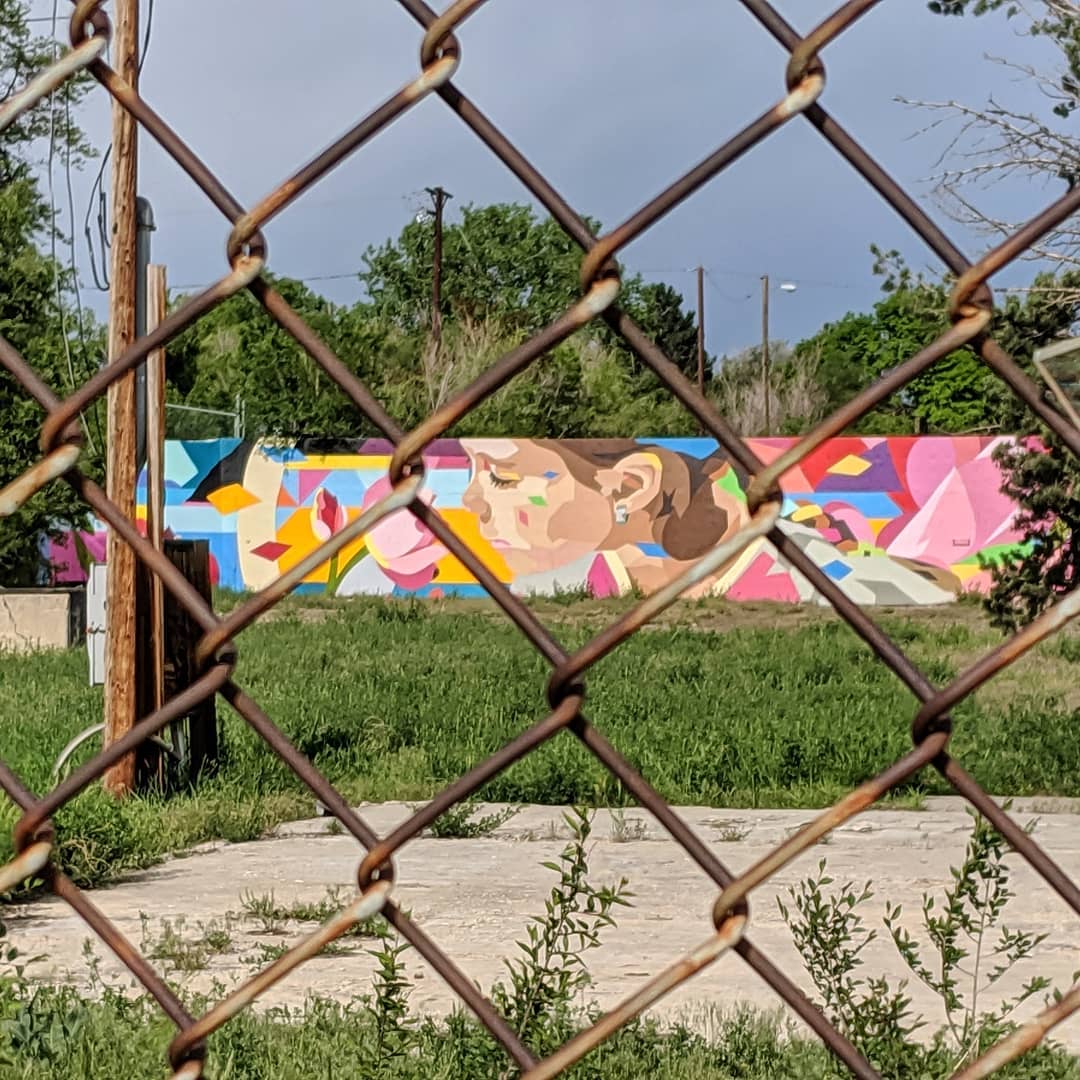 Mural by DAAS in the 40 West Art District. Photo by Cori Anderson

The Lowdown: DAAS showed up in Lakewood this summer to paint a colorful mural on a dirt lot in the 40 West Arts District, and titled it Take Time. Based in Austin, DAAS travels all over the world painting contemporary murals that use Cubist techniques and vibrant colors. Aside from this mural in Colorado, DAAS also painted a mural in Loveland, which means we might be lucky to get more murals painted by him in the future. 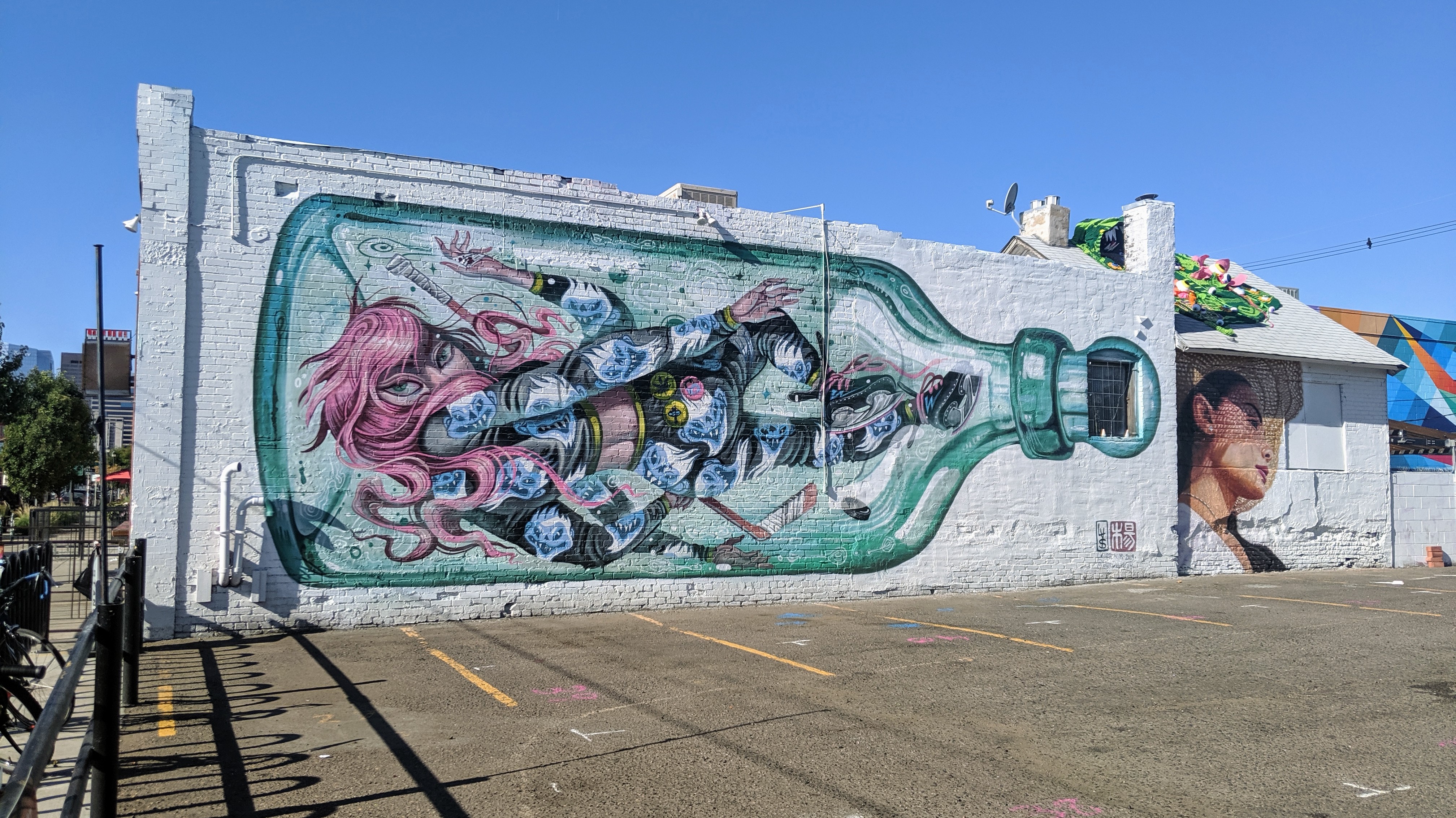 Mural by Lauren YS aka Squidlicker. Photo by Cori Anderson

The Lowdown: Los Angeles-based artist Lauren YS (aka squid.licker on Instagram) has been making waves for years with her impressive technique with a spray paint can and her whimsical and punk-ish designs. There’s a surreal feminism to her work that breaks up the monotony of the male-dominated industry. Her colors are bright but she refrains from using the whole rainbow in each piece, and instead focuses on cool tones or bright ones. This mural titled Puck Demon was painted for CRUSH WALLS this year in the main parking lot (which should basically be considered the equivalent to the main stage at a music festival). We love that this fierce woman with insane skill was featured in such a prominent location and that her final product did not disappoint.

The Lowdown: Colorado Springs may be the slowest city in the Front Range to embrace street art, but this year with the aptly named Art on the Streets exhibit, the city finally made the leap with six murals accompanying the annual six sculptures. This mural by Mauricio Ramirez of Berwyn, Illinois speaks to the “complex diaspora of the United States” through fragmented lines and a fluidity that feels like movement on the wall. Ramirez often tackles work that crosses borders or boundaries, and in this mural, he highlights a culture that Colorado Springs isn’t very familiar with. 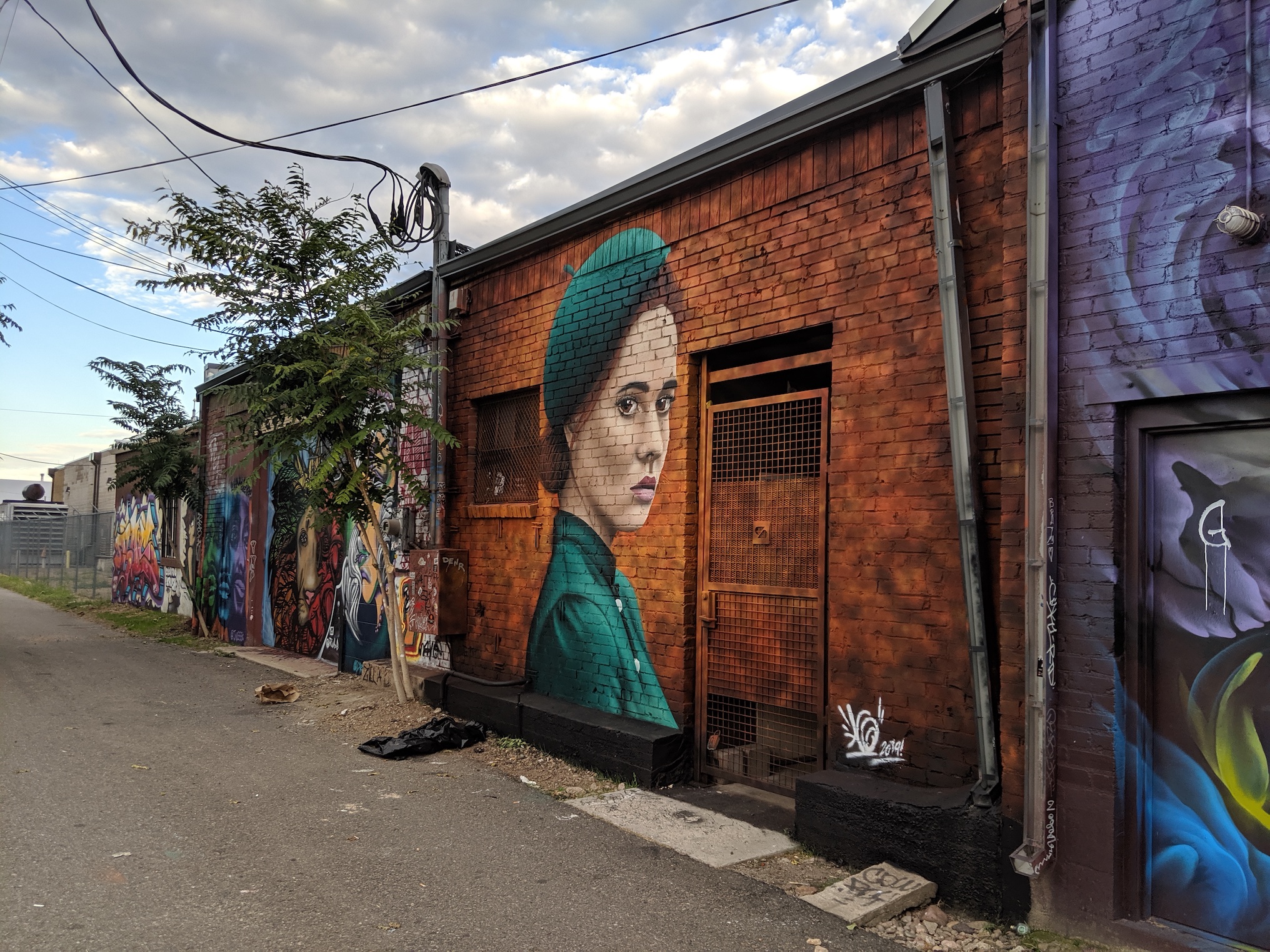 Where: Alley off 28th and between Walnut St. and Blake St., Denver

The Lowdown: This sneaky little mural went up after CRUSH WALLS in RiNo but surpasses many of the murals we saw at the festival itself. Painted by a local artist who goes by Ag_Pnt on Instagram, this mural is breathtaking in its photorealism. But, our favorite part about this mural isn’t how well it was painted (although that certainly helps). It’s the color choice and the look on the woman’s face — like a street art Mona Lisa. 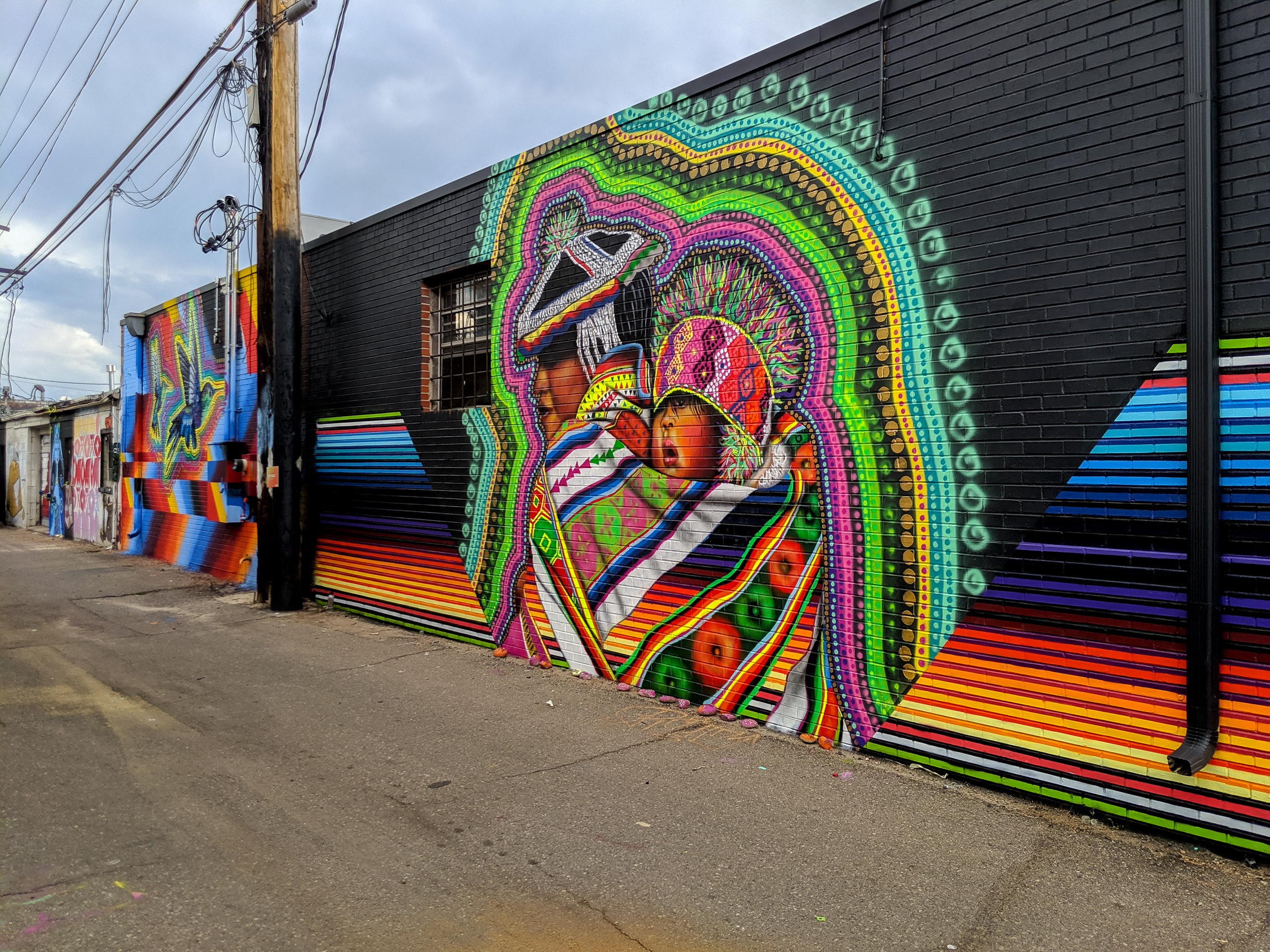 The Lowdown: Another mural from this year’s CRUSH WALLS makes the list with this collaboration piece from Miami-based Luis Valle and Denver-based Anthony Garcia Sr. Featuring a mother and child of both North and South Native American descent, the colorful mural celebrates neighbors, tolerance and the necessity of respecting the Indigenous cultures of our countries. The use of the mother and child hints at the gentle nature of relationships, as well as the guidance that we can receive from our ancestors. We also can’t get enough of this mural due to its size and location — you’ll have to walk by it a few times to really take it all in.

Milbery and Detour’s mural on Shear Design in Granby. Photo by Peter Kowalchuk

The Lowdown: This summer, for the first time, the mountain town of Granby hosted a mural festival will all Denver-based artists, organized by Pat Milbery of So-Gnar Creative Division. Taking over eight walls throughout the town, the festival sparked a bit of controversy but the finished murals are breathtaking and add a wonderful bit of culture and color. This one, by Milbery and Denver-based Thomas “Detour” Evans makes it onto this list for its size, unique composition and overall impact when you’re driving through Granby. 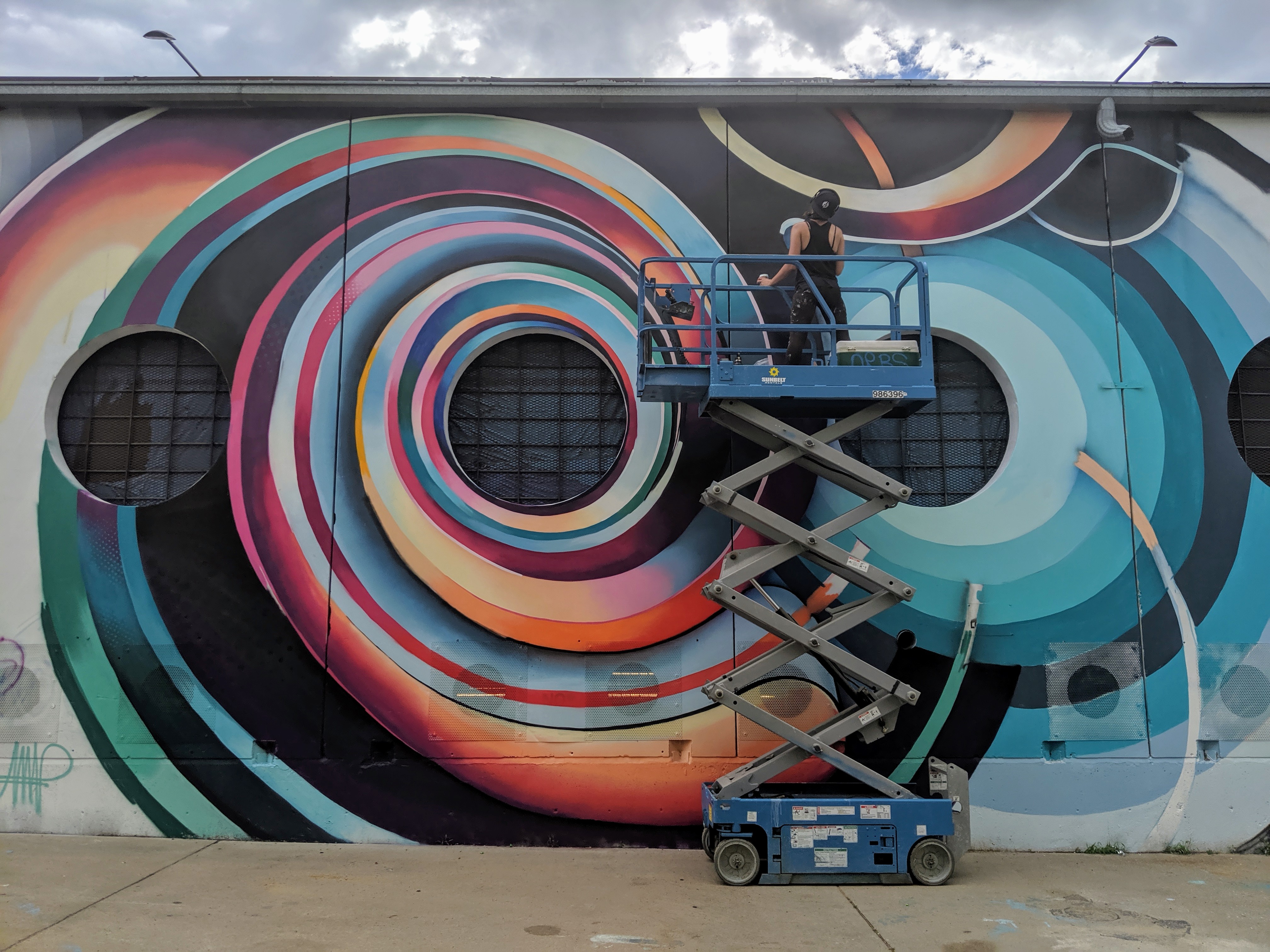 Anna Charney working on her mural for ColorCon. Photo by Cori Anderson

Where: Alley off 10th between Lincoln and Broadway, Denver

The Lowdown: Another first-time festival this year was ColorCon in the alleys off Broadway, presented by a group of local businesses within the Golden Triangle Creative District. Although we loved the entire output of the festival (which stretches two blocks in the same alley as this piece) Charney makes the list for our favorite murals partly because this was a huge endeavor for her and partly because it takes on a different color palette than she typically uses. With warm flamingo pinks and salmons, this swirling mural has a distinctly summery quality to it compared to Charney’s bluer series of work.

The Lowdown: 2019 was a big year for Kawaguchi, who hit the ground running in January with a new mural in RiNo for Erico Motorsports. Throughout the rest of the year, he participated in RiNo Arts Fest, painted for the Rayback Collective in Boulder, created a collaboration mural with Jason Garcia for the new mural festival ColorCon, participated in CRUSH WALLS in September and also managed to travel, paint private commissions and more. Our favorite mural of his from this year, however, was painted in the spring at Ace Eat Serve in Uptown. Transforming the entire west-facing wall, Kawaguchi added a new element to his iconic character with billowing clouds and rocky outcroppings surrounding her. It’s a true-to-form piece for the artist, but it displays an elevated level of technique and proves that Kawaguchi will keep leveling up in the years to come. 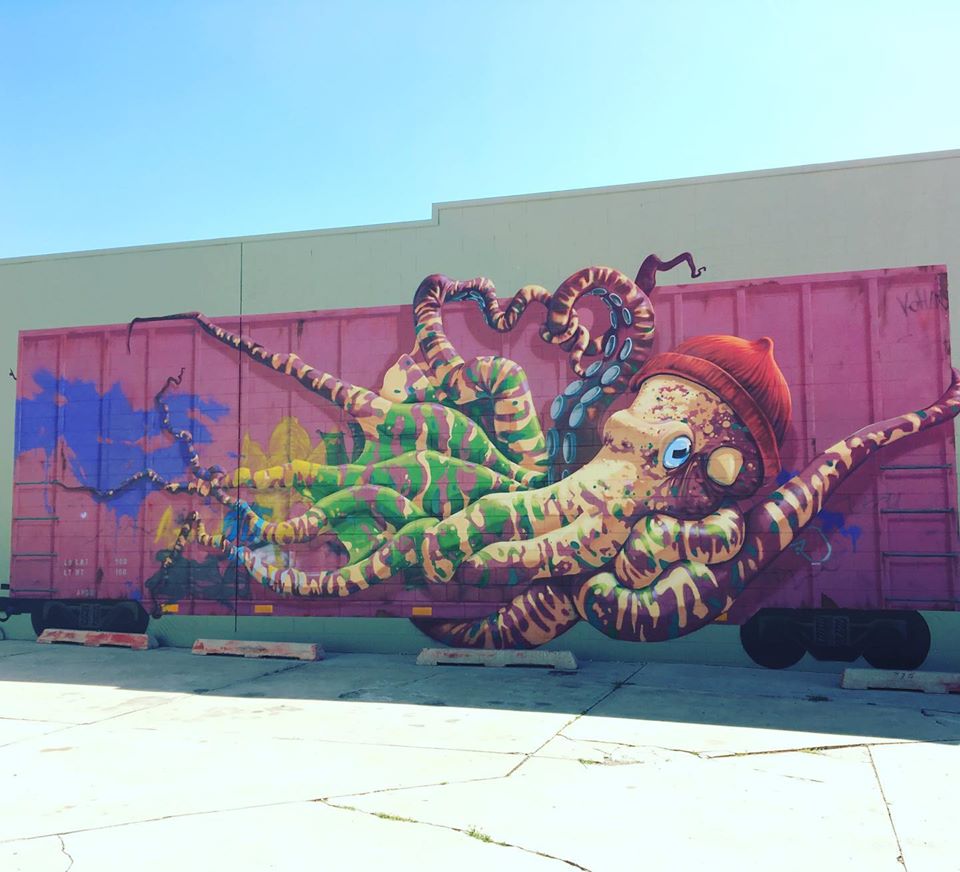 The Lowdown: Take a trip to Fort Collins and you’ll be pleasantly surprised by the emerging street art scene, mostly attributed to the Fort Collins Mural Project, started by Lindee Zimmer. This piece by Dan Toro, painted for this year’s festival, makes it on our list easily due to its impressive illusionary qualities (the train car is painted, too) as well as the original concept. It’s not just another woman’s face, and we are always happy to see murals with a little more creativity behind them. Toro is from Laramie, Wyoming and seems to be slowly making his way south, painting murals along the way. 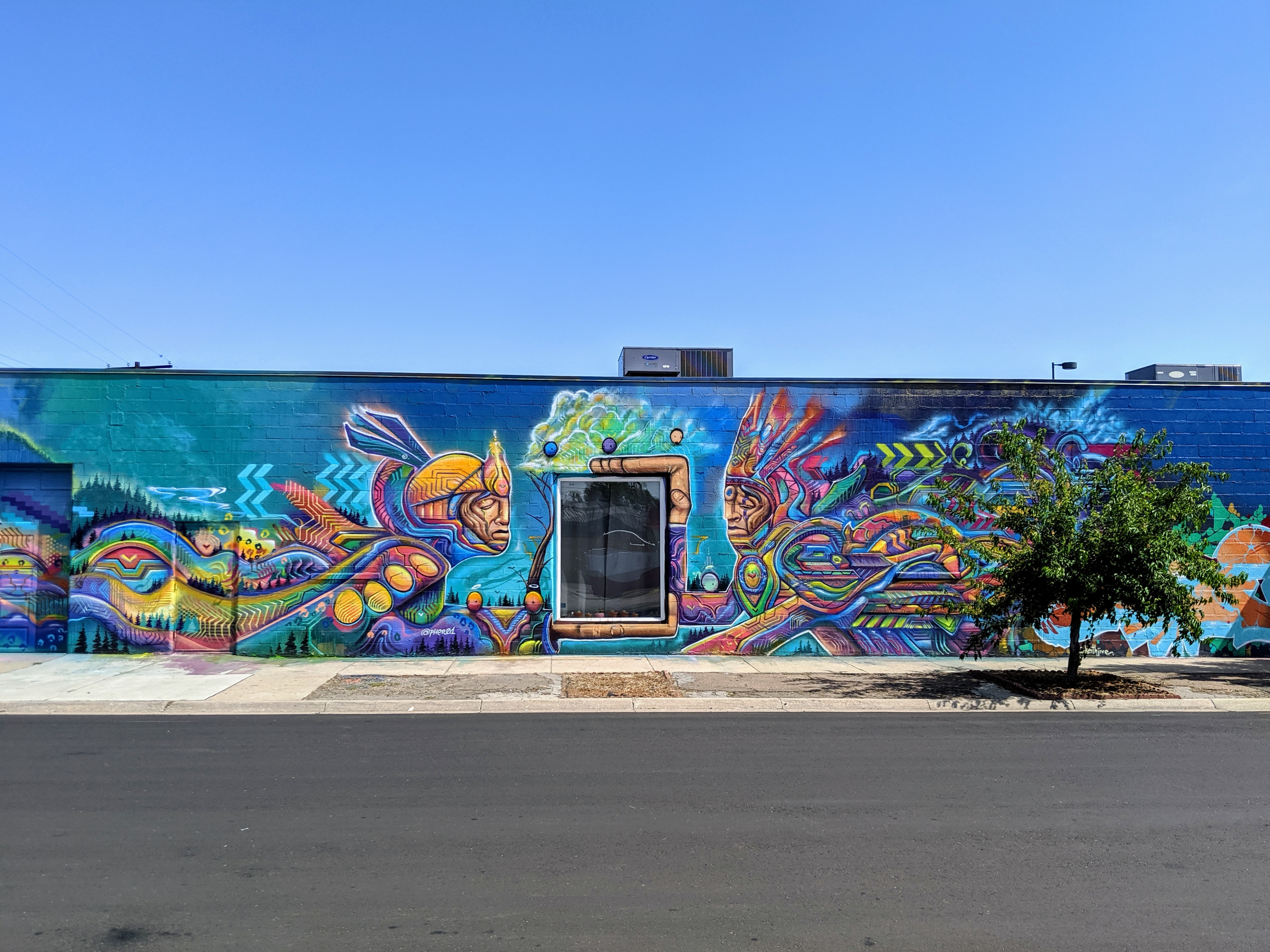 Mural by Pharaoh One (Pher01). Photo by Cori Anderson

The Lowdown: Denver-based street artist Pharaoh One (or Pher01 on Instagram) has been making his mark on the local scene for years, primarily painting in the Art District on Santa Fe and other less-trafficked areas (compared to RiNo). This one is no exception, as you can find it on South Broadway and Warren Avenue, on a building that is also outfitted with another Pharaoh mural as well as a collaboration piece by Denver graffiti writing pioneer Tuke and AJ Davis. This one makes our list, rather than the other murals Pharaoh painted this year (including a centrally-located one during CRUSH WALLS) because of the intricacy of the pattern work, the contrast of the neon colors against the sky-blue background and the incorporation of the windows and doors into the design. Take your time scoping this piece out, it deserves a close eye. 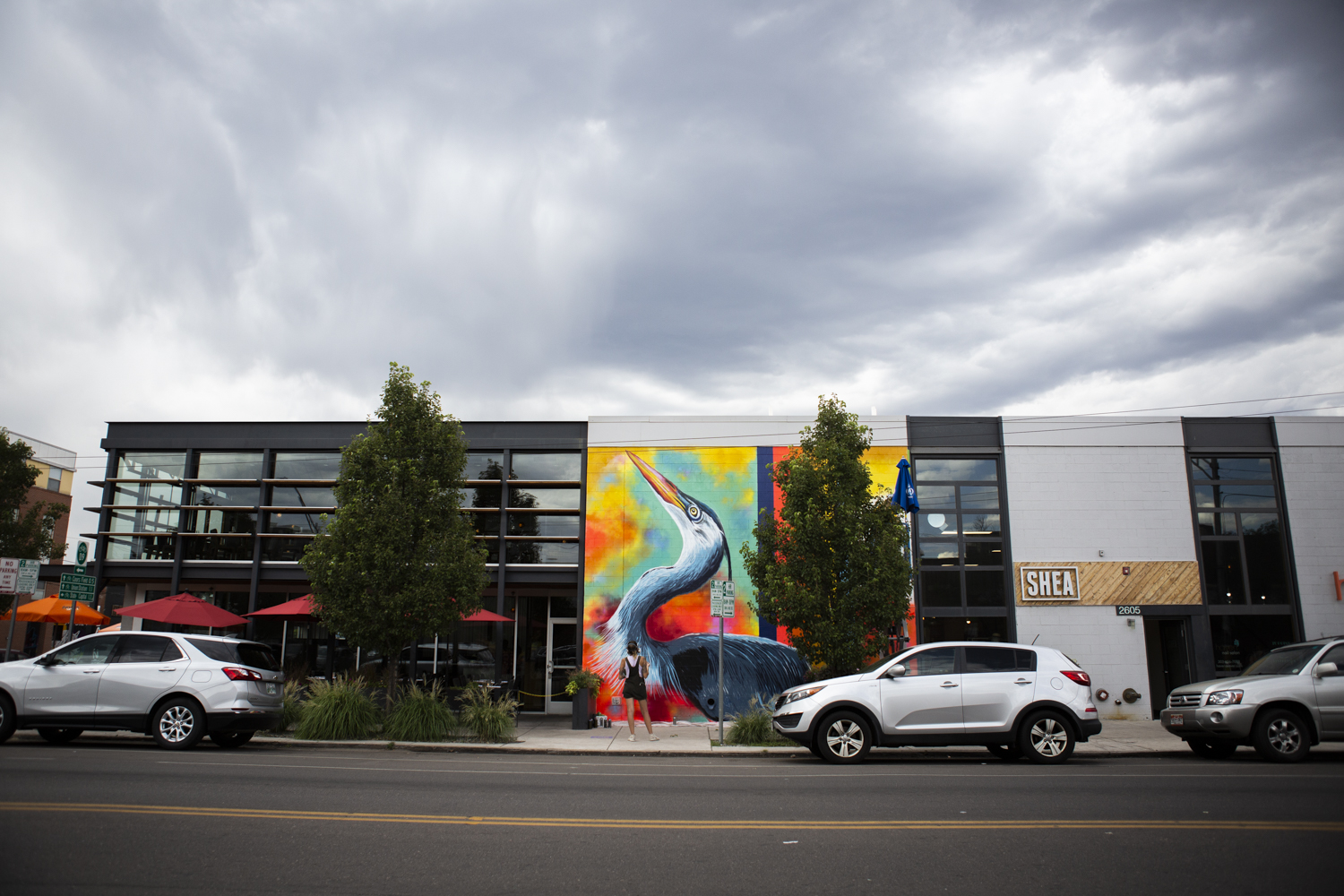 The Lowdown: If you need a pick-me-up in your life, look no further than this neon-inspired design by Alexandrea Pangburn and R0melle — two Denver-based artists who prove that women are just as badass as men on walls. Using spray paint and doing it free-handed, these two ladies created a gorgeous portrait of a bird on an otherwise monotone building. It will grab your attention and then keep it, reminding you of sunny days by the water. We also love this mural this year because last year Pangburn painted a different kind of bird in this same spot, leading us to believe she might make an interesting habit of it in the future.

Check out these articles.