The town of Granby isn’t known for many things — it’s often seen as a gateway or base camp for the plethora of outdoor activities accessible in Grand County. But this past week, thanks to the hard-working hands of 16 Denver-based artists, Granby received a mural makeover. Now, eight walls proudly display the collaborative work of these artists, pulling visitors and locals alike off the main street (Highway 40) to appreciate the new paint. But, this makeover did not come without some setbacks.

Starting on the east side of Granby, the first mural (noticeable from miles away) is by Denver’s RUMTUM and Oregon-based duo Rather Severe. These three have collaborated multiple times in the past — including a group show at the Denver gallery Dateline last month — and their work during the festival was seamless. Continuing down Highway 40, you’ll encounter Jamie Molina and Pedro Barrios’ mural on the Sky-Hi News Annex building on the left side of the road. Again, this duo works together regularly, making this piece a no-brainer.

Across from that is one of the centerpieces of the festival, painted by Pat Milbery and Thomas “Detour” Evans. It’s also the largest mural, stretching over 20 feet tall and dominating the corner plot with explosive colors and Detour’s signature portrait style. Around the corner (slightly off Highway 40) you’ll find two murals that are starkly different in design.

The first is Pat McKinney and Mike Graves — both Denver-based artists who have made impressions with their signature cartoonish designs and did not disappoint with a mural that looks like an animated portrayal of mountain life. Next door on the restaurant The Pearl Dragon, founder of CRUSH WALLS Robin Munro and internationally-recognized graffiti writer Taste worked on a moody piece that both fit the theme of the restaurant (with a dragon painted by Munro) and gave it an edge.

Journey further west into town and find two more murals next to each other near 2nd Avenue on the Grand County Board of Realtors building and L.A Eatery. On the Board of Realtors building is a piece by Esic and Lowkey Creative which uses natural inspiration to portray an enchanted view of a forest. Next to it is a mural by Armando Silva (of Greeley) and Denver’s beloved Anthony Garcia Sr. of Birdseed Collective. Their collaborative mural stitched together Garcia’s love of patterns with Silva’s skill in photorealism. And the subject pictured in the center? Silva’s sister.

Last, but certainly not least, Lion’s Head Coffee (located at the only stoplight in town) was taken over by the iconic aspen tree wheatpastes of Koko Bayer with accessorized pattern work from Sandra Fettingis. Because wheatpaste depends on weather conditions (it’s hard to paste paper on wet walls when it’s raining, for instance) Koko and Fettingis had to delay working on their collaboration until after the weekend was over. 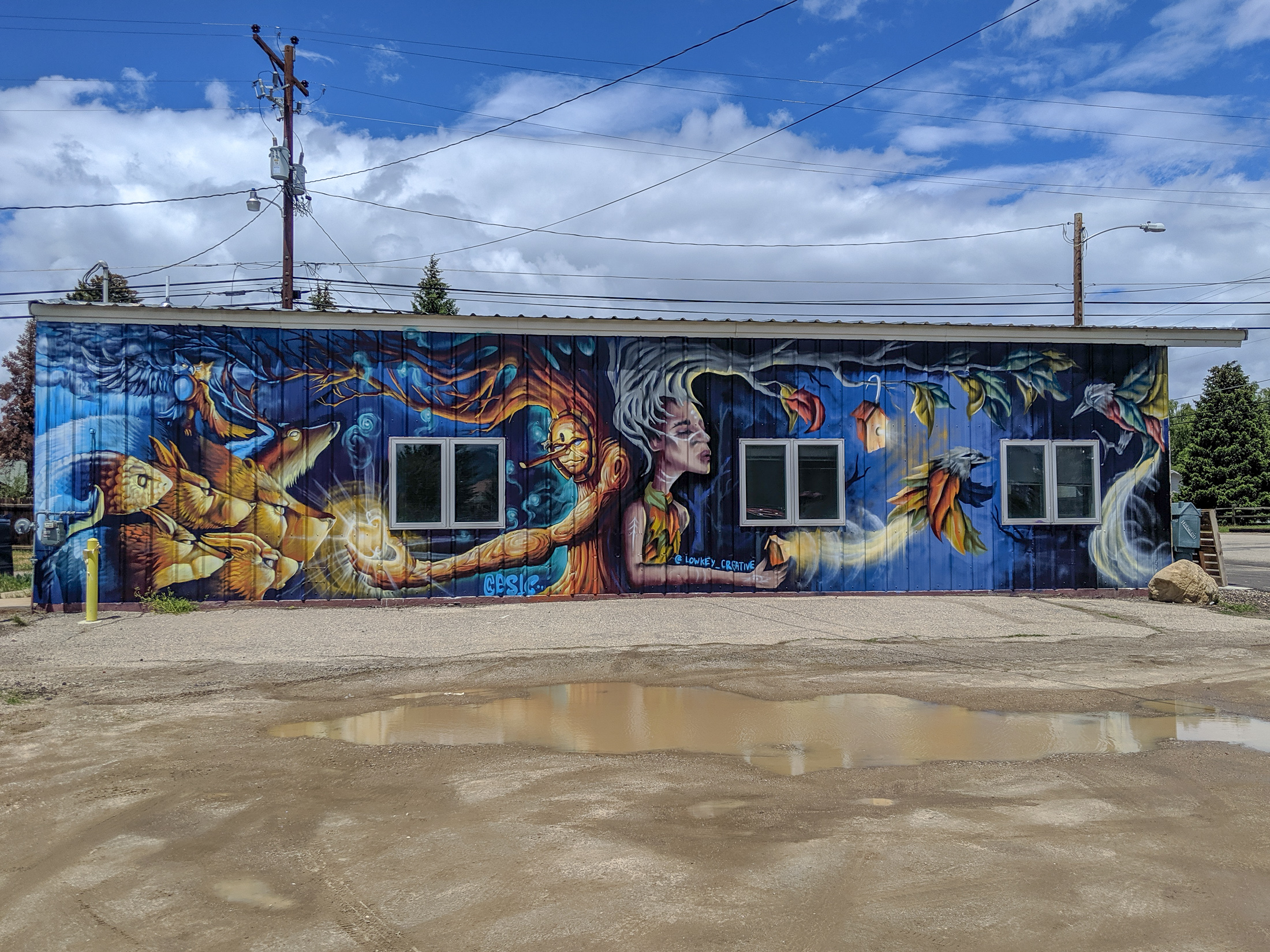 Mural by Esic and Lowkey Creative. Photo by Cori Anderson

Organized in part by Milbery, who is So-Gnar Creative Division’s founder, RKY MTN WALLS was designed to provide a unique aesthetic to the small mountain town by bringing in well-known artists. Each artist was paid the same stipend — $2,500 — and paired with another artist with a similar style to collaborate with. Last year, Milbery and McKinney (another member of So-Gnar) painted a large mural that more closely resembled the existing interests of the residents — horses, mountains, the words “Granby” and “Adventure Awaits” in a color scheme that feels like a hybrid of the state flag and the Broncos. But this year, the artists took a little more freedom to transform the town. And the reactions were mixed, to say the least.

The festival — which was slated to take place between June 19 and 26 to allow the artists an entire week to finish their murals — experienced a rough patch during the weekend when rumors spread that the town would paint over a specific selection of the new walls. The murals in question were painted by the only artists of color — Garcia Sr., Silva and Detour.

Business owners who appreciated the makeover of their building bristled at the thought of receiving a beautiful mural only to have it taken away from them. “We will do anything to keep our mural,” Krystle Moeller — the owner of Spirits-N-Things and Shear Design — commented. Her building (painted by Detour and Milbery) was one of the most discussed murals. But, according to a letter sent to members of the local town government, other business owners were not so happy with the art.

“The Chamber’s theme for their event was ‘drawing on the beauty of our mountains and the unique wildlife.’ The issue is not with art, nor the artists, and certainly has nothing to do with race (my own family is mixed race), but that some didn’t see the theme portrayed,” Mayor Paul Chavoustie remarked. 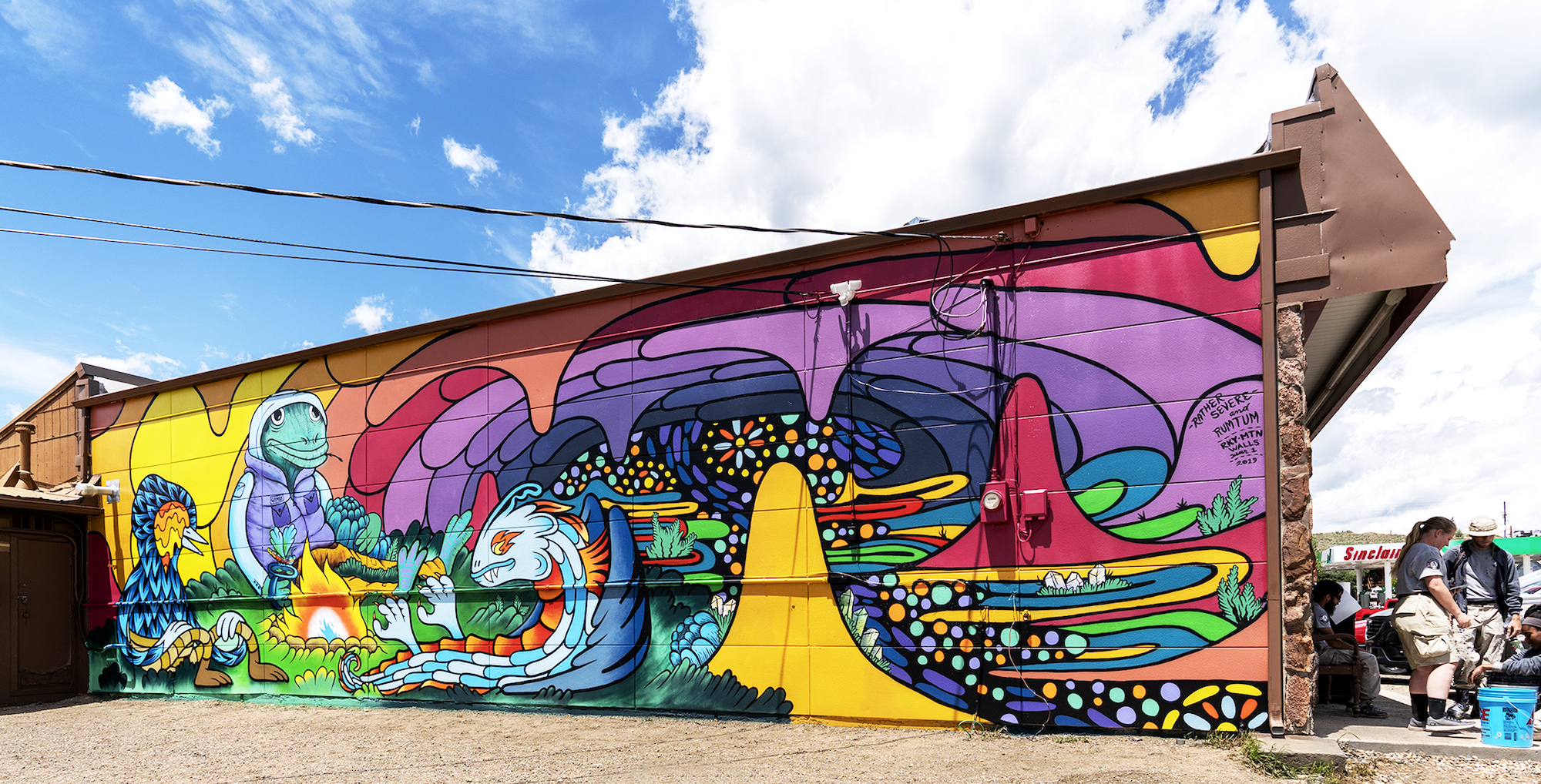 Mural by Rather Severe and Rumtum on the Granby Visitor Center. Photo by Peter Kowalchuk

After the local paper Sky-Hi News wrote an article during the festival, some of the comments posted online called the murals “glorified graffiti” and lamented the lack of “Western identity” in the compositions. That should have served as a sign to the artists that some members of the community were less than enthusiastic. Nevertheless, they persisted in their creative endeavors while social media flared.

One of the foundational problems with trying to infuse street art into small communities is a lack of understanding about it and why artists choose to practice it. Of course, everyone holds varying opinions about those forms of public art and they are entitled to like or dislike something based on personal taste. However, when the problem arises out of the mere presence of street art — and not the aesthetics of a particular piece — it serves as a reminder that rural lifestyles are not usually adaptive to change. And in the world of street art and graffiti, change is one of the only constants. Pieces come and go on walls frequently, and the artists who paint them understand they have chosen an art form where the product of their creativity may not be preserved for eternity. 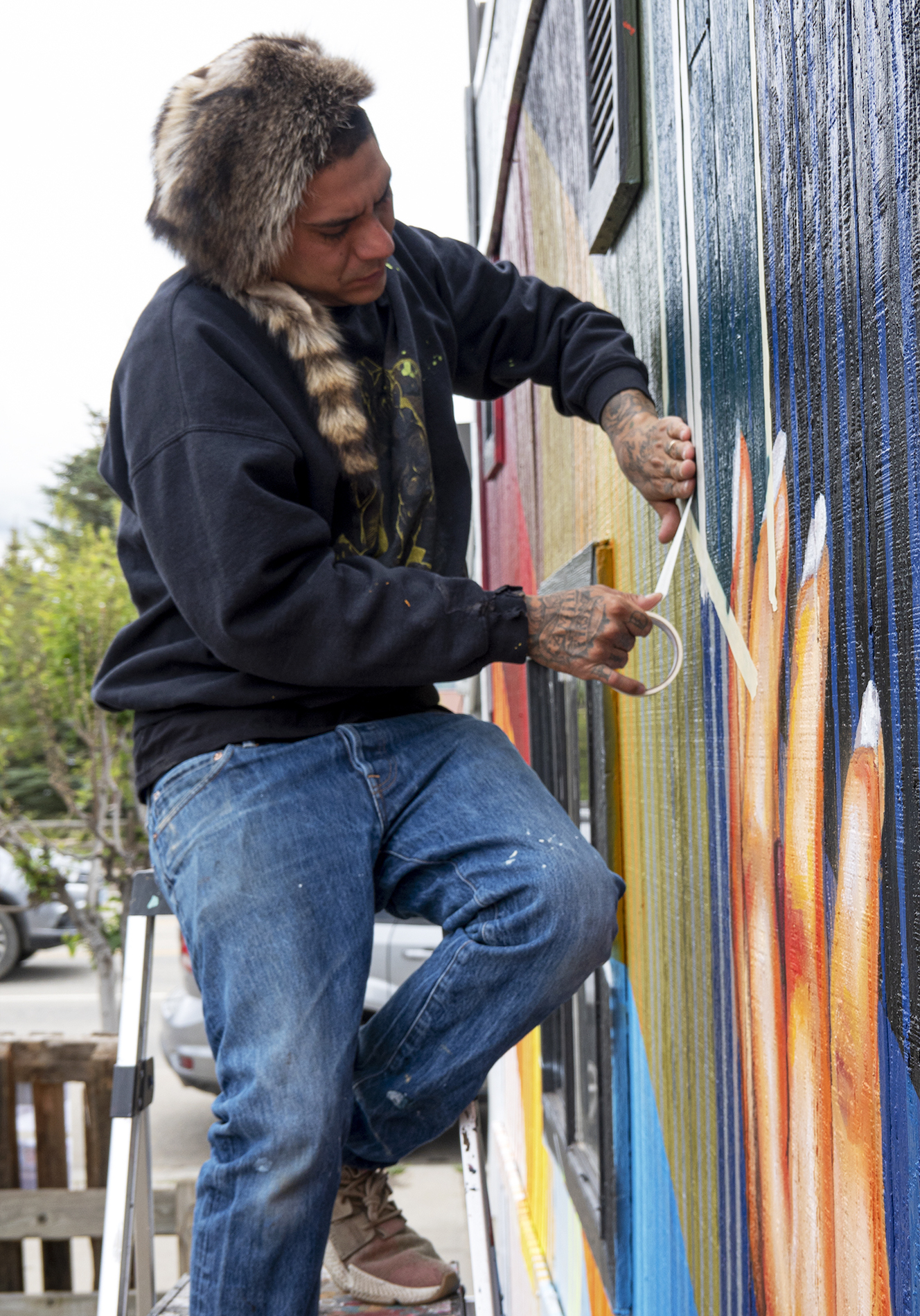 Anthony Garcia Sr. working on his part of the mural on L.A Eatery. Photo by Peter Kowalchuk

By Monday, everyone was concerned about the fate of the murals. The town of Granby offered residents an opportunity to air their grievances or offer support on June 25 during the public comment segment of a regularly scheduled meeting. The turnout was impressive, especially for a town that struggles with civic involvement on a number of other issues, and Milbery attended to defend and support the festival and also the artists who participated (many of whom he considers good friends). A few dozen residents stood up and spoke during the meeting, rallying behind the artists and the festival. The amount of passion in support of the murals surprised the Board of Trustees as well as Mayor Chavoustie. On the city’s side, the rumors about the town “whitewashing” the walls without the permission of building owners were squashed, and instead, they insisted that building owners could decide on their own if they wanted to keep the existing murals.

“There was no process to give the public a say in public art. Local artists would have liked to be more included, as well. Despite the controversy, so many people have commented on how great the art is, and what a great addition to the town it has been,” Mayor Chavoustie commented. He added, “my personal favorite is the mural on L.A Eatery.” 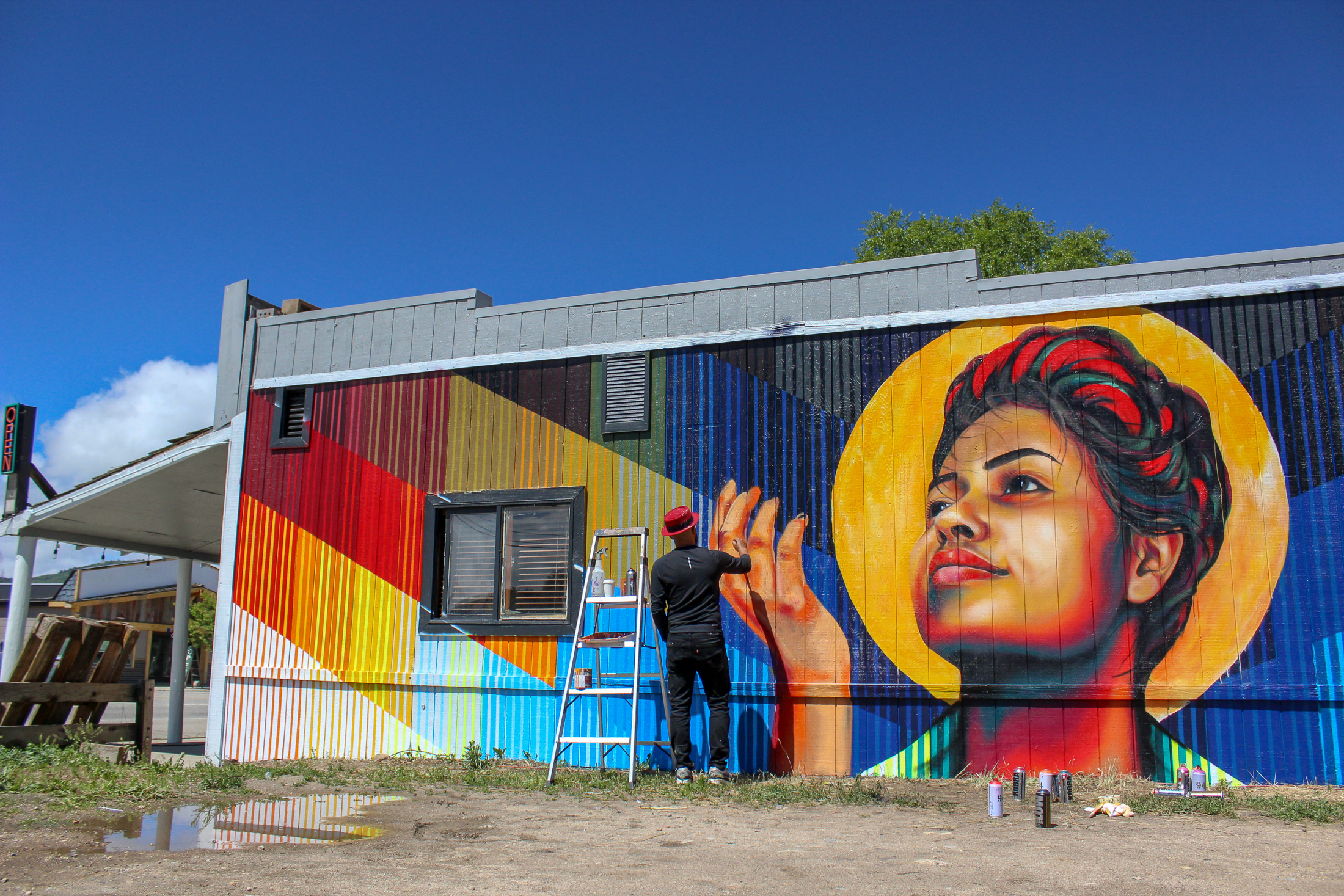 Silva working on his part of the mural at L.A. Eatery. Photo by Cori Anderson

Additionally, Mayor Chavoustie mentioned that the planning procedures before RKY MTN WALLS occurred could have been more transparent. He wondered if conceptual images of the murals could have been provided, or public comment from the community could have been accepted. But ultimately, it became apparent from the meeting that everyone learned a valuable lesson from the festival. Artists were reminded that their creations incite conversation. Town residents were reminded that a world exists beyond Granby’s Main Street — a world that is filled with different ideals and imaginations and ways of life. And the town leadership members were reminded that every step toward change must require extra supervision and guidance, but that it’s worth it in the end.

Despite the rumors and the initial shock from the artists and business owners who loved the changing visual landscape of Main Street, the overwhelming consensus after Tuesday night’s meeting was in support of the festival and its efforts. After all, people were stopping in Granby all week to take photos and talk to artists, which is more attention than the town has managed to attract in years (I know personally since I grew up in Grand County and went to high school a few blocks away). This bodes well for the future of art in the mountain town, and for the possibility of a second annual RKY MTN WALLS next summer.