What You Missed At The Visible Pop-Up Shows With HAIM, Anderson .Paak, Tierra Whack and GRiZ

Visible — a new phone company from Verizon based in Denver — wanted to show us what it would be like if we could live in our phone. Enter “Phonetopia,” a pop-up venue in RiNo. Phonetopia is a blue world in a blue warehouse with staff wearing blue clothing while they search your bag at the entrance. Inside, it’s warm and quiet (like your phone screen.) The low lighting highlights the important things — the bar, people’s smiles and the big screen with dancing animations that pacify our attention while we wait for the stars of the evening. We re-capped the three different nights of pop-up performances between Maggie Rogers and surprise closer Kacey Musgraves — who will perform this Saturday, November 23 — in case you couldn’t make the 200 capacity RSVP list. 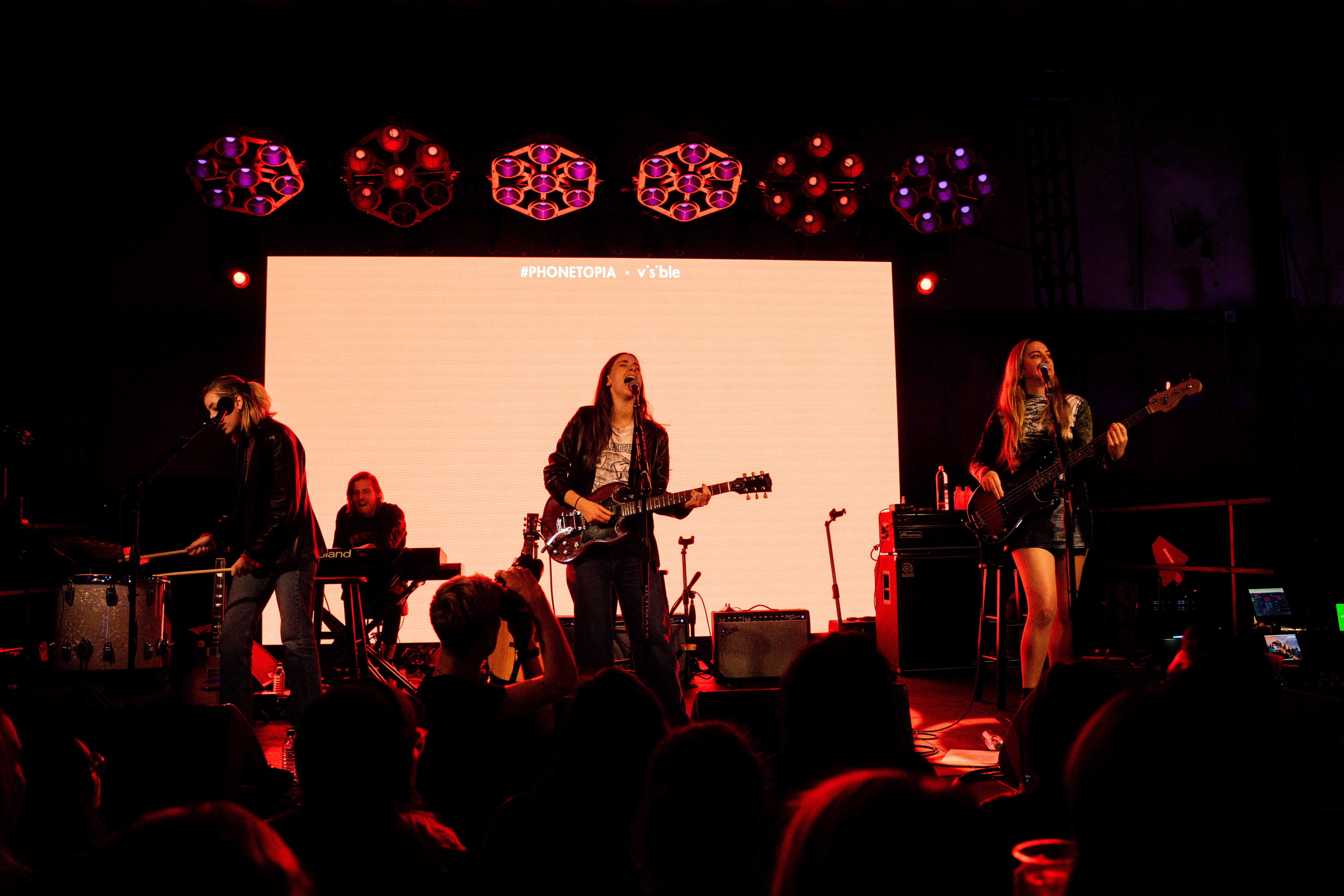 HAIM is a big deal. The family — Este, Danielle and Alana Haim — have been playing music together since childhood and have grown into a rock band that continues to build its catalog with a breezy and effortless soulful sound. Yet as the group continues to dominate and sell out big venues  — they headlined Red Rocks last year — HAIM has kept its reputation as a funny, approachable, and all-around likable band. That made HAIM the perfect act for this intimate pop-up set.

After a warm greeting and some musing on whether they should sit or stand, the sisters opened with an acoustic version of their hit song “The Wire.” After performing each song — Este on bass and vocals, Danielle on guitar and vocals, Alana on percussion, backing vocals and a mystery keyboard player — there was considerable banter between the sisters. After a couple of songs, they let it be known that Denver had a special place in their heart because it was the first city they performed in outside of LA, during a show at the Ogden.

HAIM is known for their killer cover game, and last night’s set included Shania Twain’s “That Don’t Impress Me Much,” Paula Cole’s “I Don’t Want to Wait” and Fleetwood Mac’s “Dreams.” On the Stevie Nicks note, the sisters divulged to the audience a story of how they met Nicks at her house, an experience that caused Este, she said, to “shat” her pants.

Between covers and original songs like “Honey and I,” “Go Slow” and the night’s set-closer “Want You Back,” HAIM delivered the audience exactly what was desired at such an up-close and personal pop-up show. HAIM’s sound is full, smooth and their harmonies so effortlessly infectious, every audience member was clinging to each note or snippy banter between sisters. – Jessica Rendall 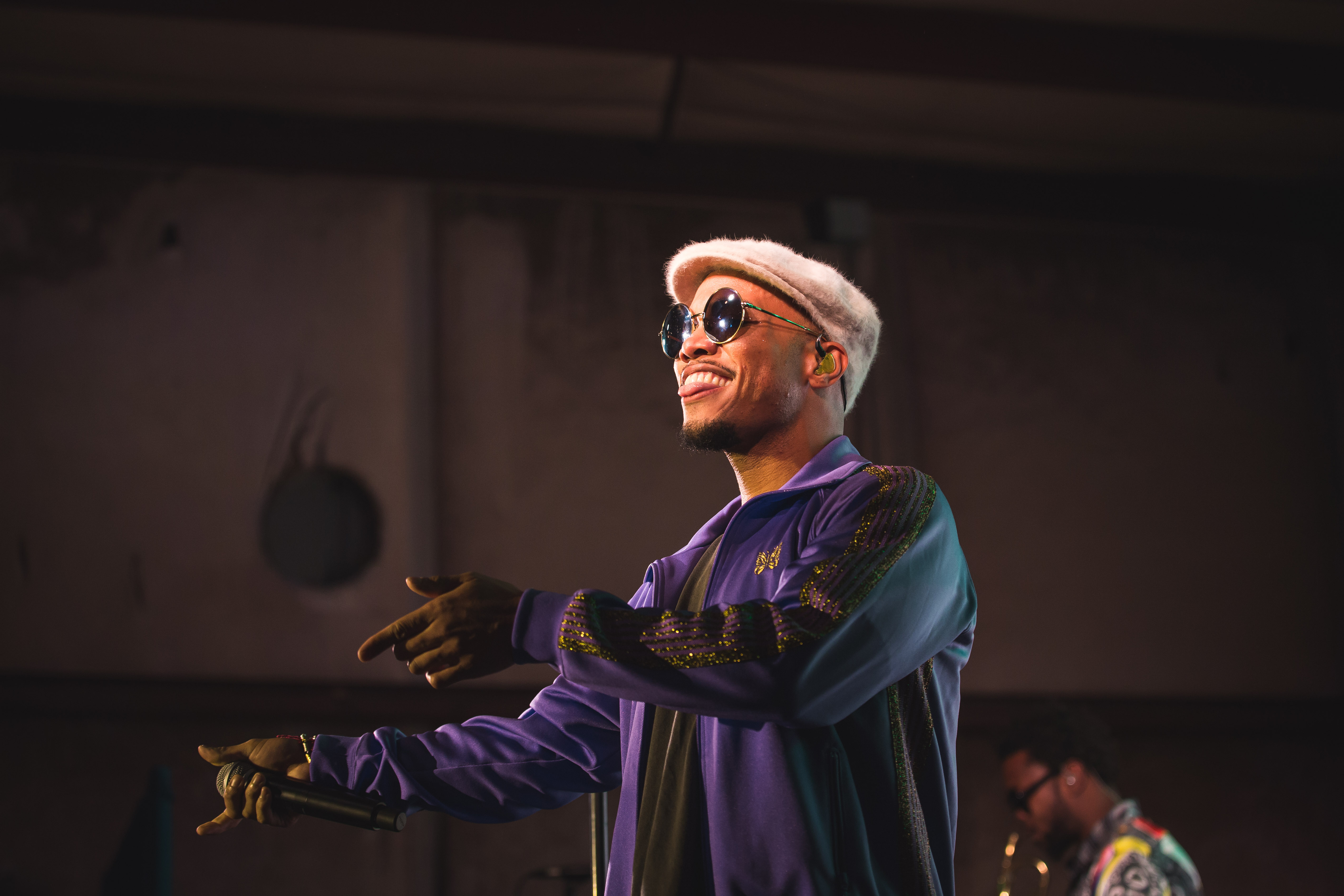 Just hours before the third live music show at Visible’s Phonetopia pop-up venue, French Montana — the scheduled main act — dropped out. An official statement explaining his absence has yet to surface, but judging by his recent Instagram posts, the Casablanca-born rapper forewent his Denver performance to catch a flight to Morocco to see his parents. Since Montana is presumably safe, we feel a little less guilty about interpreting his replacement with Anderson .Paak as a sign of our immense good fortune.

While the intimacy of the venue inspired Maggie Rogers and HAIM — Phonetopia’s previous musical guests — to give stripped-down acoustic sets, Anderson .Paak went the opposite route. He pulled out all the stops he could in such circumstances to give Denver a high-production show. This included rounding up as many musicians as possible from his backing band, The Free Nationals, to join him onstage. He also recruited Grammy-winning producer, composer and trumpeter, Maurice Brown, to artfully splatter brass accents across his slick R&B and funk-rap hits.

The Denver audience — overwhelmed with their own luck — were already chanting the artist’s name by the end of the second song, “Saviers Road.” With surprise and delight, he responded, “I haven’t even popped off yet!” He then directed us all to howl at the moon — an easy task, seeing as everyone was already over the moon with the night’s developments — before launching into “Come Down”. Appropriately, Anderson .Paak took off his trademark sunglasses to deliver the lyric, “Can’t see her with these pitch-black Gucci frames on, let me take these bitches off” before putting them where they stayed the rest of the night.

Anderson .Paak’s performance felt slick and unexpectedly large-scale. This was ultimately an effect of the polished musicianship of the artists onstage than of the show’s actual production elements. .Paak’s own multifaceted skill — as a singer, rapper, and drummer — leveled-up the standard of seemingly small-scale concerts that night.

Rapper-on-the-rise Tierra Whack — the previously-announced opener for the night — gave a concise performance of unwavering quality and authenticity, indicating to her Denver fanbase that she’s the rapper on which the music industry will rely for creativity and acumen in the coming years. In the spirit of Phonetopia’s conflation of the material and the digital realms, Whack blurred boundaries between audience and performer during her set, symbolically dissolving the physical boundary of the stage by pulling an event photographer and a fan up onto the raised platform with her. She evenly balanced hits from her smartly crafted 2018 audiovisual album, Whack World, with singles like “Only Child”, “Clones” and “Unemployed,” which dropped earlier this year. This forward-thinking structure stipulates that the best is yet to come for Whack, and she definitely inducted new fans with her first Denver performance. – Josie Russell 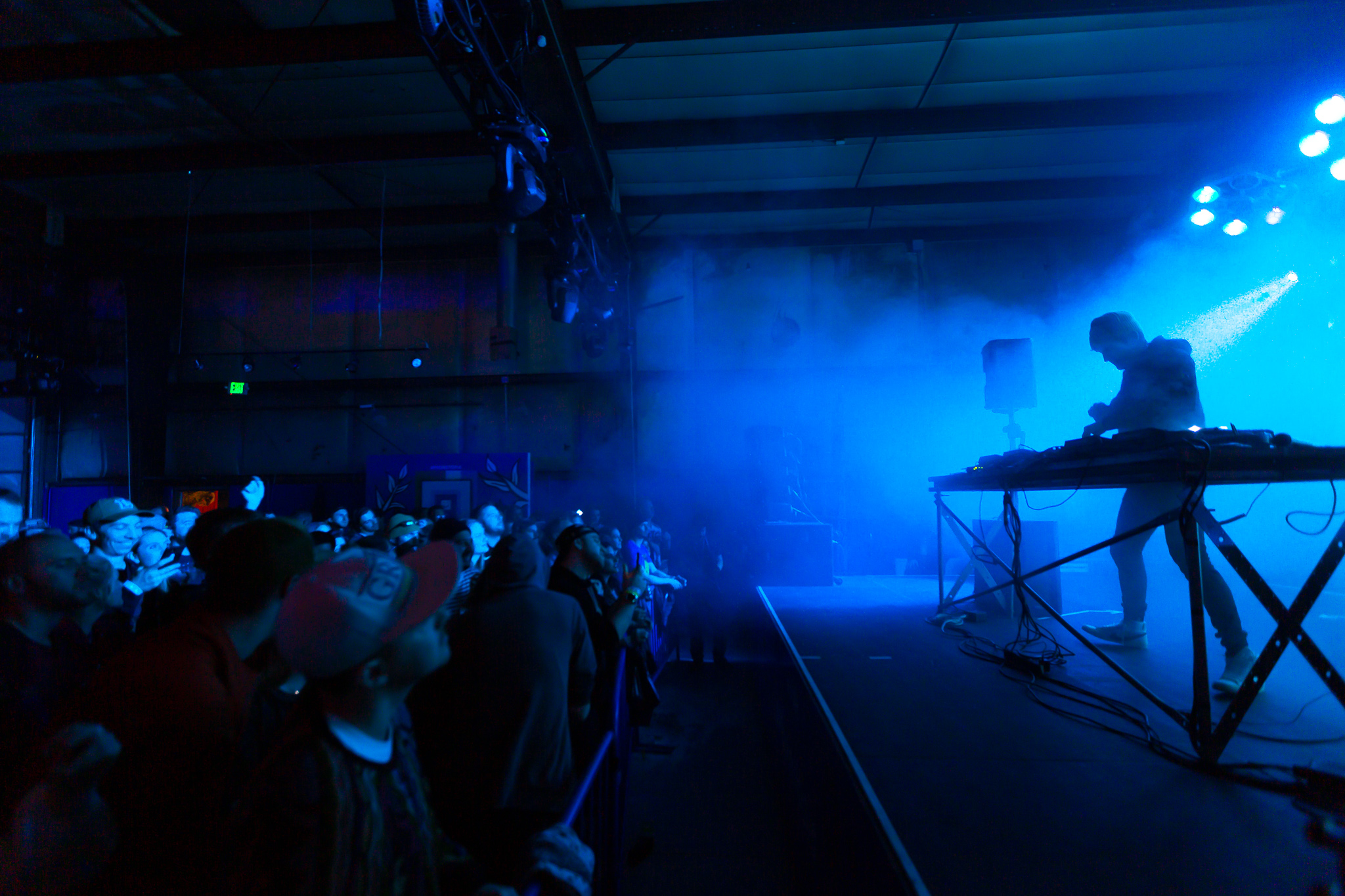 Following his unique phone-free show this summer, GRiZ’s performance at Phonetopia seems like a far cry from the GRiZ’s goal to keep fans present in the moment. However, for anyone who follows the artist, his excitement to be a part of a one-of-a-kind experience is very on-brand. Captain of a ship headed straight for good times, Griz’s Phonetopia appearance lived up to the fun-loving DJ his reputation promises. Unfortunately for the excited beat-lover, though he had charted a path straight to an island of fun, the audience was never fully on board.

While Griz grooved on stage, many attendees focused more on their conversation than on the bass pulsing through the warehouse. Despite being an intimate evening with a wildly popular artist, the evening felt more like a party at a college fraternity than the unique experience it was. With attendees focused more on their drinks and conversations, it took prompting from the GRiZ to get fans to dance, and when they did finally dance, it was only a brief moment of movement before they returned to their conversation.

Unhindered by the lack of enthusiasm from the crowd, Griz continued to bounce behind his DJ equipment as he hosted his own personal party on stage. A small number of fans in the audience could be found dancing the night away, however, they seemed to be the exception rather than the rule. Despite GRiZ’s enthusiastic performance — which held true to his reputation as one of Denver’s favorite DJs — the energy of the audience ultimately failed to live up to the excitement of the experience. – Mariah Hansen