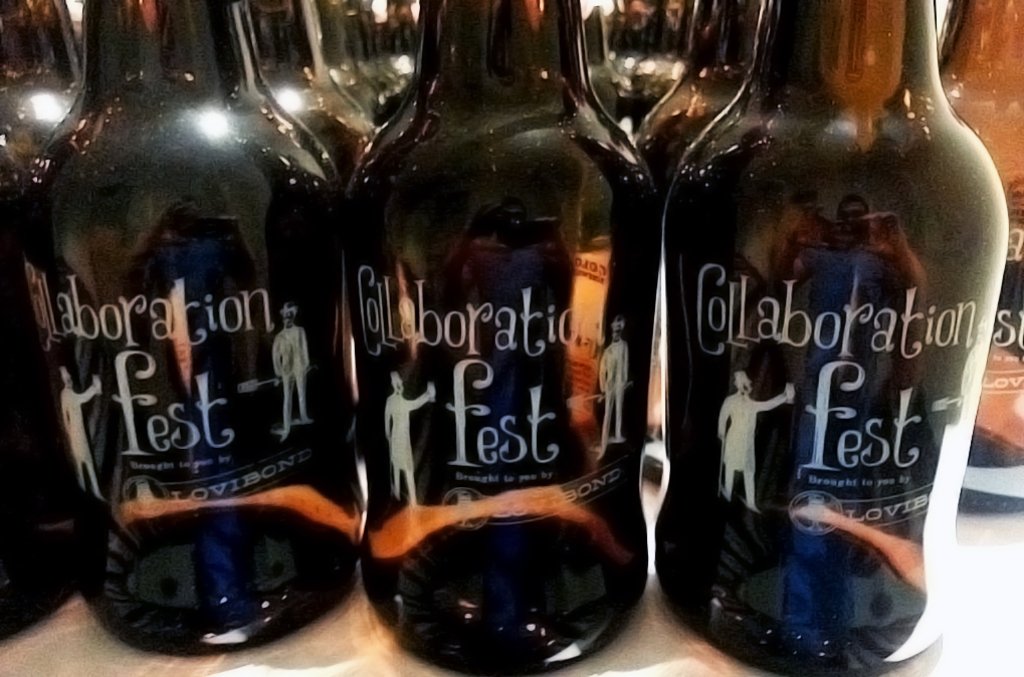 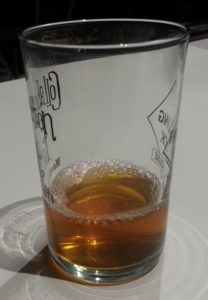 Pros:  Colorado Brewers showing off their skills and teamwork

For this year’s Collaboration Fest, brewers from around the region teamed up (including breweries from out of state) to create new and unique beers to highlight the collaborative nature of craft brewing.   We’re talking about an event with over 1500 attendants and three rooms of over fifty unique and interesting beers made by Colorado’s best and brightest.  How exactly is a writer supposed to focus?

The obvious answer is to do a critique of all the beers in attendance.  But let’s be honest, if I sampled 50 beers in four hours, someone else would be writing this article from the notes they found after my hospitalization.  Then it hit me:  It’s March.  Let’s do a “Brew Madness” bracket pitting eight beers against each other.  The rules are:  1./  The beers have to come from breweries I’ve worked with in the past.  2./  Any winners have to be re-tasted in the final four and again in the championship round. Here are my results:

Round one:  Galactic Highway vs. Southern Colorado Collaboration

Galactic Highway is the beer brought to the event by Upslope and the Denver Beer Co.  The light body and pleasantly fruity aroma from this wheat beer made it one of the most drinkable beers of the day.  Its opponent was a hoppy wheat pilsner made by Pikes Peak, Bristol, and Phantom Canyon. At 5.3% abv, it was also an easy drinking session brew.  It brought a good malt smell, nice amber-yellow color, and respectable head and lacing.  Its nice bready taste and light bitterness gave it a flavor like pleasantly buttery bread.  While it put up a good fight, I got a 16 oz can of Galactic Highway in the mail prior to the event, and unfortunately, I am susceptible to bribery.  Winner:  Galactic Highway

The Wheat Wine presented by Station 26 and Former Future was one of the most interesting and creative efforts brought to Collaboration Fest.  What I sampled was a base wine, but they also presented a winter version and a summer version, each highlighting aspects of its season.  The base had a wonderfully fruity, spicy taste that reminded me of Christmas and nicely tempered the alcoholic burn of its double-digit abv.  Its opponent was a Raspberry Brett presented by Cannonball Creek and 12 Degree Brewing.  Yes, I have yet to report on either of these breweries, but come on!  This was the one brew in the whole of Collaboration Fest to use brettanomyces and I wasn’t about to pass it up.  It had a wonderfully sour smell and nicely balanced fruit sweetness that I found really enjoyable.  But the killing blow was its significantly lower abv, which made me much less likely to overindulge at the event.  Winner:  Raspberry Brett.

Fat Slim IPA was presented by Oskar Blues and La Cumbre.  Yes, I’m breaking my own rule again by including them, but as I was searching for my eighth beer, the Oskar Blues barman noticed my empty beer glass and filled it when I wasn’t looking.  Customer service like that can’t go unrecognized.  It has a yellow/straw color and a nice, light, drinkable mouthfeel that I really appreciated.  The spicy aroma gave hints both of bitters and of fruit, and the refreshing taste really made this brew a contender.  Facing off against it was BMF Red IPA by Bootstrap Brewing and Eddyline.  It had a good bitter flavor and a pleasant aftertaste that hung around in my mouth like a great sandwich, but without the full belly afterwards.  Fat Slim put up quite a fight, but BMF edged them out in the end.  Winner:  BMF Red IPA

The Welcome Beer was brewed and presented by the Colorado Brewer’s Guild, who helped organizing the event, giving each patron a glass of it upon entry.  What they presented was floral, lightly hoppy, and refreshing.  A great introduction to an event awash in drinkable session brews.  Its amber color and nice head held even though my beer had been sitting for several minutes before I drank it.  Its opponent, Unite Pale, was the result of a collaboration between women brewers from Pike’s Peak, Red Leg, Trinity, Great Storm, Fieldhouse, Paradox, and Bristol.  Its light, refreshing, effervescent texture left my mouth feeling clean.  While the Colorado Brewer’s Guild obviously knows its way around a mash tun, I have to give this one to Unite.  Winner:  Unite Pale

The subtle fruitiness of Galactic Highway combined with itsmanageable abv makes this easily one of the most refreshing beers I’ve ever had.  It’s complex enough that I had to find my own quiet corner of the festival to give it its due consideration.  I definitely detected passion fruit and mango, and towards the end of the glass, I swear I caught hints of melon.  It has great head and lacing, and its wit color was a standout.  Unfortunately, the tartness of the Raspberry Brett balanced against the light sweetness of the malt simply overwhelmed that complexity in my mind.  Winner:  Raspberry Brett 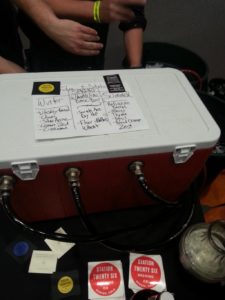 As much as I’ve groused about IPAs in the past, it is hard to argue with BMF.  The subtly light, floral aroma doesn’t punch you in the nose like a lot of hop monsters do, but it brings the bitterness in a real and almost sneaky way.  The cloudy red/brown color belies its lightness and drinkability.  Bootstrap and Eddyline have shown that they are masters of their craft.  However, my personal prejudices might have been working against them in the face of a lightly hopped, pleasantly spicy Unite Pale, because I had to give that collaboration the edge.  Winner:  Unite Pale.

I’ll be honest, I included the Raspberry Brett because I desperately wanted them to win.  It’s a style of beer that you don’t see often enough, and this beer is a shining example of the brewer’s craft.  Its red-orange color and hints of raspberry let you remember that you’re drinking beer, but includes a sweetness that brushes past the inside of your mouth without over staying its welcome.  Unite, on the other hand, is a beer that just could not be ignored.  Its good bready aroma paired with floral hops and ever-so-light hints of whiskey in the aftertaste left my mouth feeling clean, pleasant, and eager for more.  None of these decisions were easy, but this round left me in agony.  Ultimately, however, I had to give it to Unite.  The inclusion of the rye was such a simple, elegant decision that, even in the face of the beer I wanted to win, I just couldn’t say no.  Champion:  Unite Pale.

Don’t let this competition I made up fool any of you.  Every single one of the beers present at Collaboration Fest was a display of the skill Colorado craft brewers have to bring to your Friday nights.  Any of them is welcome at my dinner table, and I can’t wait for the next Collaboration Fest to spoil  Coloradans like me again.

All photos courtesy of Tressa Hodros