Let’s get one thing straight — this was my first arena show since the pandemic. My usual M.O. involves slinking around Denver’s smaller venues, catching small acts I can talk to after. But for this lineup? I made an exception. And it turned out to be exceptional. The massive space of Ball Arena overwhelms the mind until you plant superstars like Vince Staples, Kali Uchis and Tyler, The Creator on the stages. Then you can’t look away. The venue shrinks until it’s just you and the music, vibrating your bones (because the speakers in these places really are pulling overtime).

The multifaceted lineup took over for one night only in Denver, kicking off with Teezo Touchdown for a quick, 20-minute set. The rapper and his emcee kicked off a wonderfully bizarre night with their heavy-metal home improvement skit. The spraypaint-adorned garage door, the chainsaw and the Madonna poster all added to the intriguing set full of yelps from the performer. For his final moments on stage, Teezo whipped out an electric bass to help the crowd shout his name in the hopes of not forgetting it amongst the rest of the night’s bill. 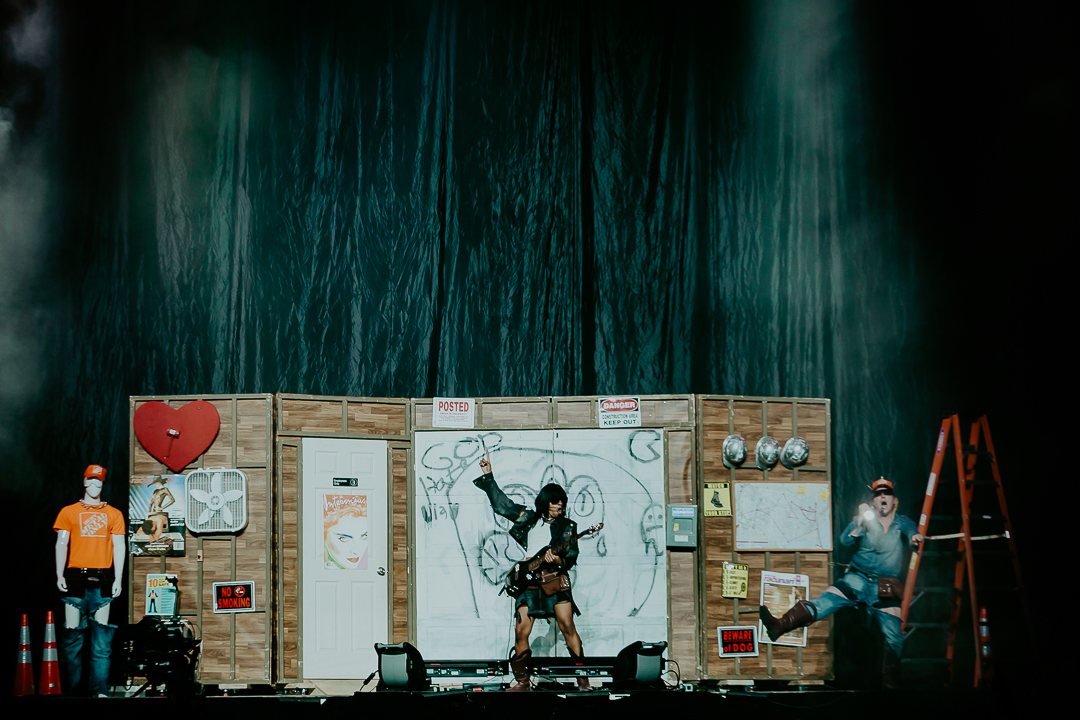 After a smattering of applause from the sufficiently-hyped crowd, Teezo made his exit. The audience only had time for a quick breath before the next contender. Vince Staples rose from the rolling smoke onto a burning blue platform, captivating the audience with only himself and the hi-fi light show. Staples brought the filthiest beats and cleanest bars with a flow to rival a river. The bass alone reverberated in your throat. Staples paid intense attention to the audience — a true hype man who made each in-between feel like a personal conversation. “I know I ask this a lot but… it’s ’cause I care. How are y’all feeling tonight?” Staples’ question was met with roaring applause. Ending on his current single, “MAGIC (feat. Mustard),” felt bewitching as the ending horn section played Staples out. 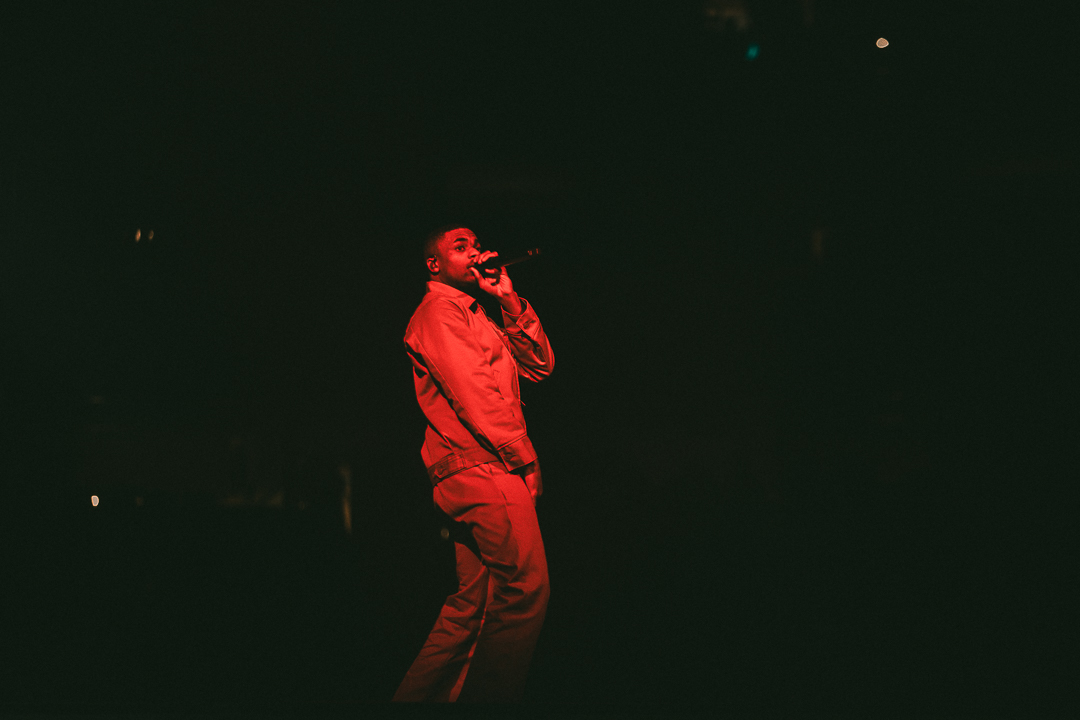 Heavy anticipation built as a rumbling settled over the arena. Screams peeled out from different sections, escaping excited lips. Suddenly, the curtains literally dropped, revealing Kali Uchis in all of her mystery. Her dancers crawled out from under the stage in sheer black bodysuits as the beginning of “Dead To Me” rushed over the crowd. Uchis hardly needed to touch the mic as the crowd sang every lyric with her. Throughout the performance, sensuality dripped from the frills and crystals gracing Uchis as pink and red lights caressed the songbird’s skin. As Uchis made her way to the floor to croon “Loner,” an aura could be felt radiating from the stage. Her dancers moved as one entity, occasionally capturing Uchis long enough to join in. They told stories, translating the songs’ emotions into action. Call it star power but it felt more like star fire that the songstress created — a ritual in which we all sacrificed ourselves to the hands of Kali Uchis. She held an undeniable power with the crowd wrapped around her little finger, hanging on every alluring note and hip swing. For her last song, the crowd grooved to the popular single “telepatía.” All too soon, she left the stage, leaving the crowd yearning.

Desire pervaded the arena, building as the anxious audience waited for Tyler, The Creator to take the stage. A sea of sweater vests, platinum blonde wigs and fluffy white hats fell into place once the man of the evening, Sir Baudelaire himself, graced the stage. The rapper rolled up, rising from below the stage in an “mmm, whatchamacallit?” The signature Rolls-Royce featured the rapper hanging out of the sunroof for the opening six songs, in almost the exact order featured on Call Me If You Get Lost. Tyler is nothing if not an exceptionally physical performer. He threw his body around the stage, crouching and kicking and screaming all while dancing in his awkward-yet-impeccably smooth way. The audience ate it up, stunned at his ability to stumble-step around the baby blue mansion build on stage, an emblem of the “Call Me If You Get Lost” Tour. The man bleeds rhythm and the crowd bathed in it. 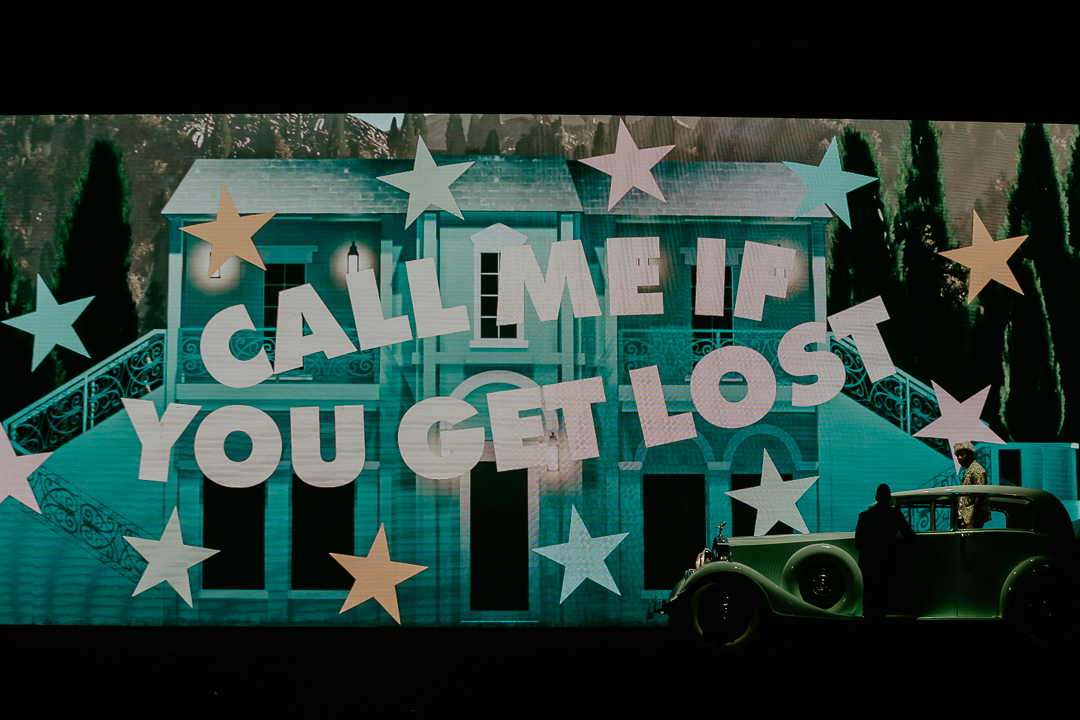 Tyler has always held on to an interesting aesthetic intersection of class and anger — deliciously ugly lyrics growled over beautiful flutes. That same chaotically brilliant energy could be felt throughout the long night. People lost their minds, if nothing else, screaming even during the slow songs. Who else to call when lost but Tyler himself? As a boat appeared as his chariot, “WUSYANAME” began and the rapper was carried to the B stage as the GA front row struggled to reassess their places. The intensity held up as he took the grassy second stage for hits such as “See You Again (feat. Kali Uchis)” halfway through the show. Much like Uchis, Tyler hardly vocalized during his first major hit as the crowd’s sheer volume overpowered the mic. Instead, he danced among the brush and blushing lights until a stripped-down, alternate ending that felt incredibly intimate. The rapper ran through eight minutes of old bangers before returning to the main stage — his self-proclaimed favorite part of the night as he got to watch people pretend to know the words. 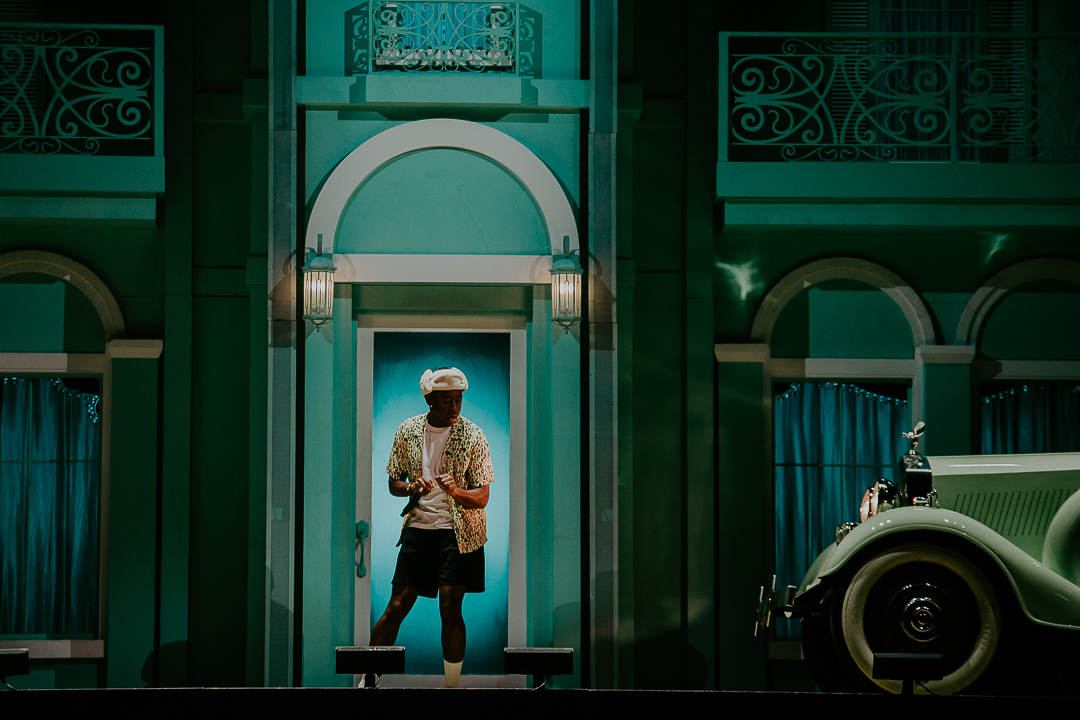 As he returned to the mansion, the crowd of soldiers reassembled into unruly lines, saluting the OG flower boy. “There’s one album I haven’t played anything off of yet…” the performer hinted. He was met with an entire arena chanting “IGOR” back at him. The white baby grand rose from where the Rolls-Royce had been, and Tyler took a slow moment to serenade the crowd before heading into crowd-favorite “EARFQUAKE.” And shake the earth it did. The last 15 minutes of the show — which featured mostly songs from his Grammy-award-winning album IGOR — fell into a frenzy of pyrotechnics, growling and headbanging with mosh pits breaking out in multiple sections of GA. “NEW MAGIC WAND” and “RUNITUP (feat. Teezo Touchdown)” closed out the infamous night, blazing with fire both from the stage and the audience. Tyler, The Creator provided a one-man buffet with the audience eating from the palm of his hand. He controlled the stage with mesmerizing musicality and harrowingly-beautiful performance. It is an impressive feat to be able to command the stage like that as one person, even without all the massive production. As the night drew to a close, Sir Baudelaire picked up the suitcases left from the Rolls-Royce, stepped into the mansion with a wave and the “Call Me If You Get Lost” Tour came to a satisfying, ear-ringing end. 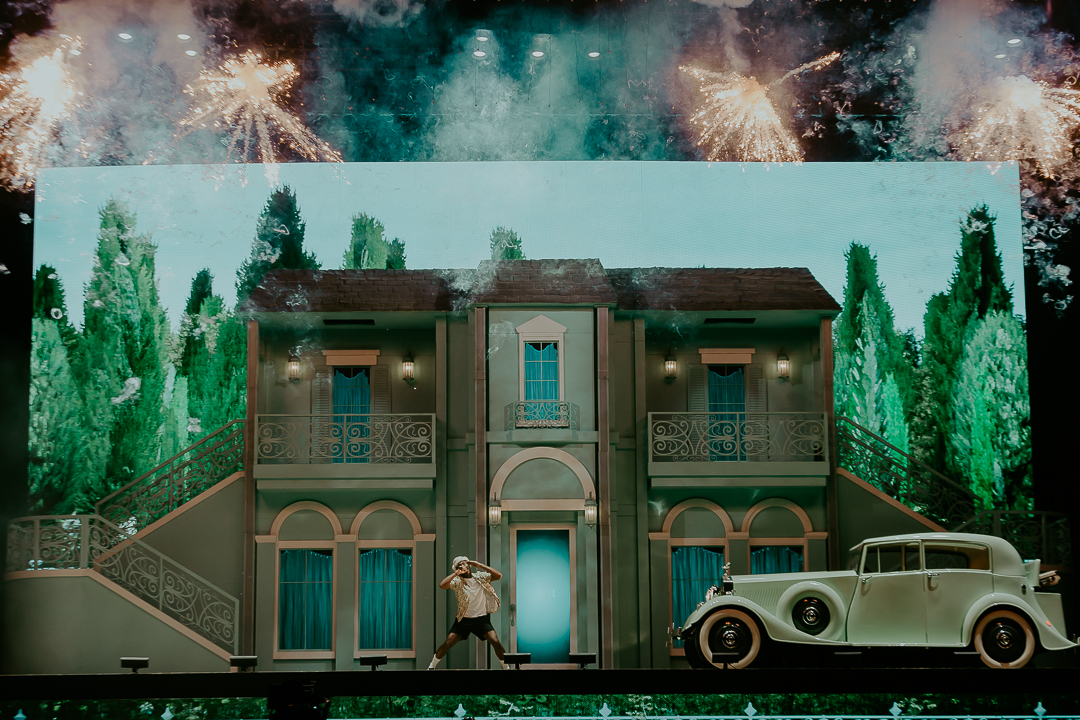