Mary Valdez in front of a mural by Elle Street Art. Photo by Amanda Piela

How One Woman Helped Commission 300 Murals in Denver

In 2018, the Denver Public Art program increased its collection by nearly 30 percent, commissioning over 60 murals through the Urban Arts Fund (UAF). The total amount of murals in the collection now totals at just over 300. Although this is a monumental task that sounds like it required a full staff to accomplish, it was all coordinated and curated by one woman — Mary Valdez. Valdez works under the Denver Arts & Venues division of the Denver Public Art program and started commissioning murals via the UAF in 2009. In the decade since, Valdez’s reputation in the street art community in Denver has blossomed because she curates the city’s walls like a gallerist.

READ: Public Art Programs to Look Out For in 2019

When Valdez first started thinking up the UAF, she came across some resistance from members of the community, historical societies and the government. People who supported Valdez told her to “call [the potential artists] aerosol artists and muralists” instead of street artists, as the latter label might have attracted the wrong attention. In the first year of the UAF, seven projects were funded. Last year there were 100 applicants and Valdez and her steering committee approved 25 projects that amounted to over 60 murals. “It has gone from calling local artists [and asking them to paint] to getting national and international ones applying for it,” Valdez commented.

Despite what some people may think, RiNo is not the only neighborhood in Denver with murals, street art and graffiti. The UAF is responsible for a large number of murals beyond the boundaries of RiNo and the areas tend to have a high rate of graffiti. In the generally accepted terms, graffiti is a style of lettering — although it’s been tied irrevocably to vandalism because graffiti writers often practice in illegal ways. The mission behind the UAF and other public art programs the city runs is to curb vandalism, and that often includes graffiti.

“We believe if we create works of art that we can help curb graffiti and vandalism,” Valdez explained. Because of this creed, most of the UAF murals can be found in former graffiti hotspots, like the Cherry Creek bike path. “There are still a lot of areas in Denver that are getting hit by graffiti and I believe our murals really create an essence of beautification and [provide] somewhere for a person to experience art,” Valdez said. “It brings a brightness of the artistic realm to the forefront. To liven up their day. It’s uplifting.” 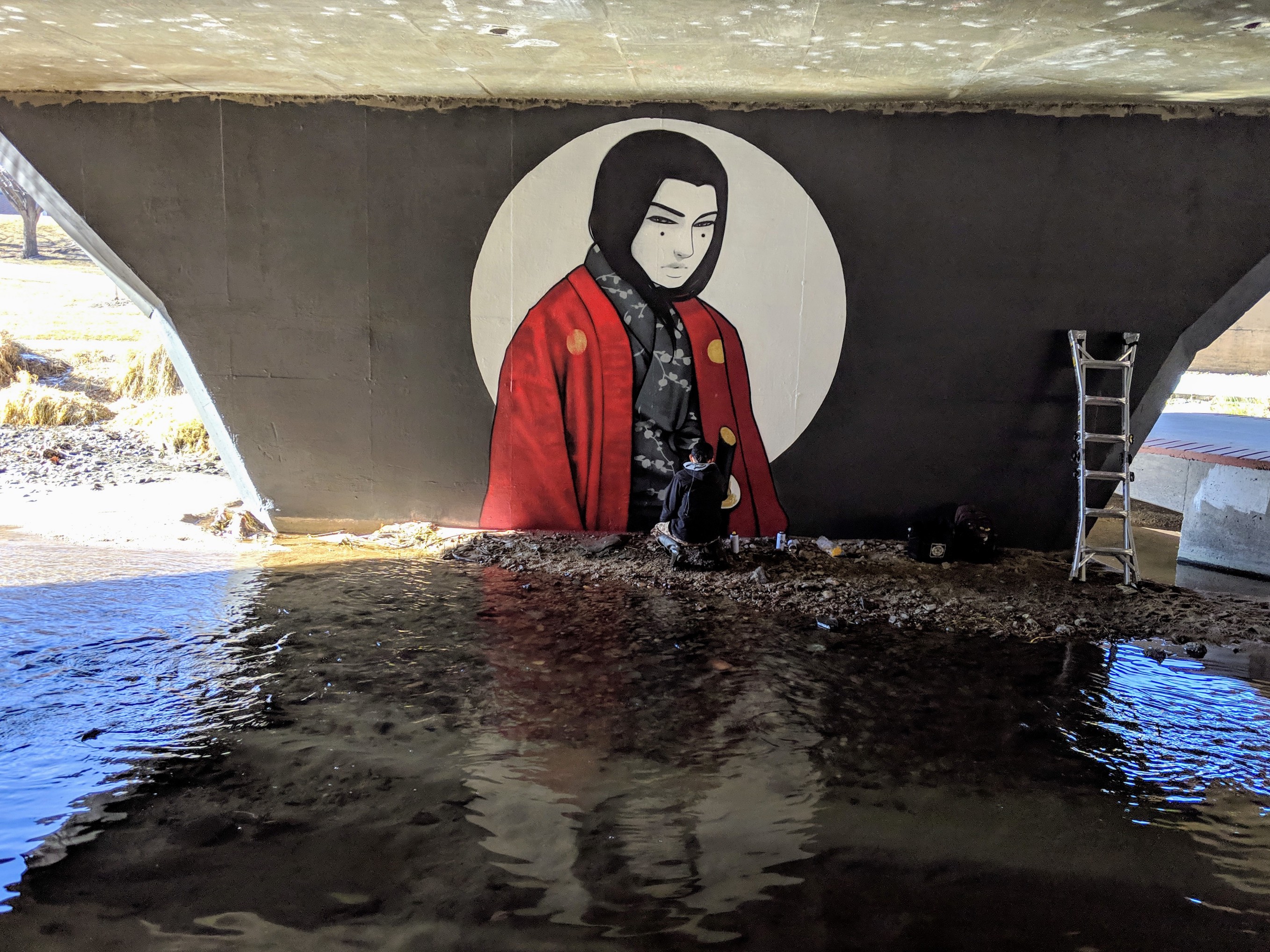 Kawaguchi working on one of his 2018 UAF murals.

One of the projects from 2018 that can be found on the bike path is by local artist Casey Kawaguchi. Although it was originally planned as only one mural, once Kawaguchi started on it, he and Valdez agreed that two more would make it even better. The location is under a bridge between Lawrence and Larimer on the bike path, where three large and wide support beams sit in the water of the creek. Kawaguchi spent a few days on each mural, wearing gators in the cold creek waters in order to withstand the temperature. It’s on a busy spot along the bike path, and although Kawaguchi said it was a peaceful experience, he also mentioned the number of curious onlookers and visitors. “I’d just like to thank everyone for the great response to this piece,” he remarked.

Another project that accumulated even more murals than Kawaguchi’s happened at Cheltenham Elementary on West Colfax. It was the fourth in a series called The Raw Project — which originates in Florida — and pairs world-class street artists with elementary schools that could use some extra inspiration. The UAF funded the three other elementary schools in Denver in 2017 and approved Cheltenham last year, securing walls for such renowned artists as Shepard Fairey, Findac, Kevin Ledo, Jazz Guetta and Birdo.

Although some of the UAF murals garner attention because the artists are internationally recognized, others are significant because they give local artists an opportunity to paint big walls. DINKC‘s 2018 UAF mural embodies that because it is his largest mural to date and sets the stage for what we can expect from the street artist in the coming years. Located at the corner of Mariposa and 8th Avenue on the Lincoln Park Lounge, the mural covers three walls of the slender, rectangular building. “Mainly the biggest thing for me was being able to paint something in my own style on a public space, within a great community,” commented DINKC about the project. “Any and every public art piece is free publicity/promotion, you never know who’s going to see it and or what it could lead to. I do this full time… so I always try to give it my all especially if I have the budget to do so and the location trusts me enough to do whatever I’d like.”

All artists who are interested in painting murals around Denver are encouraged to apply, and though Valdez’s schedule has been nonstop for the last few years, she welcomes more applicants all the time. “As a Hispanic woman and someone in this position for a long time, I want to bring more diverse people into our collection,” she commented. The application process happens from February to March (for the following year) with notifications sent out to artists at the end of April. Projects typically begin during the warmer summer months and continue until the end of the year (or as long as weather allows). Valdez oversees all of the projects herself, although she also retains help from a steering committee (who she hand-selects), and therefore puts her essence into every mural funded by Denver Public Art. As the future of public art and murals in Denver progresses, it will be hard to ignore Valdez’s impact. 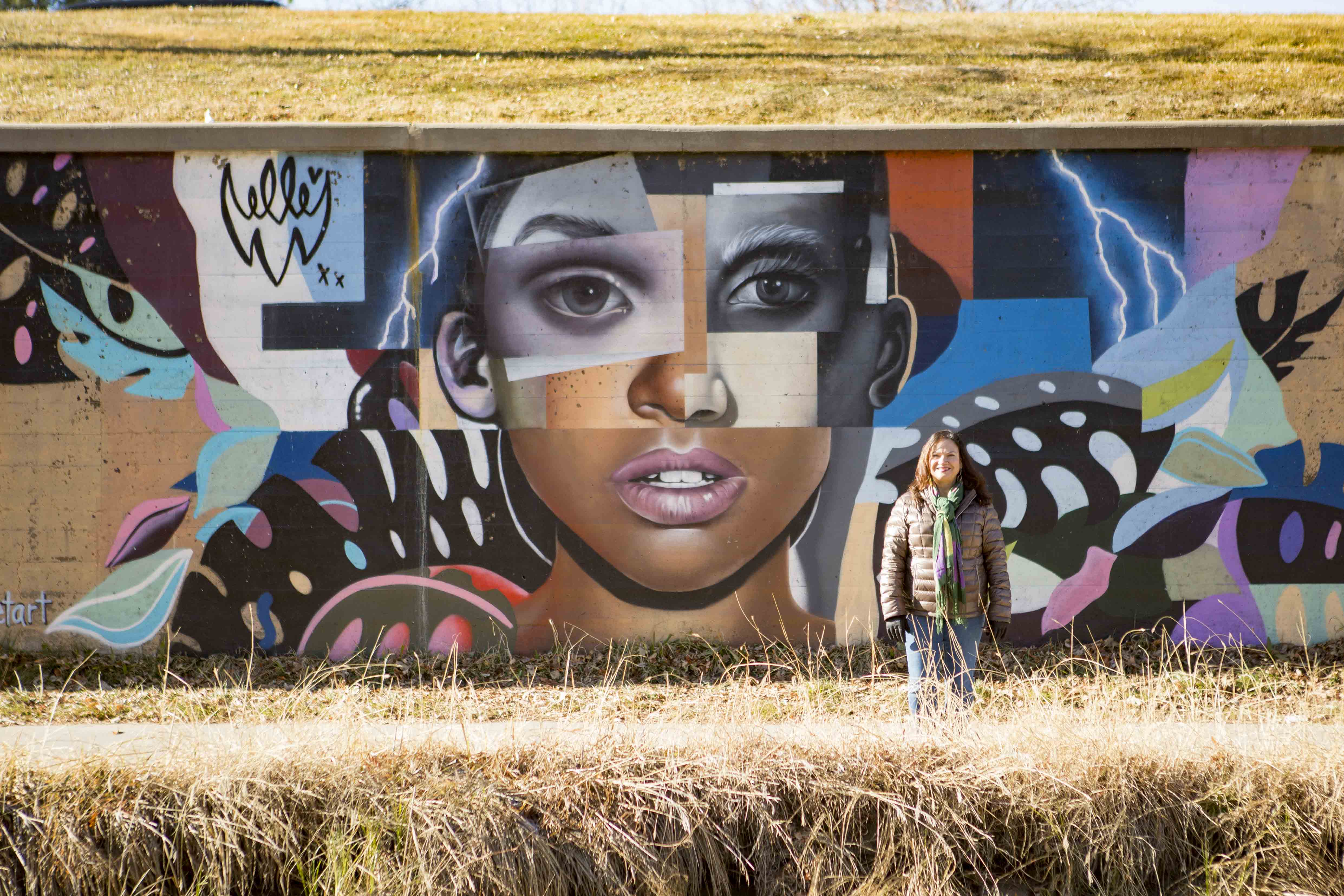 Valdez in front of a mural she commissioned in 2018 by Elle Street Art. Photo by Amanda Piela

In order to keep up to date on all of Denver Public Art’s projects, visit their website where you can search for specific art, put together your own guided tour and learn more about each artist.