Gentrification Through the Eyes of Artists – Thomas Scharfenberg

This is the last of an ongoing series about gentrification and art in Denver. We will highlight five local artists and their unique perspectives on the phenomenon by showcasing their work, as well as their thoughts on how gentrification has changed the neighborhoods they call home. To see the full introduction, visit Volume 1, Volume 2, Volume 3 and Volume 4. 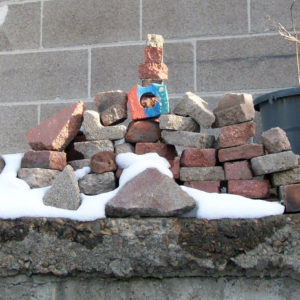 Let’s get one thing out of the way, Thomas Scharfenberg doesn’t like the terms art, artist or gentrification. “I’ll use them, but in my head they’re crossed out,” he said. This makes him either the most qualified person to discuss his work in relation to gentrification, or the least. Either way, what makes Scharfenberg stand out is the way his art avoids the discussion by being so rooted in it.

He was at Wazee Union when the owner told the artists that they would have to leave in about a year. That was in January 2015 and Scharfenberg moved out that June. “I think I’ve just been trying to stay ahead of the game,” he said. “I like to be informed and know the details of what’s going on, but at the same time you’ve got to be detached, so I moved.”

He’s still connected to the Wazee Union community that has a new building at 50th and Washington in Globeville. It’s called GRACe, Globeville Riverfront Art Center, and was opened by the owners of the former Wazee Union. They’ve invited Scharfenberg to create a mural for the new space.

If you really look, you can see Scharfenberg’s work all over, from the “Sun Valley Dumpster Beautification Community Art Project” with Anthony Garcia Sr. to his “Alternate Address” objects that show up in random places.

“That’s just kind of the street art that I do: different painted objects that I place back into the world,” he said. “They’re just refuse materials – wood blocks and bricks. I have a whole bunch of these blocks with nails on the inside and I pound them into telephone poles and call them alternate addresses. So it would be like instead of my house is 9385, its address is a gloss-coated purple sparkle block.”

The reuse of found objects and their lack of commodity recall the early objects of Claes Oldenburg and the détournement transformations of the Situationist International. Like them, Scharfenberg’s objects can show up in the least expected places without him charging anyone.

“I want to make a jab at the art world by having it be free,” he said. “It’s just ridiculous, the money aspect of art.” 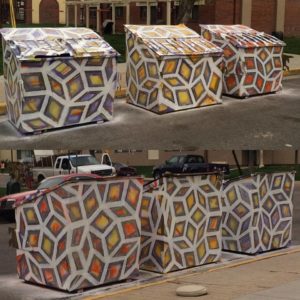 That’s a big reason he’s been making so many murals and was part of the Dumpster Project. “Part of my anti-commodity thing is I’m anti-gallery, to be honest,” Scharfenberg said. “I like more of the independent scene. I want to live comfortably–I need money–but I sort of want to reject this dirty business side of what happens with art.”

It seems like a bold move for someone who graduated from the Rocky Mountain College of Art and Design in 2007. He has a part-time job in a greenhouse for some extra income, but is becoming busy enough that he doesn’t really need it. The only reason he keeps that job is because it keeps him hungry to make more art, which an apt adjective for his art making.

“I like to think of my work as different flavors–different recipes,” he said. His process for creating public art starts by feeling out the surroundings of where he’s painting. In the case of the recent mural he painted for LowBrow on Broadway, he hung around the shop, sketching and becoming absorbed in the environment. “It’s really noisy here and that’s my soundtrack–the traffic, and the neighborhood with the dumpsters, or at Wazee [Union] with the trains, or Rhinoceropolis with the music and the sounds.”

His largest example of art so far is located at Rhinoceropolis. It’s basically a living mural that covers all the walls and is constantly being worked on. The work in the venue and the Dumpster Project have an unexpected relationship in being blank spaces screaming for some renewed energy, which Scharfenberg elucidated.

“With the Dumpster Project, what I see that’s good about that is: a dumpster is a great space that’s not an ugly space, but it’s an unused space,” he said. “Personally, I want to use those types of unused spaces for–actually, I don’t even like the word ‘art’, but for making it more special by highlighting it with color, shapes and patterns–just mixing the energy around in these neglected areas.” 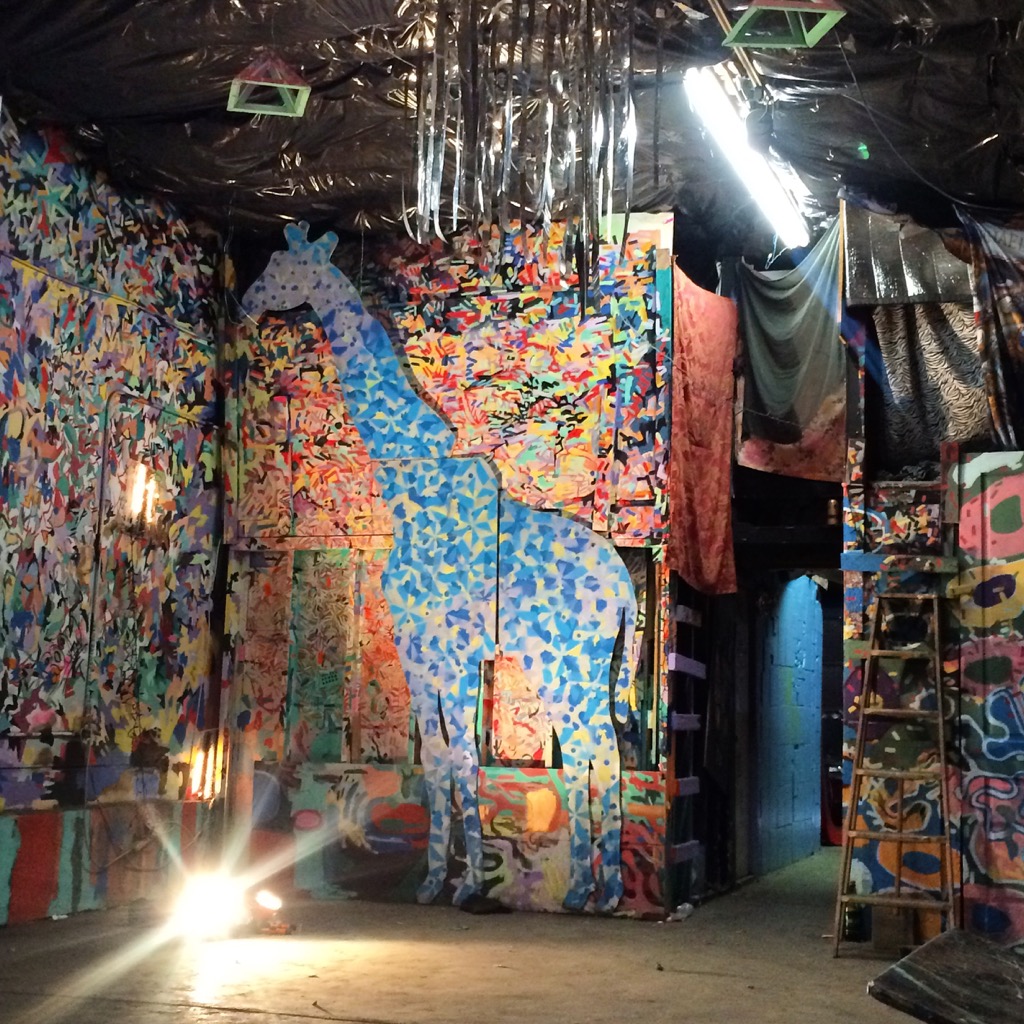 Interior of Rhinoceropolis by Thomas Scharfenberg

Neglected areas are where Scharfenberg is most comfortable and finds his inspiration. What he looks for most is the freedom to do his work without the demands of the art world or patrons. It’s a great way for him to stay out of the drama and stay positive, which is why he moved out of Wazee Union with a plan to create his own path. 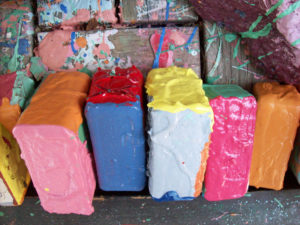 Now he’s living in Elyria and is focusing on remaining an independent artist. You can find some of his found objects, which he calls “Physical Pixels”, at LowBrow, and he’s developing some projects with the GrowHaus, which is located across the street from his home.

He’s also continuing his work at Rhinoceropolis and is planning the next installation of “Fantasia.” The three-day event will take place August 12 through August 14, and will be a celebration of the collaborative efforts of those involved with the DIY venue.

“The block that Rhinoceropolis is on is really getting demolished and we’re reusing the trash to build the installation,” he said. “It’s to say, “Fuck it. We’re here and we’re going to do whatever. We’re just going to roll with it.”