Gentrification Through the Eyes of Artists – Derrick Velasquez

This is an ongoing series about gentrification and art in Denver. We will highlight five local artists and their unique perspectives on the phenomenon by showcasing their work, as well as their thoughts on how gentrification has changed the neighborhoods they call home. To see the full introduction, visit Volume 1 and Volume 2. 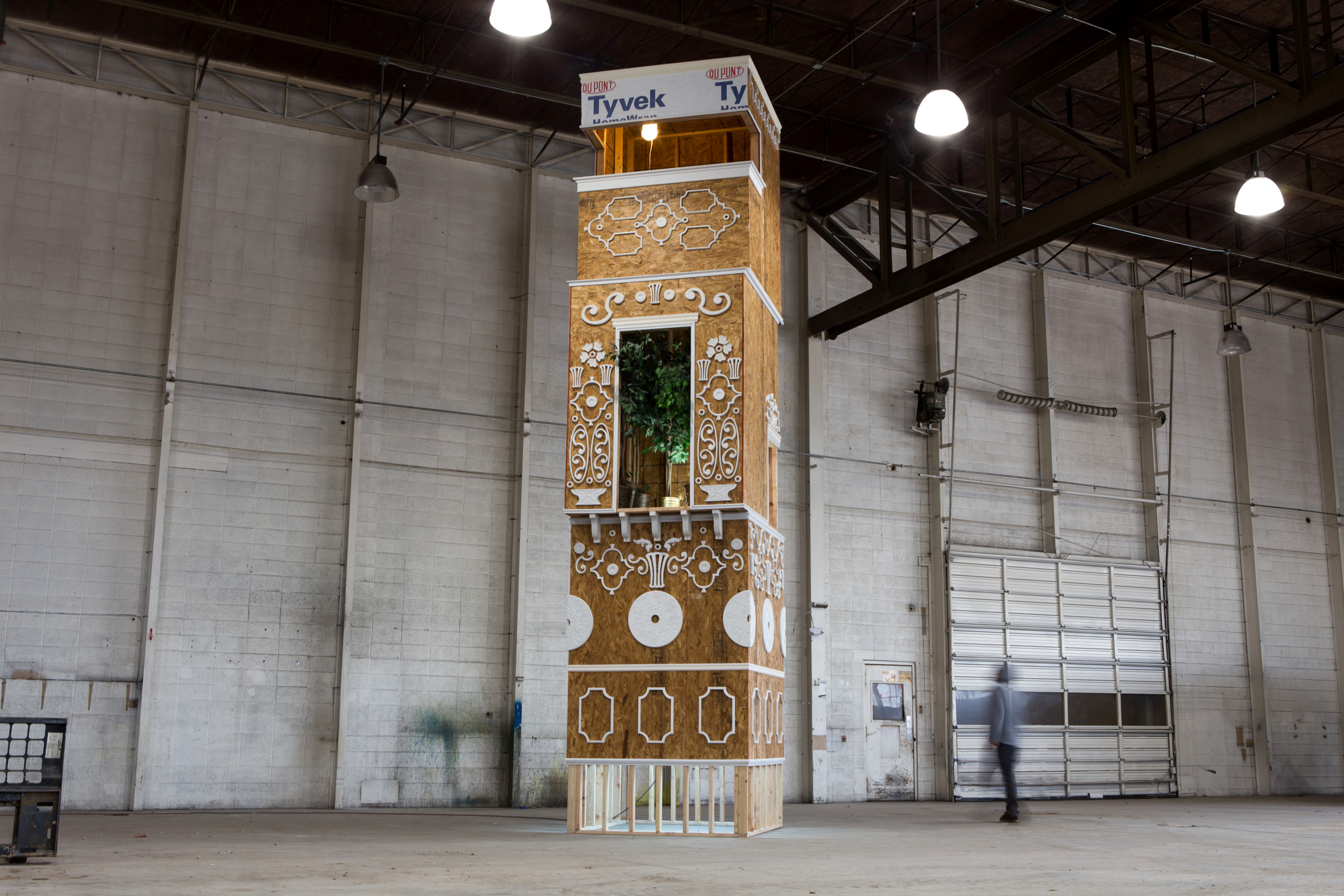 “New Brutal” in the Stanley Marketplace

Derrick Velasquez has been living in Denver for seven years, is a co-founder of TANK Studios on South Acoma and is an alumnus of the nomadic Black Cube museum. He is probably most well-known for his sculptures made from vinyl, gravity and wood. The majority of his work focuses on how materials react to natural and man-made forces, but the pieces especially rely on observation, which is how Velasquez came to make his “New Brutal” series in 2014 and 2016.

“If you drive on I-25, it’s like you see this whole row of Tyvek,” he said. The accessibility of the materials of new housing developments makes for an interesting relationship between quality and quantity, as well as familiarity and accessibility.
The first “New Brutal” was located in the Stanley Marketplace, a private warehouse currently being transformed from its former life as an aviation building and located on the literal edge of Aurora. On the other side of the Stanley’s property fence is Stapleton and Denver, giving a perfect location to comment on the status of Aurora’s lack of accessibility to economic improvements.

“They have different rules, they have different municipality and city rules,” Velasquez said. The economic differences between Stapleton and Aurora specifically manifest in the variations of home ownership among the cities. In Stapleton, 73.3 percent of the population owns their homes, while 57.3 percent of Aurora‘s residents own theirs. Stapleton’s ownership is well above the national average and Aurora’s is below. So, while Stapleton seems almost utopic with its new, modern structures, its neighbor seems stagnant, patiently waiting for its own improvements.

While reality is much more complex, breaking the situation down to its simplest terms is the best way to discuss “New Brutal.” The location and materiality of the first structure in the series is important when understanding Velasquez’s criticism of new architecture.

When the structure was complete, it stood at 25-feet tall. It rose three and a half stories and was inaccessible in two ways. Not only were the openings – the faux doors and windows – too high for anybody to access, the Stanley was still under construction so visitors could only see the structure by appointment. The phenomenological imposition of the structure would have been intense for some viewers.

“The physical structure of this tower I think off-put a lot of people,” Velasquez said. Which he was fine with. “It was meant to feel pretty sterile. I knew I had this 100,000-square foot warehouse, and to place this thing that was only six foot by six foot in a footprint in a very dark, weird industrial place was pretty apparent.” Isolation and disconnection inevitably affected viewers as they confront the large structure within the otherwise empty space.

The sterility of the structure was slightly interrupted by the ornamentation that was inspired by European and Middle Eastern ornamentation. The inclusion of the ornamentation also explains the title of the series: “New Brutal.” As an architectural form, Brutalism was characterized by the raw concrete of its walls and its deliberate plainness – some would say ugliness.

In Britain, the Brutalist aesthetic was inspired by Le Corbusier‘s béton brut (raw concrete) structures and would first be seen in massive, low-income housing units built by the post-World War II government. The buildings are still controversial and are either accepted or downright hated by residents. Velasquez’s ornament comments on the recent construction of apartment buildings that are just as plain but feign individuality by including useless ornamentation. 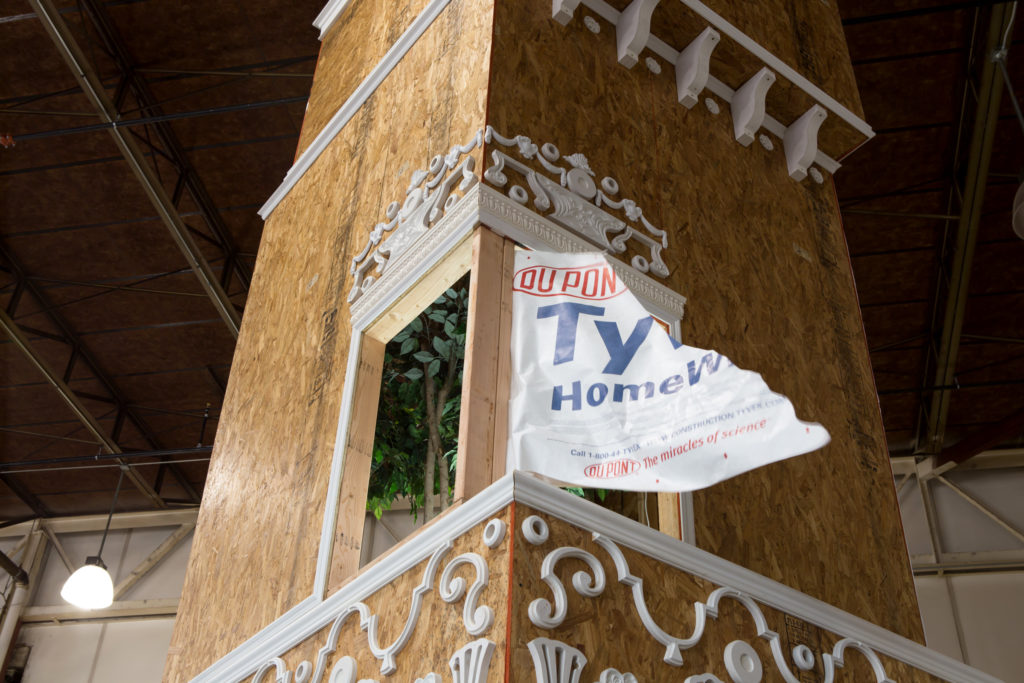 The conceptual aspect of the first “New Brutal” dealt mostly with construction and inaccessibility, but understanding its role helps explain the much more pointed critique of architecture’s contribution to gentrification in “New Brutal 2.”

“New Brutal 2” continued the basic aesthetic formula of its predecessor, but two major factors changed: its accessibility and its location. Instead of rising 25 feet into the air, the second structure was vertical. And instead of existing in a private warehouse, it was placed in the amphitheater of Lincoln Park, right next to the La Alma Rec Center and in the middle of the Mariposa nine-phase restructuring. The presence of the RTD light rail at the 10th and Osage station forced the changes on people living in the area.

“I lived on 9th and Santa Fe for about my first six years in Denver, because I teach at Metro, I basically biked by that park all the time to get to campus,” Velasquez said. His familiarity with the area and the people was challenged when he saw the new mixed-income housing development being built where previous project housing was.

“I have no idea what’s going to happen with this housing,” he said. “I don’t understand the dynamics of the interior and what that means for the exterior – that the exterior looks the same and yet the interior is apparently set up for different economies.” 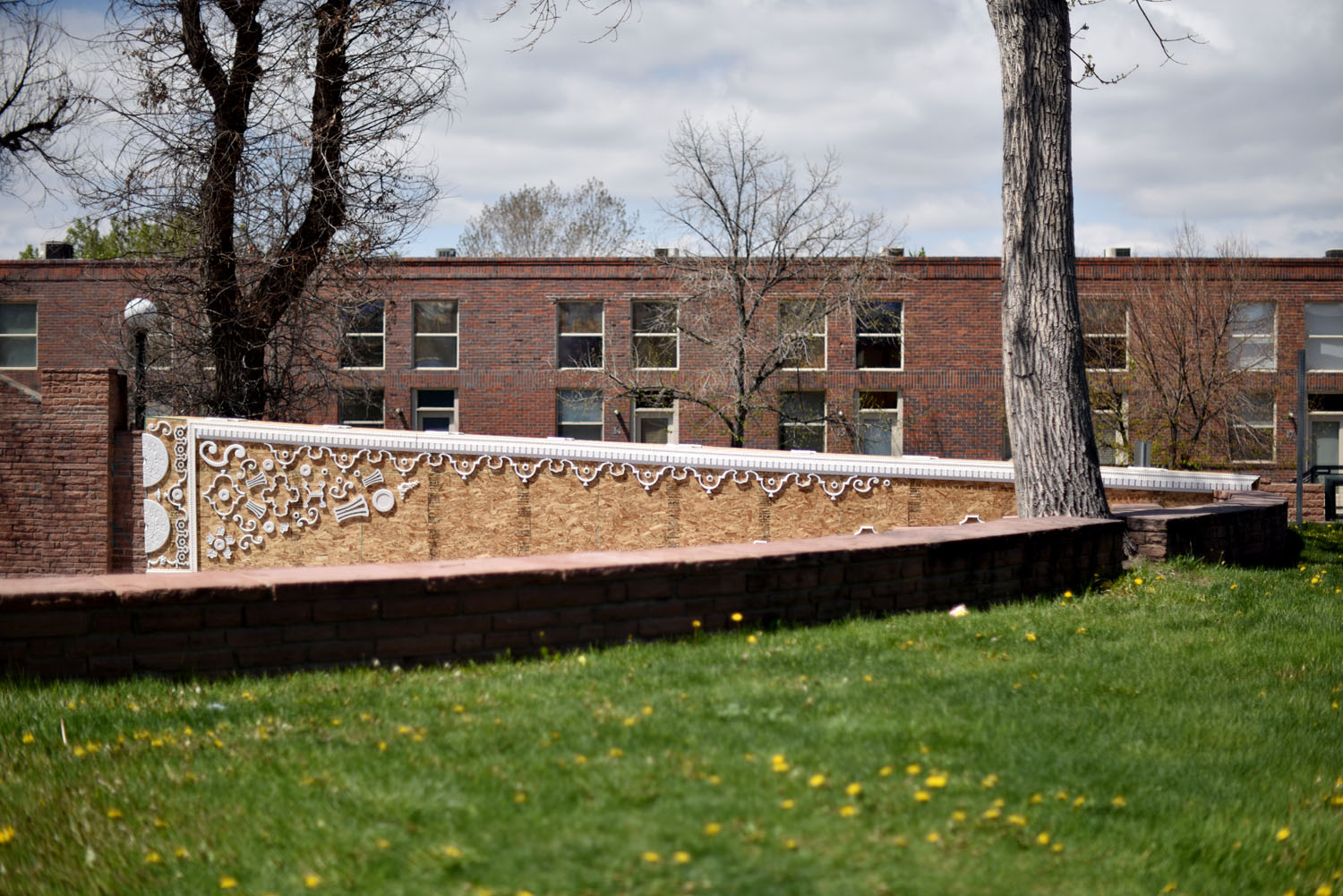 By questioning the relationship between the interiors and exteriors of these new buildings, Velasquez inadvertently recognized the difficult relationship between art and gentrification. “A lot of times art becomes a hallmark for gentrification,” he said. “As an artist you’re supposed to be engaged socially, but to speak for a number of people is literally impossible and became a weight that I didn’t know existed within the art community or within the existing community that the thing was placed in.”

However, through his installation of “New Brutal 2,” he was able to personally connect with the people who have been most affected by the recent development in the neighborhood. “There were kids who came by who used to live in those projects and they’re like, ‘People just came in about two months before and told us we had to move.’ And they’re like, ‘Well, where do we move?’ They’ve moved twice since then,” he said. “They moved twice in a year because those projects were displaced.” Those kids had to move to Englewood but continue to commute to go to their school and go to the Rec Center to be with their friends. “Having those interactions with the kids and the people still in that neighborhood, or even people who are still connected to that neighborhood was pretty profound for me,” Velasquez said.

That interaction also extended to the installation. While graffiti was expected – and would have been welcomed in all likelihood – another factor amplified the function of “New Brutal 2.” During the de-installation, Velasquez found the belongings of a homeless person who had used the structure as shelter. Both projects had exposed understructures that used two-by-fours to lift them off the ground enough to crawl under. Velasquez hoped someone would be able to use the structure because he also understands that the homeless are just as affected by gentrification as the residents.

Velasquez has been reflecting on the series and its effectiveness of being socially engaged, which is important because it shows how art and artists are constantly evolving in response to change. The original structure implicitly evokes gentrification issues, but only when you looked for them. The second structure was still not made to address political or social issues, but the economics of the installation and its location forced the conversation.

That is the fate of public art whether the artist intends it or not, but instead of denying the additional dimension of the work, Velasquez has embraced it. “I’m definitely not afraid to engage with that or to step away or to dive head in,” he said. “It’s been a learning experience in that way, for sure.”

To see more of Derrick Velasquez’s work, visit his website at Derrickvelasquez.com 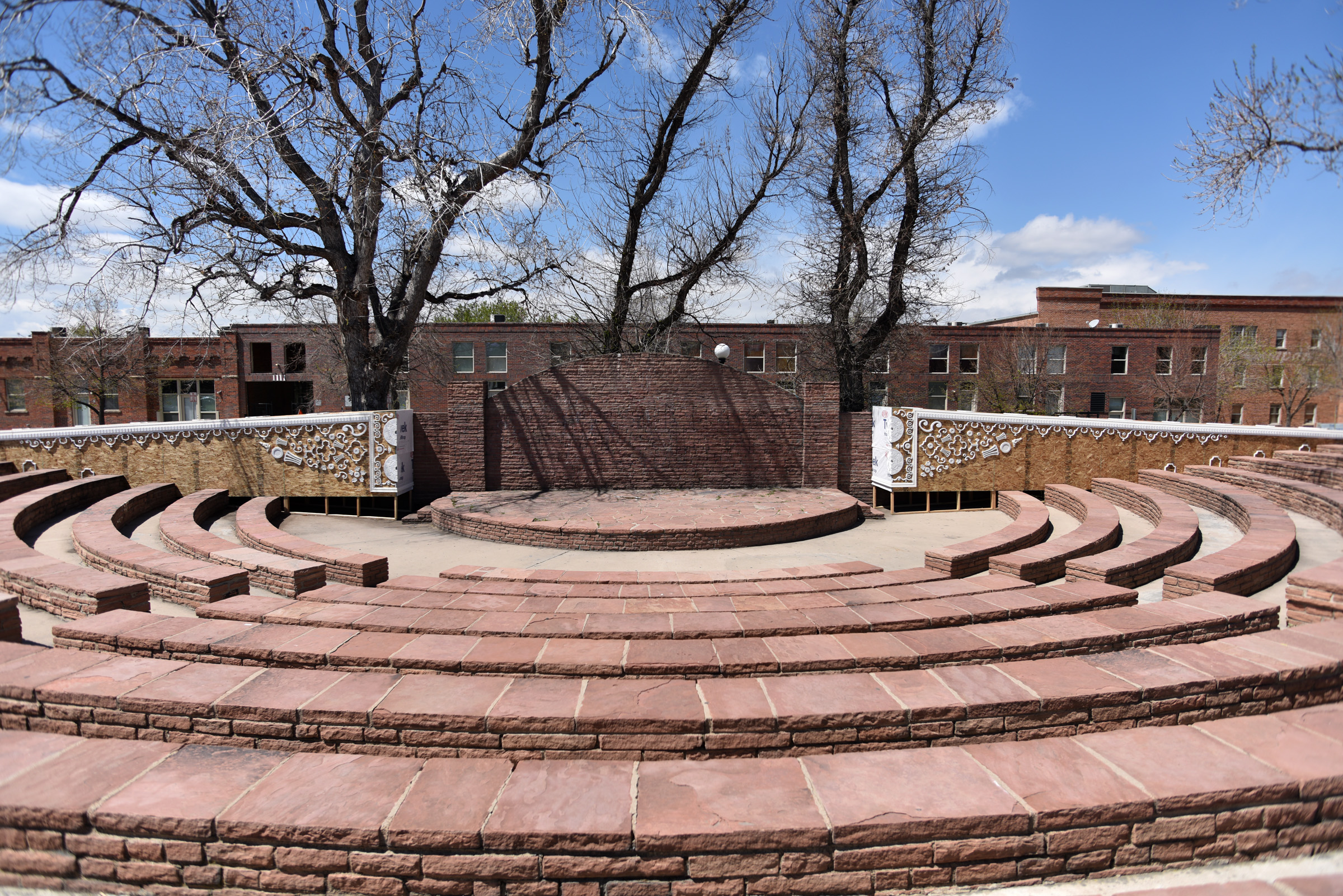