Gentrification Through the Eyes of Artists – Sarah Rockett

This is an ongoing series about gentrification and art in Denver. We will highlight five local artists and their unique perspectives on the phenomenon by showcasing their work, as well as their thoughts on how gentrification has changed the neighborhoods they call home. To see the full introduction, visit Volume 1.

The refacing of Denver has created a visible manifestation of the double-edged sword of gentrification: newly-built apartment complexes with shiny amenities complete with people who are sleeping on the sidewalk just outside the secure door. This is the dark side of gentrification. While some are able to take advantage of the population and economic boom, many others are left in the dust.

This is also what makes homelessness so complicated. In 2005, then-Mayor John Hickenlooper approved Denver’s Road Home: Denver’s Ten Year Plan to End Homelessness when the homeless population was estimated around 10,000. A census conducted by the Metro Denver Homeless Initiative reported that on Jan. 26, 2016, there were 3,697 homeless. However, those census numbers are likely low since they don’t account for the wide range of what can be considered homeless, and there is the gap left by people who refuse to take the survey.

Either way, the homeless are still very much a part of Denver’s population and whatever the blame for any increase, ignoring them should not be an option. Such is the reason artist Sarah Rockett is creating her most recent work.

Sarah Rockett is a current resident artist at RedLine and has been working in Five Points for the past few years. Her recent work involves the low-income and homeless communities near the center. As she’s witnessed the physical changes in the area, she’s aware of the irony of these shiny new structures being built in places where people are still sleeping on the sidewalk. How can we rationalize our want for acquiring things while seeing other human beings sleeping on the sidewalk?

That is exactly the conundrum that Rockett explored in her latest show at Ice Cube Gallery. “It Better Made of Gold” was a pointed, albeit aesthetically pleasing, critique on the American tradition of prioritizing objects over other people, an approach she began with installations like “Luxury Value.”

“It’s a lot of talking about income inequality in terms of value that we place on our fellow humankind versus material goods in an American culture that is obsessed with wealth,” Rockett said. “Essentially I’m ‘gold-washing’ instead of whitewashing stuff.”

“Instead of maintaining a “normal” appearance of the shoes, baby carriages, vases and cylinders that she appropriated for the project, Rockett chose to address the otherness of the poor by making them more appealing. Maybe by making the other more appealing, people will begin to pay more attention to the mistreatment of the poor and the homeless.” 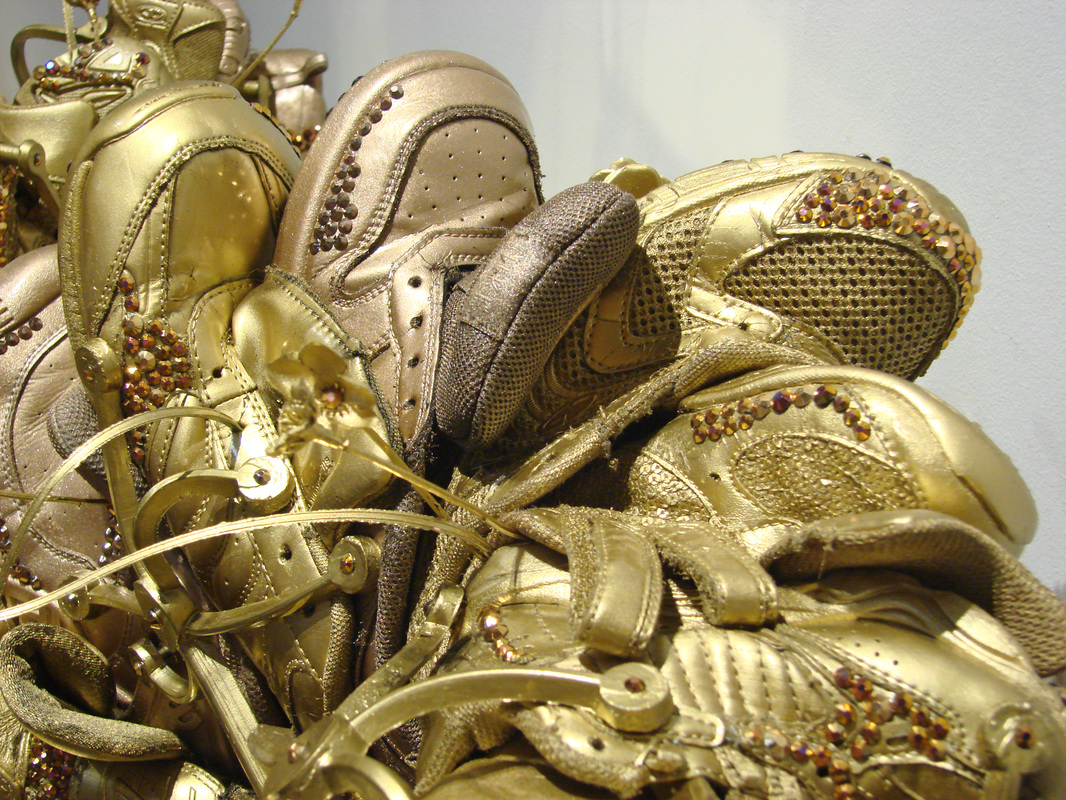 That gold-wash brings the found objects that Rockett uses into an otherworldly realm where we can somehow appreciate their value despite them being some discarded things that are worthless outside of their existence in her artwork. The sudden value added to the objects does not necessarily extend to the discarded people Rockett hopes to bring attention to, but that’s what makes the sculptural pieces so interesting.

Instead of maintaining a “normal” appearance of the shoes, baby carriages, vases and cylinders that she appropriated for the project, Rockett chose to address the otherness of the poor by making them more appealing. Maybe by making the other more appealing, people will begin to pay more attention to the mistreatment of the poor and the homeless.

“This summer I’m also going to be launching a new project that I’ll be working with the RedLine staff on called ‘The Gold Spoons Project’,” she said. “It’s going to be a way for me to raise awareness, but specifically about homeless individuals and their value as human beings within our world.”

The “Spoons Project” will take a number of spoons taken from thrift stores or the trash and transform them into unusable but pretty objects by gold-leafing them. They’ll then be presented to the homeless community to be signed in exchange for a meal. This will continue Rockett’s aesthetic while also giving a little bit back to the community that inspires her activist artwork.

“I think sometimes it’s difficult to work with the homeless community as an artist because you never want to do anything that’s going to seem like you’re exploiting somebody for your personal art project,” Rockett said. “So I think that project is going to be able to give back a little bit.”

By toeing the line of the difficult balance of helping without exploiting, Rockett furthers her own struggle with income inequality and gentrification. When asked about why she has focused on these issues, the personal and professional become intertwined.

“I think for me it’s two-fold,” she said. “One, in my own personal life I’ve dealt a lot with income inequality and poverty as an adjunct professor. So that is near and dear to my heart and I can understand how it feels to be one step away from homelessness. The other is being in residences like RedLine and PlatteForum that are in this Five Points neighborhood where I do see both the gentrification and the homeless issue increasing in tandem together.”

Two recent projects have dealt specifically with gentrification while also bringing in the community to interact with the commentary. “Build a Wall” was an installation that was made in collaboration with the poet Toluwanimi Obiwole. It was installed in RedLine and invited viewers to respond to a series of questions written by Obiwole. These questions asked things like: “Is your neighborhood still intact?” and “What is gentrification?” 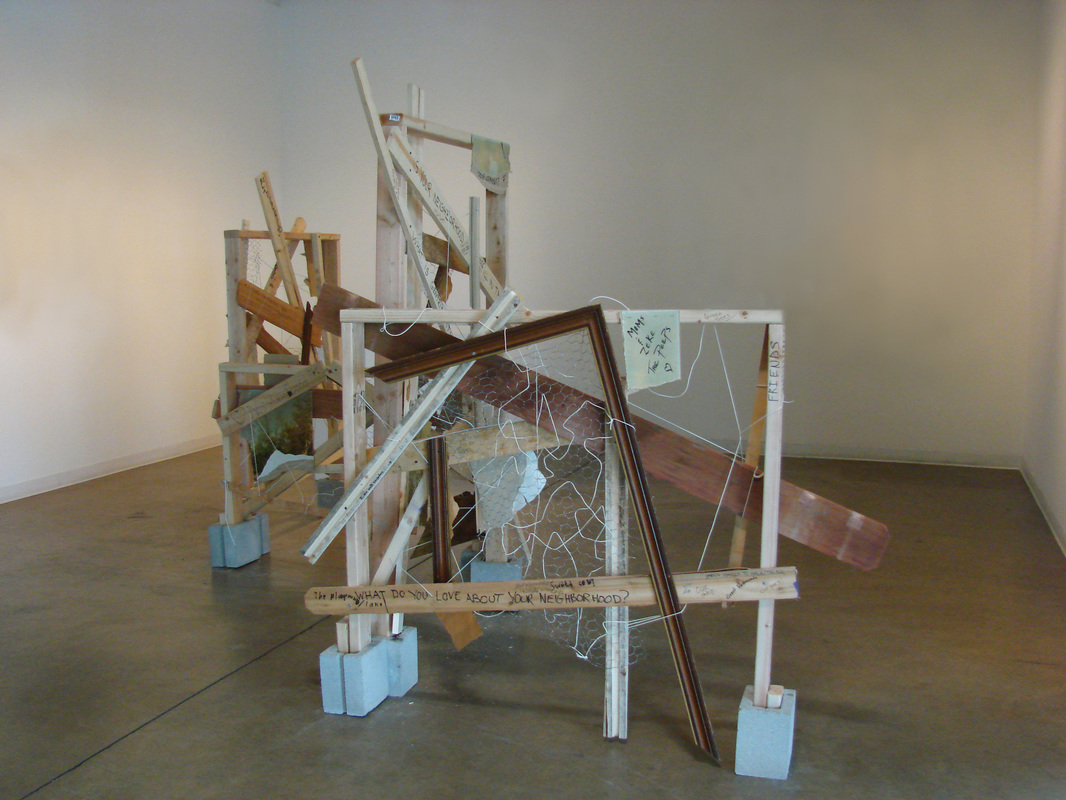 “There was a lot of participation and I think people really enjoyed it,” Rockett said. “It was a little bit more private even though it was in a public setting, where they could take a moment to themselves to be able to respond to some of the questions on there without having to really speak it out in public and stay a little bit more anonymous.”

That anonymity yielded responses from both the community the “Wall” was hoping to speak to newer residents. In one image of the installation is the juxtaposition of someone feeling guilty for the effects of gentrification and the acknowledgment from someone else that despite the “improvements,” they still live in a food desert.

Installations such as this are becoming more ingrained in Rockett’s repertoire as she explores the complex relationships between line and form, and social activism and engagement. Another major project dealing with these is the “Nkisi Project,” which opened at the 965 Gallery on June 3. The collaborative project’s theme is gentrification and each of the 67 artists involved approached the issue differently.

Rockett continued the aesthetic of “Build a Wall” and the 2014 Nkisi installation. They built a wooden scaffolding structure that includes trash and scrap materials that other artists collected from building sites. The “Nkisi Project” is on display until July 2, but unfortunately “It Better Be Made of Gold” closed on June 18 due to Ice Cube Gallery’s lease expiring on June 30.

To see more of Rockett’s work, visit her website. 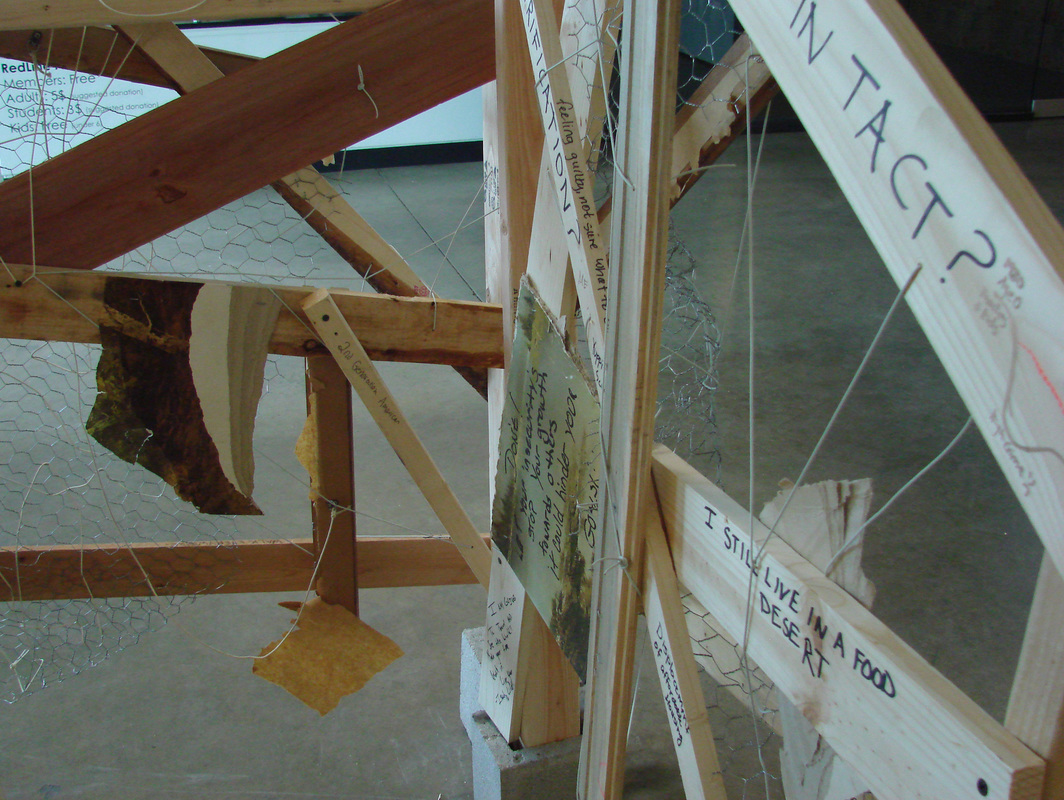