Gentrification Through the Eyes of Artists – Anthony Garcia Sr.

This is an ongoing series about gentrification and art in Denver. We will highlight five local artists and their unique perspectives on the phenomenon by showcasing their work, as well as their thoughts on how gentrification has changed the neighborhoods they call home. To see the full introduction, visit Volume 1, Volume 2 and Volume 3. 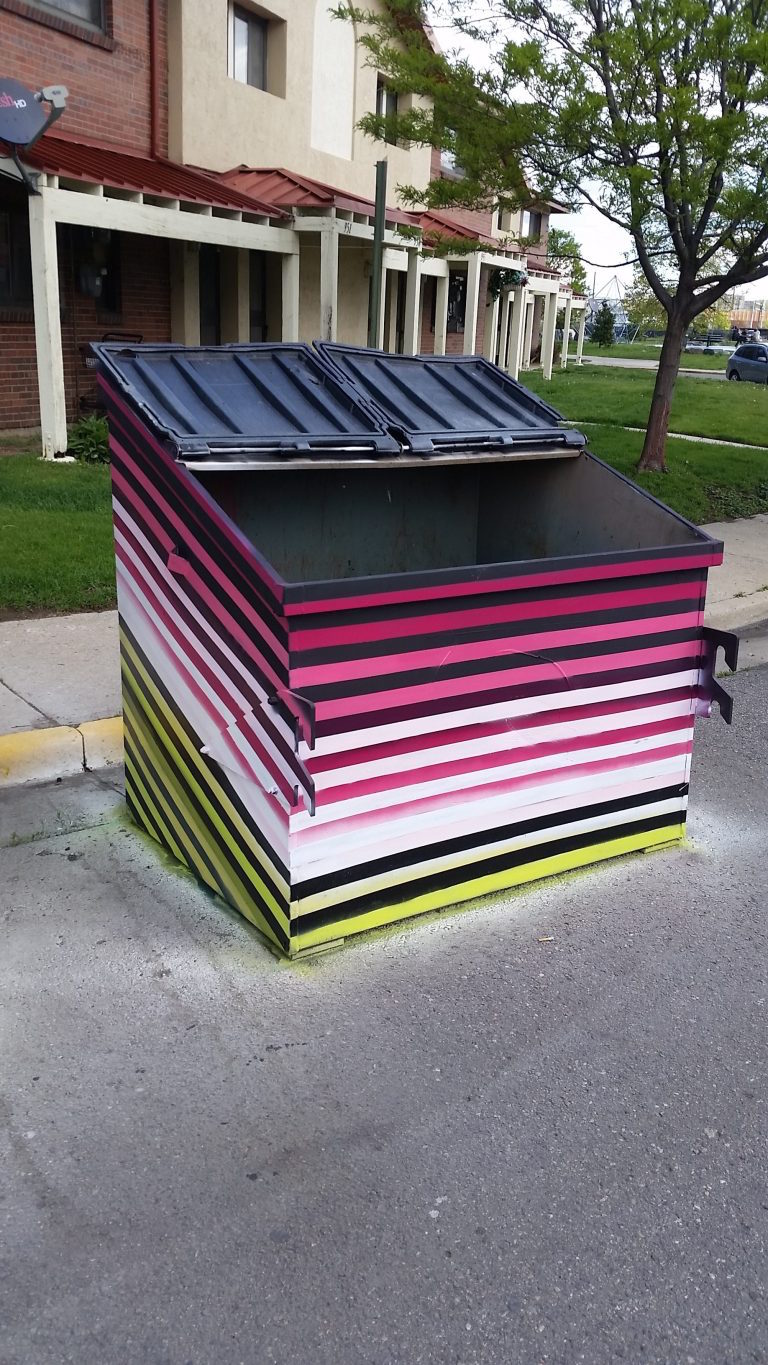 Anthony Garcia Sr. is a Denver native who grew up in Globeville. “The way I got into the art scene was I did graffiti because that’s just what kids from the ‘hood do – that’s the only art that they’re exposed to,” he said. That was over 10 years ago, and since then he’s been transitioning to canvas painting and commissioned street murals. He co-founded the BirdSeed Collective six years ago as a way to build an artist community from all media and backgrounds.

“Our big picture goal is to be an all-around community where we can help artists find places to put their work, get them jobs, even make it a place where they can come and get food, or if they need help getting health insurance or something,” he said.

BirdSeed has been actively engaged with communities since its inception, building relationships among the artists, residents and other non-profits and neighborhood organizations.

“We want to have this huge umbrella that covers it all,” Garcia said. “We have the magazine [1of1 Mag], we have the art gallery [Alto Gallery], we’re doing so much stuff with the city as far as the public art goes, we do the food programs and community groups.”

The public art has been a staple for Garcia and the BirdSeed Collective, and the recent “Sun Valley Dumpster Beautification Community Art Project” is one that spotlights the complex relationship between art and gentrification.

The project was funded by the Denver Arts and Venues’ “P.S. You Are Here” grant that was initiated in 2014 as a “citywide creative placemaking and neighborhood revitalization program” meant to create short-term physical improvement to public spaces to inspire long-term change.

Now, Sun Valley isn’t experiencing a high level of gentrification… yet. As a neighborhood, it’s considered to be forgotten in terms of development and infrastructure. Of the 1,500 people living in the area, 85 percent are living below the poverty line and have a median household income of $9,874.

But neighborhood organizations and the Denver Housing Authority have recently begun development projects to improve the area, including the DHA’s plan to turn the 33-acre public housing site into a mixed-income community. The neighborhood has already seen a few changes along the W light rail line since the tracks run right through the middle, but just how much change will take place and what its impact on the existing community will be remains to be seen.

That’s the reason the BirdSeed’s dumpster project is so intriguing. The idea of placemaking tends to be difficult when you’re dealing with the combination of low incomes and a diverse population of minorities, immigrants and refugees. Diasporic histories collide as multiple groups try to inhabit the same space while also struggling through economic uncertainty. Those obstacles were not ignored by Garcia when he proposed the project.

“You could just tell that those neighborhoods have it tough and you have to take that into consideration when you’re going in there and painting their stuff,” he said. “I’m from the ‘hood, too, so it’s easier for me to go and talk to them about it.” 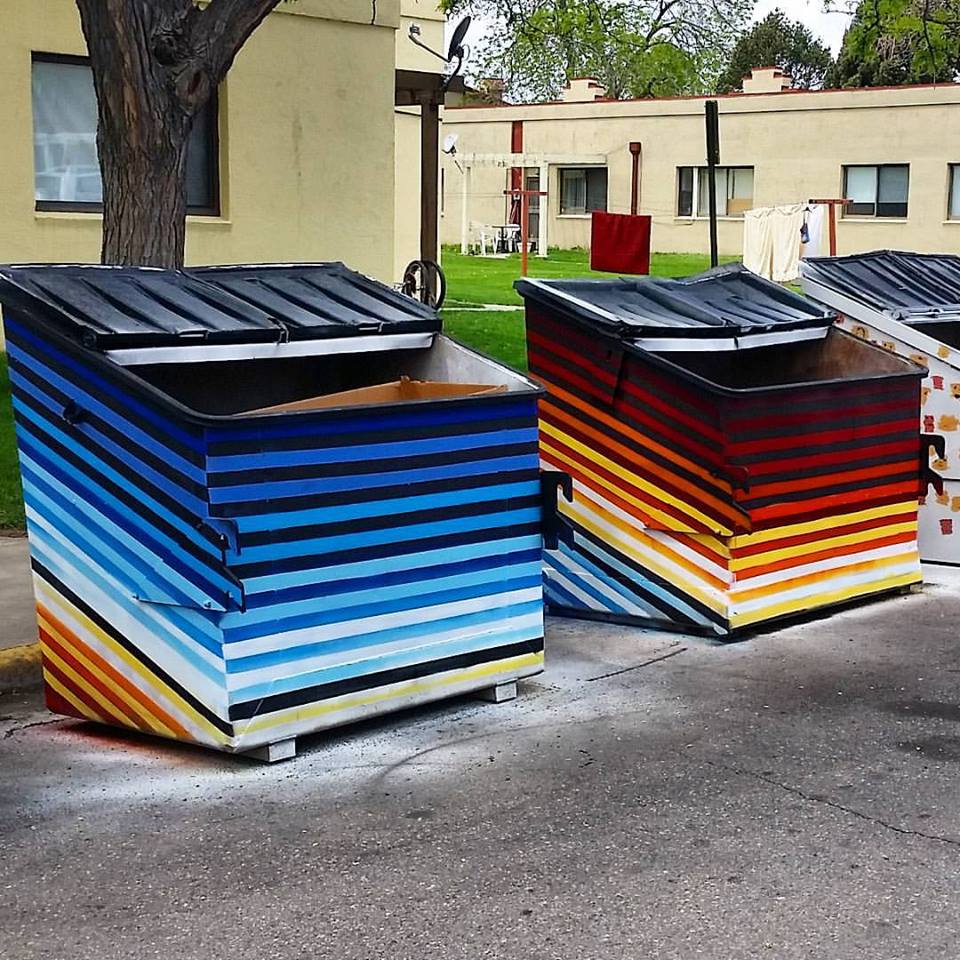 His involvement with the community started early with multiple meetings with stakeholders and the neighborhood organizations. After receiving the grant, the Collective went into the public housing site and painted 53 of the dumpsters that are right on the street and clearly visible. Multiple artists brought their skills and put murals on the dumpsters, including Detour, Javon the Unique, Tom Bond, Sheridan Furrer and Thomas Scharfenberg.

Because Garcia believes in also improving business practices for artists, he required everyone involved to individually fill out the application for the grant. He also got kids from the community to fill out the design template and present it for approval, and they got a dumpster to paint on their own.

“We had overall a really good response,” he said. “Even if they don’t love it, they don’t disrespect it.”

He’s planning on expanding the project to include other public housing sites, such as Quigg Newton near 46th and Pecos, and the Columbine Homes near Alameda and Zuni. “I just feel like those neighborhoods always get looked over – nobody really cares what happens until it’s time for someone to do something over there,” he said.

You can also find public works by Garcia throughout Denver in areas that are experiencing gentrification or about to. Two projects are a block away from each other in Jefferson Park. A sculptural bench that was made in collaboration with Thomas Scharfenberg sits on the corner of 25th and Federal, and a large mural is painted on the intersection of 25th and Eliot. There are multiple murals in his original ‘hood in Globeville, including a recent wall mural near the corner of I-70 and Washington. 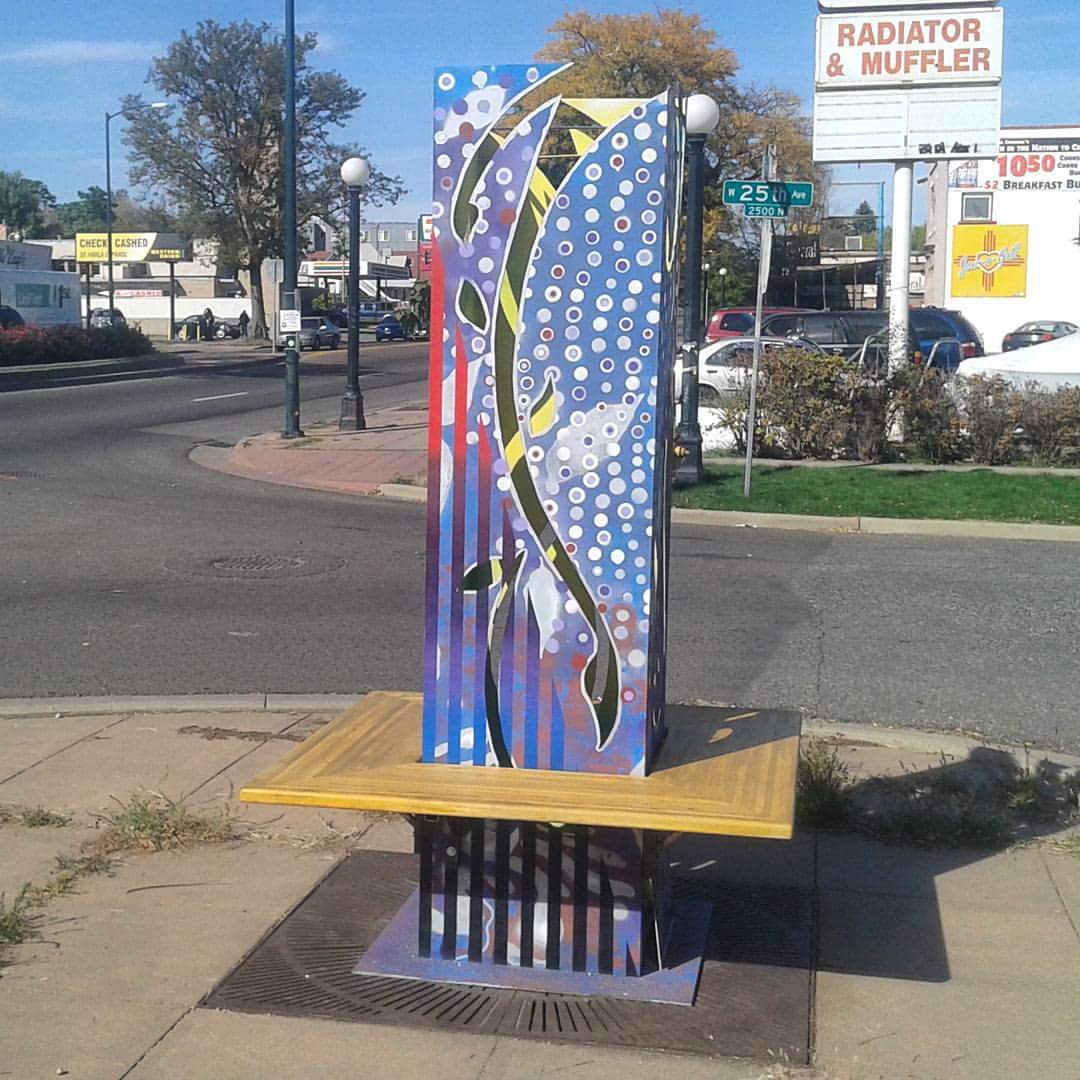 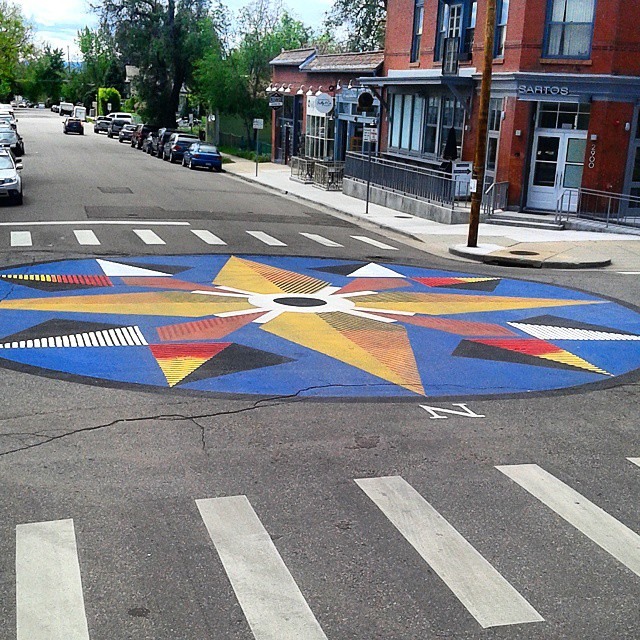 Once you see one of Garcia’s geometric paintings, you see them everywhere and you’ll continue to see them as the city continues developing. In accordance with 1988’s Executive Order No. 92, any public capital improvement project that costs more than $1 million has 1 percent of its construction budget directed to a public art project. Garcia has already applied for a major project on 6th and Federal, and will hopefully be able to start within the next year.

These grants may add to the contention between art and gentrification – beautifying in order to encourage private investment, but it’s difficult to gauge whether the relationship is the same when artists don’t have studios in the area. There is still the possibility that the work done with the dumpster project will energize the community and encourage the residents to continue the improvements. However, there is also the possibility that when the DHA begins their mixed-income project, those living in the housing now will be displaced much like the residents in La Alma/Lincoln Park.

For more on the BirdSeed Collective, visit their Facebook page. You can also visit Alto Gallery at 4345 W 41st Ave.