First Bite: Stoic and Genuine to Open in Union Station

What: Stoic and Genuine, the new fish house from award-winning team, Jennifer Jasinski and Beth Gruitch

Pros: The sparklingly fresh seafood is served with a light touch, keeping flavors clean and delicious. New England classics like the lobster roll and fried clams are even better than most I’ve had in Cape Cod. The indulgent Billi Bi soup is a can’t-miss, a meal in itself. The unique granita program features a vibrant chile-citrus granita that tops the house oyster, or a strawberry granita to be topped with one of the many grower champagnes.

Cons: Stoic and Genuine is only 2000 sq. ft., so getting a table may be challenging. Luckily, reservations will be accepted and there will be patios overlooking the Union Station fountains for additional seating in the warmer months.

When Crafted Concepts, a.k.a James Beard award-winning chef Jennifer Jasinski and her partner Beth Gruitch, announced that they would be adding a fourth restaurant to their roster, it was bound to be one of the summer’s most anticipated openings. The pair defined Denver dining on Larimer with the likes of Rioja, Bistro Vendôme and Euclid Hall. The team’s newest endeavor, a fish house named Stoic and Genuine, will be located in another Denver landmark: the historic Union Station. 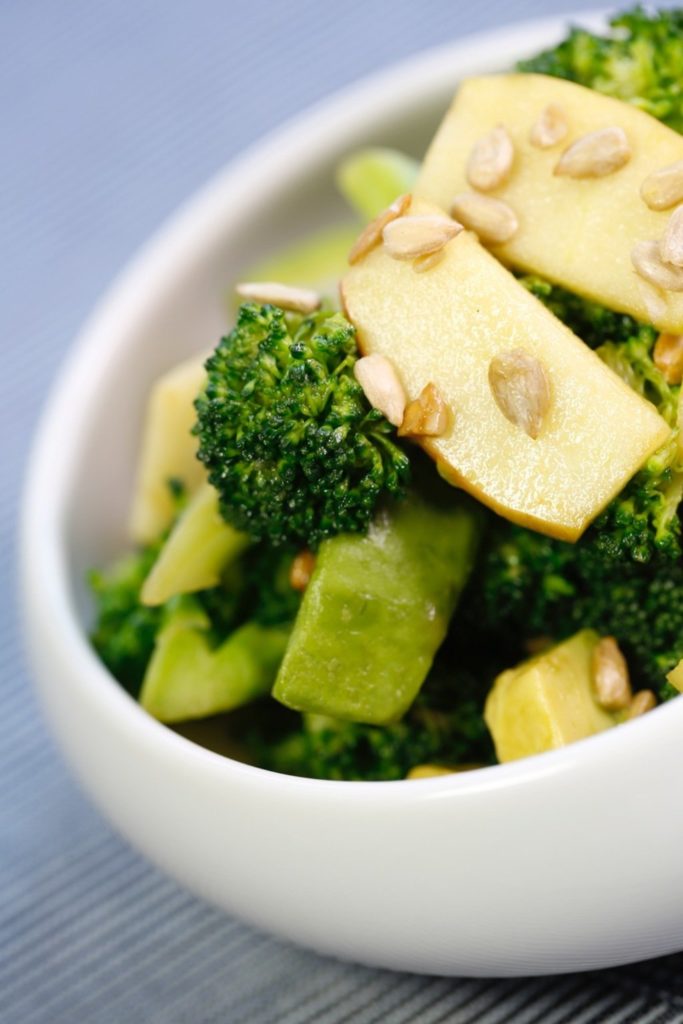 While construction isn’t quite finished yet, I got a sneak peak of the design at a recent preview lunch held at Rioja. Though Crafted Concepts was originally planning on calling it S&G Fish, the name has been solidified as Stoic and Genuine (perhaps they shied away from S&G so as not to be confused with Frank Bonnano’s newest venture, Salt and Grinder?) It will be located directly below The Crawford Hotel, neighbor to the likes of Alex Seidel’s Mercantile and The Kitchen Next Door. The space seats 62 indoors and 40 on a pair of patios that will look out to Union Station’s new plaza fountain. The ambiance is nautical and coastal themed, with a palette of muted grays, octopus murals, and a stunning raw bar.

Jorel Pierce, currently the mustachioed chef de cuisine at Euclid Hall, will be helming the kitchen (his mother even sewed all of the napkins for S&G.). The seafood-centric menu that he and Jasinski have developed includes a inspired mix of New England classics and sophisticated, market-driven dishes featuring clean, straightforward flavors. “We wanted to be the place where chefs would go to eat seafood,” says Pierce of the menu. “As chefs, we’re making what we want to eat.” And I can tell you that this is most definitely a good thing. Though response to the restaurant’s name has been mixed, the food speaks for itself.

“As chefs, we’re making what we want to eat.”

To start, do not miss the oysters. Pierce has been cultivating relationships with oyster farmers on both coasts to the point where the oysters at S&G are grown to his exact specifications of size and brine content, a branding of bivalves, if you will. The house oyster is not served with the usual mignonette, but with a chile-citrus granita, an icy hit of acid and heat that makes me wonder why oysters are ever served any other way. A granita is basically an Italian flavored ice, similar in some ways to a sorbet but with a courser texture. This granita is part of the ambitious granita program, which features a selection of both savory and sweet (think tarragon-cucumber, lychee-sake) to be either spooned onto fresh oysters, or topped with champagne, respectively. 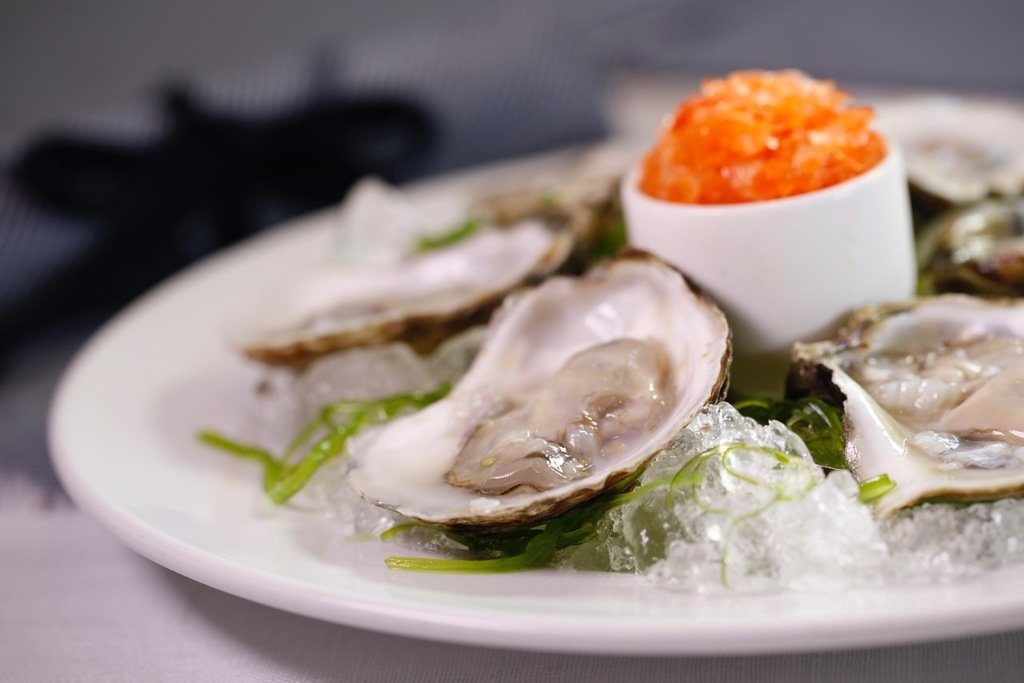 “I worked at a Wolfgang Puck restaurant, Granita, in Malibu, and I’ve always loved the idea of offering them at a restaurant. We want people to feel free to use them however they want,” Jasinski said. The granitas will be central to the beverage program, as well as house-made sodas, and an extensive offering of grower champagnes that comprise the core of the wine list. 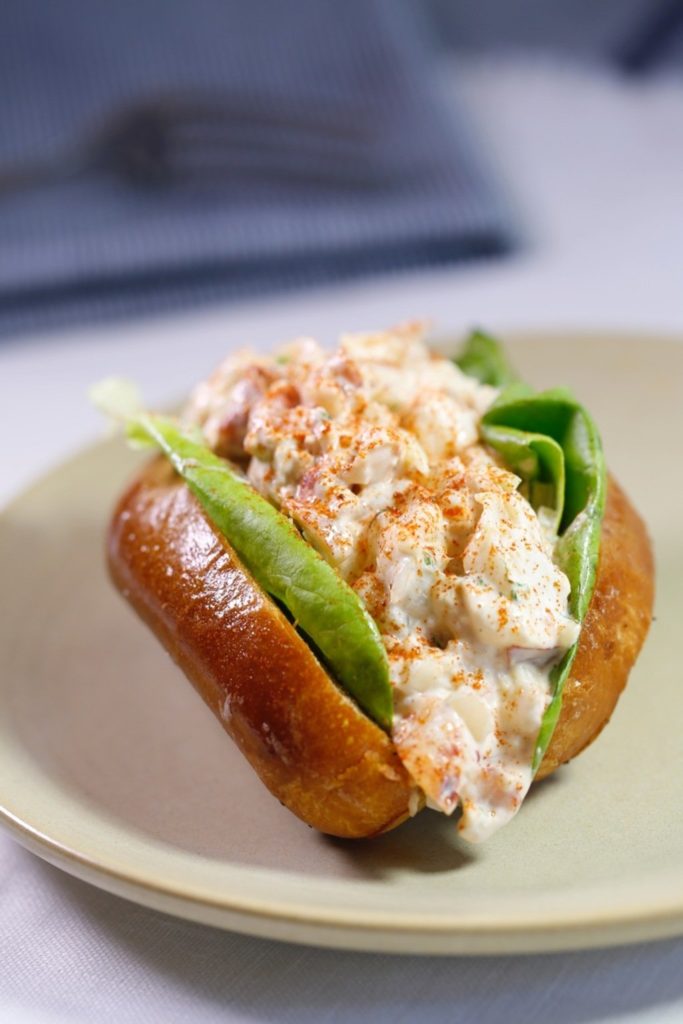 Any one of those bright, estate bubblies would pair well with another menu standout, the soup Billi Bi, a classic French pureed soup consisting of just of mussels, mirepoix, white wine, and fish stock. The result is one of the most transcendentally rich, luxurious things I’ve eaten all year: the sweet Bang’s Island mussels give the broth a heady, aromatic depth of flavor that is bowl-licking delicious. Topped with grilled ciabatta slathered in aioli, I could eat this every day.

As for the New England classics, Stoic didn’t disappoint. The lobster roll was executed perfectly, with large chunks of Maine lobster lightly dressed and piled on a buttered brioche that was out of this world. The table collectively agreed that we could probably polish off a bucket of the fried clams, which will be served with a choice of classic cocktail sauce and lemon, or as Jasinski prefers, house aioli.

Even the salads were delicious. The house salad comes with a dehydrated seaweed topping that provides addictive crunch and umami. A broccoli salad, featuring crisp-tender florets, avocado, apple, and a ponzu-sesame vinaigrette, was expertly balanced.
Though not everything was perfect—the green goddess dressing on the crab louie was a bit salty, and the vichyssoise Bavarian overwhelmed the Black River caviar it was served with. That being said, my complaints were few—the menu overall is fresh, inspired and well-executed.
Luckily the food at Stoic and Genuine lives up to its slogan: “No ocean. No worries.” Though Denver isn’t exactly famous for its fish houses, S & G definitely has the potential to change that, one oyster at a time. With the seafood being flown in fresh daily, much of it is arriving quicker and fresher than it would to restaurants in New York City, and Denverites will surely flock here for a taste of the sea. Stoic and Genuine is slated to open around July 8, and with food this good, it should be an iconic addition to Crafted Concepts’ mini empire.

All photographs courtesy of Marc Piscotty.