The soft mechanical clicks of a timing board welcome you as you walk into the ticket station, bathed in the glow of vibrant rainbow lights above. After taking a few steps to the ticket window, you can purchase your ticket to Meow Wolf’s Convergence Station, a multi-sensory quantum journey through universes that twist classic nostalgia into something otherworldly, bizarre and entrancing.

Four years in the making, Convergence Station is the third permanent installment from creative supergroup Meow Wolf — and it’s located right here in the Mile High. The artist collective began more than a decade ago in Santa Fe, where it grew from an after-work passion project into the first multi-sensory experiential exhibit of its kind — known affectionately as the House of Eternal Return. Meow Wolf’s highly-anticipated second installment, Omega Mart, opened earlier this year and quickly became one of the hottest tourist destinations in Las Vegas. Now, the most ambitious project from Meow Wolf to date, Convergence Station will open its doors to quantum travelers this weekend. 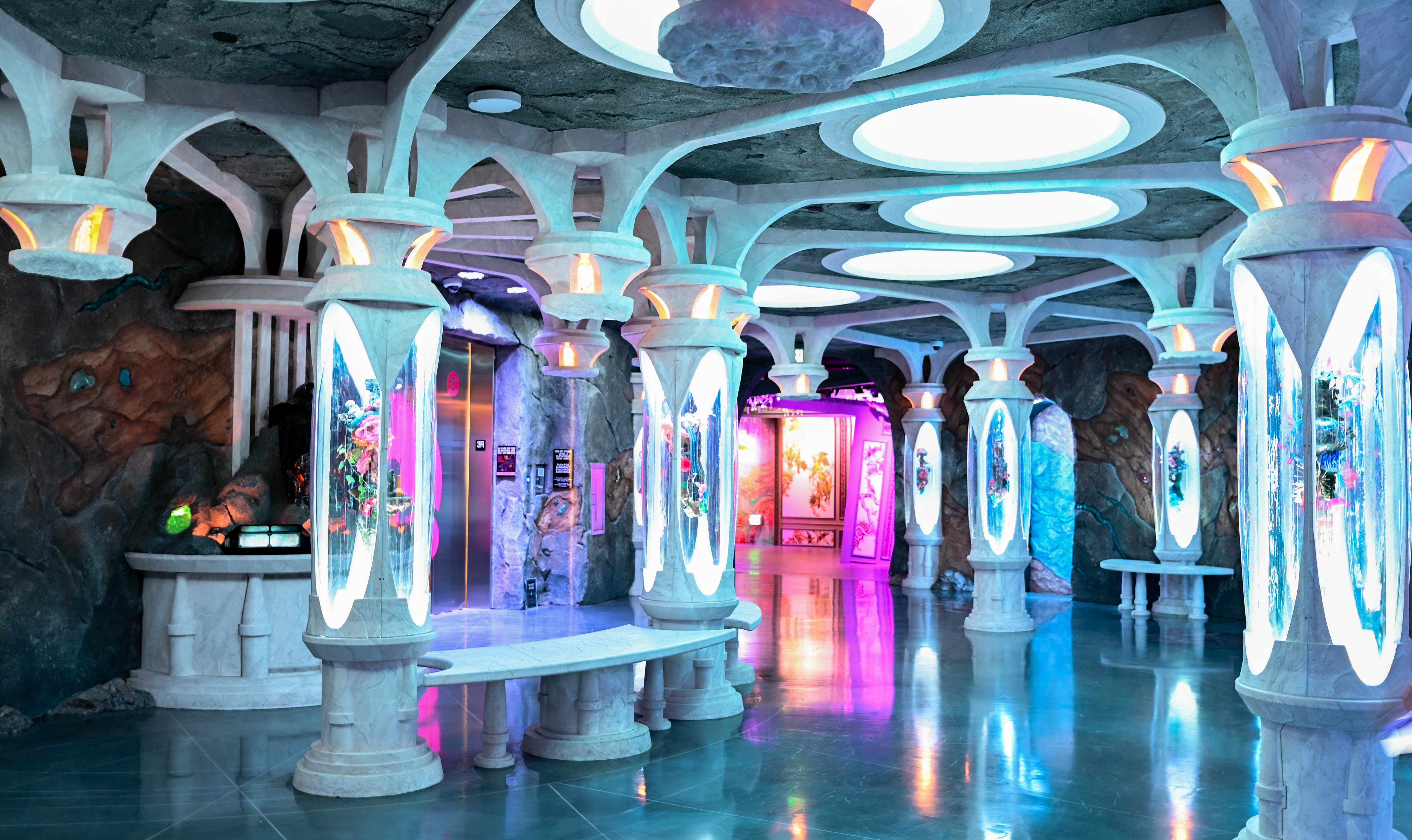 Tucked away between the swirling on and off-ramps of I-25 and the sweeping curve of Colfax, Convergence Station is located quite literally at the convergence of some of Denver’s busiest highways. Located right next to the old Ironworks, the imposing white structure that contains four floors of multi-sensory experience is hard to miss. But while the plain white exterior of the building may appear quite boring on your daily commute home from work, the closer you get, the more Convergence Station draws you in.

Barely visible from the highways but hard to miss as you walk up, Convergence Station’s walls are adorned with a mural that gives a glimpse of what to expect inside. Painted by a group of artists, the mural stemmed from the idea of having multiple train platforms intercepting with one another. As the mural curves around to the front of the building, the strictly laid out geometric lines blend and morph into more organic shapes. 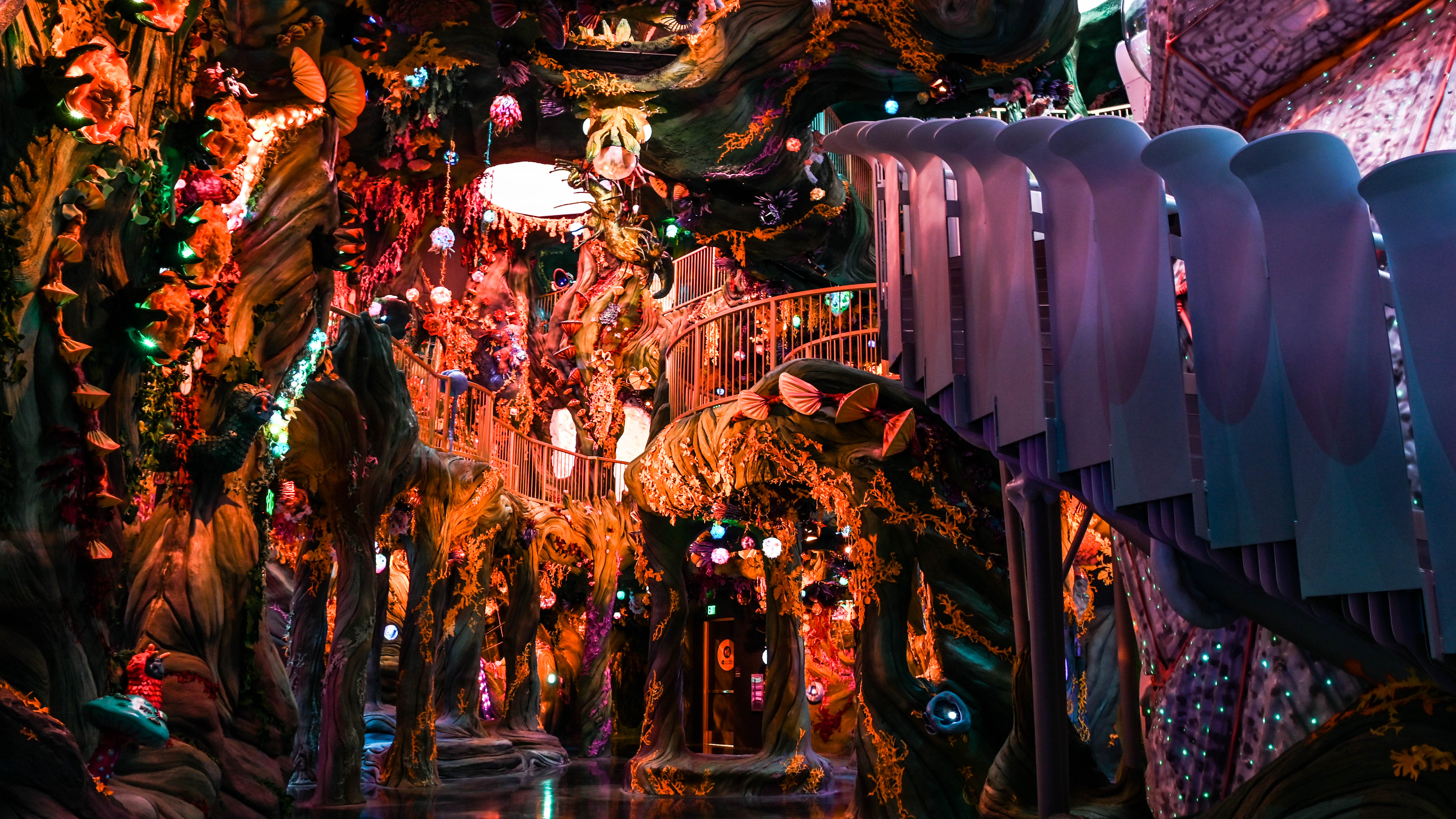 A serpentine creature curls itself in and out of the pavement, greeting you as you walk through the parking lot. Moving through the front doors, Convergence Station appears just like any other transportation hub — ticket windows run by the Quantum Department of Transportation (QDOT) invite you to pay your fare and begin your exploration of the multiverses deeper inside.

“As you enter Convergence Station, there’s really no wrong path as you play and explore. You are your own guide on this journey. As you go through, if you look closely, you’ll notice that just under the surface of Convergence Station there lies a cosmic mystery — a mystery of four forgotten women and a gateway to the infinite,” said Story Development Director James Longmire.

The four worlds accessible at Convergence Station mix and melt into each other, much like the mural adorning the building. Following an unexplained cosmic event, each of the worlds was pulled out of their home universe and merged together into something new entirely. As a consequence, the residents of the worlds lost their memories — and four women disappeared without a trace. After buying your ticket from QDOT, you can enter this new universe and dig into the mystery yourself. 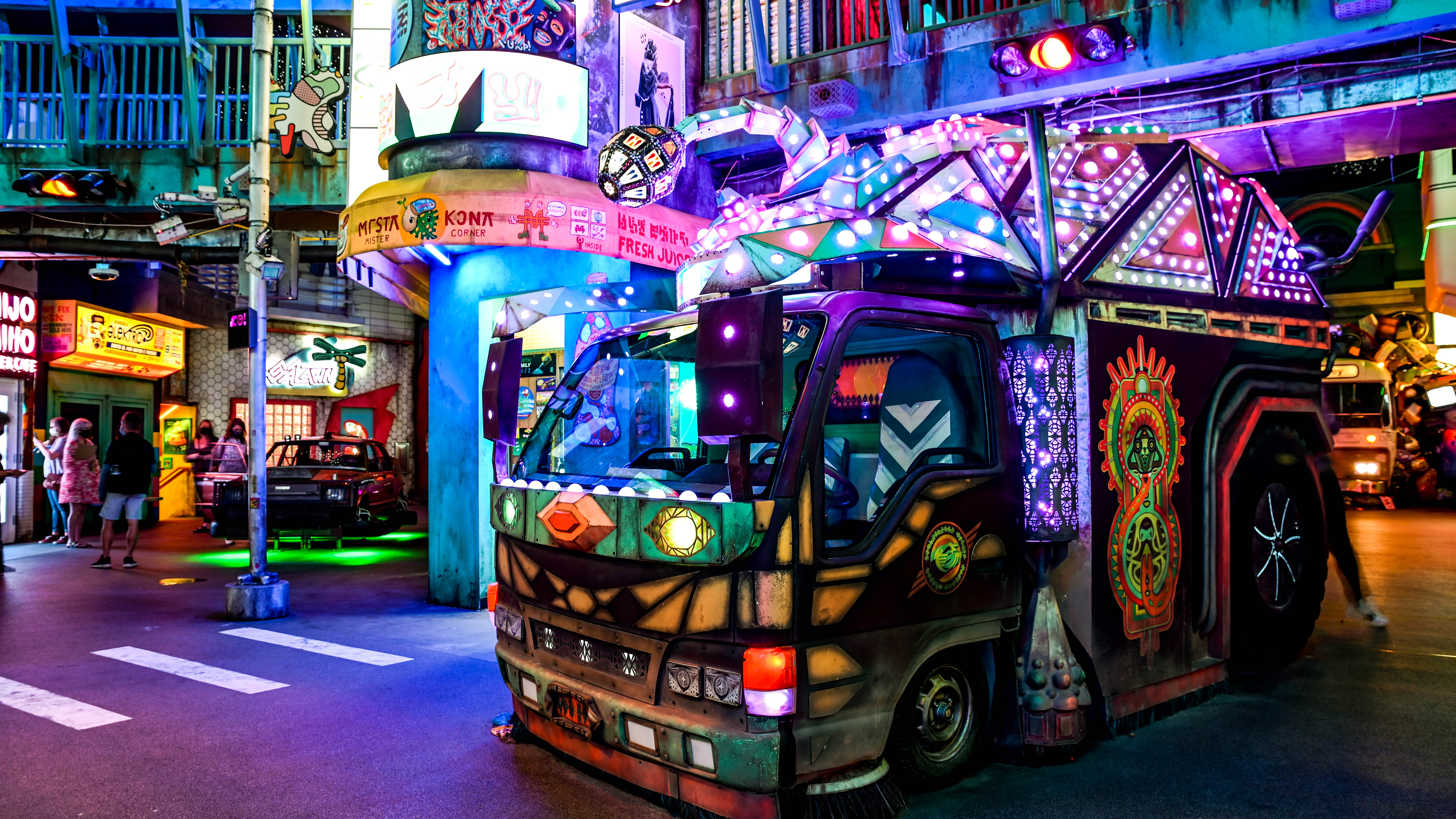 As you move through the exhibits, clues to the history of the universe are everywhere. Most notably, memories — which also serve as the primary currency for the residents of Convergence Station — are stored in a unique crystalline material called Oss. This can be seen most clearly in Ossuary, more specifically in Lyra’s Keep, a room where many important memories are kept.

As you view the memories contained within Lyra’s Keep, if you stand in the right space you may hear audio that aligns with the memory you’re viewing. While it gives plenty of insight, Ossuary is far from the only notable stop on your tour through the multiverse hidden inside Convergence Station. The Rainbow Room transports you to a tea party with imaginary friends. In Pizza Pals Playzone you’ll find yourself immersed in the world of a Chuck-E-Cheese-esque pizza parlor where all of the children and employees have been trapped after closing hours. 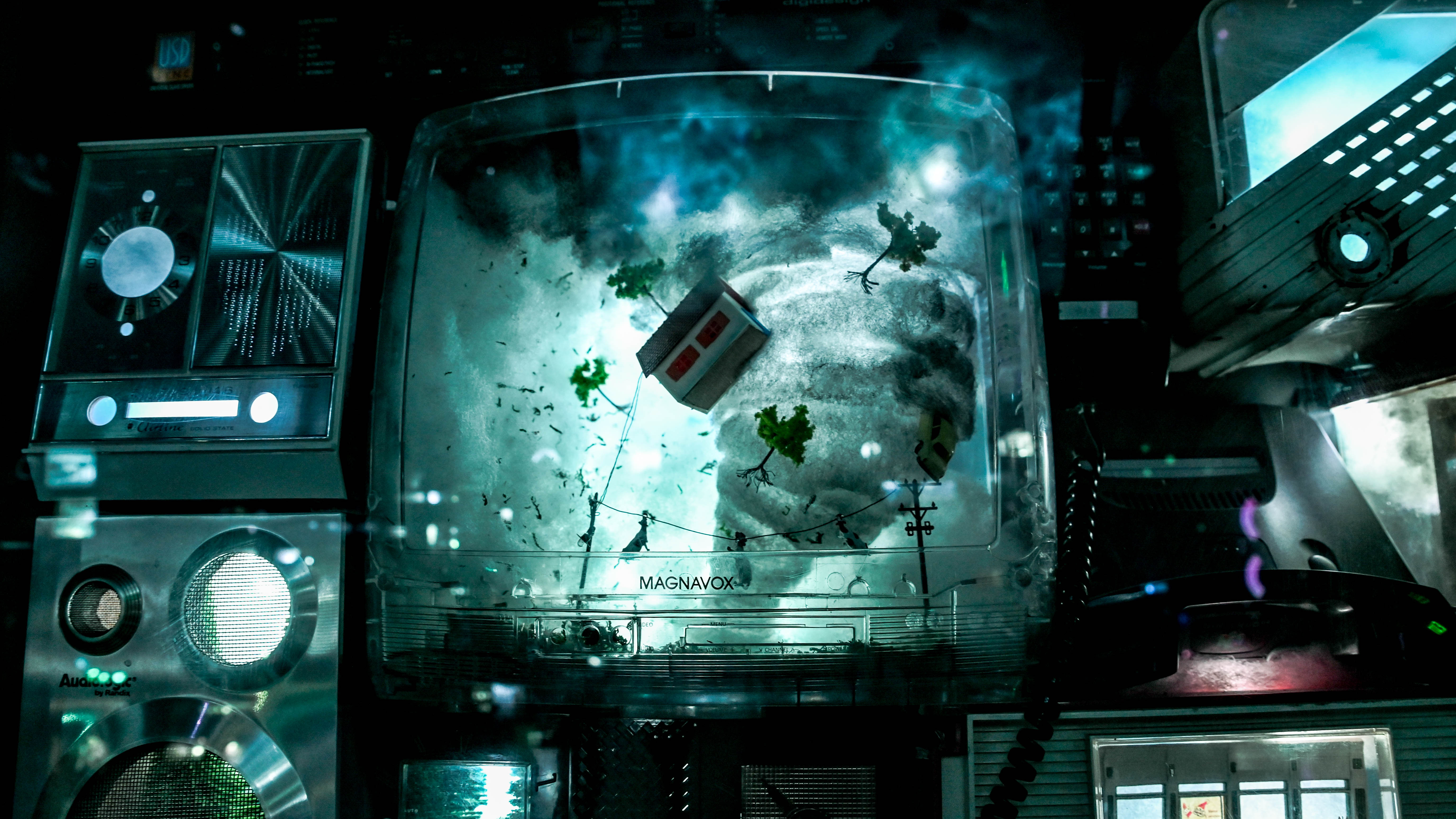 Meanwhile, in the Rat’s Nest, ’90s nostalgia is twisted into a dystopian future where mutated rats keep company with a rude soda machine that may or may not give you what you paid for. In a more serene world, Post Apocalyptic Paradice paints a picture of life without humans at all.

There are also tributes to Denver specifically — something that was done intentionally by Meow Wolf. At the outset of the project, the artist group hosted several community listening sessions to hear what locals wanted to see in the newest permanent installation. The answer was clear: locals want to see more of Denver. Satisfying all of those desires, Meow Wolf brought in more than 100 local artists to collaborate on Convergence Station.

Throughout the exhibit, if you keep your eyes open, you’ll find homages to old Denver high and low. However, Meow Wolf took things a step further to ensure that Denver was a star in the exhibit with the installation of an old city bus — so old that it doesn’t comply with ADA standards. A nod to the accessibility movement rooted right here in the Mile High, the city bus located within the exhibit includes a special tribute to the Denver Gang of 19. As you exit the bus, you’re transported to Gremlin Symphony, a world of sentient musical instruments that talk to each other, creating a symphony. 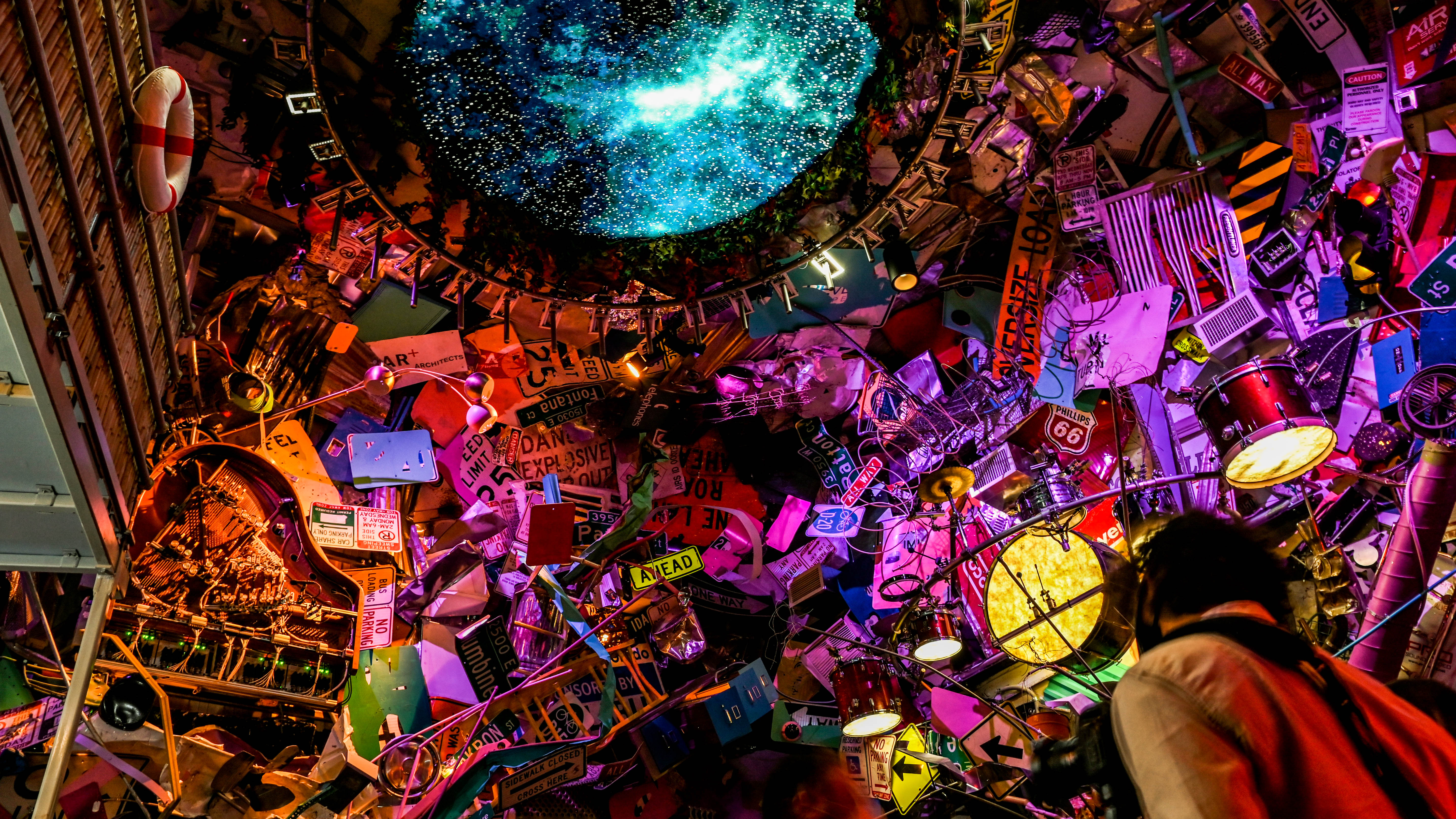 As you move throughout the multiverse, there’s a lot to take in. Fortunately, quantum visitors and residents of Convergence Station are happy to answer questions and tell you about their world. For those who may feel overwhelmed by it all, there are plenty of alcoves and hidden rooms to step into and escape the quantum travel for a sensory cleansing. Rooms bathed in soft light and warm melodies provide moments of respite from the bustle of Convergence Station.

To delve deeper into the experience, you can utilize a Qcard — a unique RFID-enabled card that helps you solve the mystery of how these four worlds converged. Obtainable at the in-exhibit Convergence Exchange, Qcards can be used throughout the worlds to unlock short animations that give you deeper insight into Convergence Station’s story. As you get closer to finding answers about the history of Convergence Station, you’ll access longer animations that paint a clearer picture. “If you dive deep enough, you’ll discover how you are a part of the story,” teased Longmire. 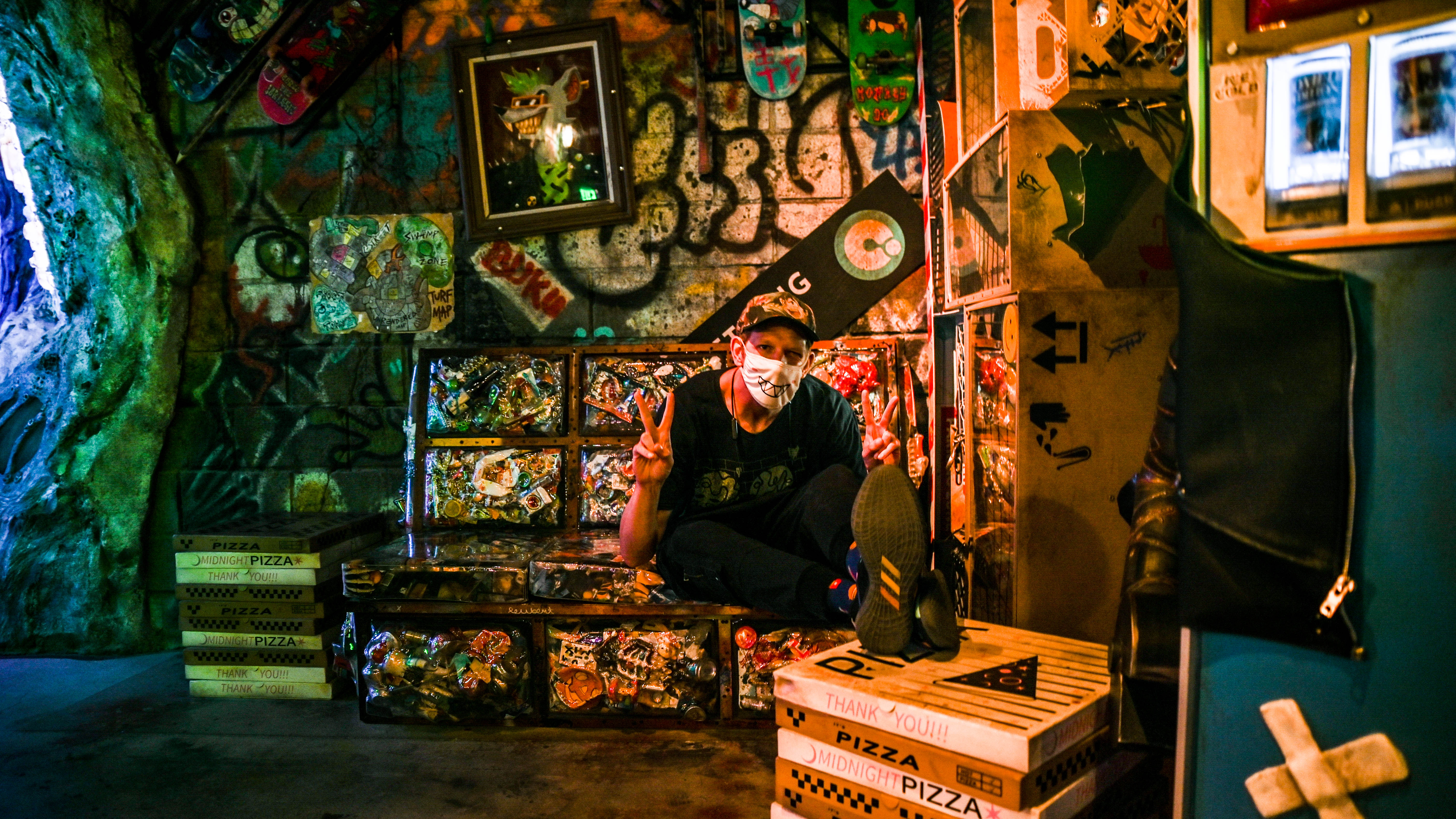 A Meow Wolf artist sits inside The Rat’s Nest