When Dave Hadley won Season 32 of Chopped he found himself asking an important question. “I win 10 G’s and I’m like alright what do I do with it?” The answer naturally was to fly to Thailand to work at Gaggan — Gaggan Anand’s former mecca of Indian fine dining, a two Michelin-starred winner of Best in Asia three years running and a previous seat-holder in The World’s 50 Best’s top five. “I needed to be there,” said Hadley.

This was in 2017, when success and international travel were still amicable bedfellows. Hadley has been back in Denver for a couple of years, though it wasn’t until this last summer that he debuted his first solo project Samosa Shop. The operation is nomadic, serving fresh and frozen samosas at a series of pop-ups. Curries often make the cut, with rotating flavors joining a few tried and true staples. “I want to find a way to make Indian food sexy again,” grinned Hadley.

Hadley grew up in Jersey City, jumpstarting his culinary career by attending The Culinary Institute of America. Since moving to Colorado, he’s put in work at some of the city’s best-loved kitchens — with a spell at Acorn, a stage at Cholon, working a stint at The Preservery and spending some time at Biju’s Little Curry Shop. He’s also involved in cannabis. Early on, he helped launch Craft Concentrates’ edible line. He’s since moved into independent consulting, sometimes working with Burt’s Bees as a flavorist, introducing cannabis-derived terpenes. “I’m trying to teach people the normalization of cannabis,” said Hadley.

The young chef got connected with Food Network through Biju Thomas, the titular restaurant having attracted Guy Fieri’s seal of approval on an episode of Diners, Drive-Ins and Dives. Hadley seems built for television, with plenty of charisma helping to broadcast a culinary style that also speaks for itself. He’s taught at Stir Cooking School, an experience he says helped bolster his confidence on-screen. Prior to the initial lockdown, he served as the culinary director for Stone Soup Collective — the group behind The Budlong Hot Chicken, Hamburger Stan, AJ’s Pit Bar-B-Q and Grabowski’s Pizzeria.

“For me, COVID was my reassessment of myself within the food scene,” said Hadley. “I first got the idea for Samosa Shop when I saw Virgil start giving out kimchi,” he continued. The concept debuted at NTMRKT and has since grown to be one of the consistent pillars of an otherwise mutating collective. While the cuisine itself may be Hadley’s most personal output to date, the project is guided by bigger principles.

“I’m doing it to bring the samosa its proper recognition,” said Hadley, noting that similar morsels including dumplings and burgers have been unfairly hogging the spotlight. “People don’t know what a samosa is supposed to taste like because there’s not any love and care in any of them,” he said, fully prepared to poke the bear. There is something confrontational about Hadley’s dishes, each bite an invitation to spar with the cultural preconceptions that sometimes surround the fare. “Society has put Indian food in a little square,” he continued. “I feel like I’ve always had a chip on my back as a young kid trying to figure it out.” Samosa Shop is a battle cry, this time the snack proving mightier than the sword. 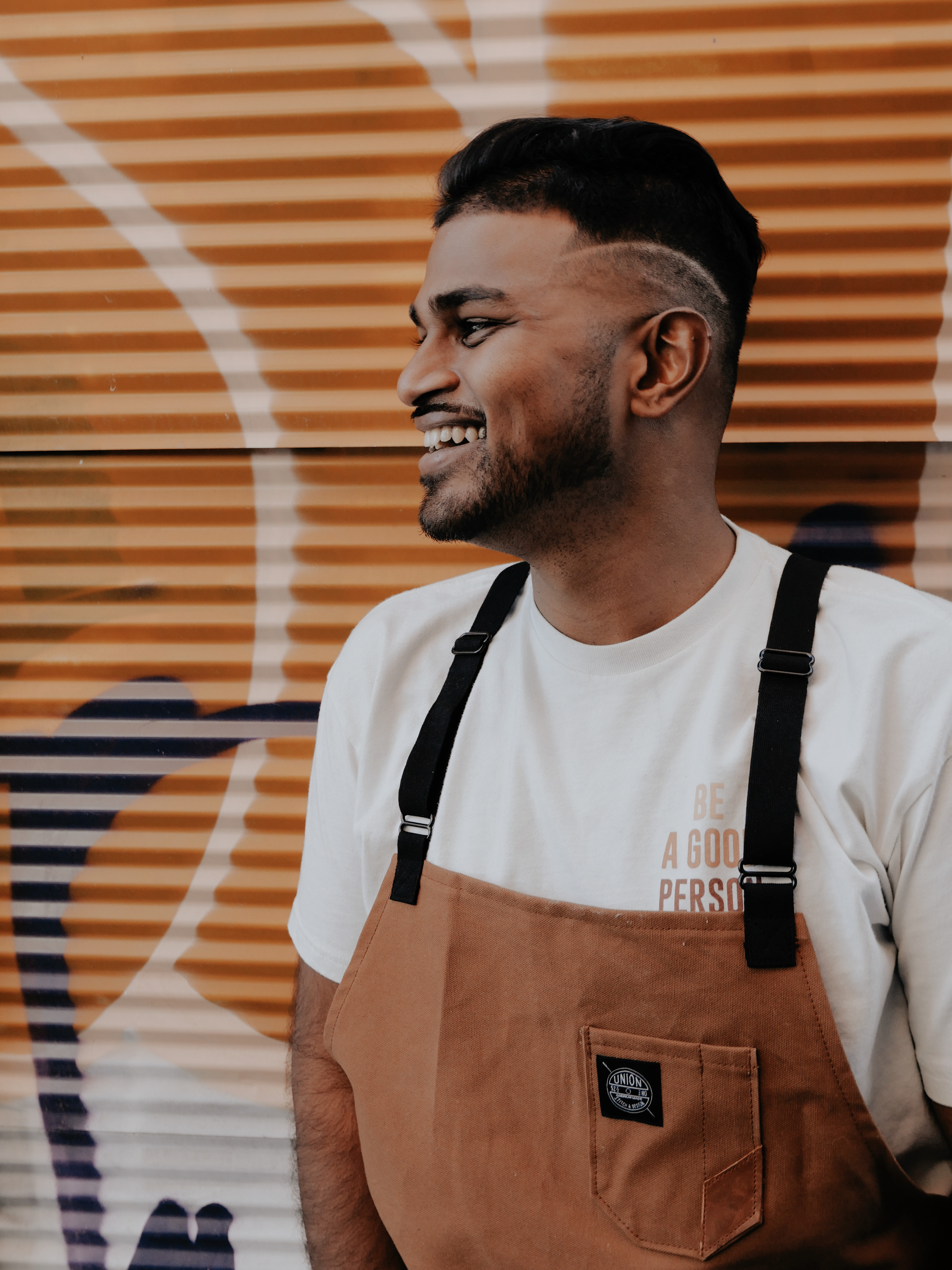 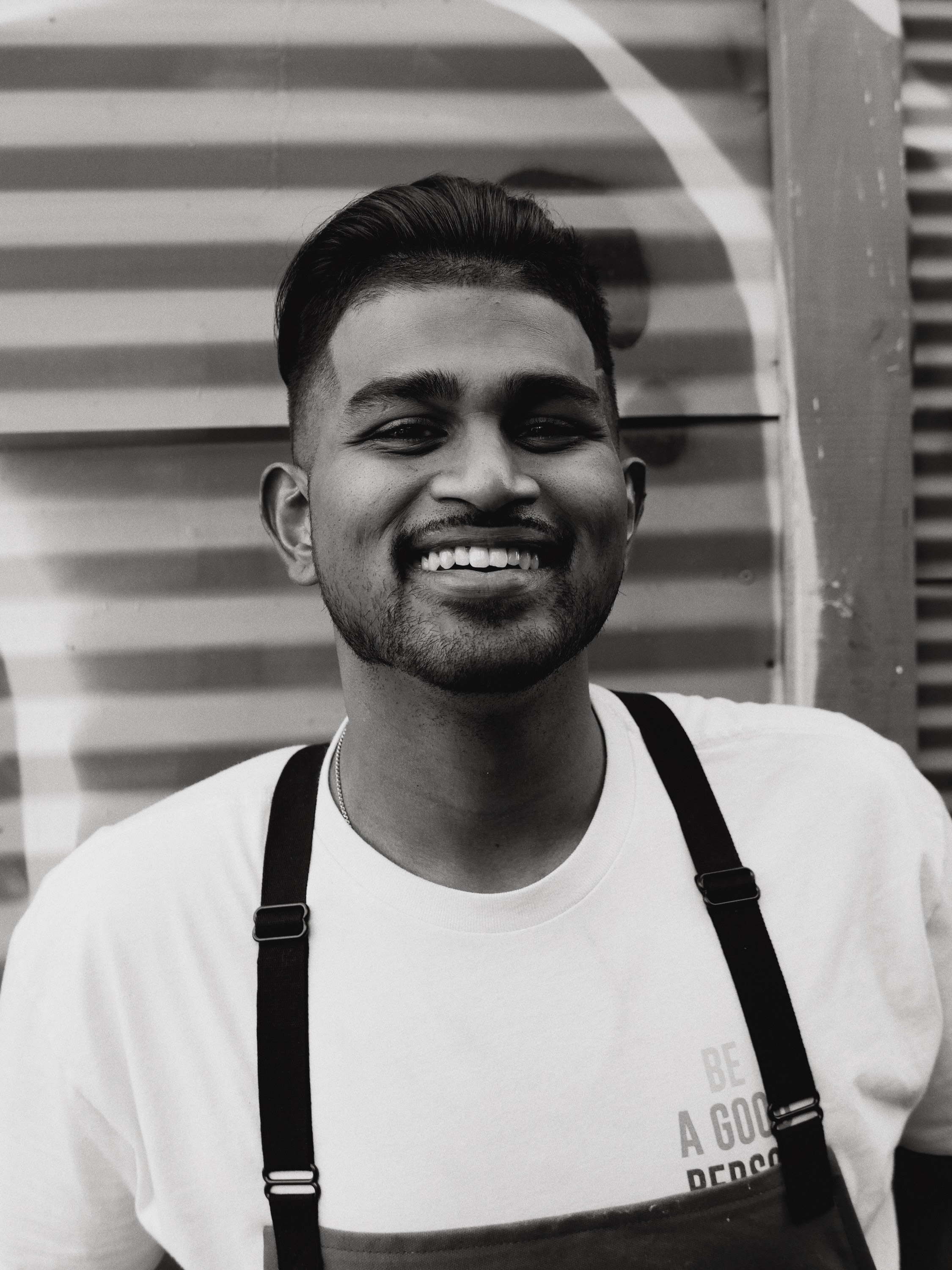 While samosas are necessarily humble in their scope, Hadley’s versions display his distinguished background. The nearly a year he spent with Anand shows. “He wanted me to do these things and connect my Indian culture with American food. I wanted to see what the limits were,” said Hadley. “He’s just like me, an Indian dude trying to fucking make it,” he continued excitedly.

At the core of Samosa Shop are the vegan and bacon and egg samosas. “The vegans are truly my baby,” said the chef. As the vegan option runs closest to tradition, the bacon and egg variety was made with kids in mind, hoping that the familiarity of the ingredients would help to downplay some of the samosa’s perceived exoticism for any tyke who might otherwise demand a Happy Meal. Special fillings have included sagg and tandoori chicken, with a Thanksgiving samosa — with turkey, sweet potato and cranberry — set to appear at next week’s pop-up at Pony Up.

To wash it all down, the house-made chai is the way — though the distinct spice blend nearly risks stealing the show. “I think everyone just needs some fucking chai in their life. This is stuff that’s made with love and made with compassion and that’s why it tastes the way it tastes,” said Hadley.

Even with the food as good as it is, Hadley is still motivated by the daily interaction the project affords. “I’m all about that hand to hand combat of food and we’ve lost that,” he said. While from a safe distance, Hadley joyously evangelizes a food he knows has no business being an underdog. The chef plans on eventually getting his frozen samosas in grocery stores across the country. “I want my family in New Jersey to be able to get the same thing,” he said. Even as the samosas take center stage, Hadley will be returning to the Food Network in the first quarter of 2021. While details are currently under wraps, the chef’s trajectory remains upward.

“I think I came back to Denver because I’m not finished here yet,” said Hadley, his eyes locked on the horizon. “If I see everybody doing something and I’m not hustling about it I’m doing something wrong,” he smiled.

Samosa Shop’s next pop-up will be at Pony Up on Monday and Tuesday, November 23 and 24 each night from 4 – 10 p.m. Preorders are available here.

Information regarding future pop-ups and the latest dishes can be found on Samosa Shop’s Instagram.

All photography by Alden Bonecutter except where noted.