Review – CRUSH Needs to Reckon With Its Abusive Past

For the last few years, the street art festival CRUSH has been edging toward a more organized, consistent and marketable event, but this year it finally matured into a new, and perhaps troubling, form. Where the last few years felt like an awkward pre-teen stage, this year felt like full-on adolescence — more self-aware but not yet capable of seeing the big picture or understanding its own role in a gentrified neighborhood.

Some might say that CRUSH has grown into the festival it deserves to be — securing high-profile artists, attracting large crowds of onlookers, bringing money to local businesses, making blank walls into monumental artworks. And while all of those aspects of the festival are wonderful for a city like Denver — that has historically shunned street art and other cultural oddities — they might not be the best thing for the community itself.

The things that make CRUSH problematic, in its current form, are more nuanced than its obvious successes. High-profile and world-renowned artists like Shepard Fairey, El Mac and Pichi & Avo are wonderful additions to Denver’s art scene, but by spending more money on those kinds of artists, the organizers of CRUSH sow the seeds of dissent among local artists who wonder why the lion’s share of money and acclaim is awarded to outsiders. The ballooning number of onlookers in the last few years proves that CRUSH has popularized street art in Denver, but it also multiplies the number of disrespectful onlookers and creates an atmosphere where the art is exploited for social media points. It isn’t uncommon for street artists in RiNo to sarcastically laugh about their role in creating Instagram backdrops anymore. Making hundreds of blank walls into works of art concentrated in one neighborhood is an admirable feat, but when some of the newest additions to the festival are the walls of brand new apartment complexes that can use the murals as marketing ploys and justification for inflated rent prices, the feat loses a lot of its sparkle. 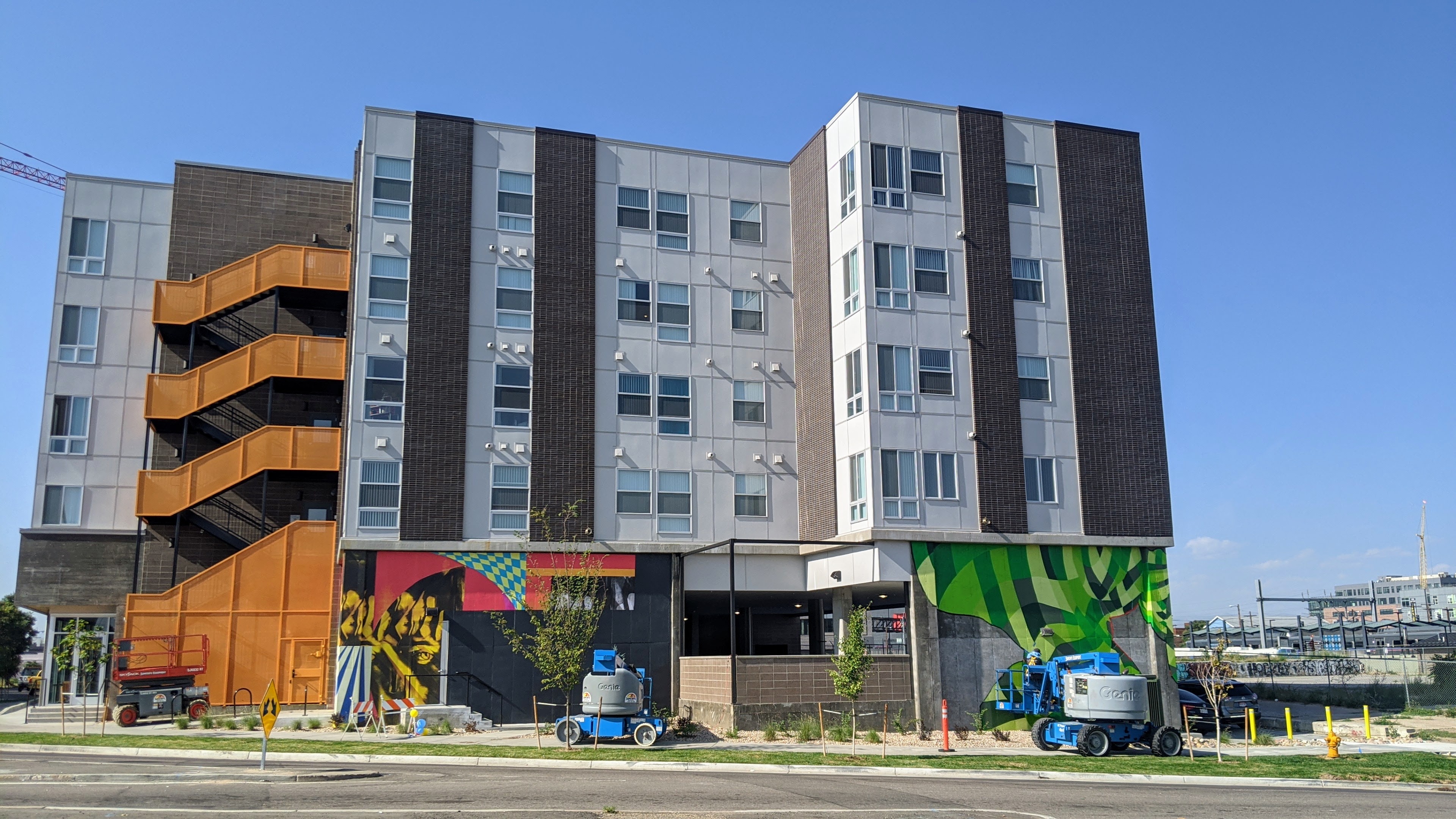 To fully grasp the issues that CRUSH should reckon with, it’s important to understand who runs the event as well as the evolution of the neighborhood it occurs in. RiNo is already hotly contested in Denver. Many critics refuse to even use the term “RiNo” to refer to that area, using the original names of the four neighborhoods it engulfs — Five Points, Cole, Globeville and Elyria-Swansea — instead. When the RiNo Art District started in 2005, it only had eight members including the two founders Tracy Weil and Jill Hadley-Hooper. The next year there were 50 members and by 2015 there were 225. Now, it’s more than just the Art District, it’s also the RiNo Business Improvement District (BID), the RiNo General Improvement District (GID) and Keep RiNo Wild (a new nonprofit fundraising arm).

In the 15 years since that small group of artists decided to take advantage of cheap rents and big warehouses and invite other artists to create with them, the neighborhood has fallen prey to the voracious appetites of developers and a city greedy for investment. These non-artists in RiNo have used the art and artists to line their own pockets, at great cost to most of the artists themselves. There’s a sociological term for that — “artwashing” — which is defined by the use of art in city planning and the impact that has on the artists.

When Mayor Hancock initiated the infrastructure project on Brighton Boulevard, which has cost the city roughly $41 million, it is estimated that those improvements brought in $850 million in private investments, in the form of bars, restaurants, apartment complexes and retail spaces. Unfortunately, as those investments poured in, many artists and long-time locals had to start moving out. Between 2006 and 2016, property values in RiNo rose by 46%. Rent prices in the area, which were once below the median for Denver, are now roughly $1,859 for a one-bedroom, or about $200 more than the median.

When Robin Munro started CRUSH (with help from the city) in 2010, the neighborhood was already considered gentrified by this Governing report published in 2015. But the consequences of the gentrification weren’t yet visible to everyone, even as construction boomed. Some existing neighborhood artists and art galleries were thrilled by the novelty of CRUSH, and by the possibility of either being involved or indirectly benefiting from it. However, many of those locals are no longer in RiNo — like Cayce Goldberg and his art gallery Helikon.

Perhaps all of this would be less troublesome if CRUSH had always admitted its role in the makeover of a historically all-Black neighborhood that was a hotspot for cultural activity until the 1960s. Perhaps the creation of CRUSH could have been done in conjunction with local Black artists, rather than giving the majority of decisions over to the founder Munro. After all, Munro is a white man who has laid claim to a neighborhood that was never his to begin with. A man who has acted as the gatekeeper to the street art in RiNo, since the first iteration of the festival more than a decade ago.

During his reign, he has helped many other local artists in their quests to be professional street artists, but he has also ignored, neglected, abused and refused a lot of other deserving artists in the process. It seems as if his core group of friends is always involved in the festival, and that predictable inclusion gives them a sense of grandiose entitlement, which they tend to show in ugly ways.

Munro might be a galvanizing figure for many in Denver’s street art scene, but unfortunately, that has given him a sense of power over others. When a young female artist painted a mural in the alley of Green Spaces last year, for instance, Munro tagged it with his graffiti moniker and complained about not being consulted. Just this week, two women have come out on social media concerning violent sexual assault allegations against Munro —  which has led to comments on her post from other women saying they’ve experienced similar treatment from Munro.  The RiNo Art District has responded with a statement promising an investigation into the matter and a temporary suspension to any work contracted to Munro until the investigation is over.

The other organizers of the festival have been problematic in their own ways. For CRUSH in 2018, the Canadian-based company Project 16 (who owns the art gallery Station 16 which had a stint in Zeppelin Station) took over the logistical operations of the event, adding signage for artists, a headquarters and extra events like Secret Walls. Some of those activations were positive for the festival, but there was a lot of blowback about bringing in an outside company to run a local’s event. Basic mistakes, like misspelling artist’s names in the press kit, lent credibility to the idea that Project 16 was in it for more nefarious reasons than supporting street art. Since then, local production company Two Parts has taken over the organization of extra events and the general schedule of CRUSH, while the RiNo Art District has enveloped the rest.

To this point, CRUSH has resulted in two things — allocating the control of street art in RiNo to the founder and his friends and quenching the financial thirst of developers who saw dollar signs where others saw street art. Munro is not entirely to blame, neither are the developers or organizers. It’s the increasingly toxic stew of them together that is causing fractures in the event and in the community that feeds it.

However, CRUSH has undoubtedly elevated the careers and experiences of many artists who will try to protect its reputation. In that way, CRUSH is wildly triumphant. Artists in Denver, and beyond, dream of earning a wall and adding to the open-air gallery. In the last five years, women and BIPOC artists have been more involved than ever before. Collaborations between artists have created unique and awe-inspiring murals. The art is mostly protected from censorship, with politically-charged pieces, sometimes that attack the RiNo district itself. Articles (including many in this magazine, written by myself) have extolled the victories of CRUSH and in many ways, lent to the enthusiastic response of the festival by locals and transplants alike. 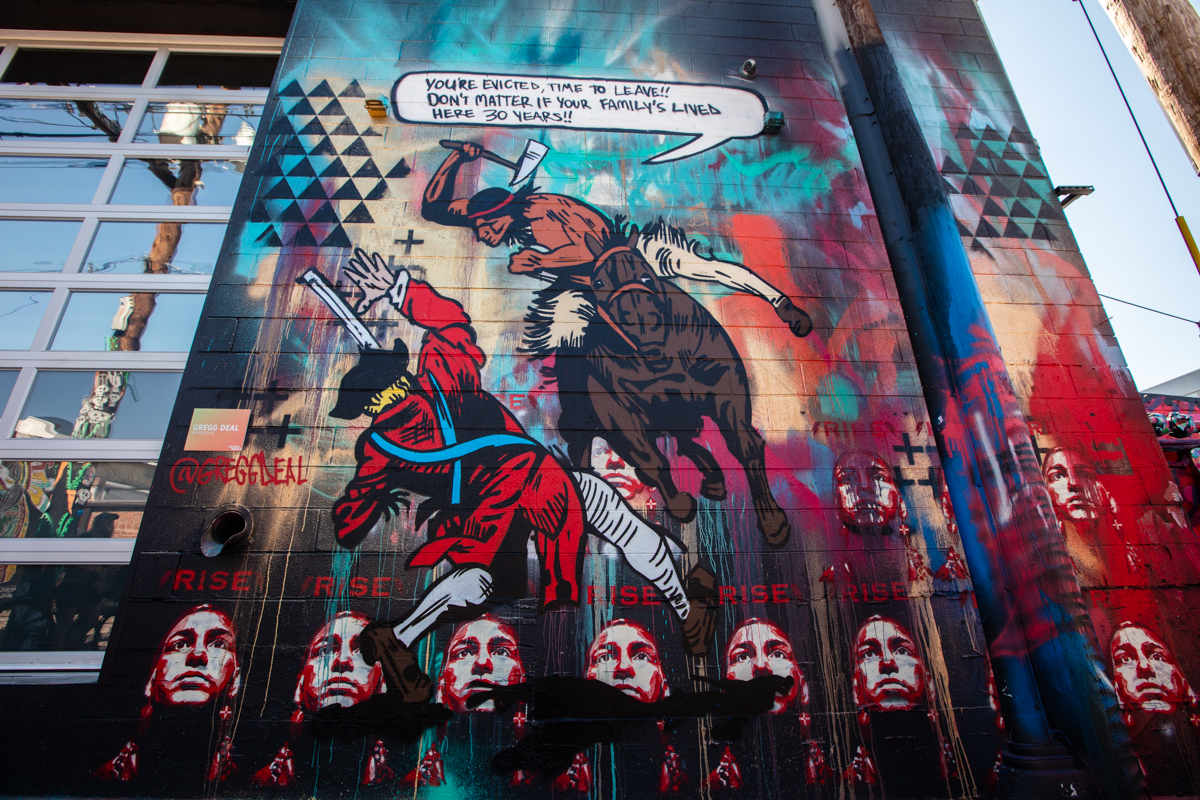 What is important now, however, is that CRUSH starts to understand the role it has had in the controversy about RiNo, and either leans into it or does more to ensure the festival benefits the whole community and not the parochial interests of a select few.

But, if CRUSH wants to practice what it preaches, it should recognize that it is not innocent in the continuing gentrification of RiNo, and therefore the take-over of a historically Black neighborhood and the removal of many local artists and families in that area. It is no longer the improvised graffiti festival with a chip on its shoulder, showing the authorities that street art isn’t criminal. The founder shouldn’t act like a gatekeeper to a neighborhood that was never his to begin with. And the organizers need to focus even more of their efforts toward adding value to existing buildings and businesses before adorning fancy new apartment complexes. If CRUSH really practiced what it preached — Creative Rituals Under Social Harmony — it would do more to ensure that the artists who participate could afford to live in the same area they help add property value to; it would try to ensure that all local artists were given fair chances at participating; it would add leadership roles for administrators of color (preferably from Five Points); it would engage with more grassroots community groups like Denver Day Works (something that was proposed in 2017 when Meow Wolf was a sponsor).

And so it is, in adolescence, that we must learn how our actions have consequences we may or may not have intended. But the beauty about acknowledging our own power is that we can harness it for better intentions and hopefully affect better outcomes. CRUSH has the opportunity to redefine its purpose in its second decade of existence, but only if it steps up to the challenge first.