After a Decade in Prison, An Influential Denver Graffiti Writer Finds His Groove Again

–
Street art in Denver has become the new norm, but with that city-wide transformation, it can be easy to forget how (and who) started painting on the walls and in the alleys. The OGs of the Denver street art scene are first and foremost graffiti writers. There are still a handful of these graffiti writers who have withstood the test of time and continue to prove their expertise in the Denver streets. They are the pioneers of urban art in Denver, responsible for not only the reluctant tolerance of graffiti writing but also responsible for the epic rise of street art and murals (to combat graffiti, in some cases). One graffiti writer, who goes by Tuke, has an inspirational story worth telling and a style worth following, though his path to his current success has been unconventional.
– 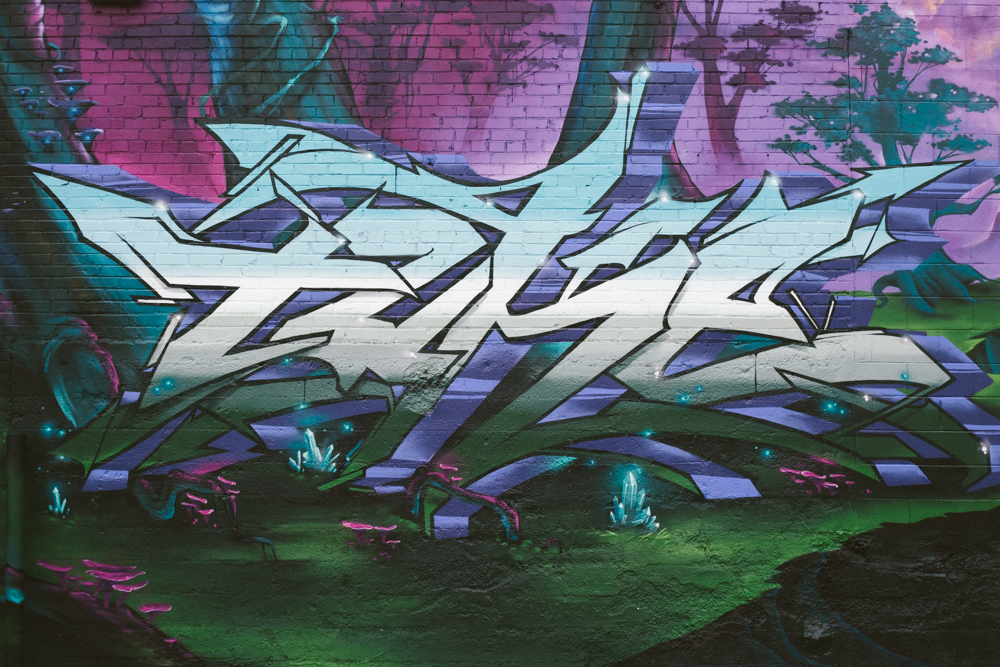 Born in Sedona, Arizona, Noah Baker (Tuke) was raised among artists of all kinds in a town known for its spirituality and scenery. He moved to Denver right out of high school in the early ’90s to attend what was then the Colorado Institute of Art, pursuing a degree in Commercial Art. But the real schooling he received in Denver wasn’t inside a classroom — it was in railyards and along highways and in alleys. Even though he’d been exposed to graffiti style in Arizona — and especially through media like MTV, skateboard culture and magazines — part of Tuke’s interest in graffiti, as opposed to studio or gallery art, was also an interest in punk ideologies that prescribed to DIY resistance tactics.

His move to Denver was immediately validated, not only because he could act on those urges, but because he found other people he could share that attitude (and spray paint) with. Most of them were transplants from other graffiti havens like New York, Los Angeles and Las Vegas — like Rasta68, who had been known as a graffiti “king” in Denver throughout the ’80s and into the ’90s, as well as Emit. Z-13, who is attributed as one of the first (if not the first) graffiti writers in Denver was tapering off by the time Tuke arrived, but his style and rebellion helped establish the scene for other artists, including Eye Six, Mac and Jher — all of whom painted alongside Tuke.

At that time in Denver, and in other urban areas throughout the US, enforcement against graffiti was extreme and tolerance or support was basically non-existent outside of the underground scene. The main locales for graffiti writers in Denver to practice and “bomb” (a term used to describe illegal painting) were mainly along the railyards and South Platte and in what is now LoDo — all of which are drastically different now than what they were in the ’80s and ’90s. City officials and other citizens were vehemently motivated to eradicate graffiti, and by 2000, they’d managed to redevelop some of the most important spots to graffiti writers and build Elitches, the Aquarium, Coors Field and the Pepsi Center.

But despite that, the crews in Denver continued to pave the way for the future of public art with the sheer act of expressing themselves in “public spaces” — or abandoned, downtrodden and forgotten spaces — and expressing their discontent at a society and system that did not care about them. “Not being oppressed by a system or society that implies — subtly or overtly — that you don’t matter is a courageous act, so I’ve always felt that those who do [graffiti] are powerful. [Graffiti] was born out of that necessity to speak up, to speak to the world and say ‘I do exist.’ And for that matter, to say it to yourself as much as to the world,” described Tuke.
– 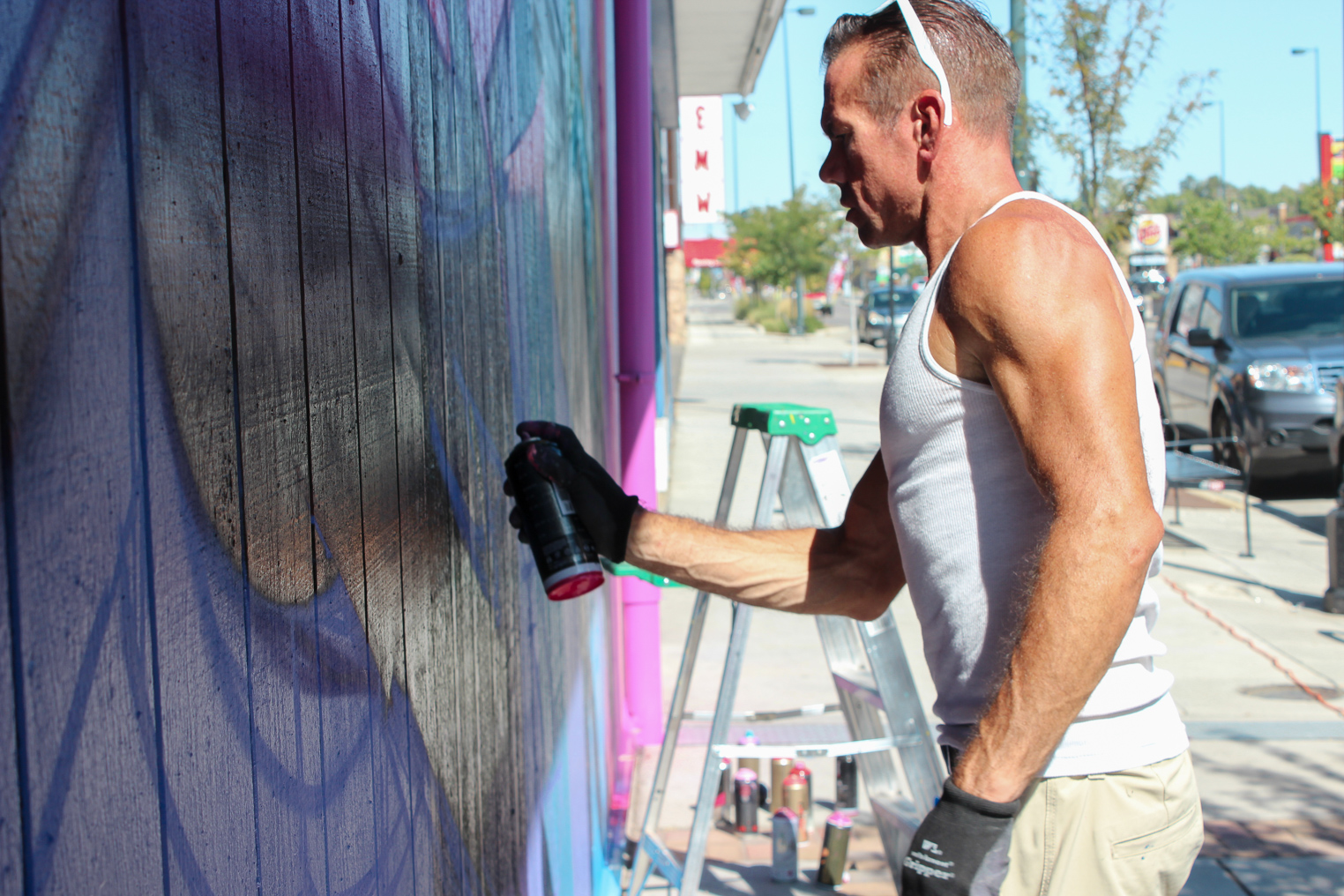 Tuke was (and still is) a member of the DF Crew and it was with a fellow crew member, Emit, that he started changing the Denver graffiti scene, before all the redevelopment. Emit had his own prestige in the graffiti world, coming from the East Coast (and birthplace of graffiti) and pushed Tuke in the technical aspects of lettering, while Tuke inspired Emit with his tendency toward organic forms and landscapes.

“It’s not to say in any way that other people weren’t painting and doing what we were doing here in Denver,” Tuke explained. “There was already a scene that existed that started many years before us, but the energy that the two of us brought to the scene here was unmatched. I’d traveled a lot as well [as Emit] and seen what I wanted in Denver and tried to push that energy here. We started focusing more in the direction of production work — where we were doing bigger walls with more intense backgrounds, working outside the guidelines of what was going on elsewhere at that point in time. People really took notice of that, not only here, but also outside of Denver because we were getting published. That kind of activity really helped get Denver on the maps.”
– 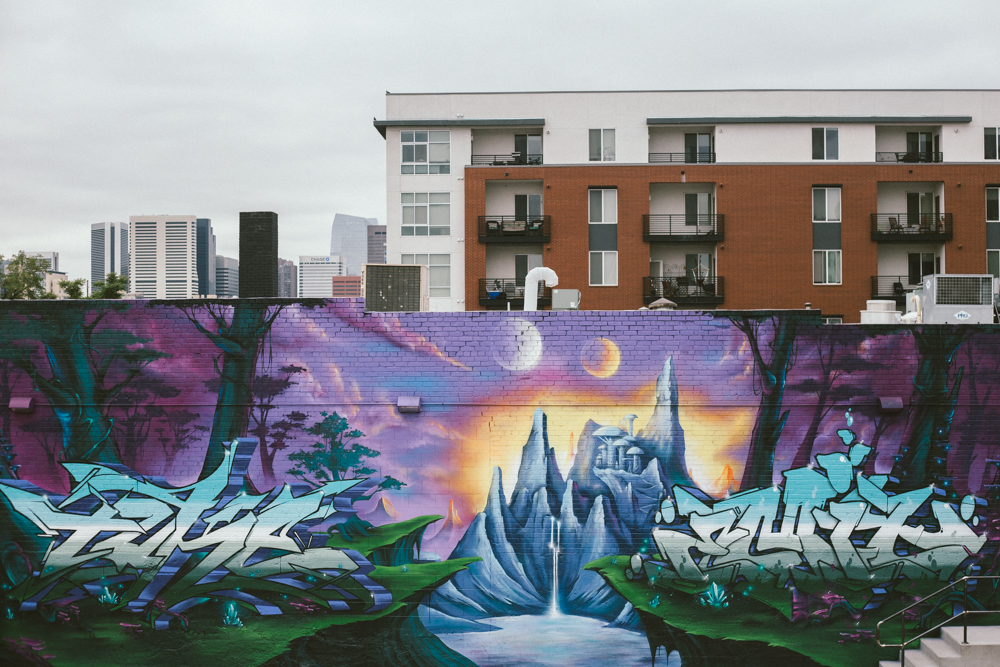 The most recent piece created by Tuke and Emit, during CRUSH 2018 on the side of Yeah Baby

Of course, the “maps” still only included an underground movement and overall acceptance of graffiti was perhaps at an all-time low, putting artists like Tuke in precarious situations. By the late ’90s, Tuke was finding no fulfillment from his degree (which he received in 1993) and often spent his free time spray painting, illegally, while holding part-time jobs. At that point, when he was in his mid to late 20s, he was facing a personal crisis and tried to fill an emptiness with drugs and alcohol. Several of the Denver graffiti crews weren’t getting along either, leading him to shy away from painting to avoid drama. All of these factors combined, leaving Tuke feeling helpless and lost. He was arrested for drug dealing, then spent five years in and out of jail for similar, repetitive offenses until he reached a point where the prosecution wanted to apply habitual sentencing. This means that the maximum sentence for a crime can be multiplied up to four times, if tried in court. Tuke’s sentence was to be 24 years if he settled and 72 if he went to court — so he settled.

“Pretty quick after getting [to prison] I started really trying to pick it all apart. I’d had enough time to sit and think about it and try to clear my mind. At that point in time I realized I needed to do something to change the whole cycle that was going on. I started getting back into my art, as well as many other means to get back to where I’d started before the mess. So for a decade I was just painting, drawing consistently, everyday. I was preparing myself for when I got out and could get involved in graffiti and the art scene in general, so I wouldn’t be dated. I was challenging myself, trying a lot of different styles, mediums. Whatever I could do, in my eyes, to prepare myself for my release.” – Tuke 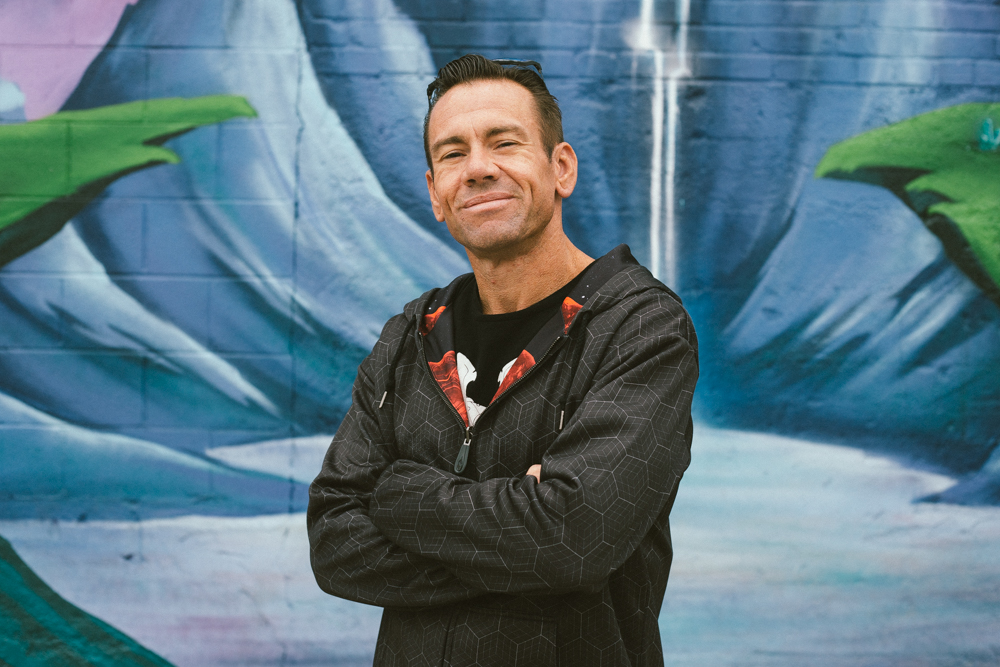 Even though his sentence was almost two-and-a-half decades, Tuke was released after 10, at the beginning of 2016. Curiously, without his passion and dedication for art, he may still be in prison. With his incarcerated revelations, Tuke turned his life around and positively contributed to the community around the facility through practicing art with a few other creative inmates, ultimately putting him in a position to accrue “positive” time, or time served without bad behavior or infractions. At first, he bought art materials with his small allowance, but when the prison took away that possibility, he lucked out with a “job” (that earned him roughly $12 per month) to help with art projects, lettering tasks and other artistic projects. Some of those projects included designing banners and decorations for high school dances, creating backdrops and murals for the nearby historical society and even painting murals inside the facility.

He even started to make money outside of the “job” when other inmates, as well as guards, started commissioning him to create special pieces as gifts or for themselves. “You could see the effect of [the art], it was reciprocal. We were putting out this good energy and working really hard and getting it back. Not always, but a lot of the time,” he remembered. “We were also occasionally getting letters from the community or the high schools thanking us for our hard work. Those were things that felt good — despite being in the situation I was in, I was able to, in some way, give back.”

Tuke tried to keep up with the graffiti scene in Denver even while he was locked up, but ultimately his style was evolving separate from the community, due to the art projects he was assigned. Working beyond his comfort zone, as well as outside of his personal style, he honed certain skills and used some of the techniques he had acquired with his Commercial Art degree. His time in prison served him as well as it could, given the circumstances, as each painting, banner, mural and random commission fueled his determination to be released so that he could find a way back into Denver’s art scene. And then, once he was released, all those mind-numbing hours of sign painting and typography work for the prison came in handy as he started landing paid painting gigs.

So far, in the two years since his release, Tuke has succeeded in re-entering the art scene in Denver, although it’s a much different landscape from when he was last involved. He missed the second wave of redevelopments that Denver underwent, including the conversion of the Cherry Creek Bike Path from graffiti walls to commissioned pieces of street art, and he missed the start and growth of RiNo. It’s impossible to say whether Tuke would have been a better artist or graffiti writer if he had stayed out of prison, but what is evident is that he, ironically, stayed out of trouble during that decade, which was when Denver’s enforcement of graffiti came to a palpable head. So now, as graffiti has been accepted by many (especially when it’s requested or allowed) Tuke may be in a sweet spot to create the style of art he loves the most and also make a career out of it. And he’s wasting no time in pursuing his goals.

“Because I’d been reading all these self-help books and putting my focus on [my release], I’d already begun building this plan of what I wanted my life to look like. I’d written down all the things I wanted, and I ran across it a while ago when I was re-organizing my closet, and everything I’d written down has come into existence, for the most part,” he said. “So I think that’s part of it — this visualization and making a note of it and having this subconscious map of where I’m going. Even if you’re not intentionally taking steps, it’s about ingraining it and putting it out into the universe. It all goes into this mentality of mine where if you plant these seeds of positive transformation, the universe or god or whatever name you want to put on it, acknowledges that and starts putting things in your path that will help.” 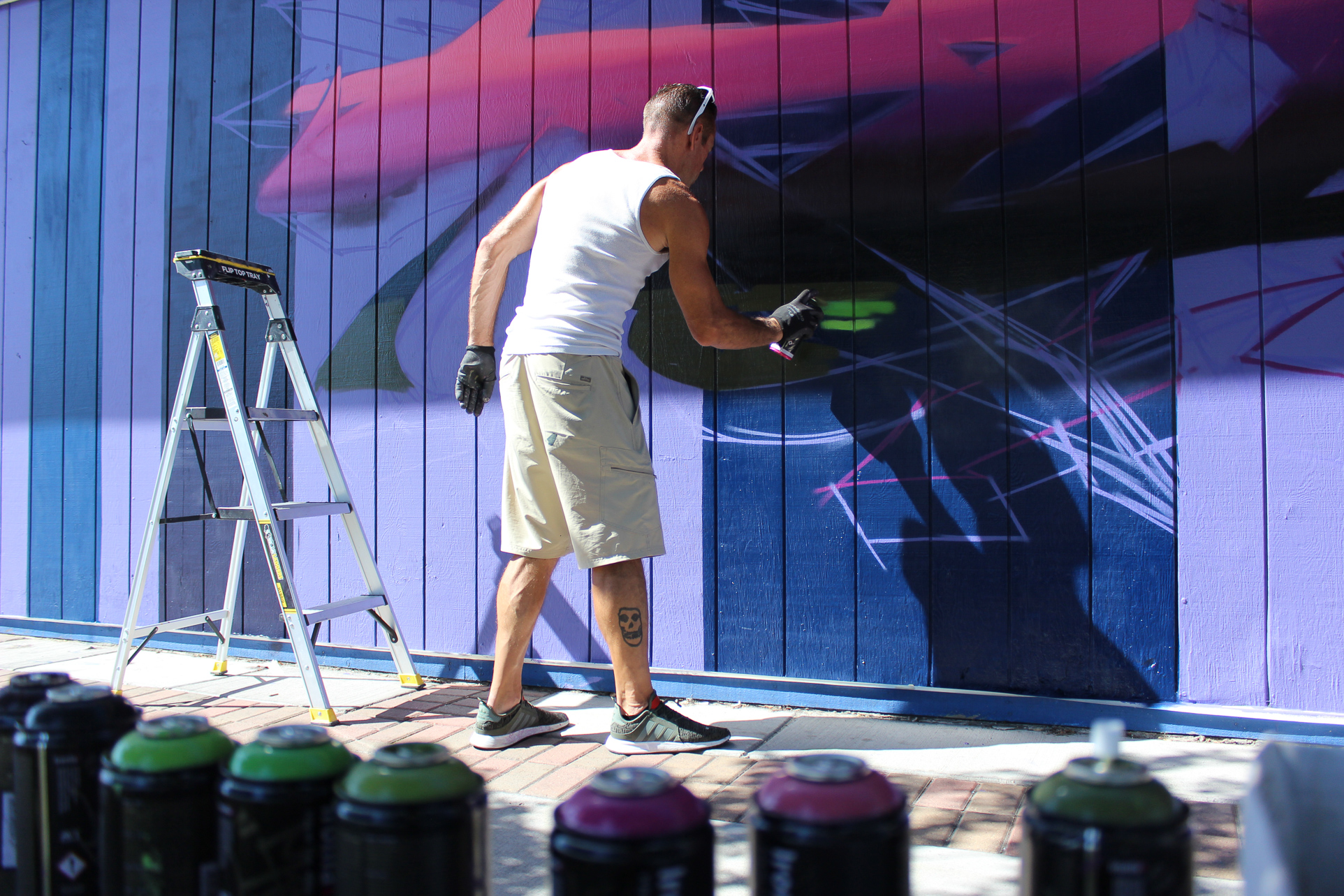 Don’t let the positive transformation talk fool you into thinking that Tuke’s graffiti isn’t still political — in fact, his change of heart in prison added to his informed opinions regarding the art form and its importance to society. Though the subjects of his pieces shy away from direct political messaging, he still feels passionate that the act and style alone is a significant form of resistance. And in 2018, after 15 years of State supervision, Tuke’s resistance fights against the attitude that graffiti is nothing more than vandalism — because his love for graffiti writing served as a shining light at the end of a long tunnel that many people in similar situations never see or reach.

All photography by Bridget Burnett, unless otherwise noted.