Benjamin Collyn is a custom fashion designer and Denver RAW artist, who started his line, Benjamin Collyn, more than two years ago. Collyn has been designing outfits since his teen years, however, his knitwear design business blossomed into a fashion company just a few years back. In his even younger years, Collyn always had a project at the tip of his fingers. His creativity sparked this interest in taking on various tasks. For Collyn, his desire to pursue this creative path of design comes from various outlets.

“Since I had been designing crochet and knitwear patterns for a while, I became fascinated by fit and silhouette. It wasn’t until I started weaving fabric that I became excited about sewing it into garments,” said Collyn. “This is when it all clicked. I love the tactile experience of fashion design, and that it says so much about a person. You can really wear your heart on your sleeve, or become a completely different person just by changing what you’re wearing.”

For many artists, the very first design offers a multitude of inspiration for future projects and works of art. In the interest of Collyn, one of his initial designs consisted of a recital gown. He described this piece as a “crowd-pleaser,” using fabric he designed by his own black and white photography. “I used a photo of backlit branches to create a striking print. The skirt used this branch fabric, and the top was a simple black bodice,” explained Collyn. 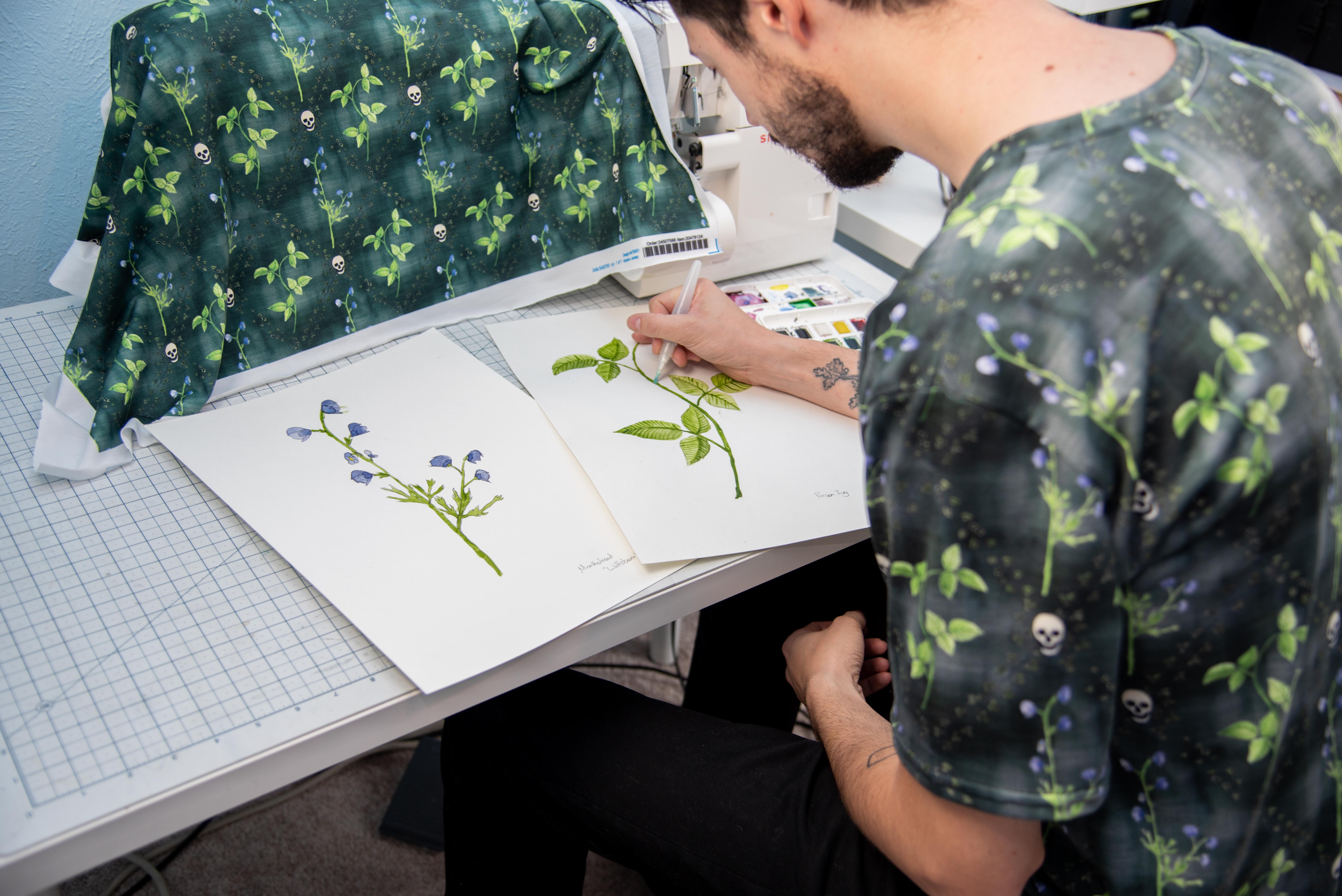 The overall design process for any artist has many components and attention to detail. Collyn’s background in the textile industry has tremendously helped him when it comes to different fabric techniques, and how to get them to work a certain way. “It’s all about listening to the fabric, then working with it. It’s certainly fun to break the rules here and there, but some textiles are more stubborn than the designer’s will,” explained Collyn.

In May, 2019 Collyn showed his first collection. The experience and takeaway from it was something he honors immensely.

“Overall, it was an exhilarating experience. I was contacted the first week of April and had 10 looks and eight models to conjure up in less than a month. Luckily, I have great friends and had about four to five looks done already. It was a harrowing few weeks getting the remaining pieces made, while at the same time working a full-time job,” explained Collyn. “In the end, it was worth it to see everything walk down the runway.”

Fast fashion is talked about and appreciated within the fashion community particularly now more than ever. Exposing awareness and practicing sustainability along with upcycling is of vast importance to Collyn. A love for environmental biology and a background within that field has a place in Collyn’s heart he can’t ignore. “As most of us in the industry know, fashion (more specifically fast fashion), is one of the top polluters and contributors to climate change,” said Collyn. “I think it is up to us to do our part in order to keep waste to a minimum and clothing out of landfills.”

“I am committed to working with sustainable materials/practices etc. in order to lessen my impact on the environment,” said Collyn. 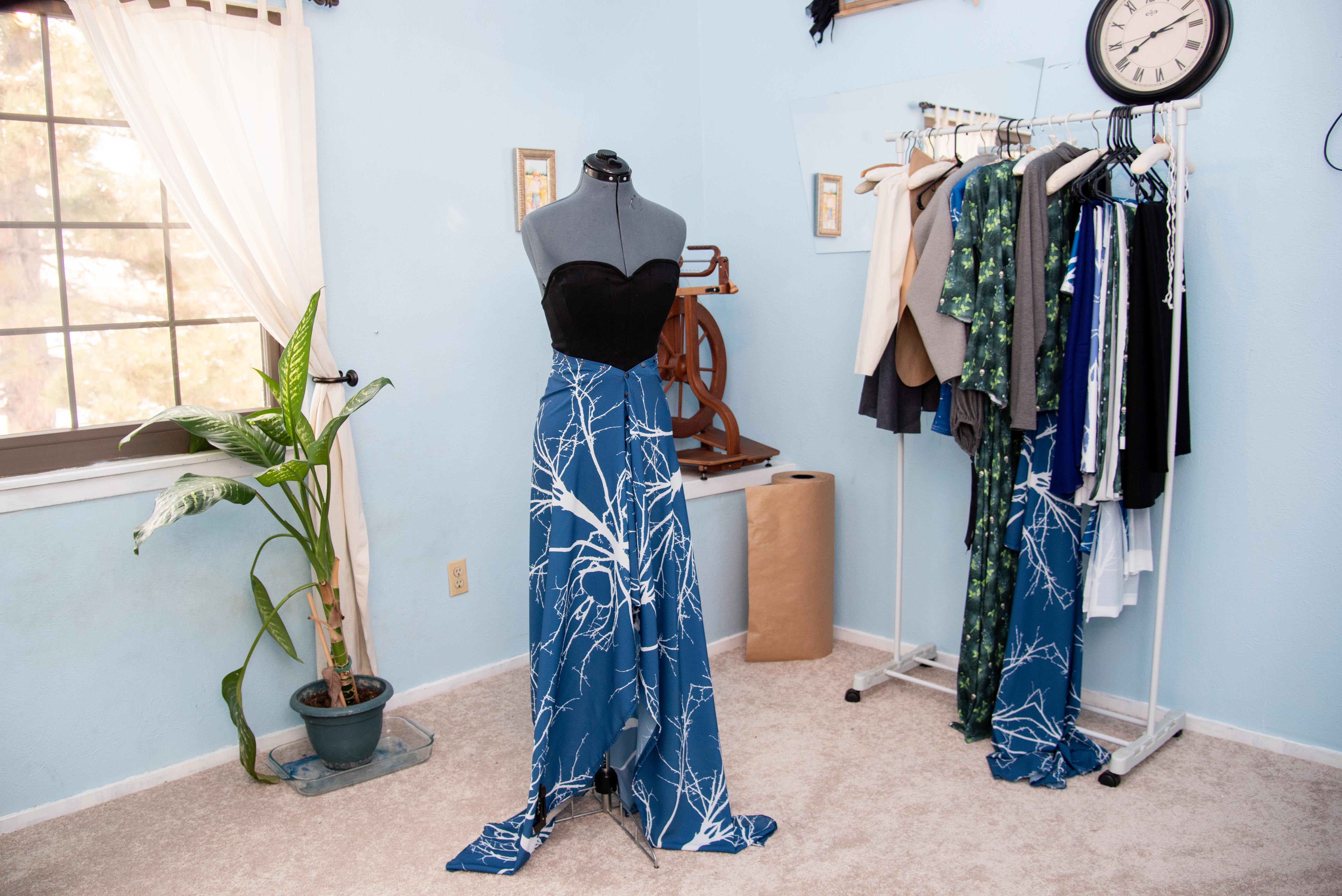 On top of being a greatly talented and versatile designer, Collyn is also a Denver RAW artist. With this involvement in a community of like-minded creatives, he has had opportunities to connect and showcase his work even further.

“I had been doing fashion drawings for the month of October during an event called Inktober. Every October, a new prompt list is released, and artists draw/illustrate something every day using those prompts,” explained Collyn. “After October ended, I chose a few sketches from that time period to create real garments out of them. RAW found me via Instagram and asked if I wanted to participate in their May showcase.”

“I think having the platform to show my work and meet other designers helped me think it was possible for me to actually take my fashion to the next level. RAW is very supportive of their artists, and provide great resources in addition to the shows,” said Collyn.

Collyn has a new collection, called Vivarium, which has allowed him to explore many different avenues of expression within his line.

“First, I re-designed my branches print to create a wintry modern vibe, cleaning it up a bit and using the lovely classic blue as a backdrop. Inspiration from other print and silhouettes draws inspiration from the Victorian era. Moreover, the tailoring and idea of freedom versus restraint play a huge role in my collection,” explained Collyn. “I was also inspired by the Victorian hobby of creating Vivariums, or indoor greenhouses. This would bring exotic plants inside to stave off the cold and damp British winters. Furthermore, the two prints play off each other in a sort of counterpoint — the cold and bleak branches and warm inviting greenery. While the green is certainly bright and cheerful, I took another Victorian obsession, poison, and played around with it. Each plant represented in the print is poisonous. However, while potentially deadly, they are also very beautiful. In general, I love playing with these types of contrasts.”

The hard work and creativity won’t stop for Collyn now or in the near future. He will show this collection at Vancouver Fashion Week for their FW 2020 show at the end of March. You can expect to see anything from streetwear, red carpet looks and traces of couture scattered throughout.

All photography by Madison McMullen.