–
Colorado’s high country — aka west of Denver — is stepping up its cultural game this summer with some impressive art installations and displays that are worth the drive. For decades, these little mountain towns have focused on the world-class adventures that are accessible from their doorsteps — mountain biking, skiing, snowboarding, fishing, camping and anything in between. And in the process of promoting the action-packed sports that come with million-dollar views, some of those towns fell behind in the evolution of art.

READ: 21 Outdoor Art Events to Attend in Colorado This Summer

Yes, we’ve all seen a glorious oil painting of aspens or a breathtaking sunset over snow-capped mountains, but art in the mountains doesn’t have to be such typical romanticisms over the scenery. Which is why we searched out some art projects in the Rockies that are turning away from the status quo and delivering stunning pieces of art that don’t abide by your typical “mountain cabin” aesthetic.

MPek has been making splashes in the Denver street art scene for a few years now, though he originally called Mexico home. Using his heritage and home as inspiration, MPek creates murals and other pieces of street art that stand apart from others. Not only are there hints of ancient cultures in the geometry, symbolism and overall composition of his work, but he seems to have a special knack for mixing the colors seamlessly, lending to the polished appeal. But MPek went higher than the Mile High City this summer when he painted two murals — with the help of another artist who goes by Verse — in the little town of Fraser.

But this mural is only the start of a larger effort from the town — the Fraser Mural Project — which put out a request to artists earlier this year. Nine applicants were awarded walls to paint and a small amount of money from the $15,000 town budget. Another exciting and new aspect of this project is that residential buildings can now be adorned with murals like commercial spaces, expanding the possibilities for art in the community. 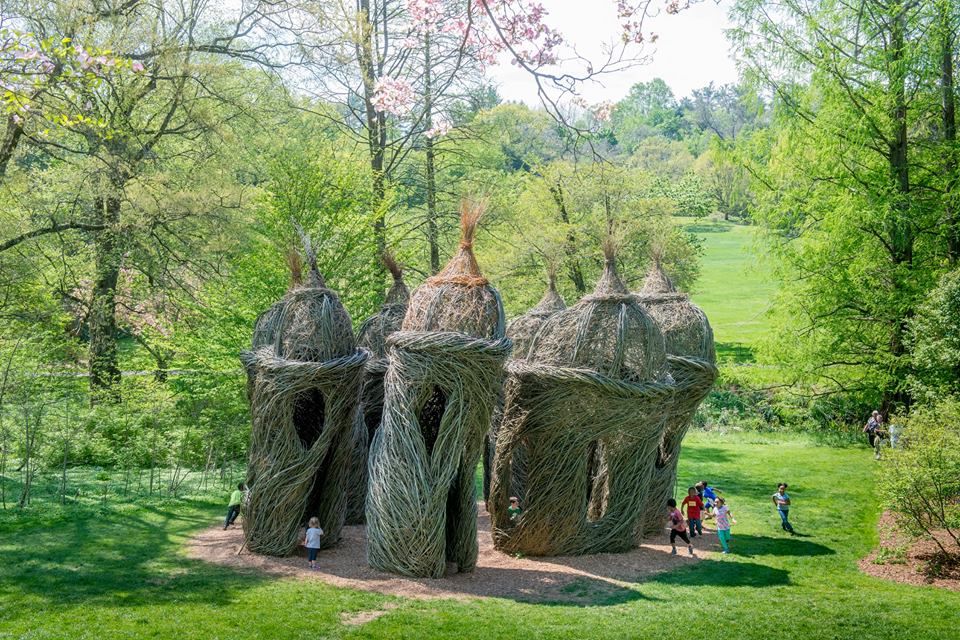 Stickwork by Patrick Dougherty. Photo courtesy of Town of Vail on Facebook

Artist Patrick Dougherty makes giant stick installations for a living — and has been doing it for the last three decades. He calls them Stickwork and their organic beauty hides the intense building and fabrication process that each one entails. From the first post that is dug into the ground, a Stickwork takes three weeks to install — a time limit Dougherty sets for himself and his team of volunteers in order to have time to build all the projects he wants to in a year.

For his most recent piece that was only completed last month, Dougherty worked with the Town of Vail to create seven structures between the Gerald R. Ford Amphitheatre and the Betty Ford Alpine Gardens. In an interview with 303 Magazine, Dougherty explained ” “I realized early on that a good sculpture has a lot of personal associations to it. People may not see the drawing quality of it, but they think about a bird’s nest, or their first kiss, or environmentalism or how much the woods mean to them. So I think there’s a kind of a practicality in viewing or some kind of down-to-earth associations that lead you along and enhance the experience because you have a starting point in your own life for understanding it.”

Even though Dougherty and his team have dispersed, the Stickwork he designed and built will remain in Vail for at least two years. According to Dougherty, the lifespan of his installations depend heavily on the climate they reside in — and for Vail that’s good news because cold winters and dry summers will preserve the sticks for longer. When you visit the Stickwork, don’t be afraid to step inside and walk all around them — they are meant to be appreciated from all sides.

Aspen is known for the idyllic quality of its streets, with the quaint brick buildings as small accessories to the impressive and in-charge mountain range in the background. But Katie Kiernan — an Aspen resident who is an arts activist and supporter and a founding member of 212 Gallery — wanted to change at least one of Aspen’s streets. What started as a small inkling of an idea in 2015 culminated in the last week of June when world-famous street artist Shepard Fairey came to the mountain escape to install one of his breathtaking murals.

Even though it seems like a no-brainer to have Fairey create one of his iconic murals in the town, this project involved a good deal of convincing and collaboration. Different community members stepped up to offer advice or connections, including what wall to use (520 East Durant Avenue) and how to fund it. According to Kiernan, Fairey and his team basically donated the mural to Aspen, though the cost of materials was raised by residents and businesses.

Also according to Kiernan, no other murals like this one exist yet in Aspen, making this the first of its kind and hopefully the start of a street art transformation.

Breckenridge Steps Up its Art Festivals 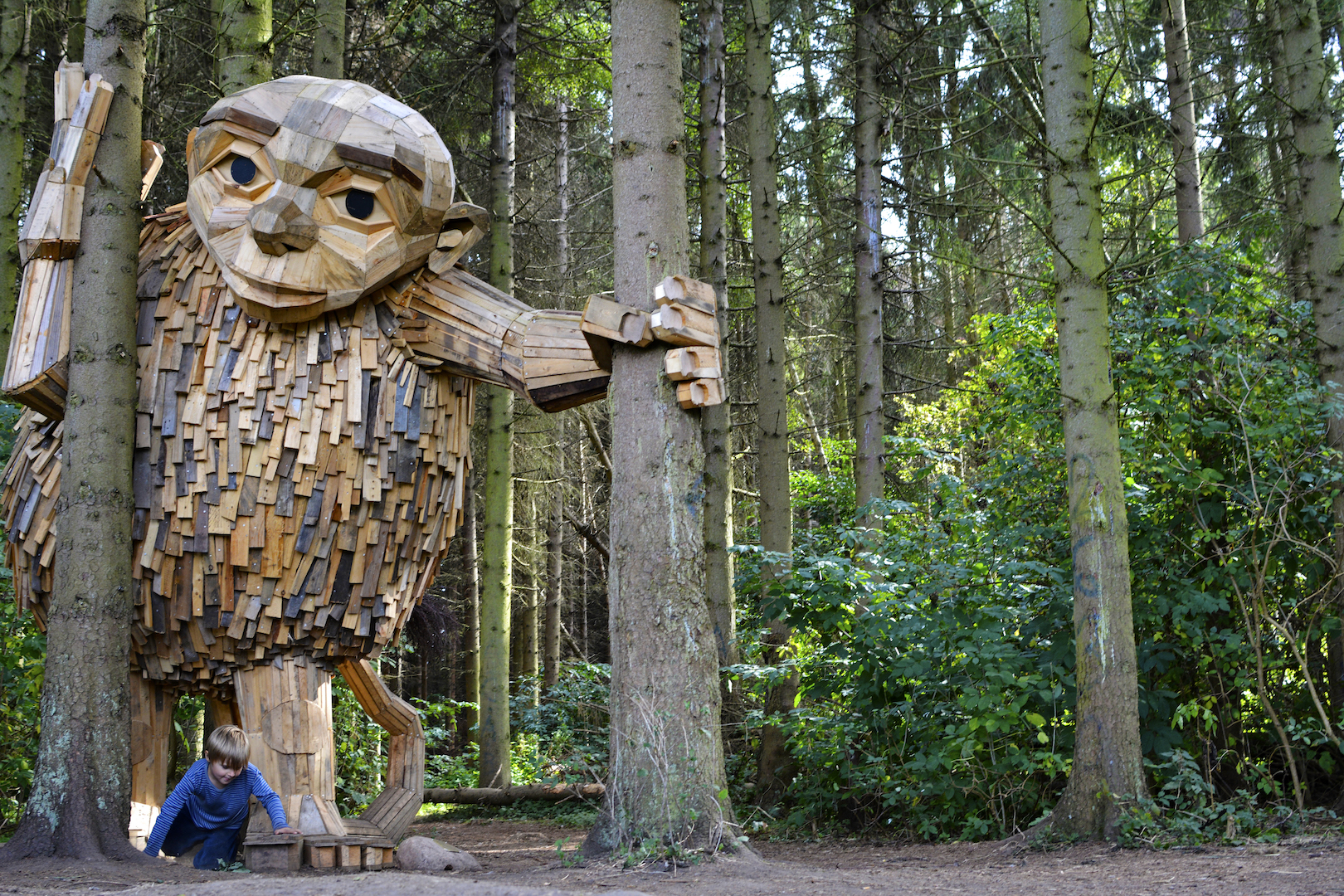 For the fourth year in a row, Breckenridge will host a week-long festival of arts in August featuring visual, audio, performance and installation arts called Breckenridge International Festival of Arts (BIFA). Though the festival obviously aims to attract national and international talent, it also highlights local artists heavily. Along with the artsy events, Breckenridge also curates experiences that combine the outdoor pursuits like hiking and biking (that the area is well-known for) with art and culture. For this year, BIFA will showcase some major acts — and though they technically should be categorized as temporary art events in the mountains, we think they are worth including in the list. Visit between August 10 and August 19 to see some or a few of them.

For the audiophiles, BIFA welcomes Andrew Bird and his folk-inspired musical whimsy, performing with Denver’s (and The Lumineers’) Neyla Pekarek on cello on August 12. For the more alternative crowd, Concrete Jams: Sk8 + Jazz will feature pro skaters Jordyn Barratt, Bucky Lasek and Andy Macdonald paired with music by the Denver-based band The Other Black. And for the fans of classical music, Icelandic composer Anna Thorvaldsdottír will enchant with new works titled In the Light of Air.

For visual arts, BIFA coordinated several impressive installations including the giant sculptures by Danish artist Thomas Dambo that use recycled materials (pictured above). Other ones to note are Tempting Landscapes by Hungarian artist (who now lives in New York) Edina Tokodi and Canadian-born, Boulder-based Michael Grab’s balanced rock sculptures. Along with the headlining art installations, BIFA also spends the week supporting local artists and galleries with events and viewings.

Breckenridge, along with the other mountain towns in this list, understands that the beauty of their landscape is only emphasized by interesting and immersive art installations. There can only be so many similar paintings of the scenery before you start to get numb to the glory.