–
Patrick Dougherty is a shaper of sticks, an avant-garde carpenter and a three-dimensional illustrator. For more than 30 years, he’s constructed roughly 290 installations across the world and they are all made of gathered saplings and wood. His waitlist for projects now spans two years, even though he manages to complete 10 “Stickwork” projects each year. For the last two weeks, he has been working in central Vail on his most current install which will be completed on June 22, 2018. Though the finished product is yet to be seen, there are a few things for certain — this “Stickwork” is composed of seven objects that reach about 15 feet in height and are leaning slightly, rather than standing straight. 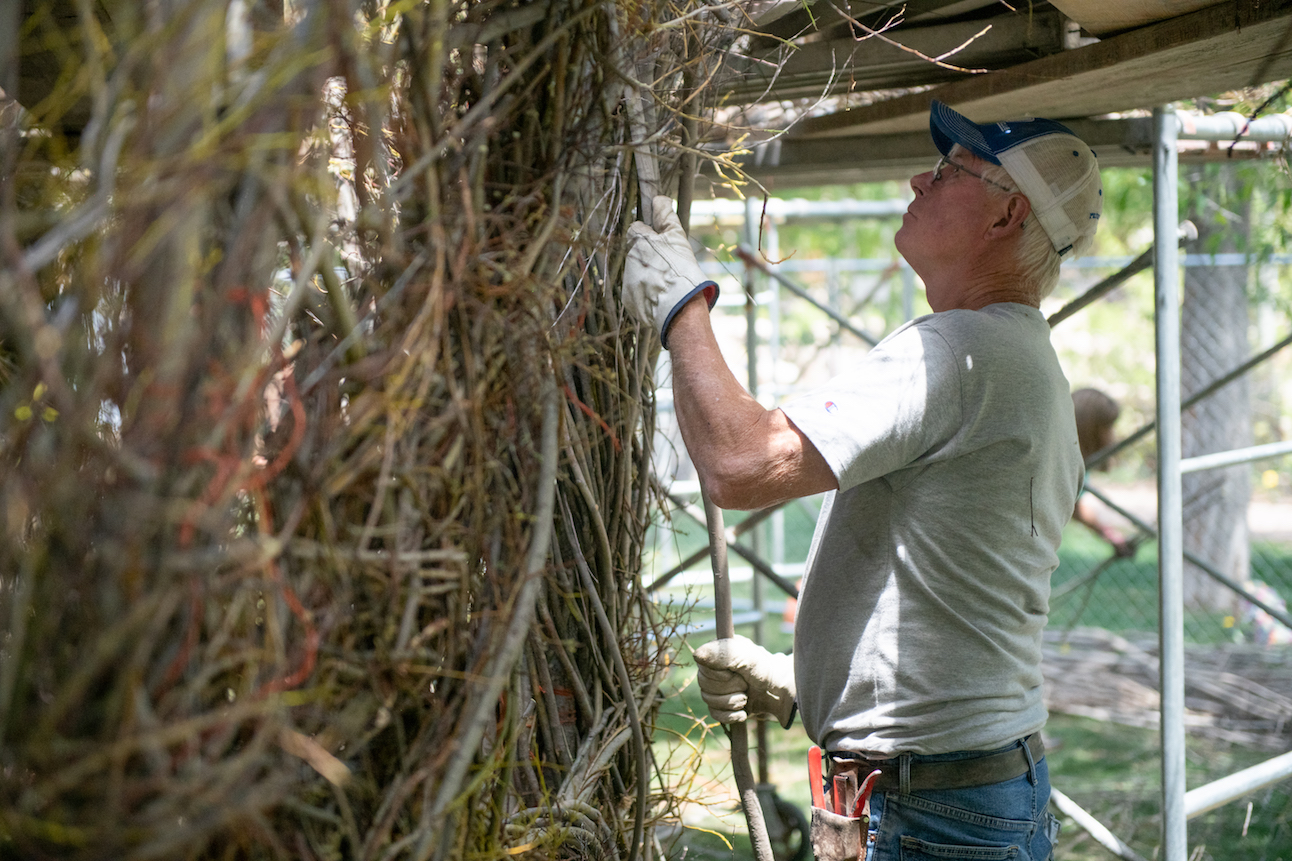 “Stickwork” is the term Dougherty uses for his unique creations — an apt name for the structures that rely solely on sticks for support and aesthetics. Each installation, though cohesive in overall style, is truly one-of-a-kind. Using a rough idea for a footprint, Dougherty allows the setting of his installations to inform the construction and also uses volunteer help for all of the handiwork. The Town of Vail sent out a call for volunteers in March of this year, and according to the art in public places coordinator, Molly Eppard, “we ended up getting about 50 total, and our volunteers are primarily from Eagle County but also from Utah. We also have a New Hampshire couple who extended their vacation time in Vail so they could participate this week.”

READ: 21 Outdoor Art Events to Attend in Colorado This Summer

Dougherty added, about using volunteers, “we have lots of different levels of work. Generally, people here in Vail are more health-conscious and active and so no matter their age, they seem to be handier than in other areas. But we make sure it’s fun because you can’t create something special if you are scared of making mistakes. We just awaken the child in these people.” 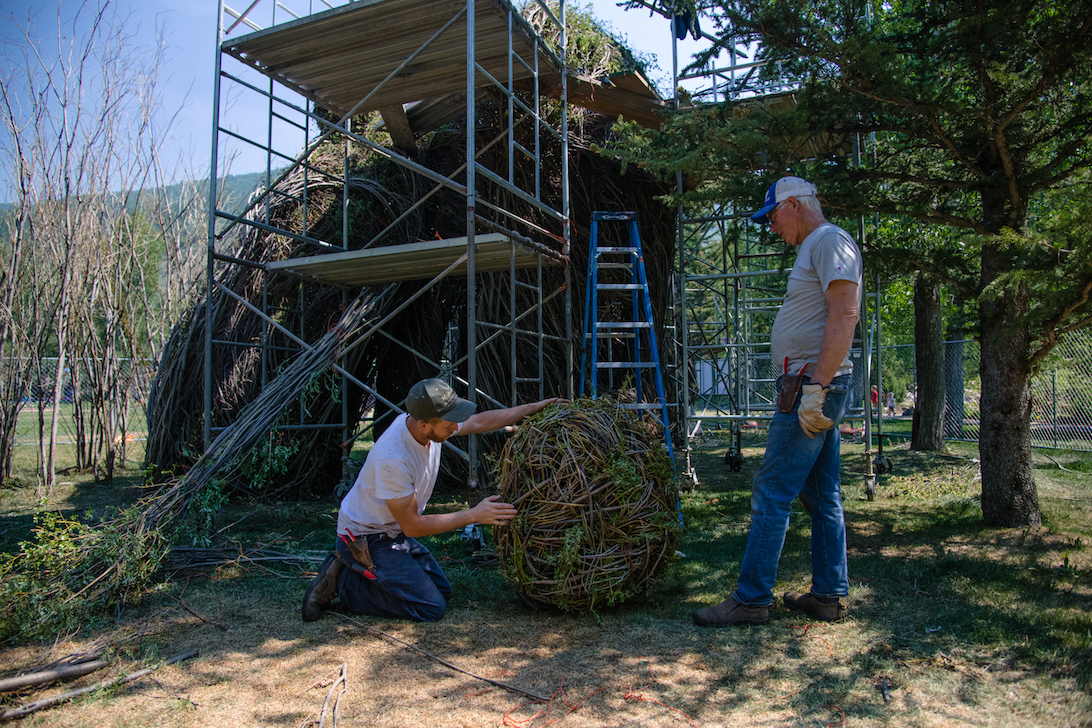 The materials are almost always gathered from surrounding areas, which means that installations in Hawaii might use eucalyptus or coffee trees whereas East Coast projects usually use maples. In Vail, willows are the primary material and have been provided to Dougherty through multiple channels, though the lion’s share comes from trail cleanup and removal of debris after the snow melted. Other areas have different reasons for clearing trees, and Dougherty tries to maximize his use of these trees as well. “Material abounds and usually there is some kind of thing going on where they are clearing a forest, or a trail, or maybe even clearing for a new shopping mall. I am the recipient of a lot of material that comes from urban development,” Dougherty added. 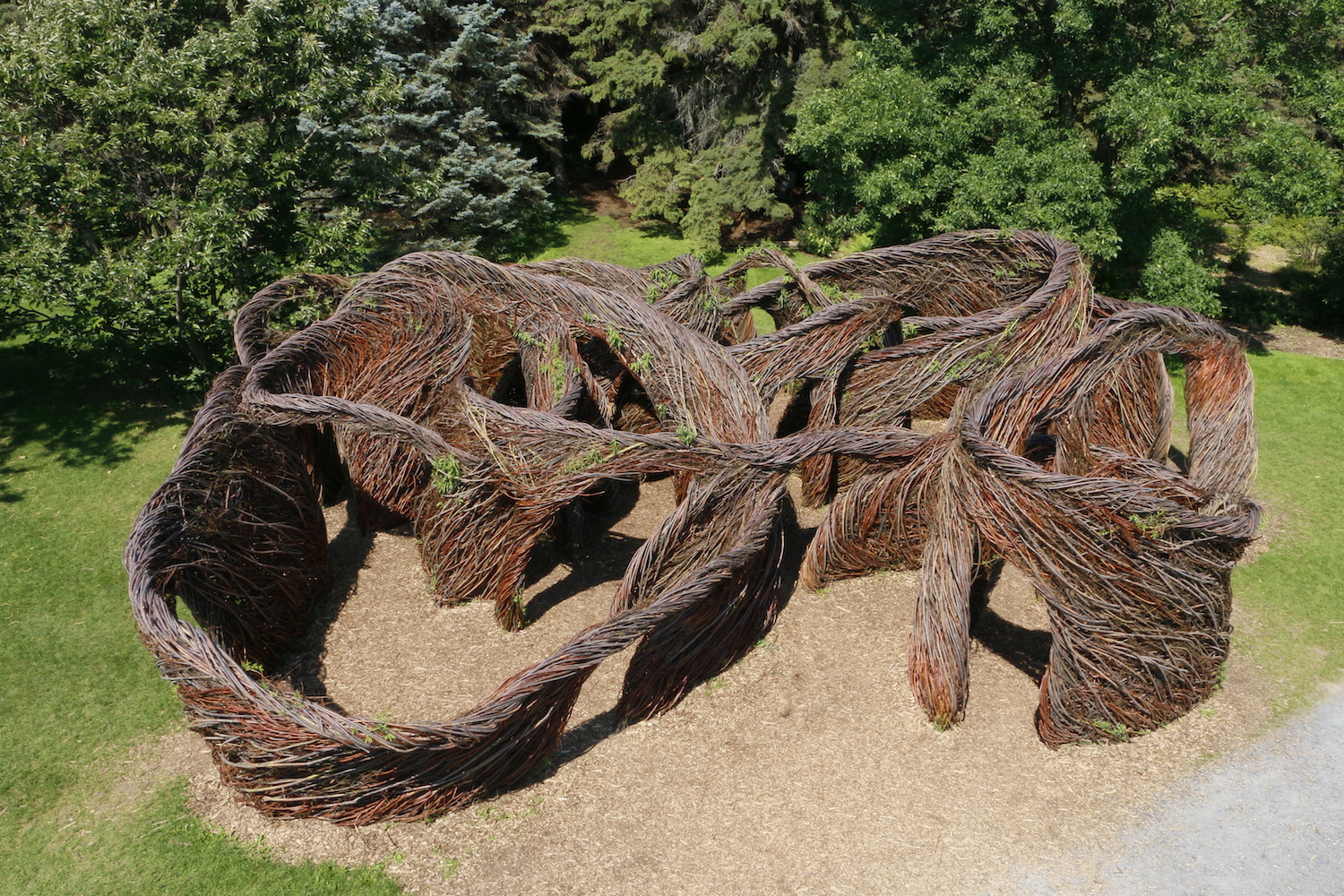 “Thrown for a Loop” at Montreal Botanical Garden. Photo by Lise Servant, courtesy of Stickwork

Even though the facade of these Stickwork installations give the appearance that they have grown from the ground up naturally, there is a great deal of sculpting and shaping the sticks to achieve the finished effect. “When you see the finished product you can’t see the structure and that adds to the illusion that these things have a life of their own, they’re separated from how they work,” Dougherty disclosed. So we had to ask him how they work.

First, Dougherty starts by securing large sticks — more like small trees, as he described it — into pivotal points of the footprint. Then, tree saplings are tied with cords together and between those larger posts to create a matrix that ultimately provides a backdrop for the final touches (and the cord is cut away once the structure is soundly in place). The next step, though not very important for structural purposes, is what mesmerizes people of all ages. More saplings are bent and twisted and molded across the foundation matrix, giving the Stickwork a distinctive and yet nostalgic beauty.

“What I learned early on is that once you remove a stick from the woods, it has the overtone of the woods, but it also is a line with which to draw. If you hit a piece of paper with a pencil you strike it with one weight and end with another, so you make a series of tapered lines, and those tapers tend to have a sense of motion in them. Working with sticks is the same, you can imbue the surface with a kind of luxury of line and a line-logic that makes it seem like the objects are whole and even alive,” Dougherty elucidated. 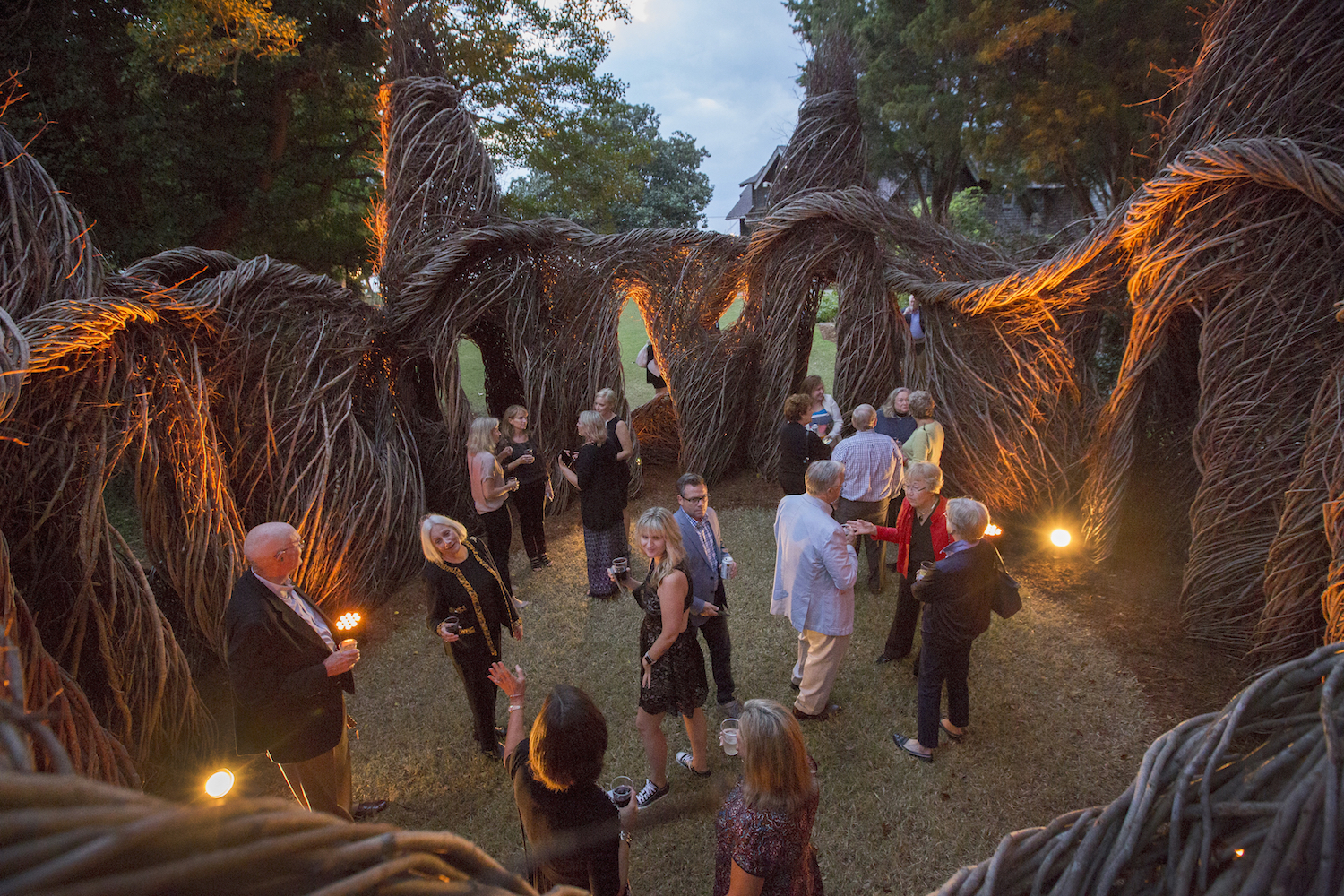 And that’s exactly how the Stickwork installations appear — alive, full of motion and movement and growth. It reminds us of something natural and also reminds us of our natural roots. Sticks, as materials, tools, playthings, are not unknown to us. It is in our association of sticks with primal memories that Dougherty’s structures hold power. “I realized early on that a good sculpture has a lot of personal associations to it,” Dougherty commented. “People may not see the drawing quality of it, but they think about a bird’s nest, or their first kiss, or environmentalism or how much the woods mean to them. So I think there’s a kind of a practicality in viewing or some kind of down-to-earth associations that lead you along and enhance the experience because you have a starting point in your own life for understanding it.”

Three weeks is the standard for creating these installations, and Dougherty with the help of his 24-year-old son Sam travel across the country and the globe building them. After those three weeks, though the Stickwork team leaves the site, the Stickwork itself stays in place for at least two years. Some climates, like the cold winters and dry summers in Vail, preserve the sticks for a longer period. “Most of the time, [the place with a Stickwork] has to take it down in the middle of the night so no one complains. People get pretty fond of them,” said Dougherty.

The Stickwork in Vail is located in Ford Park, between the Gerald R. Ford Amphitheater and Betty Ford Alpine Gardens.