Denver’s itchy-O has garnered quite a following. The masked 50-person group is known for their experiential shows that induce utter chaos — and their ability to sell out such shows now bridges from Colorado to Santa Fe. If you’ve never witnessed their act, we recommend you get caught up here. Now, for the second year in a row, itchy-O carried their set from Denver to Santa Fe, flooding Meow Wolf — a popular artist collective in New Mexico — into an anarchic portal of delightful doom. The performance group’s website claims, “itchy-o aspires to create transcendent spiritual experiences with performances that confound the senses and disorient perceptions of place, time, order, reason and categorical identity.” Yeah, they brought that to Meow Wolf.

Fans had the opportunity to explore Meow Wolf just before or during the concert if you could find the will to pull away from it. itchy-O’s experiential performances usually include masked figures lurking through the crowd, Chinese dragons and much more. When you combine that with Meow Wolf’s also immersive premise, the event is an unforgettable artistic mindfuck. And this year itchy-O expanded from one to two nights of Meow Wolf madness. Last night the grim and high-energy avant-garde itchy-O meshed with Meow Wolf’s laid-back psychedelic tropes — and they’re back for another round tonight.

As a last minute surprise show for Saturday night, Dan Deacon opened before itchy-O. That’s right — opened. Though itchy-O has quite a dedicated following, Deacon has a larger national status than the Denver group, making the announcement quite a surprise. The electro-experimental producer found a home at the Santa Fe attraction with his interactive moments that the Meow Wolf crowd fully immersed themselves into. At one point nearly the entire room participated in a synchronized interpretive dance. It felt as if the audience had suddenly teleported to a music festival, with strangers hi-fiving and hugging. The good vibes were overflowing. Normally, I find this sort of demanded crowd involvement annoying — but at Meow Wolf you bet I was swaying and sashaying.

The group began outside in the Meow Wolf parking lot with an in-the-round performance on crack. The entire band was scattered throughout the crowd — one could stand in the middle and hear the music come together from all angles. Some were quite literally surrounded by itchy-O. Percussions rang from all directions. Electronic sounds, static and fuzz blasted from amps sported as backpacks on members marching through the crowd. Adding to the immersive ambiance, the parking lot was transformed into an extension of Meow Wolf’s artistic glory — pyrotechnics shot from itchy-O totems, a Tesla machine beamed bolts of electricity and a bicyclist rode through the audience towing a trailer stacked with amps. And let’s not forget — all of the members of itchy-O are covered head to toe in black masks, gloves, helmets and more. It was sensory overload. 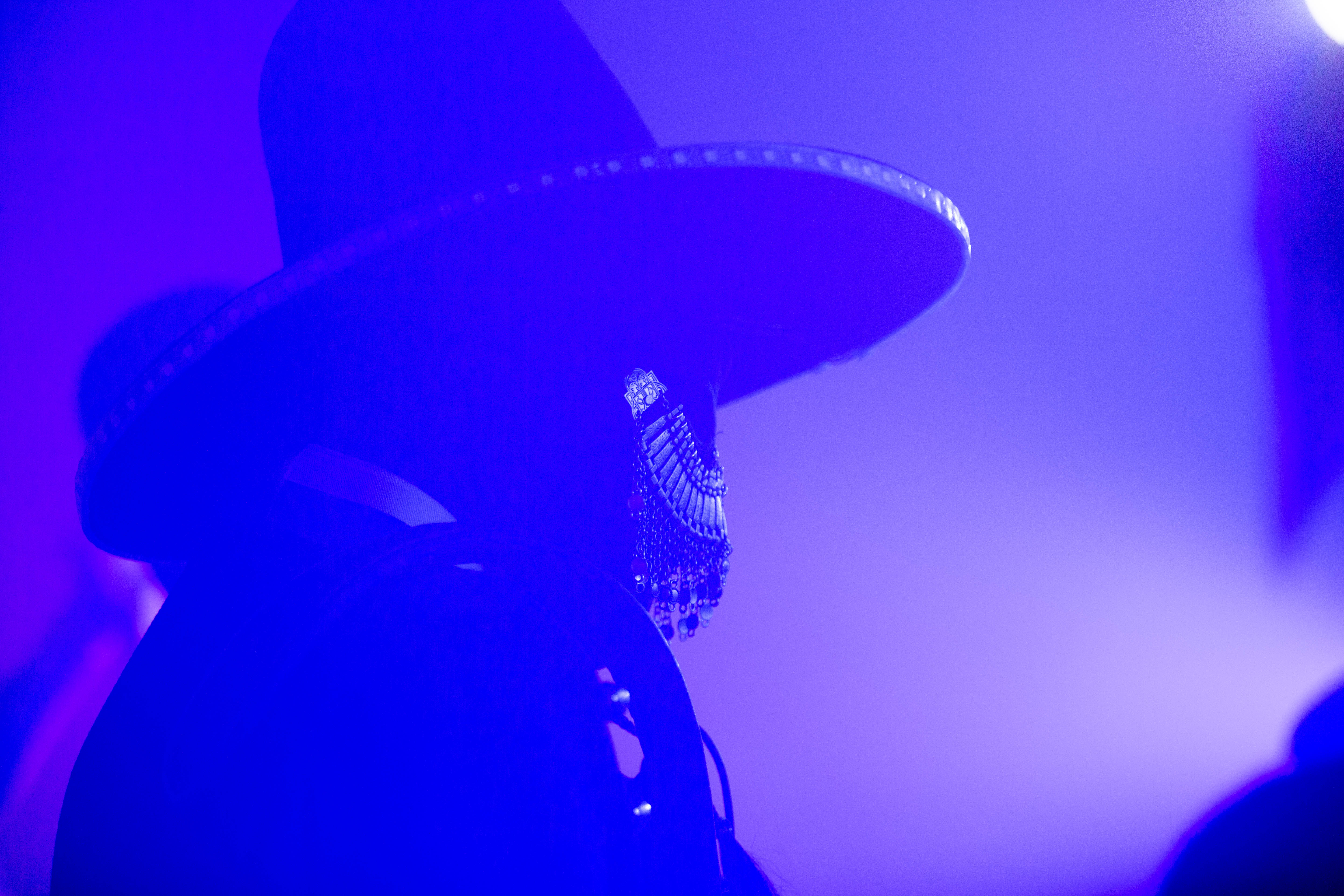 The night only got more anarchic turning the inside of Meow Wolf into something entirely new. Beginning with a march indoors, the 50-person group moved to the treehouse room of Meow Wolf. Being a sold-out show, it was crowded. The great thing about an itchy-O show, though, is that no one gave a fuck. It was like a mosh pit that’s too crowded to throw punches or dance around. Shining with only smiles, the packed audience was truly living for the moment. With members of the band sporting light-up police helmets and others flashing beams of white light and blasting smoke cannons into the crowd, it could have easily been mistaken for a riot — but a controlled one that’s self-described as sophisticatedly savage.

itchy-O tired us out but only continued to increase the scale of the production, refusing to let you stop or slow down — you’re trapped in their world and loving every moment of it. And those who lined the windowed-walls of the second floor couldn’t escape the ritualistic madness, either — band members marched through all spaces of the venue wreaking havoc. At one point I got a scalp rub from a masked figure, I was pushed over by a Chinese dragon and another itchy-O member purposefully blasted an amp into my left ear for what felt like a solid 10 minutes — and I loved every single moment of it.

As individual units, Meow Wolf and itchy-O are both examples of smart, tactical and utterly fantastic experiential entities. But when poised together, the bar is raised even higher for others attempting to amuse our — and previous generation’s — creative senses. Though the event isn’t once-in-a-lifetime, it sure feels like it — leaving you with unforgettable memories and some damn severe dehydration.

All photography of itchy-O’s 2018 Sci-Fi Freakout and by Kyle Cooper.