Meow Wolf went viral after installing their first permanent installation in Santa Fe two years ago. Now, they’ve announced plans to build their next one in Denver at I-25 and Colfax. The art collective, originally funded by a Kickstarter campaign and Game of Thrones creator George R.R. Martin, constructed a surreal landscape within an old bowling alley that has thrilled hundreds of thousands of people and given scores of artists good pay for fantastically creative work over the last few years. With the unexpected success of the Santa Fe installation, Meow Wolf set their sight on other cities that would embrace their concepts and benefit something similar, enthusiastically choosing Denver as their first expansion. 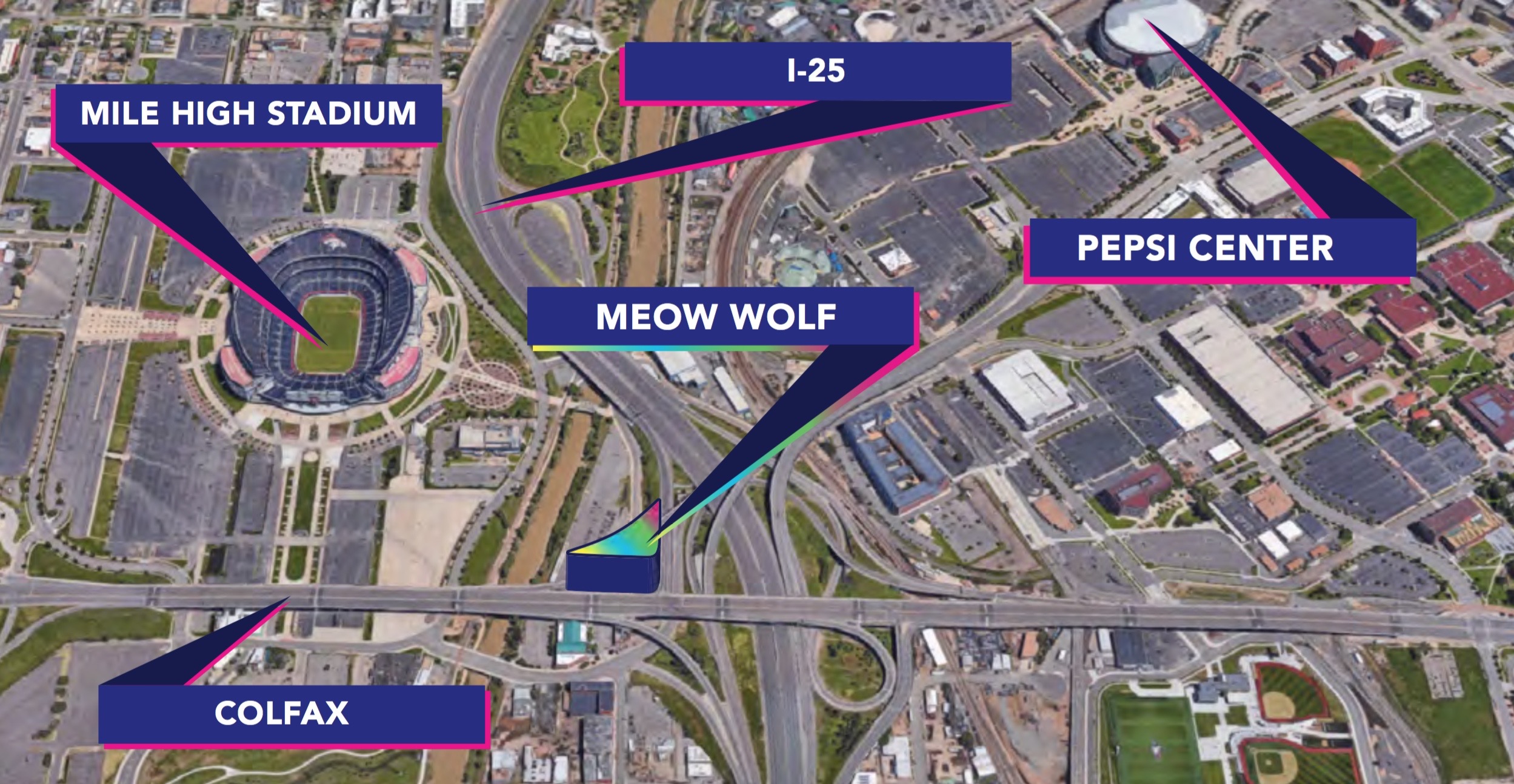 Don’t worry about not being able to find this iteration of Meow Wolf— the location they’ve secured is at a major intersection in Denver, where Colfax Avenue meets I-25 and the Platte River at 1338 First Street. Deliberation on where to locate it took several months and included contemplation of the old Denver Post building. The 90,000-square-foot complex will rise 70 feet, making it visible from the trails in Confluence Park and drivers on both intersecting roads. Revesco Properties is Denver’s development partner on this project, a real estate and investment firm specializing in underutilized urban spaces. Revesco are part owners of Elitch Gardens and were approached by Meow Wolf about investing in a permanent installation, eventually leading to Revesco employees visiting The House of Eternal Return in Santa Fe and cementing a business partnership for the future.

“This delightfully challenging site and our very strange building program are conspiring to produce a most unusual building and an incredibly unique experience,” said Anthony Guida, Design Director for Meow Wolf. “We’re thrilled to design this dynamic addition to central Denver, which will activate both the area below and above the viaducts and draw visitors throughout the whole year. Meow Wolf is highly motivated to contribute to the revitalization of the Platte River and we chose the site because it’s funky, bizarre and an opportunity for low impact urban infill. What better way to use the dynamic space between a bunch of viaducts than to build an unbelievable Meow Wolf experience?”

Plans to break ground are set for the third quarter of 2018, with a projected opening date in 2020. Because Meow Wolf fans have incessantly requested information about the next project by the art collective, there will be three “early bird” ticket specials available through their website for this Denver opening. There are 20,000 pre-sale tickets set aside for those who want to experience it in the first week it’s open, a VIP Gala event and 100 limited “superfan” lifetime passes for any and all Meow Wolf installations, worldwide. General admission ticket prices have not yet been released, though Damian Taggart, Chief Business Development Officer, commented, “we recognize the importance of keeping the experience affordable for families and for people of all walks of life to visit. The general admission prices will be comparable to other family attractions in Denver.”

Read: Why Meow Wolf is Worth the Hype, and the 6 Hour Drive

How it’s Different than Sante Fe

Santa Fe’s version of Meow Wolf is called The House of Eternal Return. Within, there is an enclosed installation with a mysterious and inter-dimensional house, a walk-in studio gallery for workshops and classes, a bar, a gift shop and restrooms. The Denver permanent installation is bound to be different because the building will be constructed specifically for the purpose of housing an unreal art project. It’s also going to be three times the size of Santa Fe’s installation, with five stories. The plans will likely remain a secret until the opening week, as part of the experience is spiking the audience’s curiosity.

Because Santa Fe has experienced such immediate and grandiose success from their permanent installation, Denver institutions have been keen on connecting with Meow Wolf. “When Denver learned of Meow Wolf’s intention to look for a location in Denver and other communities across the nation, the real estate community quickly galvanized,” said Dana Crawford of Urban Neighborhoods Inc. “Competitive negotiations began to present a series of appropriate locations for a Denver installation. Denver’s cultural contingent sensed strong competition from other cities and put out the welcome mat for Meow Wolf to understand its newfound role in Colorado.” In Santa Fe, Meow Wolf had to rely on crowdfunding sources and one very wealthy benefactor, which allowed the artistic team an extreme amount of freedom. Only time will tell if the Denver version is as extreme in its ability to push boundaries, given the vested interest by varied groups.

How it’s the Same 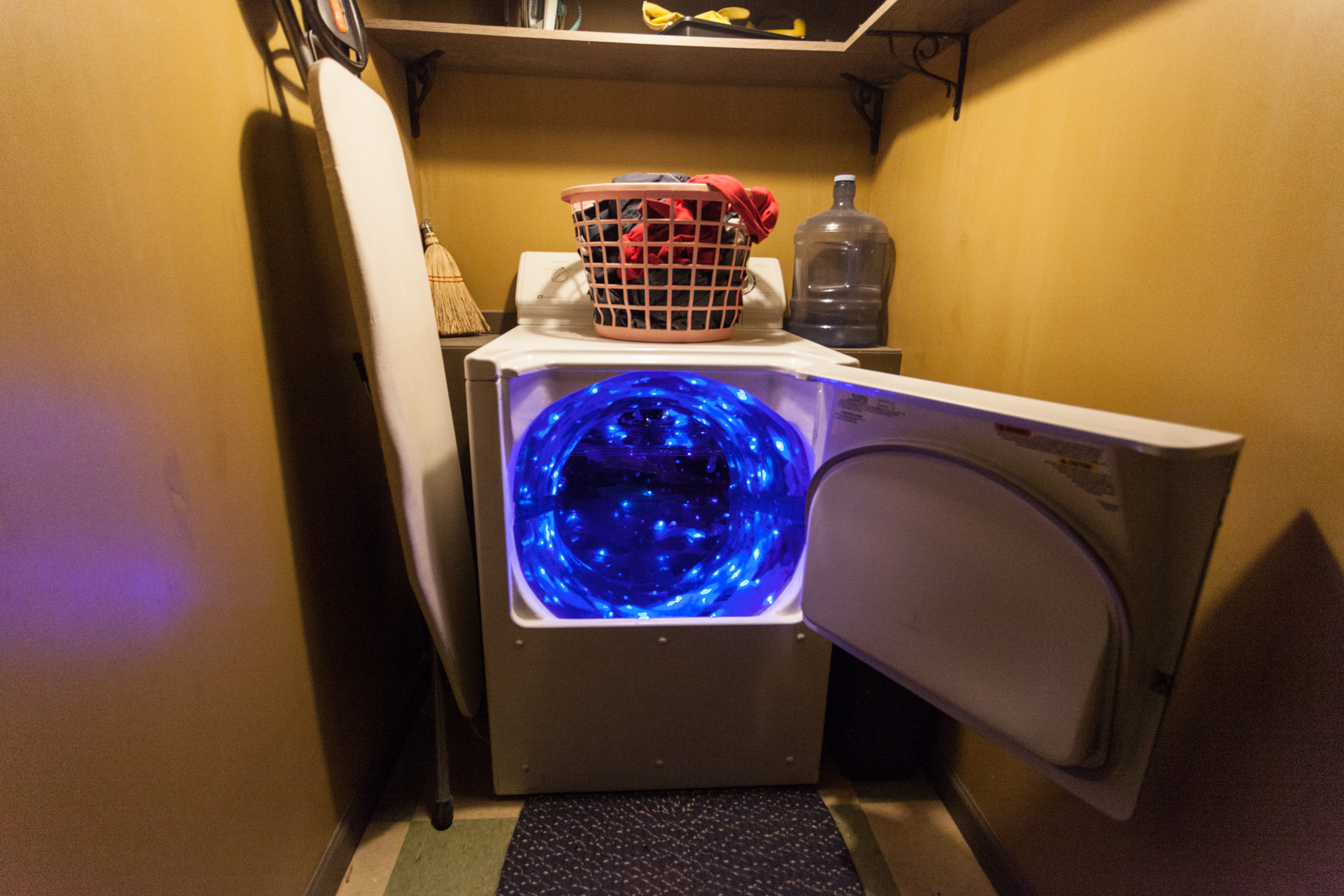 As an art collective, Meow Wolf is all about the artists. Denver’s art scene and the reception from the public is what first interested Meow Wolf’s organizers in choosing the city for this project. Santa Fe saw an impressive reception for the artists who were involved in creating that first permanent installation and have been vocal about what kind of networking and collaboration it will foster now that two cities are involved.

According to the press release announcing the Denver expansion, Meow Wolf has a “company ethos [that] embraces the long overdue recognition that accomplished artists must be compensated on an equal level with other highly-skilled, in-demand professionals and that successful businesses must give back energetically to their communities, both in terms of financial assistance but also through expertise and other forms of active support.” This kind of enthusiastic support of creative careers will likely not waver between Santa Fe and Denver.

Denver’s Meow Wolf will contain some kind of exhibition, like the house in The House of Eternal Return, and a gift shop, bar/café, lobby and restrooms. It will also share the capabilities that Santa Fe has in putting on concerts and shows, with a stage and sound system. This adds excitement to the announcement because it includes the thriving local and traveling music community in this expansive new creative project in Denver.

Why It’s Good for The Art Community 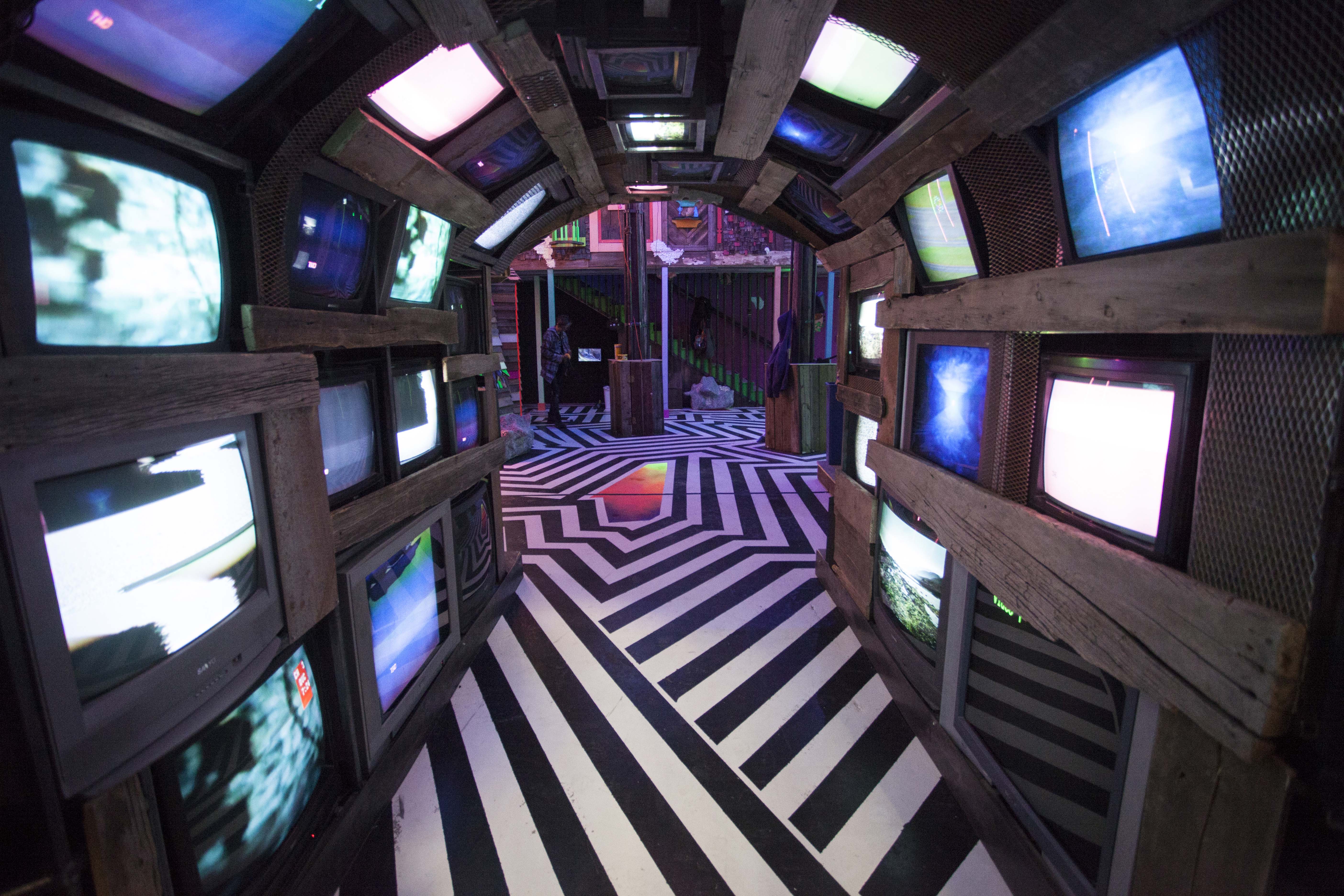 This isn’t the first time Meow Wolf has invested in the Denver art community. This past year, they sponsored CRUSH— the annual street art festival in RiNo— and the Maker Faire Denver. They’ve also donated money to artist studio spaces in Denver and nationwide, to help prevent unsafe situations and encourage creative living. Also, according to The Denver Post, Meow Wolf will likely employ around 300 people once operational and 247 proposals for Meow Wolf Denver have already been submitted by artists. Aside from investing in the Denver art community directly, the addition of this Meow Wolf installation will encourage others to invest in the art scene with more verve.

This initial group will only be a small portion of the Denverites involved in this project, however, and a call for further help will be revealed later in 2018. Artists from Denver and Santa Fe will collaborate in making another completely outrageous and completely unique experience for people to revel at, play in, be confused by, be inspired by, or simply appreciate.

Meow Wolf will be located at 1338 First Street, Denver and is set to open in 2020.  All images courtesy of Meow Wolf.