Twenty-seventeen was a stellar year for Greensky Bluegrass. The band is now bigger than ever, selling out Red Rocks (even in the pouring rain), sharing the stage with some of the industry’s biggest names and playing at some of the most prestigious festivals in the country. Greensky Bluegrass will now be playing three sold-out hometown shows at the Ogden Theatre on January 11, 12 and 13 before taking off on a whirlwind tour that will span from Memphis and Washington D.C. to New York and Detroit. But fear not faithful Greensky fans — they’ll be back in Colorado to headline WinterWonderGrass in Steamboat Springs on Saturday, February 24. You can keep track of Greensky Bluegrass’ full tour schedule here.

Greensky’s dobro player Anders Beck took some time to talk to 303 Magazine about 2017 and all of its glorious highs — of which, there are many — plus a couple of embarrassing moments to keep it humble. Read on to find out which of Greensky’s 2017 shows played were amongst Anders’ favorite, the musical collaborations that stood out the most and which festivals were the most fun and why. 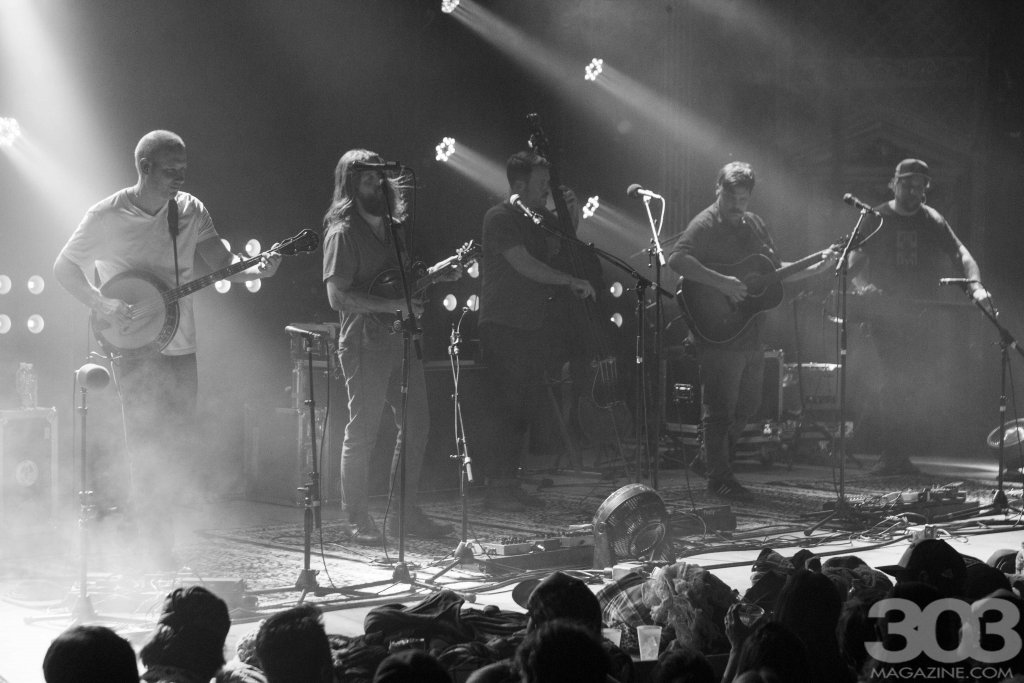 Anders Beck (AB): There were a lot of cool shows, and the obvious answer would be Red Rocks. This year it was pouring rain and really cold, but it was sold out months in advance — which was amazing for us. But everyone showed up! From our perspective, it’s amazing that everyone shows up in 35-degree rain to see our band, it’s a trip. It’s a complete mind fuck that people love what we do so much. That sticks in my memory really strongly.

AB: I think my favorite sit-in of the year was at Susquehanna Breakdown, which is a cool little festival in Pennsylvania. Tom Hamilton, who plays with Joe Russo’s Almost Dead and American Babies, has toured with us a bunch, and he came and sat in with us for “Ain’t No Bread in the Breadbox.” We’re musical buds and when we jam together, we’ve got all the same influences. For better or worse, during that particular version of that song, Tom just came out swinging. I remember never wanting it end, and it barely did.

AB: It depends on the day. I like to cover our friend’s music a lot. You can always play Pink Floyd or whatever, but when you can play a song people don’t always know, that’s cool to me. We play a song by Raylan Baxter called “Yellow Eyes.” He’s a great songwriter and righteous dude, and every time we play it, it just flattens me. I’m on the inside looking out, so it’s hard to say but I’m also a fan of what we do. When we play that song, I feel more like a fly on the wall than someone in the band. It’s just so beautiful.

303: What was your biggest regret/missed opportunity?

AB: We’re lucky as can be. That’s a hard question, because everything’s going so well. We’re incredibly blessed to be where we’re at.

303: Favorite festival played and why?

AB: I’m a little biased because we just got back from Strings & Sol in Mexico. First of all, it’s December on the planet (laughs), and we all go down to Riviera Maya in Mexico. It’s us and the Infamous String Dusters, Yonder Mountain String Band, Leftover Salmon, Fruition (who are all my best friends) and we all play multiple sets of music literally on the beach, on the ocean for all the super fans. The crowd is all of those band’s biggest fans from all over the country coming to Mexico for a vacation, and we all just do it together. It’s truly one of the best times available to humans. It’s really special and relatively small. You’ve got that sort of a Jam Cruise mentality, where the line between fans and bands is totally blurred. You’re all in it together and it’s not weird. There’s no backstage, really. You’re all just hanging out on the beach.

AB: Joe Russo’s Almost Dead at Red Rocks. That show, in particular, was so inventive with music everyone has such reverence for. They treat the music so playfully while maintaining reverence with reckless, wild abandon with which they play the music. It’s what you’re looking for in a musician and in a band. There are enough tributes, but what they’re doing is taking things and flipping them on their ass. The joy that comes off of the stage, I just love it.

Also, Derek Trucks Band both nights at Red Rocks. He’s one of the most amazing musicians on the planet. The amount of soul that comes out of his pinky finger is unbelievable. The amount of emotion that he plays through a guitar is powerful.

AB: Disclaimer — this didn’t happen during 2017, but it’s an amazing story. We were doing this thing called “Dear Jerry” at Merriweather Post Pavilion and everybody was there. It was a Jerry Garcia tribute, so all the Dead guys, Widespread Panic, Jimmy Cliff, Allen Toussaint and just tons of bands. We were supposed to play a Jerry tune and we got this killer time slot right at the end of the show, which is amazing because the show opened with Phil Lesh. Everyone’s playing their favorite Jerry songs. And, in hindsight, it’s ridiculous to imagine that the tribute to the most iconic jam band legend in the world would go off schedule, which no one realized until it did.

We had sound checked and had been hanging out with Bill Kreutzman all day, just having a great time. When we were about to go on stage — and it’s all very scripted and timed out — we get up to the side of the stage, we’re super excited to play. It was going to be our first time covering “Eyes of the World.” The event is totally sold out. I see Bob Weir walking up with his guitar as we’re about to go on stage, and he’s like “Excuse me,” so I step out of his way. And I’m like “Where the fuck is he going?” Then we realized that our set, because of all the time constraints, just got totally cut.

You want to talk about awkward and embarrassing? Everyone was super apologetic. I get it — it’s fucking Bob Weir. I respect the fact that he should probably play instead of us. I’ll never forget “Right this way Mr. Weir.” I think I actually flipped a table in a green room for the first time ever. Everyone played “Ripple” together as the encore and I protested. I just stood on the side of the stage and watched. It was terrible and an accident, but hilarious in hindsight. To think that a tribute to Jerry with thirty bands would ever be on time. Ha! We were sitting in the hotel room that night like, “What the fuck just happened?” 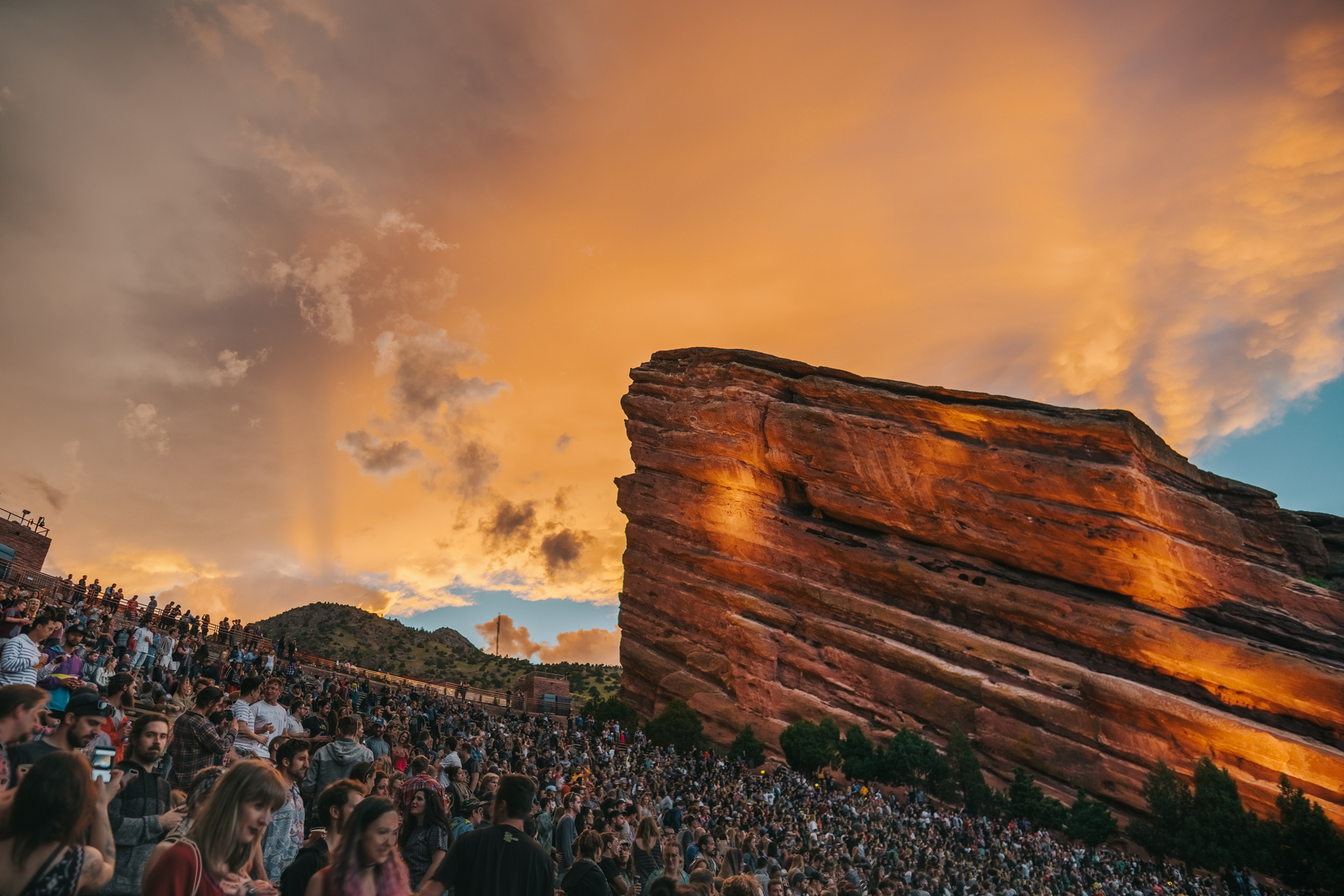 303: Favorite venue to play in Colorado and why?

AB: This is becoming a Red Rocks interview — it’s literally one of the coolest venues in the world. At the time, I was kind of bullshitting myself. I saw Phish for four nights there in 1996 and was like I want to do that. And somehow, I get to now! Every time you step on that stage, it’s one of the best, most powerful things.

Beyond that, I love the Ogden Theater. It’s really live. It’s just a lot of energy for me — a lot of energy transfer between the people onstage and the people in the audience. It just bounces back and forth. That’s my favorite place in Denver. We just sat in with The Wood Brothers there, and I hadn’t played there in about a year. Just sitting in with them for one song got me physically excited for our upcoming Ogden shows. I also love Cervantes’. I’ve been playing there since I was a wee lad. I sort of grew up at the same time as Cervantes’, on some level. With that place, it’s really going off. The vibe in there can be really big.

303: What are you most looking forward to in 2018? What’s on the horizon for Greensky Bluegrass?

AB: Lots of things that I know about that no one else is allowed to know about yet — but it’s some exciting stuff. It’s all so good that I wish could tell you, but I can’t.

303: What’s your New Year’s resolution and the likelihood of keeping it?

AB: 1. Make a New Year’s resolution. (laughs) Realistically, I’ve been thinking a lot about relationships and people. I’ve got a lot of great friends that I hardly talk to, but they’re still great friends. Some of my best friends tour all the time and a lot of us are in bands. We see each other every couple months, but you know, the idea of kind of working to be better friends with people that I’m friends with. If you’re thinking about someone, you should call them and tell them you’re thinking about them. I don’t do that enough. You don’t really know how long life is going be. When you’re looking back on it, if anything, life is about the people and your relationships and connections with them. So, my resolution is to dig deeper. I hope to do better with that next year.