Review – Fans got Wet for Glass Animals at Red Rocks

Little Dragon fans got lucky at Red Rocks last night, as they got to experience a full, relatively dry, set while Glass Animals was only able to play five songs to a sold-out crowd before the lightning, thunder and pouring rain forced the show to take a 30-minute break. At 7:30 p.m. sharp, Little Dragon walked starry-eyed onto the Red Rocks stage and waved to the audience before starting their hour-long performance. What resulted was just as much of a contemporary art performance as it was a music set. Yukimi Nagano, the main singer and only woman of the Swedish group, graced the stage in a tight neon-yellow dress underneath layers of white chiffon with black lining. On her head sat a black pope-like hat with another layer of transparent white chiffon over the entire ensemble – a contemporary angel. 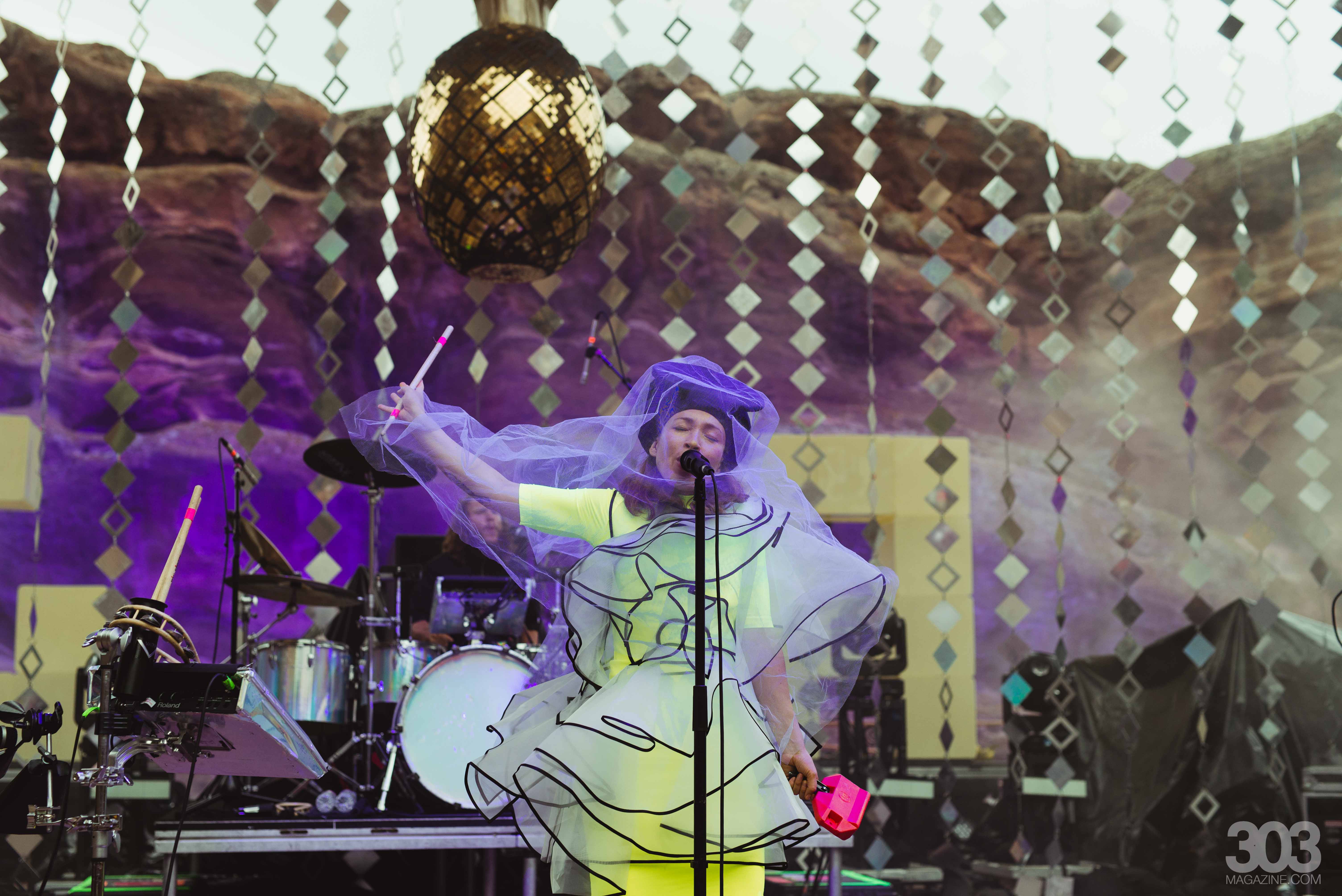 “We’re so happy to be with you guys tonight,” she announced after the first song. Besides vocals, Nagano played an orange cowbell, switching to a tambourine after their third song, “Sweet” off of their new album Season High. “I’m feeling pretty high just looking at you all. Who’s high right now?” she asked. The crowd erupted into screams of agreement. Half way through the set, the light drizzle picked up to a steady rain. At this point, concert goers either popped their raincoat hoods or embraced the rain as a new accessory to compliment their glittery faces and crop tops.

The second half of the set was devoted to some of their more popular songs –”Ritual Union,” “Feather” and “Klapp Klapp.” At one point, Nagano vanished from the stage. She reappeared moments later, this time wearing a neon-orange piece of chiffon over her entire outfit. From 50 rows back she resembled a flaming Cheeto – one that could give you answers about existential life questions. 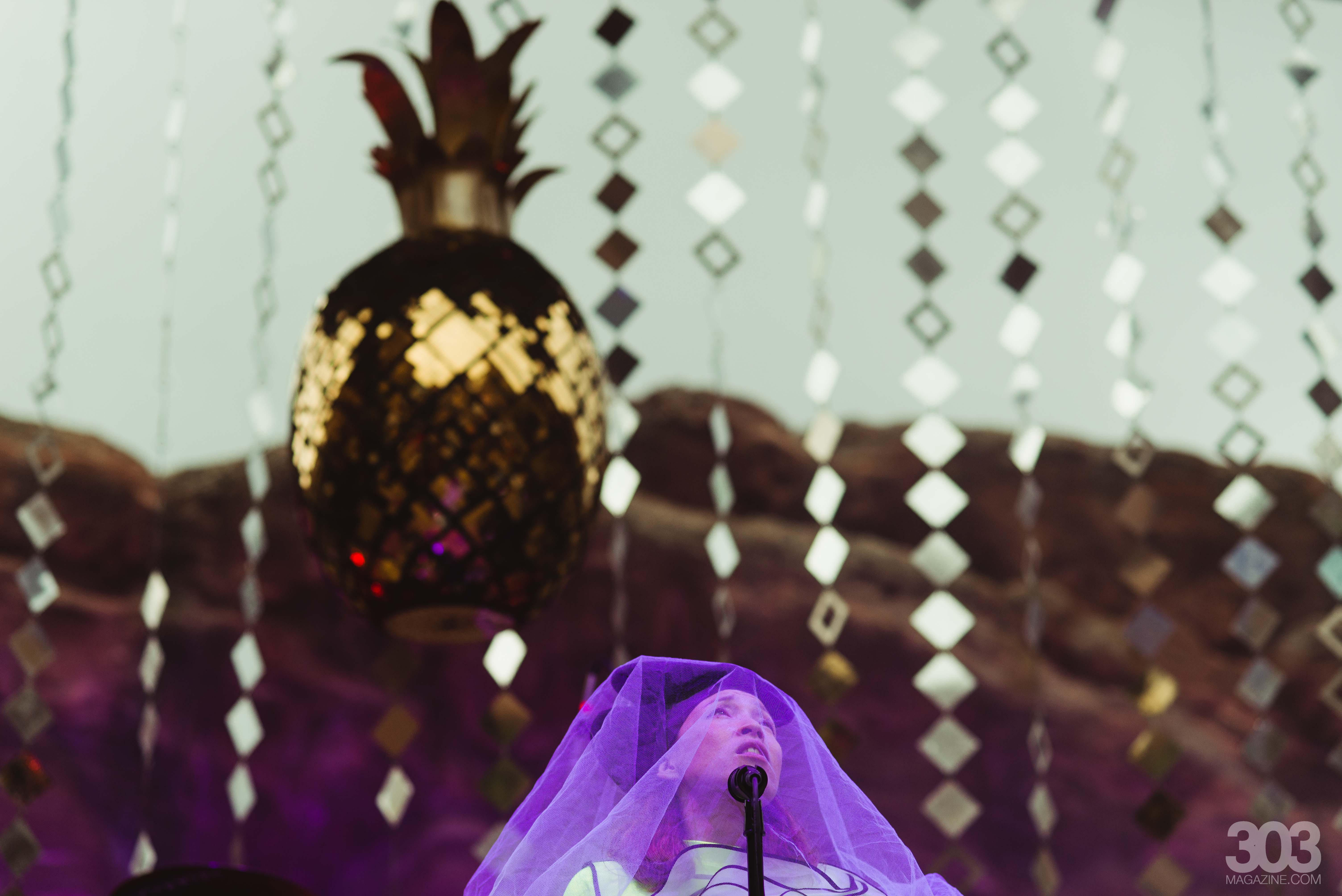 The performance continued when the four Englishmen of Glass Animals paraded out to an eager crowd after a 30-minute stage transition. With the eye of the storm in sight, the band didn’t waste any time getting to their performance. The first jungle drum beats of “Life Itself” set the crowd into a fury of elation. As the rain poured onto the Red Rocks venue, fans danced harder as the stage crew began packing up the Glass Animals set around them. The lead singer and face of the band, Dave Bayley, continued to rile up the fans. “I’m getting some serious UK festival vibes with this rain,” he admitted. “I love playing in the rain – brings people together. Let’s all get soaking wet.” Next, the band played the crowd pleasers “Black Mambo” and “Poplar St” to the drenched, dancing fans. The stage was dressed with a television set the size of a refrigerator, equally large “G” and “A” light-up letters, and a hanging gold pineapple-shaped disco ball. With the start of “The Other Side of Paradise” around 9:20 p.m., the storm over Red Rocks was in full throttle. Lightning struck just behind Ship Rock right as the chorus hit –”Bye bye baby blues, I wish you could see the wicked truth, Caught up in a rush it’s killing you.”

At this point, it was obvious that the performance would take a hiatus. Some fans (wanting to protect their electronic devices) ran to take cover from the storm, while others danced and sang until the end of the song when Bayley announced that the band would take a break for the storm to pass. Dedicated fans poured into the Visitor’s Center and Hall of Fame building beneath the amphitheater, while logical fans made their way to their cars to leave. 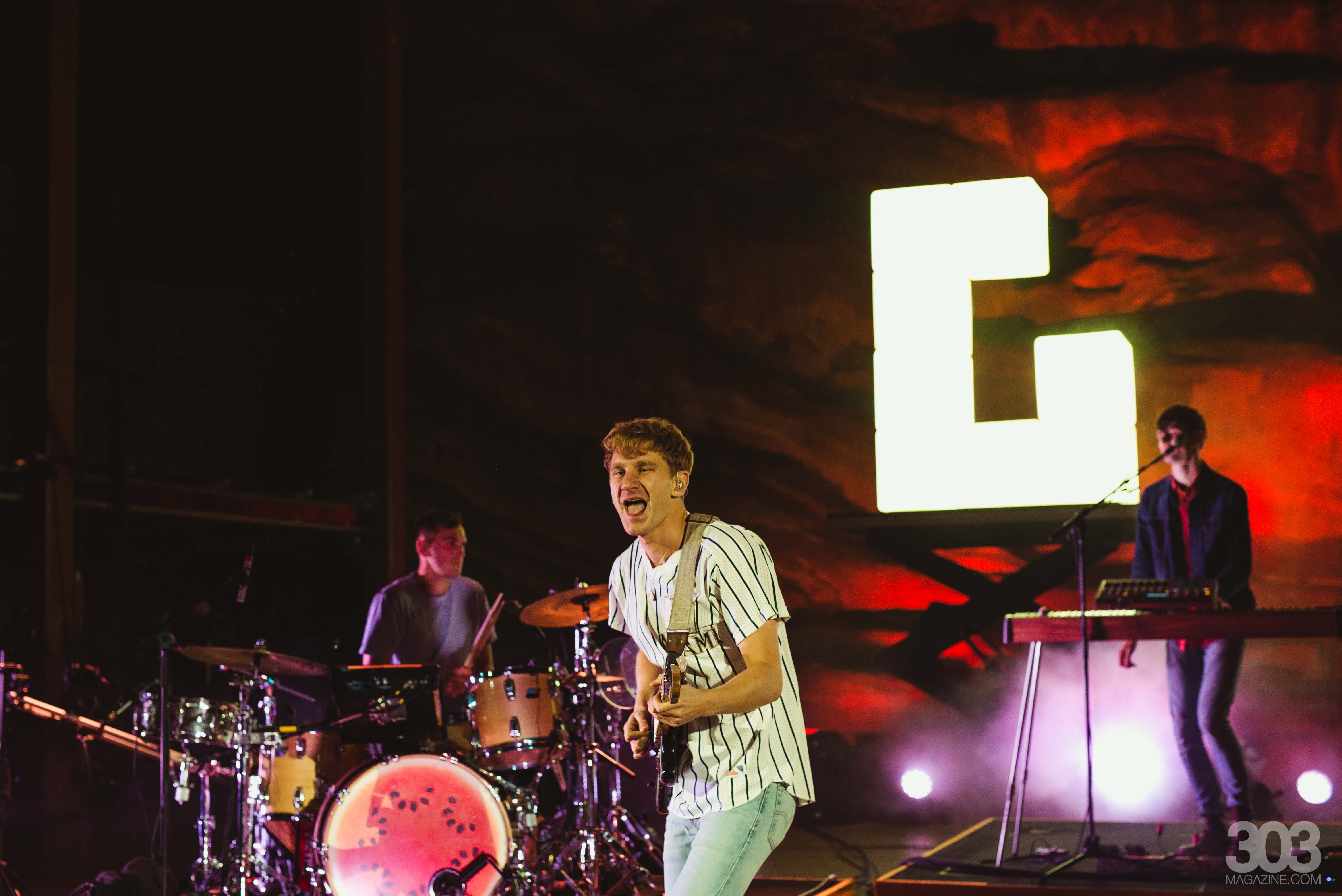 Fortunately, after a 30-minute storm delay, Red Rocks announced via Facebook that the show would resume. Glass Animals finished their set with lively performances of “Youth,” “Gooey” and “Agnes.” Before performing “Pork Soda,” Bayley closed the show by saying, “This was definitely some of the funnest shit I’ve ever done in my life. Let’s dance again in the rain sometime. Thank you so much for sticking with it.”