Cider has been experiencing exponential growth over the past several years and doing so with distinctly American ingredients and flavors compared to its more mature brethren in Europe. Denver may be in the nascent stages of its cider culture compared to its big brother in beer, but three cideries are within the city limits, all producing a wide range of portfolios. It remains to be seen whether cider culture will eclipse or even equal the popularity it had during the time of Adams and Franklin in the early 1800s. Other distinctly American beverages like Bourbon have grown as a result of their ties to history, making a solid case for the potential staying power of cider.

American cider is oftentimes compared as sweeter than their continental counterparts, but the starkest difference comes in the form of funk. “I think there is terroir in cider just as there is with wine,” said Jordan Burghardt, assistant general manager and curator of the cider program at Boulder’s Arcana. “The way they do it in Basque country [an area of Spain bordering France along the Atlantic coast] is they just press the apples, skins, seeds, stems, everything. The natural yeast from the skins of the apples is what ferments it.” This natural fermentation gives traditional ciders an earthy funk, whereas American ciders are going to be much cleaner and fresh tasting, highlighting their natural apple flavors. 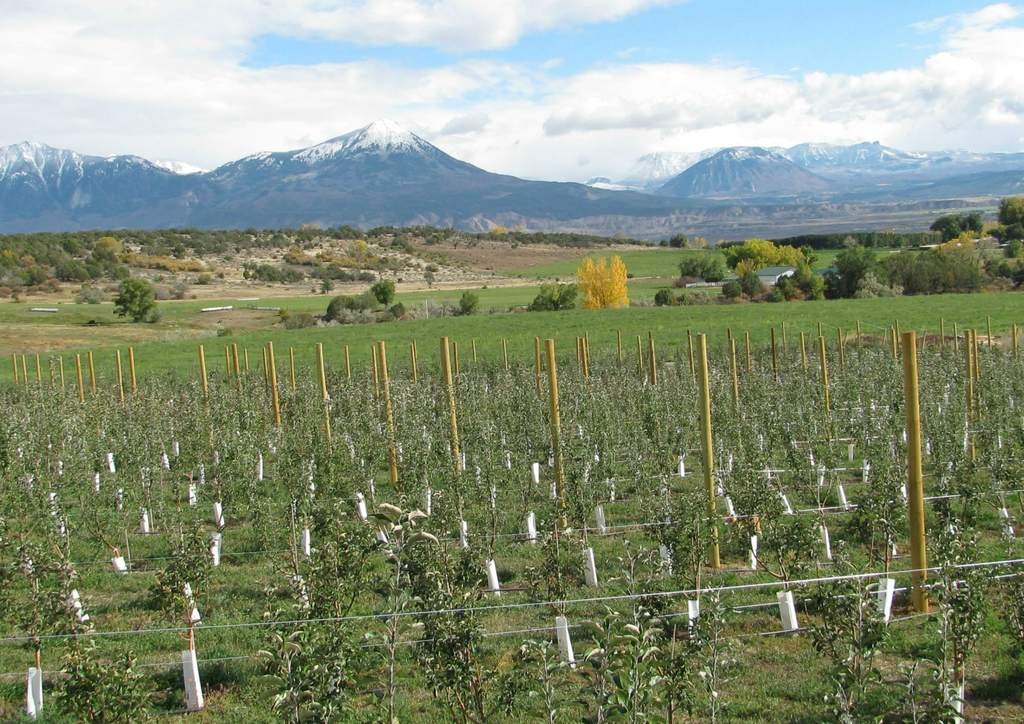 Denver’s oldest currently operating cidery is Colorado Cider Company. Since 2011, Colorado Cider has been producing a variety of ciders, with their flagship being Glider Cider. Glider, as well as the rest of their offerings, has a crisp, dry finish compared to many of the mass-market American ciders available. Glider Cider Dry is, not surprisingly, much drier and drinks like a brut champagne. This cider pairs well with most foods, is still light in body despite being 6.5% alcohol and has a wisp of apple aroma and flavor. With a nod to Colorado’s favorite plant, Grasshop-ah is a hop-infused cider. Lemon and citrus flavors are evident in both the aroma and flavor, with some bitter, grassy notes to balance the sweetness. 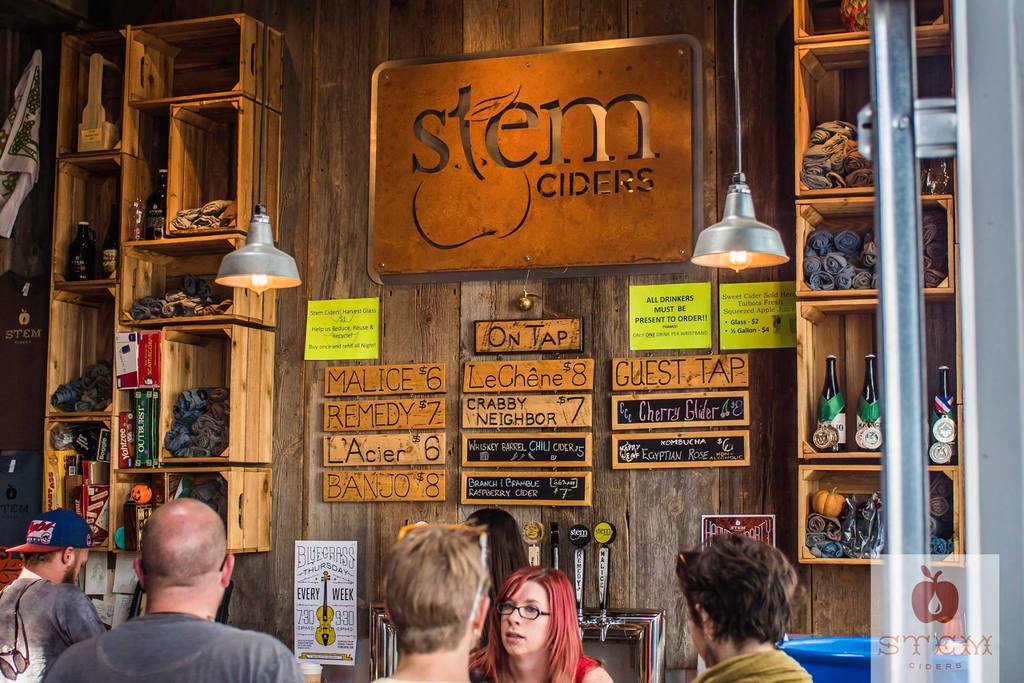 It’s hard to go into Stem Ciders and not order a flight of their full lineup. Most of Stem’s ciders have a similar flavor profile, with subtle but noticeable nuances that make one want to continually compare and contrast each taste. “We use single strain juice which is basically fresh pressed cold pressed juice,” said co-founder and CEO Eric Foster. “We bring in juice from Michigan, we bring in juice from Washington and Oregon,” said Foster. “It pretty much always has galas, golden delicious, some red delicious, and granny smith,” he continued. Some of these varieties may sound familiar, and that’s because to American consumers, they are. Rather than using traditional cider apples, Stem utilizes fruits cultivated for eating, referred to as culinary apples. “We use culinary fruit for the most part as opposed to cider fruit just because that’s what we have to work with here in the United States and we try to showcase that in our products. They are a bit more acidic than our English or French counterparts, so they are quite tart,” said Foster. This makes some of Stem’s ciders seem more balanced towards acidic than their competitors, but according to Foster that’s what they like and what they strive for in order to highlight the more quintessential American apple varieties.

We’re doing a great job in the US right now of developing great wine, which takes patience. So I think that cider producers could take a page out of that book. – Eliot Toan

This acidity comes through as green apple flavors, especially in one of their year-round ciders, Malice. Malice is dry and clean with an acidic bite. On the other end of the spectrum is Branch & Bramble, a raspberry-flavored cider. Although slightly sweeter, it’s balanced by bitter, tannic flavors from the raspberry skins and finishes with a crispness like biting into a fresh berry.

“We do push the envelope with [new styles] of ciders, but we would say that we make, at least that we are inspired by, new American style ciders,” said Foster. This is evidenced in the Red Zinfandel barrel-aged Le Chêne. The cider is dramatically different than their other core brands, with a full mouthfeel and body and flavors of butterscotch and warm caramel. To compare the impacts of barrel-aging on Le Chêne, try its stainless steel-aged cousin L’Acier. Like Stem’s other core brands, it has a green apple nose and flavor and is quite tart and acidic, leaning more towards traditional ciders with a tannic finish. Stem will also begin a series of one-off experimental ciders served in firkins (small casks) every Monday starting June 6. As Foster said, “they could be good or bad,” but they’re mostly meant to be test batches with the taproom and customers acting as the deciding factors for future releases. 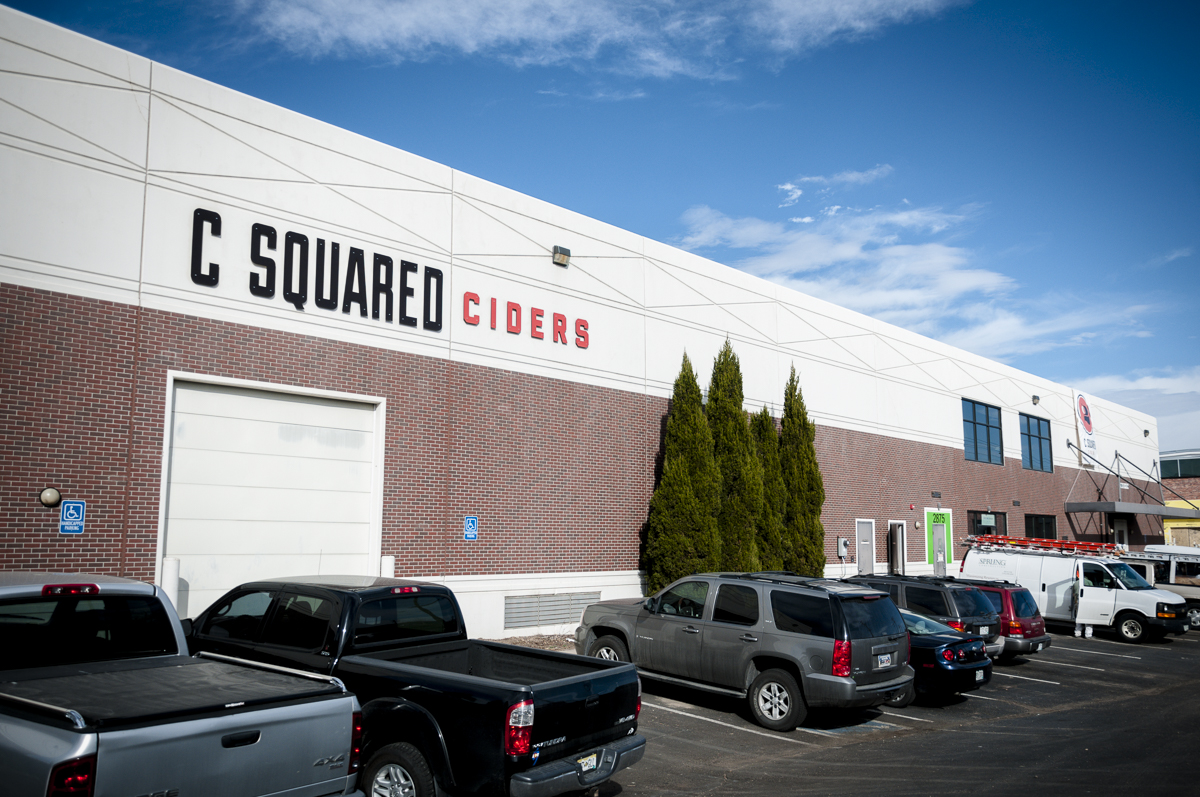 The newest of Denver’s cider producers is C Squared. Experimentation and a range of apple and spice flavor pairings are at the core of C Squared. C Squared’s ciders finish slightly sweeter than their Denver counterparts, but are also more boldly flavored and not back-sweetened (the addition of sugar or apple juice post-fermentation). Nona, described by C Squared as “off-dry”, has big, green apple flavors and tartness like a jolly rancher candy. Crisp, fresh apple flavors develop as it warms. Alma, defined by C Squared as a “semi-sweet” cider, is more full-bodied with candied apple flavors, but is balanced with a higher perception of effervescence.

What really sets C Squared apart though, is their series of herbal and spiced ciders. Ginger, Ella and Lila are flavored with ginger root, hops and herbs, respectively. The additions are noticeable but not overpowering. Owners Charles Brown and Chad Hatlestad put their brewing roots to good use, dry-hopping Ella with Ella and Azacca hops for a tropical fruit aroma and slightly herbal finish. There’s only a hint of bitterness, but floral and fruity notes are more evident. Lila is spiced with lavender, honey, blue juniper and rose hips for a big, floral aroma, yet delicate floral flavor. It has a dry finish and is the most elegant of the trio. Seasonal offerings extend the experimental nature of C Squared with their “Immortal Series”, ranging from barrel-aged “Ruby” to “Rita”, a chile and pineapple cider. Despite a range of radical ciders C Squared intends on producing more traditional libations this coming fall with their “Sailor Series”. The ciders will be inspired by traditional European varieties from England, France and Spain, including wild yeast strain fermented offerings and more wood-aged ciders. 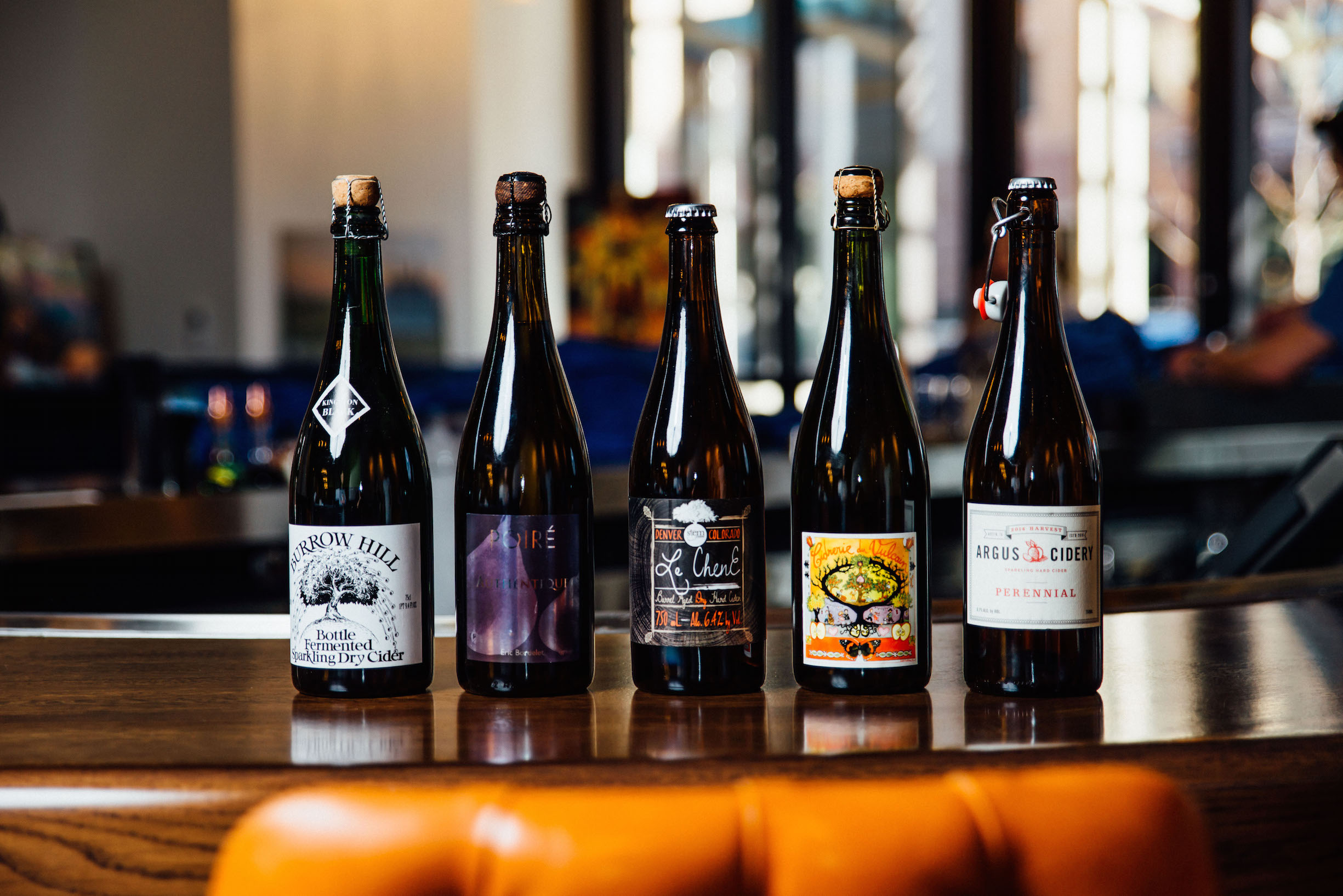 Some of the ciders available at Arcana. Photo by Noah Berg.

Elliot Toan, the owner of cider-centric restaurant, Arcana, says the American cider culture could learn a lot from some of the older cideries in Europe. “In America, we always want to rush to something, whereas what we can learn from the Old World is things like single-varietal ciders, and also aged ciders,” said Toan. Colorado Cider is doing both, with the single-varietal Newtown Pippin, and the barrel-aged Ol’ Stumpy. Newtown Pippin is an American heirloom apple originating from New York, which, according to Colorado Cider’s website, “has a distinct fruity, some say pineapple aroma,” and “minimal sweetness.” Ol’ Stumpy is made with a blend of American heirloom apples and traditional cider apples (with varieties in the bittersweet and bittersharp categories). After fermentation, they are aged in oak and then cellared for a year before blending. Ol’ Stumpy has a white wine tang reminiscent of Pinot Grigio, and finishes dry. Ultimately, Colorado Cider resembles what a modern American cidery company can aspire to. Their offerings are similar in style to dry European ciders, but with a distinct American flair of creativity.

Cider is unique in that it sits in a middle-ground between wine and beer. As evidenced by C Squared, many American cider producers are former brewers and are employing innovative methods to come up with unique styles. However, production and flavors are more akin to winemaking. “We are seeing a lot of promiscuity in our consumers, so we pull from craft beer, we pull a little bit from spirits, we pull from wine and I think where we pull people really depends on the variety of ciders that we are offering,” said Eric Foster of Stem Ciders. For that reason, cider is still maturing as a market trying to find its place in the world of alcoholic beverages. Referring to European cider culture, “they have decades of, and even hundreds of years of cider production that has led to these very specific and very dialed-in ciders that have a very specific personality and point-of-view,” elaborated Elliot Toan of Arcana.

Both Toan and Foster would agree that cider is truly an American beverage despite its decades-long drought in the US following prohibition. “It really is our heritage,” said Toan. “We’re doing a great job in the US right now of developing great wine, which takes patience. So I think that cider producers could take a page out of that book.” If cider makers are able to ride the current tide, then perhaps America’s original favorite fermented beverage will make a permanent rebound. As Foster echoes, “you can’t have anything more American than cider.”