From Flour to Table – The Painstaking Process of Grateful Bread

It’s late morning in the Grateful Bread warehouse, and Jeff Cleary—founder and head baker—supervises a team of five bakers intently focused on their final duties of the day. Hands never stopping, they scrape dough from a floured table, work, roll, and form the pieces into country dough loaves. And in just a couple hours, the baked dough will be served as table bread for some of Denver’s finest restaurants.

Housed in an 8,000 square-foot, unassuming industrial complex off Colfax in Golden, Colorado, the bakery is small—at least in comparison to the sheer volume that the crew produces. Roughly 70 hotels and restaurants are serviced daily. The team goes through about 15,000 pounds of flour each week, which amounts to roughly 2,500 pounds per day. That’s over 2,000 hamburger buns per day for the Park Burger family alone. And today’s daily production list is three pages long, with modifications filling an additional four pages.

While this output is impressive, the fact that each loaf is made by hand is staggering. But for Cleary, this attention to craft is only natural. He’s been doing it for a decade. 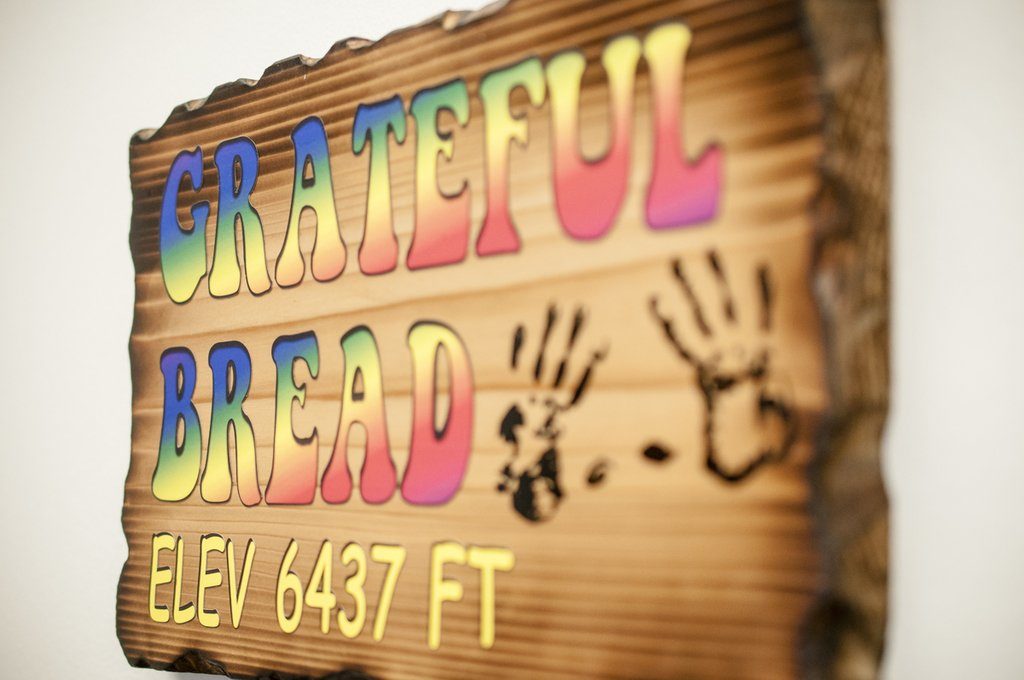 The Grateful Bread story is an account of disappointment, luck, and hard work—but it’s equal parts detail, obsession, and philosophy. The bakery’s history can be traced to 2002, when Cleary and his wife Kathy Mullen opened Intrigue in a refurbished garage. The restaurant made every dish from scratch and cooked everything to order. While this concept would have aligned perfectly with Denver circa 2015, things were a bit different back then. Following the March 2003 invasion of Iraq, and the staggering stock market downturn that peaked at the same time, Cleary and Mullen could not compete in a stagnant market, and sold Intrigue in 2005. “I sold everything off, and part of one of the deals was to take my bakery equipment out of [Intrigue]. So I went to a cabin in Evergreen,” he said.

“We only try to work with the best chefs,” Cleary explained. “We’re pretty selective of who we take on in general. We’ve had a waiting list for a while and we’ve been slowly adding to it.

Cleary began operations in this 400-square-foot cabin. With only one baking table, one 20-quart mixer, and an old six-tray oven, he started baking for friends and connections from his kitchen days, including Frank Bonanno, Alex Seidel, and Scott Parker. In the beginning, it was just Cleary. He did all the baking, all the shaping, all the mixing, all the deliveries, and all the billing. He remembers the days when he would wake up at 11 p.m., work through the night until the next evening, go home—eat something, drink a few beers—sleep a few hours, and do it all over again. As the story goes, Cleary only took four days off in all of 2006. Although he eventually received help from a baker, a driver, and Mullen, Cleary never compromised quality.

By 2008, Grateful Bread had enough demand for a proper space, and moved to Golden with the same skeleton staff. While the company’s production has grown exponentially, the staff has only increased to 18 bakers. Still, Cleary insists on making every single loaf by hand, even if it means high labor costs. “We could be much bigger,” said Cleary. “We looked at the numbers last year…and we turned 95 percent of the people away who called us.”

How does the bakery choose its clients? Simple. “We only try to work with the best chefs,” Cleary explained. “We’re pretty selective of who we take on in general. We’ve had a waiting list for a while and we’ve been slowly adding to it.” Existing clients, chefs, and restaurateurs opening up new endeavors generally get first priority. Sometimes it comes down to logistics (they just started delivering to Boulder). But much like his own endeavors, quality is Grateful Bread’s first concern. 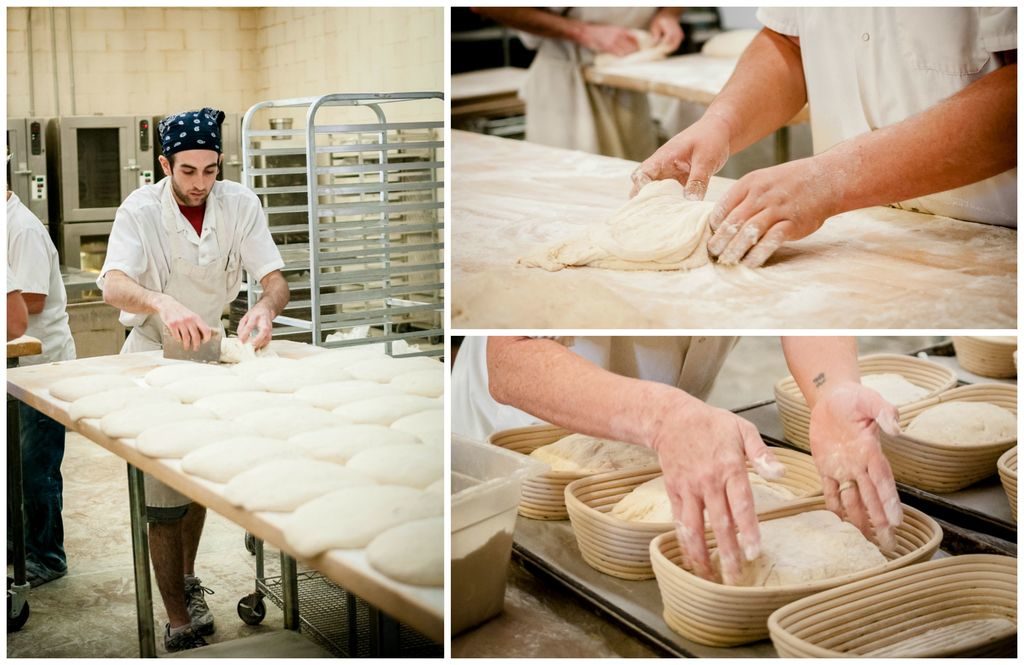 Given Cleary’s hand-shaped, hand-rolled philosophy, it’s safe to say that Grateful Bread is driven by the craft of baking. To eliminate waste, keep costs at a minimum, and ensure quality output, the bakery is as methodical as it is cyclical—as it can take days for loaves to be perfected. Due to the attention that handmade dough requires, it is necessary for bakers to be on site at all times.

The systematic team operates on two shifts: the overnight shift starts at 11:30 p.m. and wraps up around lunch the next day; the morning shift begins around 10 a.m. and works through the night, until the rotation is repeated. At any given time, there is dough ready to be baked. As one shift clocks out, the other begins work on the same dough that was fermented, mixed, and formed hours—or sometimes days—before.

To help illustrate this cycle, Cleary explains the process in detail. He says that ciabatta bread’s journey from flour to table begins as biga, a four-flour starter that is autolysed for 24 to 48 hours. Each afternoon, the morning shift weighs out flour for loaves that will be mixed later that evening. Between 8 and 9 p.m., temperatures are taken, and numbers are crunched. Formulas are used to calculate exact measurements and water temperatures needed for each mix. Because baking relies so heavily on these variables, Cleary’s team must painstakingly track each step of the process. “I know the mill date of the flours, I know who did the weigh out, I know who did the mixing, I know what time it was done, I know the temperature of the water,” said Cleary. “This is done for every piece of dough.”

Once the formulas are finalized, the remaining ingredients—biga, yeast, and salt—are added. The dough is then mixed for 40 minutes and bulk-fermented for six hours. Around 1:30 a.m., the dough is cut into shapes, and then placed on a floured table to bench rest for an hour. Finally, the loaves are baked: smaller cuts bake as quickly as 25 minutes, while larger cuts can take up to an hour.

In the adjoining room, the delivery team is just as precise. Because there are no preservatives in the bread, everything needs to be packaged immediately. On average, the bakery sends out five trucks a day. All deliveries are staggered out. Everything is timed so no orders are waiting: as fresh bread comes out, it is bagged, loaded, and immediately sent out for delivery. Following deliveries, the drivers return to the warehouse, unload, and start slicing bread—all while the next batch is baking. “[The drivers] are literally waiting for the bread to come out of the oven,” Cleary says. 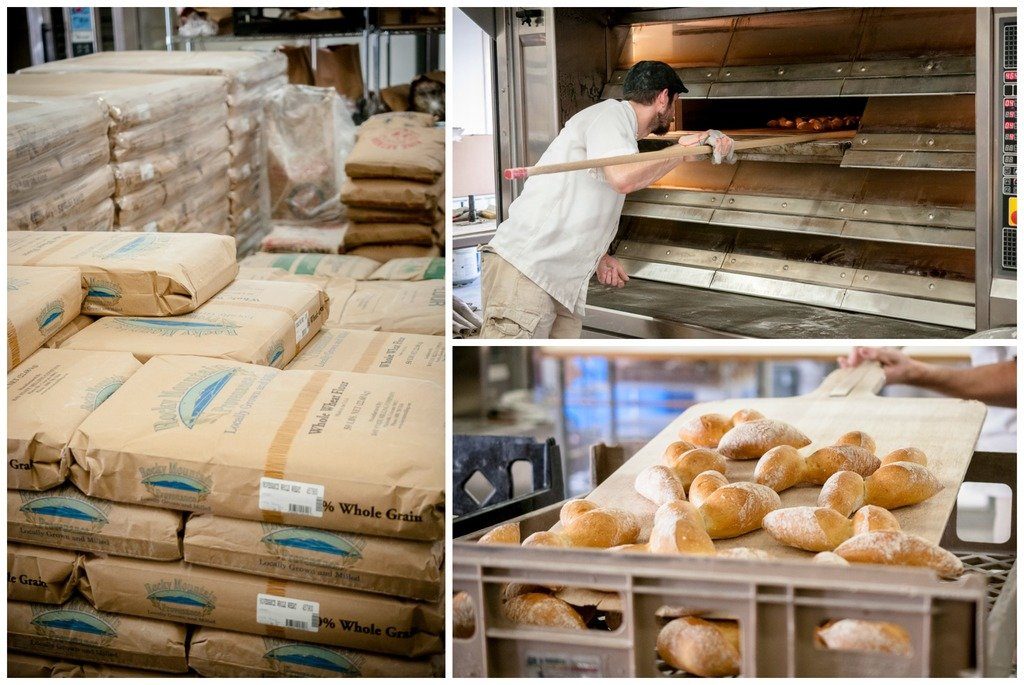 To make the best, you must use the best. So logically, Grateful Bread handpicks their purveyors, many of which are local. The main flour is sourced from King Arthur—the oldest milling company in the country—and is milled across town in Commerce City. Their wheat is also considered local, as it’s grown within a 300-mile radius and also milled in Commerce City. In addition to locally-milled, American-grown, non-GMO flour, the company uses fresh honey from a family of Colorado beekeepers, as well as milk, eggs, and butter from a local dairy.

However, the best is yet to come, as the September arrival of the bakery’s new grain mill from Austria represents a bright, ambitious future.

The mill, a solid pine beauty imported from Austria’s East Tyrolean Grain Mills, can produce up to 200 pounds of flour per hour. Not only will the mill greatly improve productivity, it will supplement Grateful Bread’s dedication to craft. Cleary plans to mill specialty grains: rye, pumpernickel, durham for pasta, OO for pizza, and corn for polenta. This mill also opens the doors for customization. While Cleary currently works with chefs and restaurateurs—such as Jennifer Jasinski—to create custom products for specific dishes, he has plans to grow the bakery’s test kitchen.

Additionally, Cleary intends on sourcing grains and finding farmers who will start growing for the bakery. “We plan to partner with local Colorado farmers to obtain non-GMO, heirloom grains to mill for our bread and for flour to sell to chefs and home bakers in the community.”

As the bakery works to ramp up wholesale production, they also hope to grow the retail side of business. While they previously held quarterly retail days, pre-orders would sell out in hours, and crowds would form four-hour lines. Now that they have the capacity, the company plans to do weekly openings every Saturday, starting December 5.

Cleary says people have also been begging him to reclaim his restaurateur role and open up a retail store in Denver. He explains how most bakeries have some sort of wholesale business to pay the rent. “I already have that. So if I did something in Denver it’d have to be much greater than a bakery. It’d have to be a café concept to meet the volume worth doing.” While he’s been busy installing the new mill, revamping the test kitchen, and “a few things down the pipe that we haven’t announced,” Cleary remains open-minded. “If the right place came along or the right offer came along, I might consider it.”

For now, it can be assumed that Grateful Bread’s diligent, passionate staff will continue to provide hand-made, increasingly hyper-local product to some of the finest tables across the Front Range. And no matter what the future holds for Cleary, he will be working hard to reinvent the way Denver diners break their bread.