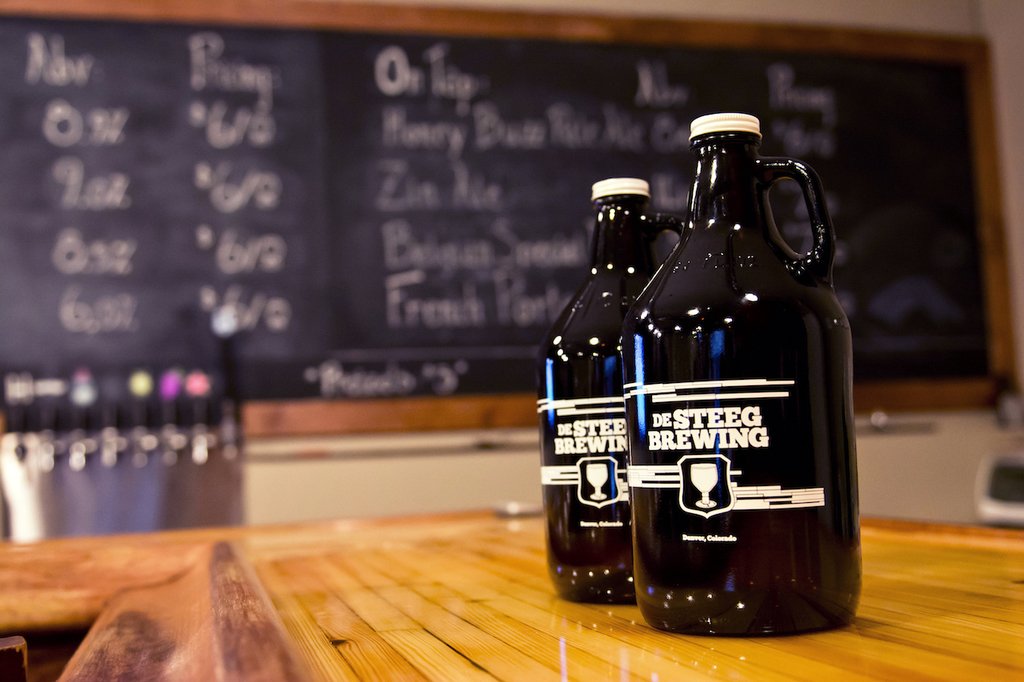 Pros:  Great atmosphere with an amazing array of beers

Cons:  Location can be difficult to find.

Tucked away in an alley with a wordless sign hanging outside, it’s easy to zip past De Steeg Brewing. But as a relative newcomer to Colorado, just knowing where De Steeg is and what they have on tap makes me feel more like a local.  They have the atmosphere and brews to make them THE secret place for Denver locals in the know. 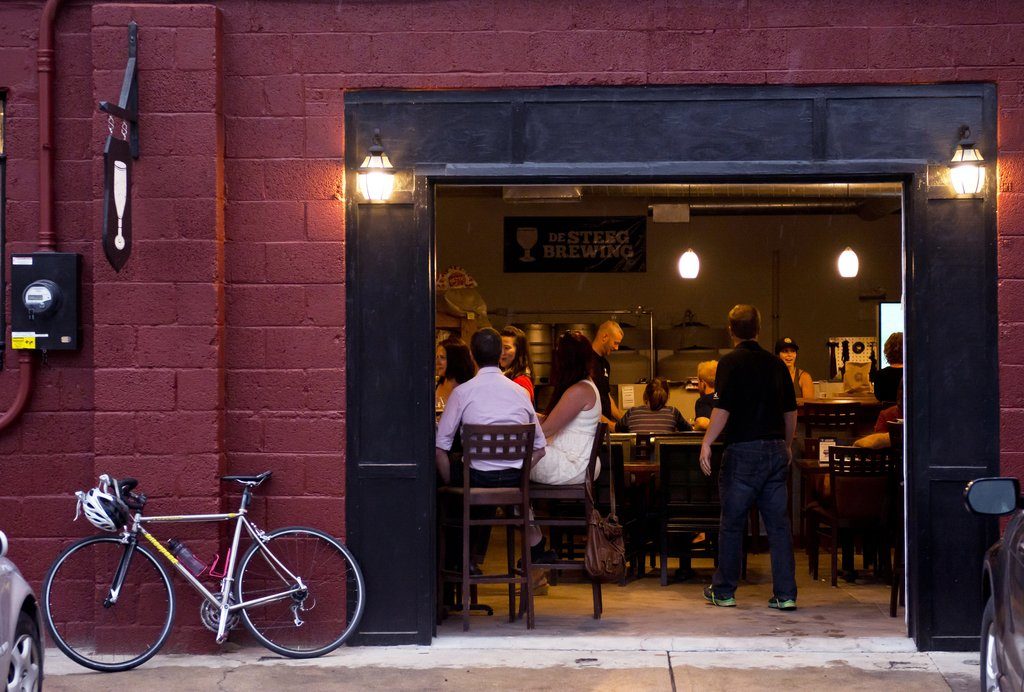 Opened in February 2013, De Steeg has been making a wide variety of beers. From IPAs to a half-wine brew called “Zinfandel Ale,” their list of brews are far and wide. “We do everything,” De Steeg owner and former mechanical engineer Craig Rothgery explained. Before Rogethery came to De Steeg, he was working with the big box breweries for some time, using his skills to help design their brewing systems.  But with eight years of homebrewing experience, when  the company he worked for closed its doors, he decided it was time to change careers.  “I just pulled the trigger and went for it,” he told me, and he’s been brewing his own beer non-stop ever since.

“I was well over the legal amount of beers you can brew at home.”  — De Steeg Owner, Craig Rothgery

De Steeg has a text alert program to tell patrons in the know when a new brew is on tap.  “Every week or two, you’ll get a notice about new beers.”  It’s a fun idea that melds new technology and old brewing techniques.

De Steeg (meaning “the alley” in Dutch) was a compromise name.  Originally wanting to call his business “High Gravity Brewing,” he discovered that there was already a Gravity Brewing opening up in Louisville.  “It worked out well though,” Craig said with a smile.  “High Gravity was kind of a generic name.  This one fits much better.”  He’s absolutely right.  With a speakeasy atmosphere, constantly updated chalkboard full of beers, and interesting art on the walls, “the Alley” is that Prohibition-era joint that makes you feel hip just for knowing it’s there.  As for the beers, well…

I’ve said in the past that Belgian is the up-and-coming trend, and De Steeg adds more evidence to that argument with this exquisite addition to the list of Belgians on my regular rotation.  With a deep yellow color and a nice sour aroma, it balances the sourness you expect from this style of beer with a pleasantly sweet, lightly dry flavor that never lets your mouth get bored.  Oddly enough, it leans more towards a white wine than the beer flavor you remember sipping your dad’s pilsner.  But it’s definitely beer, and walks that line between wine and beer in such a way that it almost redefines what you should expect when you crack open a new brew.  Definitely a tasty offering, this should be the beer you reach for when you’re after something mellow (but at 9% abv, don’t expect to reach for too many).

I’m not ashamed to admit that I’ve had more than a few honey ales in the past, but this is the first one that smells like straight honey.  Making use of Buzz Bullets Hops, one of the newer hops to come out of the agricultural scene, it absolutely delivers on its name.  It sort of defies categorization, with a toasty bread, sweet flavor at the start of your gulp, but with definite hops bitterness at the end.  The aroma tricks you into thinking you’re getting something sweet, so by the time it clears your sinuses, the bitters start to come through.  Half tastes like a brown ale, while the other half tastes like a pale.  I had trouble wrapping my head around this one, but it is definitely worth going back to.

Looking more like wine in the glass than a beer, this is another De Steeg brew that walks that line between wine and beer in a way that shouldn’t be possible.  It has an aroma that is much more like red wine, but the flavor definitely brings some malty sweetness to stand side-by-side with the grapes that Craig added to the fermenter.  It is only lightly sweet, with a dryness that cleans out the inside of your mouth and leaves you wanting more.  I jokingly referred to this as a “Frankenstein beer,” but that doesn’t really do it justice.  It smells like wine, but tastes like a lambic, but without the telltale sourness…as much as I hate to say it again, it defies categorization.  Get down there and taste it yourself.  You won’t be disappointed

I had saved this one for last, expecting a porter to finally give me something familiar.  Alas, I wound up writing “the wine of porters” in my notebook in lieu of really understanding this beer.  Its nose balances sour and malt in a pleasant way that lets you know what flavors to expect.  And it does deliver, balancing the two in an artful way that brings new dimension to an older style.  It has a short finish and a light dryness that lacks the chewy body you get from most porters, but that’s what makes this beer interesting.  It would be refreshing except for its 8% abv, which could get you into a lot of trouble.  I recommend giving it a try.  If you’re a fan of porters or are looking to get into the style, this is a great place to start.

I’ve been hearing whispers lately that, due to amazing beers that don’t strictly adhere to specific styles being produced by smaller breweries and homebrewers, the Beer Judge Certification Program may be in jeopardy.  I was skeptical until I came to De Steeg.  They have a lineup of beers, some of which don’t necessarily classify as 100% beer, that are 100% delicious.  Nobody can try these brews and question Craig Rothgery’s skill at the mash tun, so how do you judge his kind of beer?  Head down to De Steeg and tweet your reactions to me.  I’m genuinely interested in what people think of his brews.