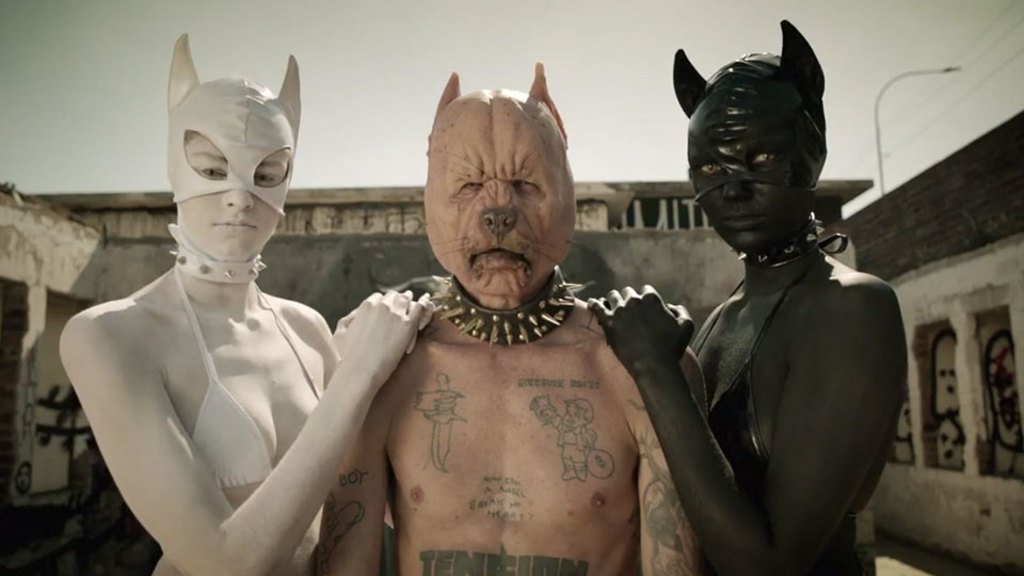 The latest music video released by everyone’s favorite South African freeky duo, Die Antwoord, for their new song “Pitbull Terrier” certainly lives up to par with the rest of their bizarre and grotesque collection. Pitbull Terrier, directed by Ninja himself, features our disgruntled hero wearing a mask that closely resembles a pitbull, if a pitbull were a towering, tattooed and terrifying mound of muscles who is capable of leaping between buildings and tearing our throats, spiked collar and all.

As a pitbull, Ninja spits lyrics and chases “pussy” all over town, slaughtering everyone along the way. He eventually has a run-in with the ever-sexy and impressively creepy Yolandi, who is adorned in bizarre satanic face paint. She seems to put a spell on the rabid and ferocious pitbull version of Ninja (who isn’t all that unlike the regular version of Ninja), temporarily pacifying the creature. And in the end, well- spoiler alert!– Yolandi brings pitbull Ninja back to life (after he gets tragically smashed by a bus) by spitting in his mouth.

The entire video is an intense and gory blood bath, with some scantily clad cat-women and leg humping to boot. Plus, the song is totally badass.

Die Antwoord will finally be making an appearance in Denver in September at Riot Fest. But if you can’t wait til then to catch the weirdness, you can find the rest of their US summer tour dates here.