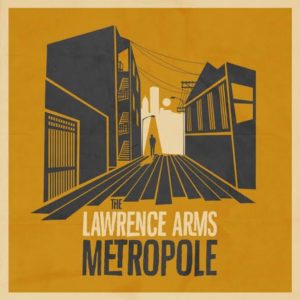 There are some bands who just stand the test of time. The Lawrence Arms may not have consistently toured or made records for the entire fifteen years they have been a band, but I think that might be part of their secret to success. Although I wasn’t terribly familiar with this band when I spoke with Chris McCaughan on the phone, I was immediately struck by his calm resilience and ability to put things in perspective. With an outlook on life this positive, no wonder these guys have been making music for over a decade. In anticipation of their upcoming show in Denver, I caught up with Chris about the band’s new album, Metropole, avoiding stagnation, and the staying power of the punk rock scene.

303: So, are you all stoked to play in Denver? Have you had good experiences playing here in the past?

Chris: Yes, totally excited – it’s been a long time. We always have a really awesome time when we play in Denver; we have a lot of friends here. I’m really glad that we were able to make this work out and include a stop in Denver to our West Coast tour. It’s been too long, and I’m really stoked for this show.

303: You’re from Chicago, which seems to be a great place for music scenes of all kinds. How did getting started their influence you as a band?

We were all born in Chicago, and we knew each other since the fifth grade. We kind of discovered a lot of punk music together in eighth and ninth grades, which was pretty important for our development — as people really — and as a band. Chicago was very influential in getting us started and in us sounding the way we do. Chicago has always had a very strong local scene and underground punk scene. We would be going to see local bands like Naked Raygun when we were about fifteen years old. So yeah, I would say it influenced us a lot!

303: Your new album, Metropole, just came out on Epitaph Records, which is pretty awesome. Tell is a little about the new album. How is it different, and how have fans been responding? Also, what prompted the shift over to Epitaph?

It’s been about eight years since we’ve made a full-length [album], and we really haven’t done any heavy touring. We had an amazing opportunity to work with Epitaph this time around. We were on Fat Wreck Chords for ten years, and they were great. But this time we had a chance to put out a record on Epitaph, and that was mind-blowing and awesome.

So far, the response to the record has been really awesome, both with the fans and the press. I think it’s important for us to make records not just because we can, but because we have something to say. This is why we waited so long to put out a record; we didn’t want to do one just because we could. Now, I feel really good about the content of this record; I think we had a reason for writing it. 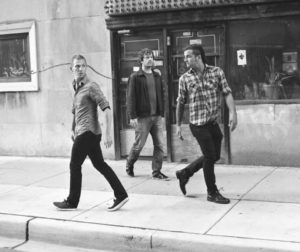 303: You all have been around for over ten years! That’s a long time; what’s your secret for not driving each other crazy, and how does it feel to have come this far?

Yep, it’s been fifteen years! There’s no real trick – these guys are my family and some of my best friends. Also, we’ve taken some breaks over the years, so I guess we’ve avoided the burnout of the cycle – we aren’t just constantly making a record, then touring, then making a record. We’ve taken a few breaks to kind of focus on other things in our lives. When you take a break from things, there’s kind of a renewed energy. Also, we just really like to hang out with each other! I don’t think we could do this if that wasn’t the case. So, there’s no real secret.

303: It seems that punk rock is very much about wearing your emotions on your sleeve, lyrics-wise. Is it nerve-wracking to put everything out there, or is it kind of cathartic?

Brendan and I come from somewhat of different perspectives – and I think people respond to art when you can be honest and emotional and authentic. We both just write stuff without worrying about how people relate it to our lives – like if they think these are things we have really, personally gone through. And we try to translate our experiences of living to something a bit more universal. We take themes and elements from our own lives that people relate to, and kind of let them interpret them how they will.

303: Going off of that, who writes most of the lyrics in the group, and what is your writing process?

303: How do you feel about the punk rock scene today? What has changed since you all started? What is good and bad about the scene today?

I think music in general has shifted a lot because of the internet. We’ve been fortunate enough to work with a lot of really influential people over the years. The Chicago scene still seems really vibrant and strong. I don’t know exactly what is going on with the younger scene worldwide, but I kind of feel like we’ve carved out a place within the scene where we fit in, even as we get older. What’s cool about punk rock is that the scene builds an infrastructure where you can rely on each other for things, and hopefully find like-minded and open-minded people. It may not feel quite as inclusive as it once did, but since we’ve been on this tour, it still feels very alive to me. And quite honestly, I think at some point we stopped worrying about scenes so much, and stopped trying to fit in. The scene will keep growing and changing, but I think we have some good fans, and I know we’ll always find a place in punk rock.

303: What do you all have in store over the next few years? What can we expect from The Lawrence Arms?

The Lawrence Arms will be playing at Summit Music Hall on February 22nd with Potato Pirates and Teenage Bottlerocket. For more info and to get tickets, go here: http://thesummitmusichall.com/events.cfm?promotion=14361 .