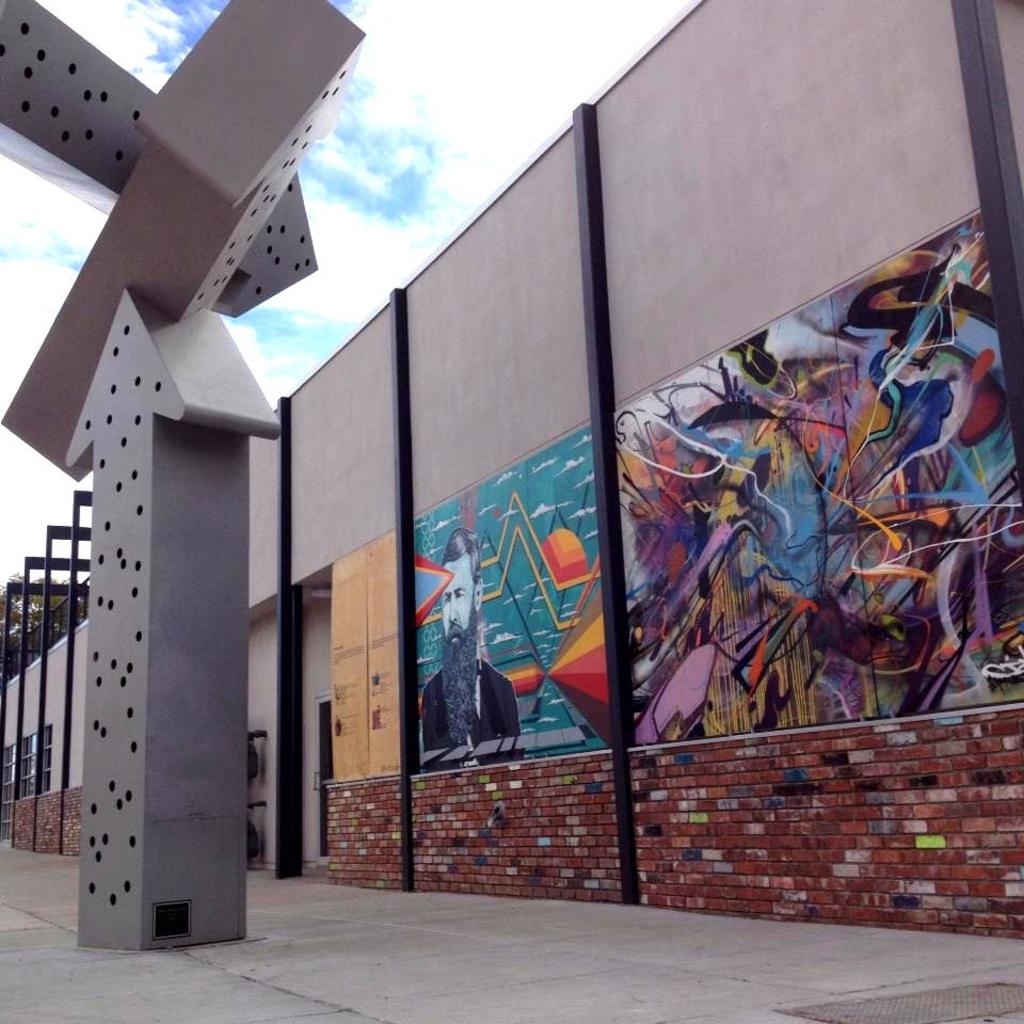 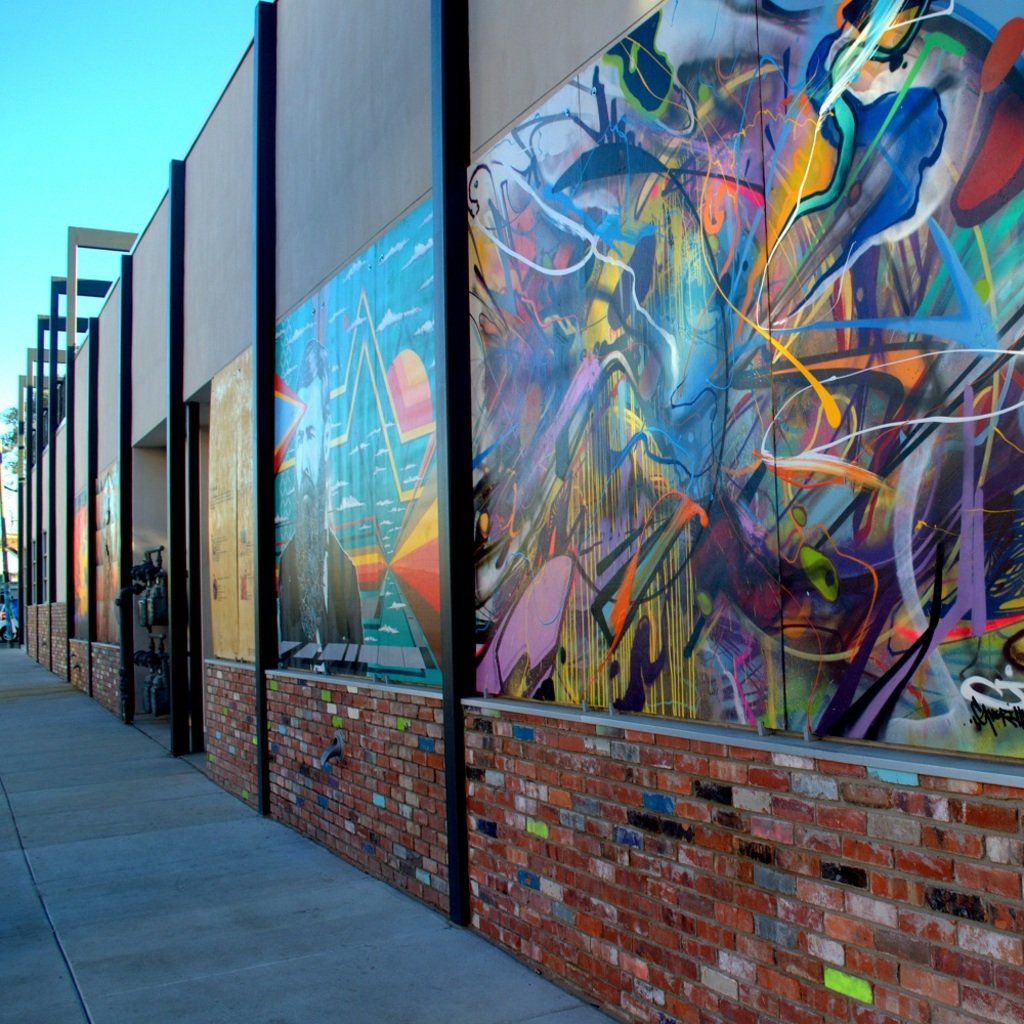 The term public art gallery takes on new meaning with the addition of four high-art urban pieces on Larimer and Broadway at the establishment known as the Broadway Triangle Art Wall. The dynamic gallery unveiled last Friday will rotate local and international artists every 6 months. I was lucky enough to witness the beginning of a new Denver tradition at this chic spot where street and high-art combine.

Mike Moore, principal & founder of architecture and general contracting firm Tres Birds Workshop, kicked off the event. Tres Birds is a prestigious and wildly imaginative architectural and design firm based out of Denver. The space will be an addition to the TAG Restaurant family and will feature a variety of restaurants including a taqueria Los Chingones upstairs with an amazing rooftop deck, as well as an upscale bakery Sugarmill boasting world renowned pastry chef Noah French. Thanks to the teams hard work, this space has become a reality. Josh Fine, Vice President and General Counsel at Focus Property Group, the building developer who underwrote the project, also spoke at the event. 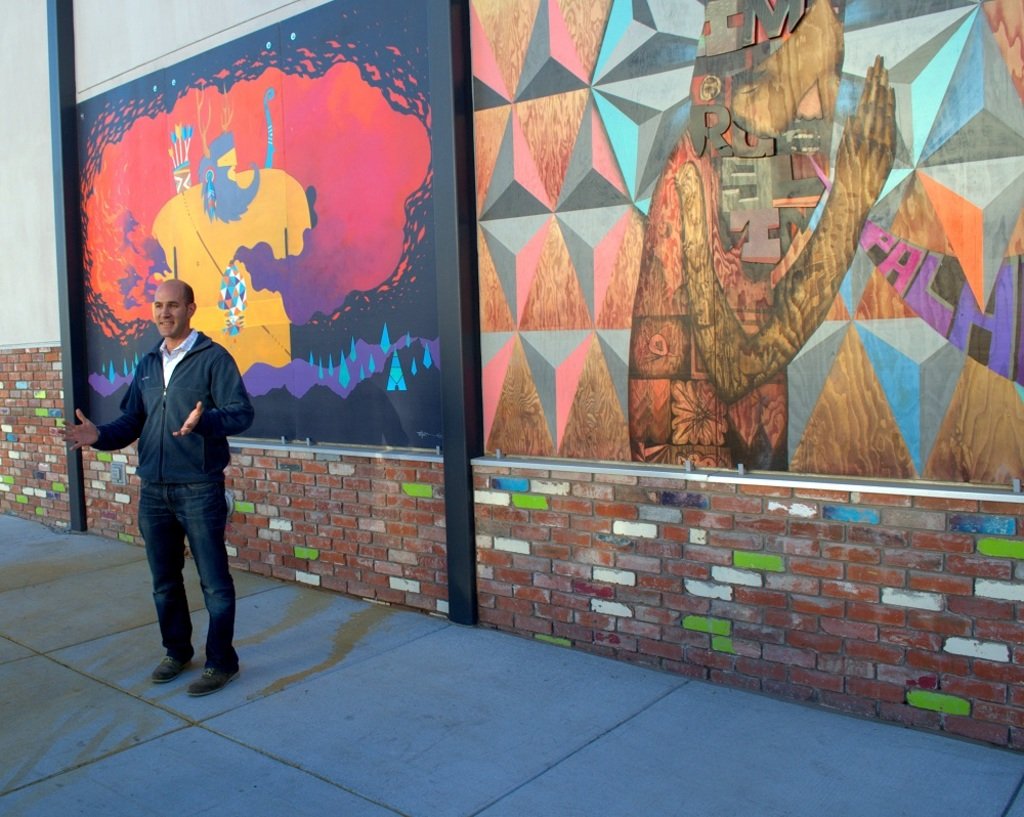 “We want to provide a canvas for the fine art in the neighborhood.”

Fine’s presence was a testament to the significance of this establishment. Both Fine and Moore stressed the importance of the artist. Their goal was not simply to create a dynamic public gallery experience, but to put the control in the hands of the artists. This allowed artists to use their own studios and transport the work to the permanent location. Each artist’s section measures 12×8 feet and all four, massive pieces together measure 48×8 feet. The wall represents the end, or the beginning, of the 5 blocks of alleyway that is completely decked out in art. The Broadway Triangle Art Wall is now part of the neighborhood. Moore poignantly explained his angst with street-art appreciation:

“I’ve literally cried when a mural I love gets covered up. This is the way to give artists the opportunity to show their work, it’s a way that they won’t be taken down.”

Melissa Belongea of Applied Anthropology worked with the team at Tres Birds to organize the huge artistic endeavor. She explained her excitement for the gallery and the importance of the art not just to the individual, but to the community and culture of this district. The excitement builds for the ribbon-cutting event as the restaurants will be open late November 2013. Peruse the art gallery for yourself and tune into 303 Magazine for upcoming reviews and events at the sweet new digs.

This inaugural round of outdoor art represented some of Denver’s most elite artists. The first piece comes from the mind of Concrete Canvas favorite Jolt aka Guerilla Garden. Mike Moore explained, as best he could, the artists wild inspiration for the piece. Jolt listened to the song Maggot Brain by Funkadelic on repeat for an entire day and every sound, every instrument, and every beat is represented by a different color. 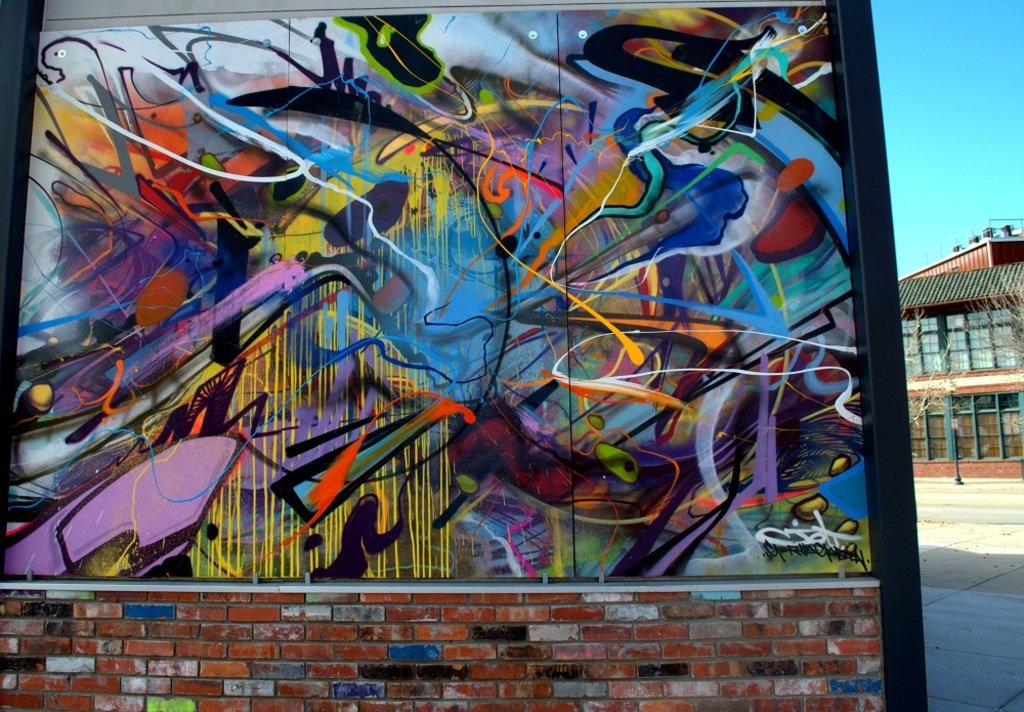 The second piece was done by favorite local artists at Like Minded Productions, Jonathan Lamb and Michael Ortiz. The piece utilizes their bright, graffuturistic color palette that takes the passerby into the painting itself. The portrait is that of General Larimer, one of the pioneers and founders of Denver. This is ironically the only known photo that exists of General Larimer. It serves as a reminder of our past and a cheers to our future. This future hits close to home for Like Minded Productions as their studio is found a few blocks down the street. 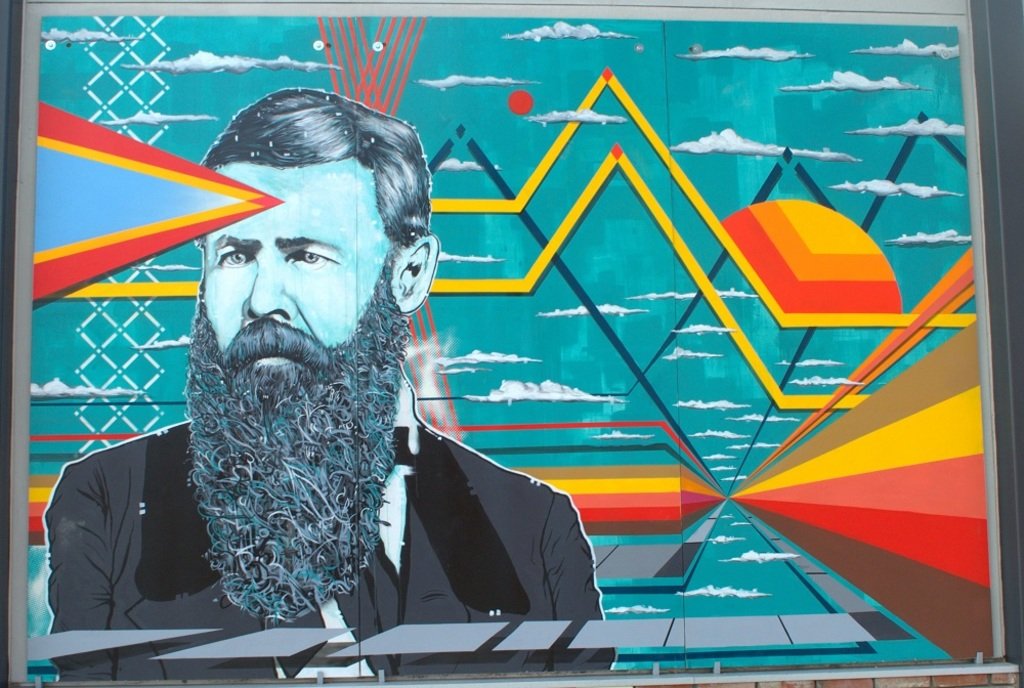 Like Minded Productions is deeply involved in the art scene in Denver. I cannot stress how important it is to give credit to the artists who make these murals possible. Like Minded Productions and Tom Horne of Blackbook Gallery worked with Wynkoop/Breckenridge creative director Lisa Ruskaup to co-curate the artists for Session Kitchen. They reached out to the city for zoning approval, often one of the most challenging aspects of sanctioned art. None of the beautiful art at Session would have been possible with Lamb, Ortiz, Horne, and many other artists who do it for the love and not for the credit. The praise and knowledge of their hard work is why Concrete Canvas exists.

This next piece was done by local artist trio Palabros/Collabros, aka Jaime Molina, Pedro Barrios, and Joseph Martinez. Their collaborative work uses similar stylistic devices and can be found, among other pieces, on the New Belgium Mural further up the street. Molina, Barrios and Martinez expressed how much they loved the freedom of working in their own studio for this project. It allowed them to use an unexpected street-art mode, wood, as well as a brand new three-dimensional element. Barrios explained this was an experimental idea that Palabros had never worked with in the past. The 3D lettering is perfectly executed and I’m curious to see what multi-dimensional elements we will see from the trio in the future. 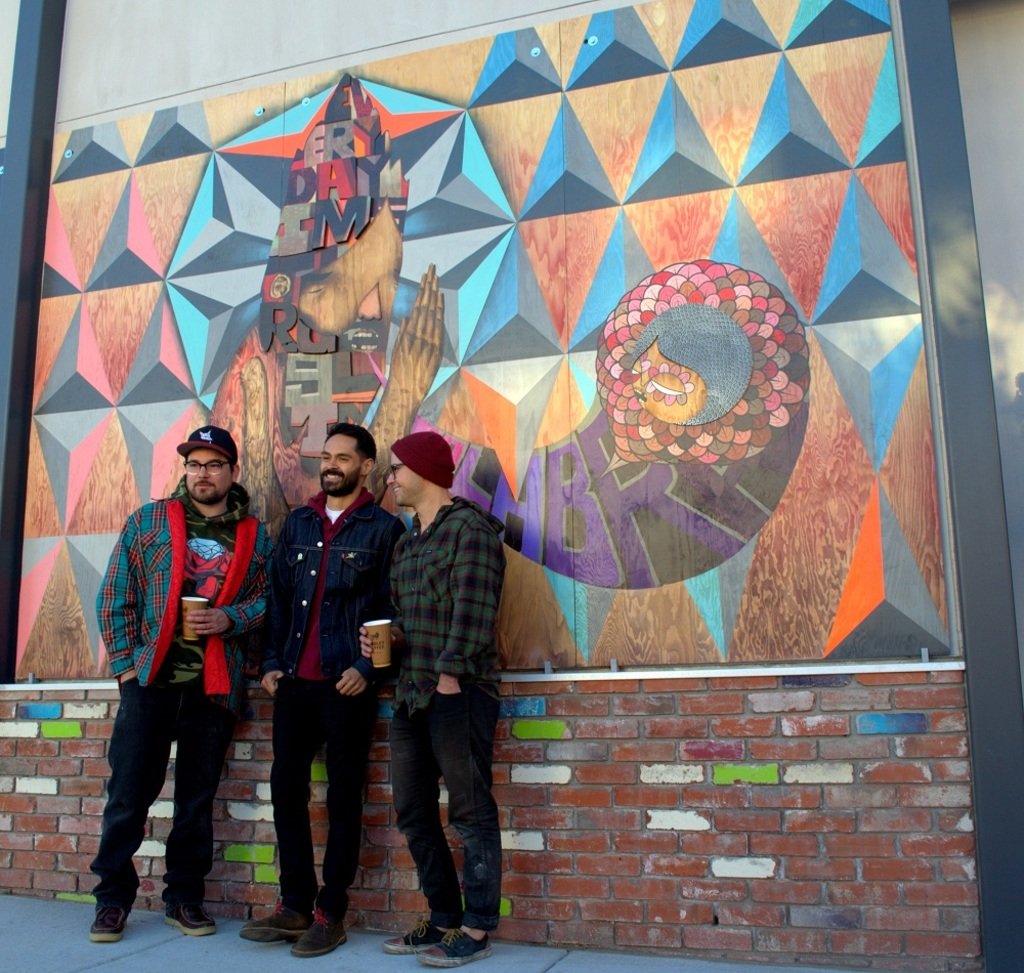 Each artist works in their independent area of expertise. The larger character, his expression, tattoos and intricate, black details are done by Molina. The astounding 3D element that reads “Everyday I’m Strugglin’,” and “Palabra,” (word in Spanish) was conceptualized by all three of the artists and, along with the execution of the smaller character, done by Barrios. The complex background of geometric triangles that literally pop off the wall were created by Martinez. The finished product is viscerally jaw-dropping. 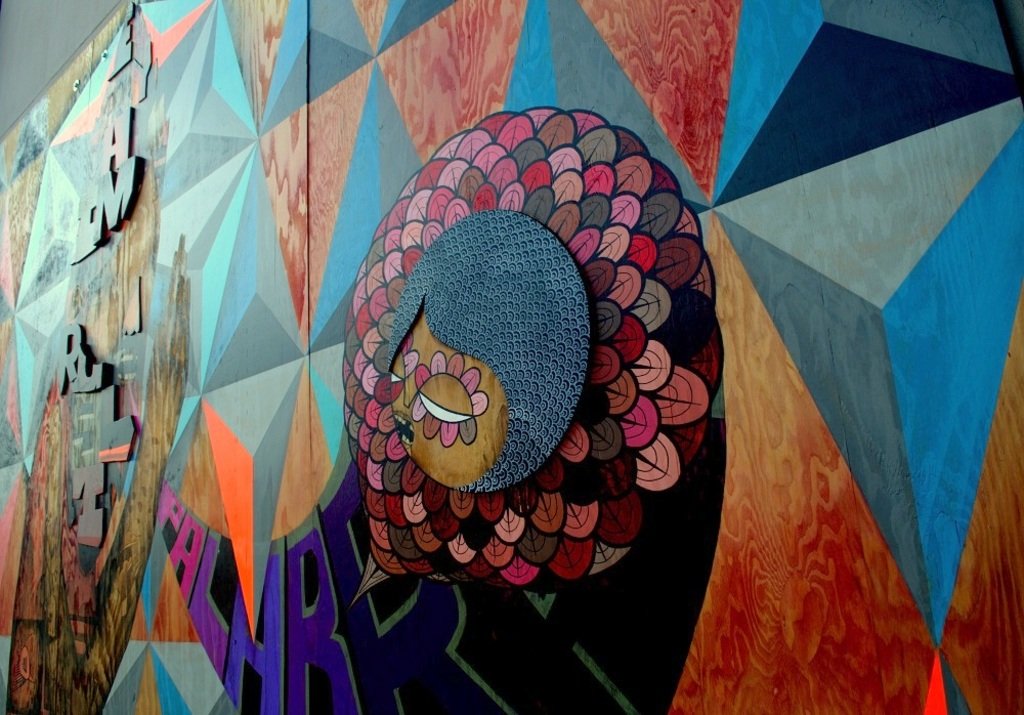 The fourth piece in this dynamic gallery is by international artists Deepti Nair & Harikrishnan Panicker who hail from Mumbai, India. In comparison to the local artist on the other three pieces, Hari and Deepti represent an international point of view for the wall. The world renowned artists take passerbys through history and across the boundaries of imagination and perception. Hari and Deepti also show art at Blackbook Gallery and have made Denver home. They effortlessly created a dialogue with the neighborhood and it’s culture in this bold and colorful representation of individuality. 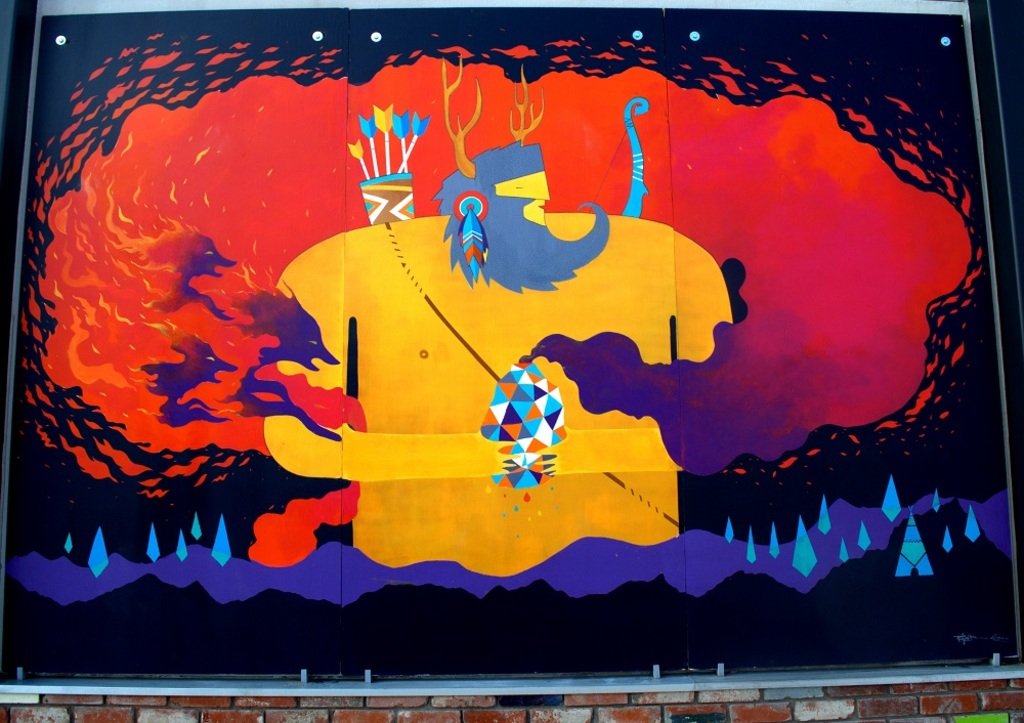