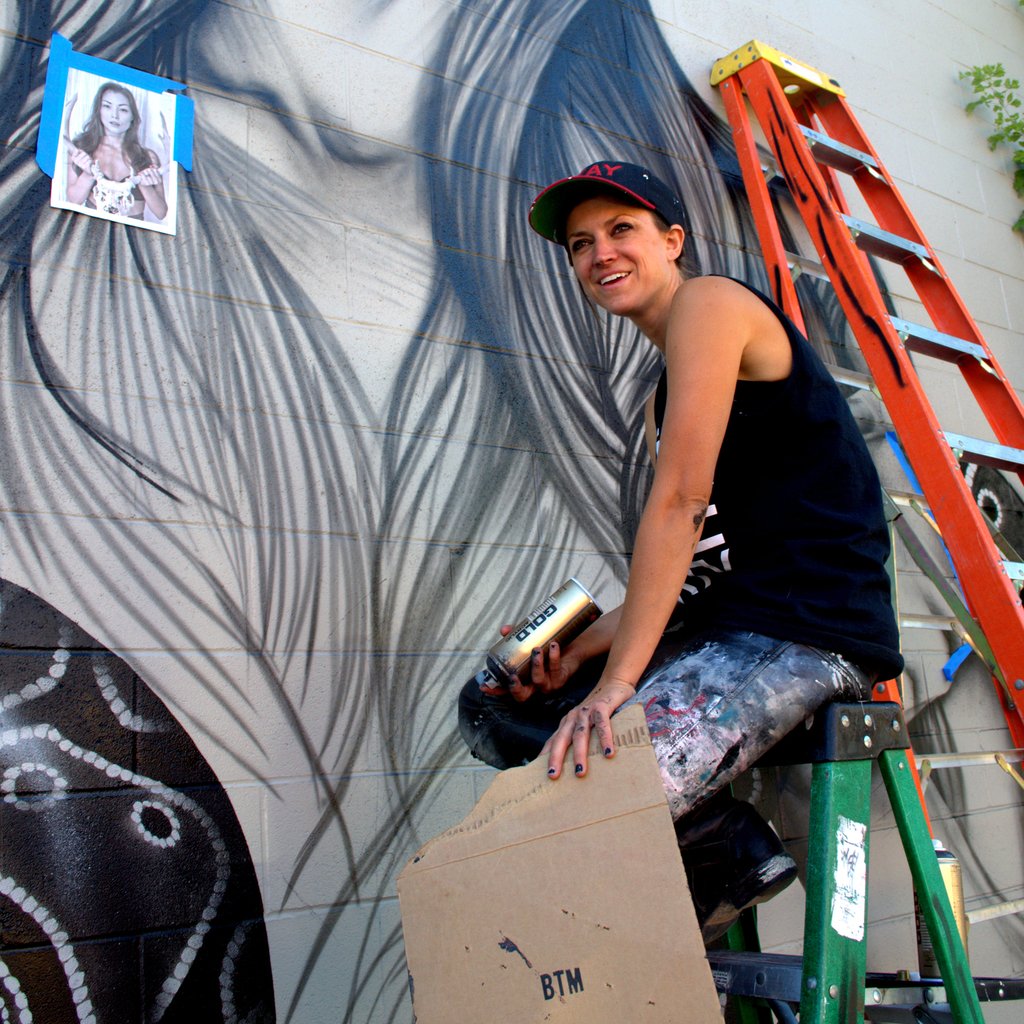 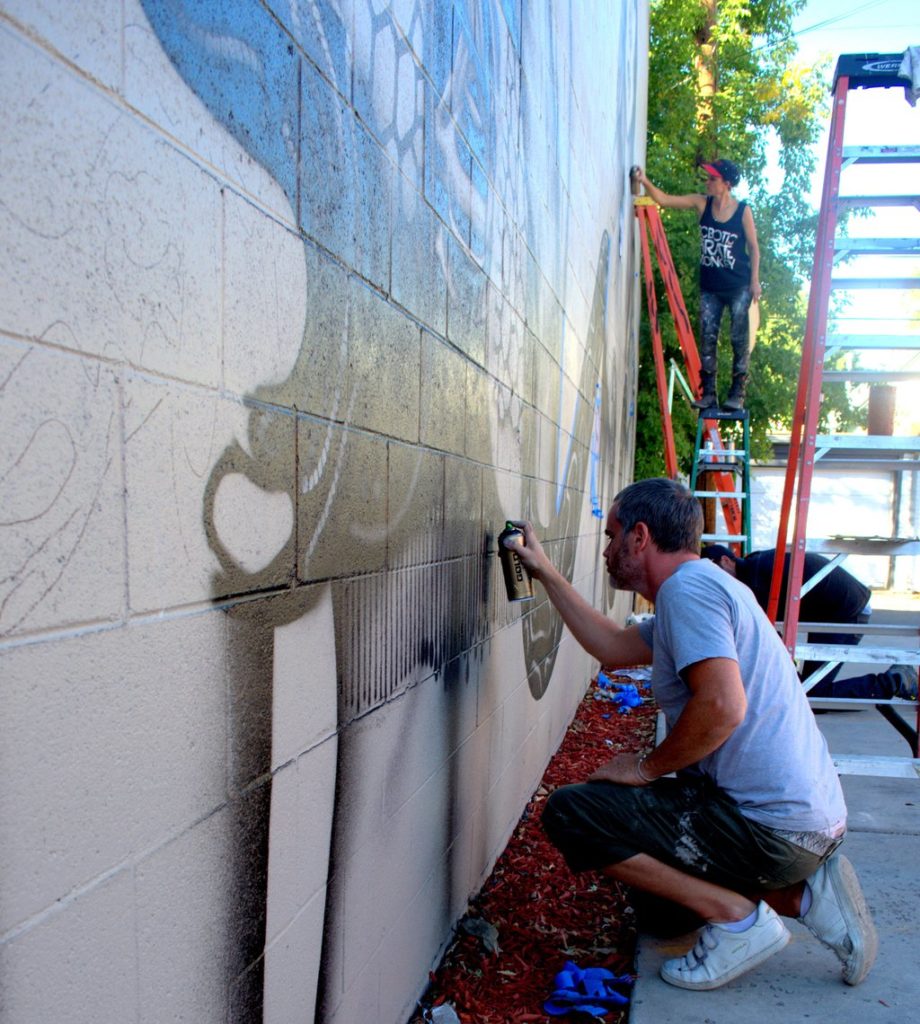 Denver was visited by some amazing, international street-artists this past week, Fin Dac, Christina Angelina, and Eine. Fin Dac is a London-based artist who is in the United States for the first time, not just in his street-art career, but in his life. Fin is brilliantly painting his way across the country with artist Christina Angelina. Angelina is a multi-talented portraitist from LA whose ambition and meticulous attention to detail blends effortlessly with Fin Dac’s world-renowned style. Ben Flynn, better known as Eine, is another famous artist out of London. He just painted a block letter mural inside the dream-like new establishment Session Kitchen. Keep an eye out for the grand opening!

The collaborative snake-charmer portraits done by Fin Dac and Angelina are strong, sexy, often tatted-up, mysterious, empowered and always beautiful. Located on Alameda and Cherokee, it is the second of three projects for Fin and Angelina involving the serpent. It represents duality, the natural progression of life, balance, and takes on an almost biblical connotation as it follows their previous collaborative theme revolving around Angels.

The first piece in the serpent series was done in a desert near California known as Salton Sea. It is a toxic spot where high levels of sodium are almost unbearable, causing plant life and water to be scarce. The piece is surreal and the portraits breathe life into the uninhabitable area. The serpent theme continues once Fin and Angelina leave Denver as they have their sights set on a huge wall in Minneapolis, Minnesota. When asked about the meaning of their transition from Angels to Serpents, Angelina said:

We used to be so good, now we’re so bad. On our first trip, all we did was work. Now all we do is go to strip clubs.

Angelina is a creative muralist hailing from Venice Beach, Los Angeles. She loves the scene in California, yet this is not her first time in the Mile High City. California and Colorado share the same Western, laid-back mentality. Our similarities are a big reason she loves visiting the scene and has designed 5 murals and a wheat-paste in Boulder, as well as another mural just completed this trip on a business wall on Colfax and York. Angelina’s portrait work is seamless. Her presence is intoxicating. Both Angelina and Fin make it look easy. Each portrait, no matter what city they find themselves in, is somehow unique and more beautiful than the last.

Together, Fin and Angelina have captured and redesigned the raw emotion of three muses with Chinese-mixed nationalities. Fin receives head shots from his three models, then takes creative liberty in designing their scenes, themes and movements. Another testament to Fin Dac’s worldwide fame is the unprecedented number of tattoo tributes to his work. A hot girl with a tattoo of a hot girl with a tattoo. It’s a never ending image. When asked about his tatted-girl fetish, Fin said:

Oh yes. Love girls with tattoos. My girlfriend is covered in them. I don’t have any. It must be because I’m Irish. 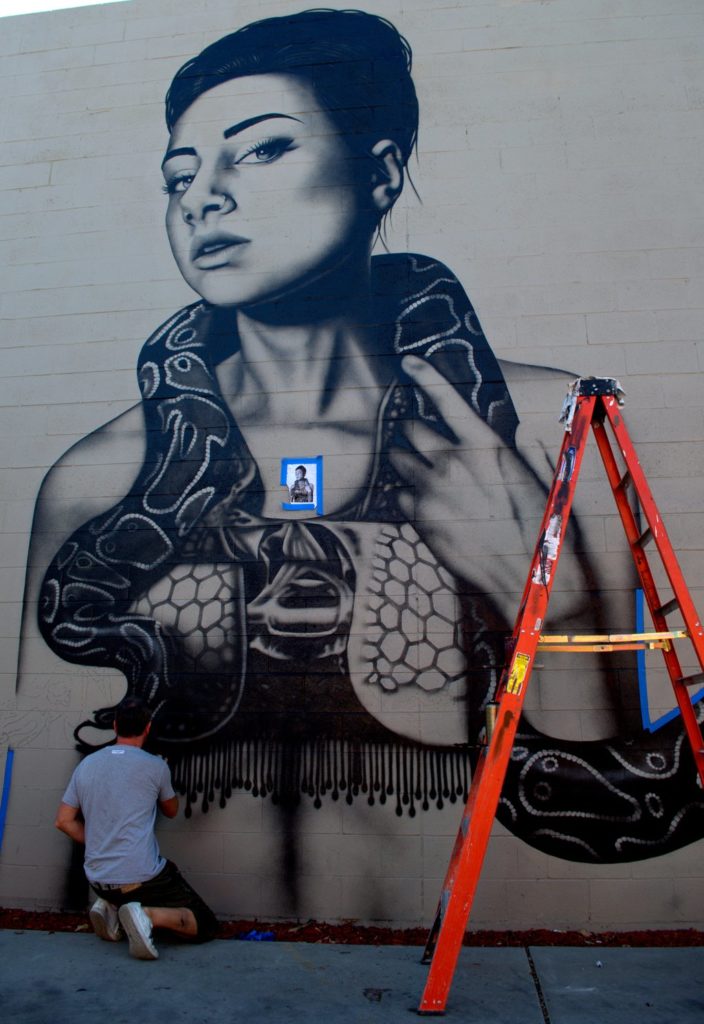 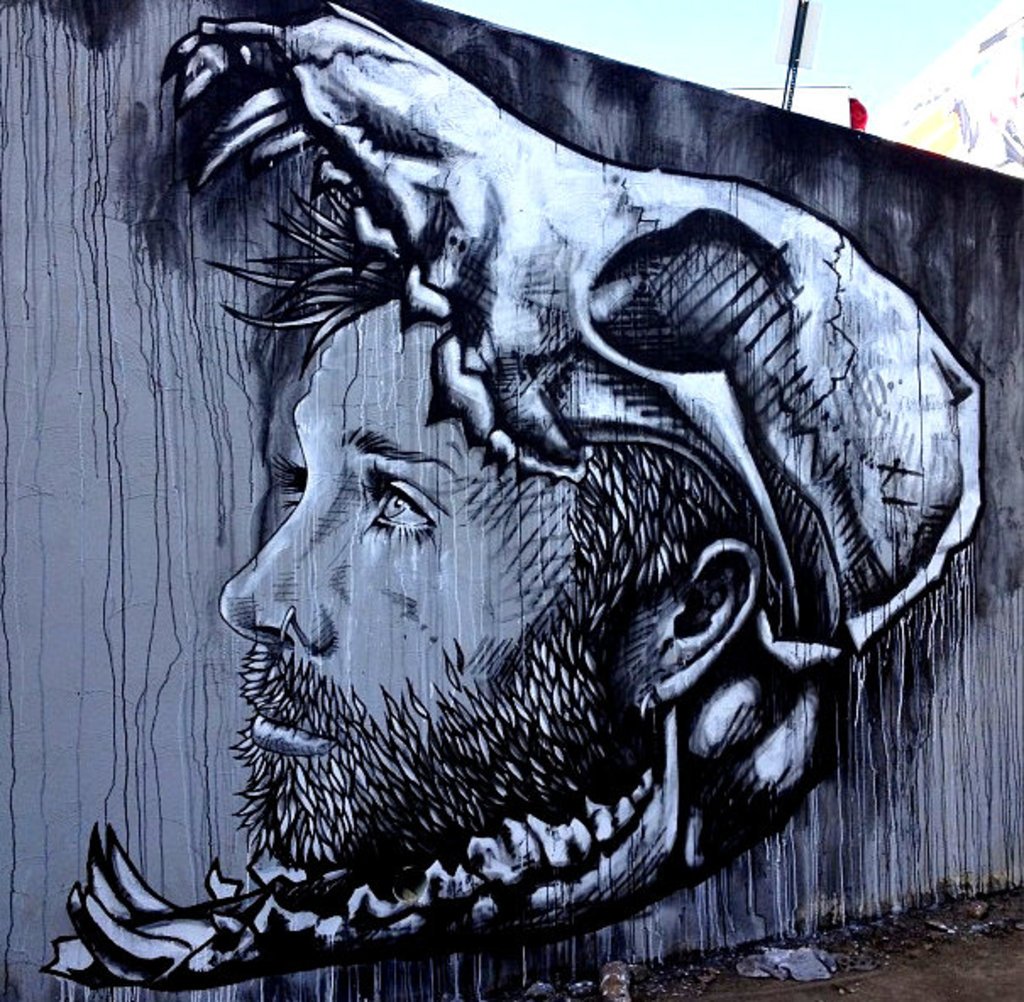 Fellow artist and documentary photographer Craig, also known as B4Flight, has been working and travelling with Fin and Angelina during their epic trip. Craig is a truly present spirit, an artist, and a wanderer. His unbelievable talent decks walls all over the nation. Two murals can be found in Boulder, Colorado, as he has left his signature in intense animal-bone versus portraits. We share an enthusiasm for art, and a less-is-more mentality. In his own words:

Craig really did walk 900 miles across the country and spent time painting, celebrating, and documenting his experiences in 16 different cities. Of all of the amazing places he has been, Denver lands at the top of the list. See more of his work in Denver and Boulder and follow his travels on Instagram @b4_flight.

Eine’s mural and the light installation at Session Kitchen

Denver also welcomed prolific, London based street-artist Eine to grace her walls this week. Eine has direct links to the White House, as his print was given as gift to Barack Obama by David Cameron, but is more well known for his work in London entitled Alphabet Street. Eine worked exclusively indoors and was asked to create his bold, bright, block-letter style text for the interior of the new Platte Park restaurant Session Kitchen. 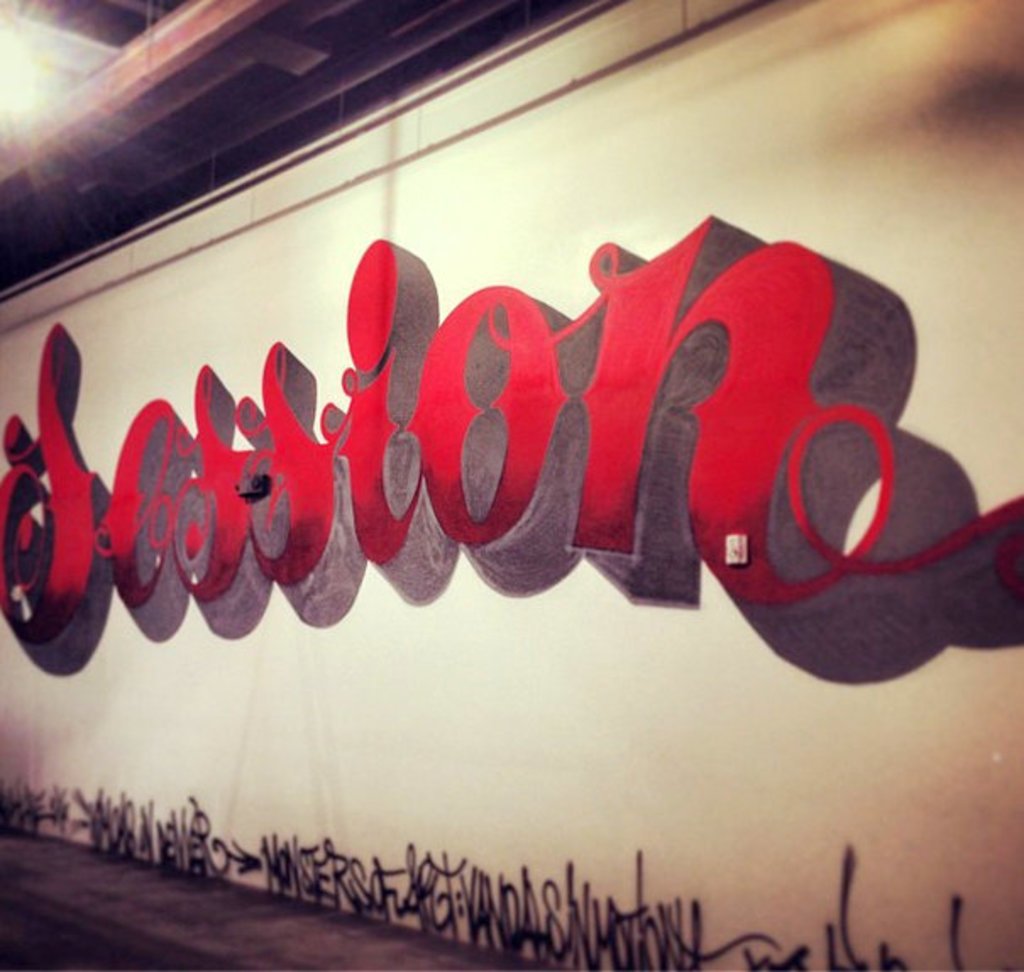 Session Kitchen will be the 14th establishment from the Breckenridge-Wynkoop family. Owner Lisa Ruskaup’s vision the for the brewery is truly monumental. The interior will highlight urban aesthetics. Look for events as well as restaurant reviews in future 303 Magazine articles!

Along with street-art lining the walls of Session Kitchen, light becomes art. The restaurant will boast an insane, icicle-esqe installation by the inventive minds at Lumigeek, Jen Lewin Studio and the architects at Bldg Collective. 450 feet of repurposed fluorescent light bulbs and 900 feet of pixel controlled LED makes the light appear to dance to the music. The color transforms from icy blue strobes into fire. It looks like a literal dream. Accompanied by the street-art painted walls, Session Kitchen will be a breath-taking visual experience. See for yourself in this teaser photo courtesy of Session Kitchen’s Facebook.

Christina Angelina’s piece on the inside of Session Kitchen will be the fourth known mural for the establishment. I can’t wait to see the finished result. As Fin Dac explained, the owners want to emulate the Wynwood Walls in Miami. Wynwood is an historic warehouse district and graffiti spot that is layered with murals done by the most famous artists in the world. Fin Dac would be a part of such a venture in Colorado. Work from world renowned artists like Eine, Angelina, and Fin is the reason Denver’s scene is finally receiving the praise it deserves. 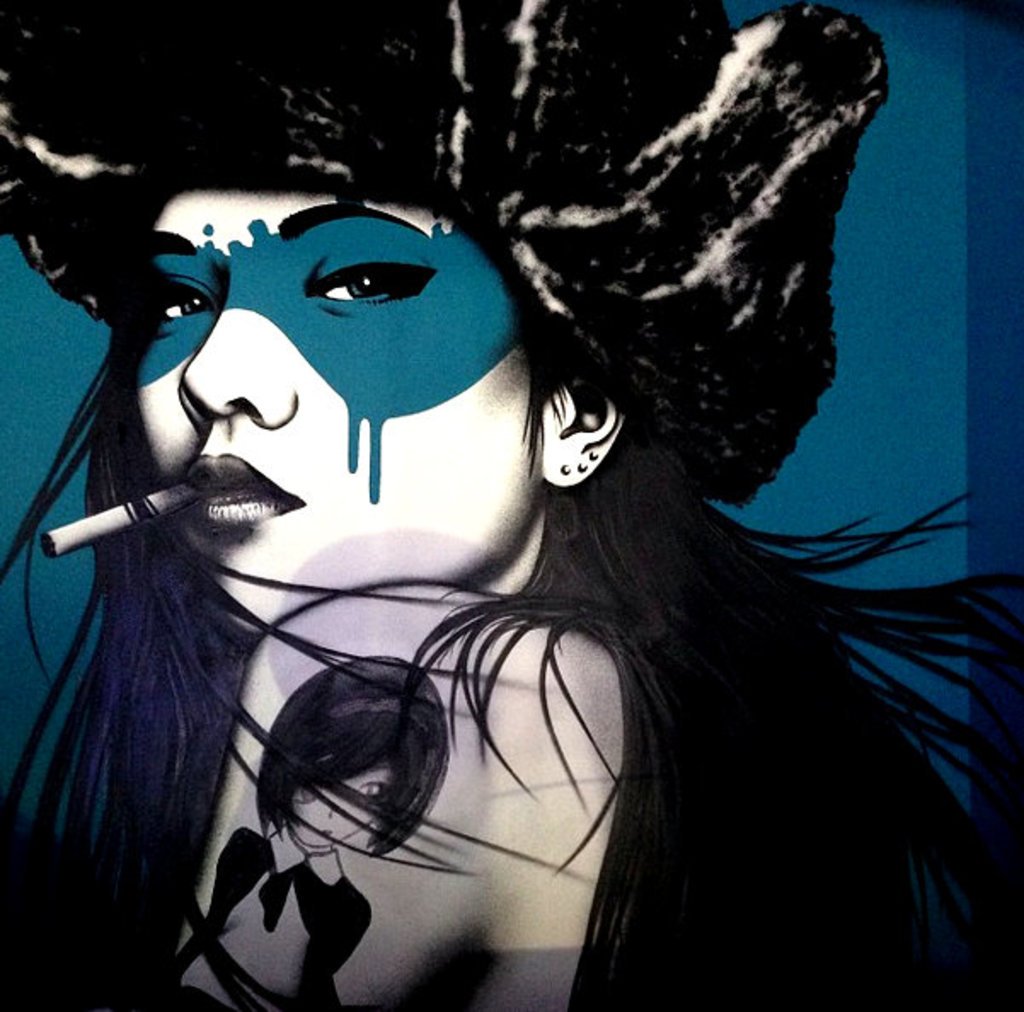 Search the hashtag #303Graffiti, follow us on Instagram, and tune in to Concrete Canvas every week as we feature the beautiful, new pieces around town!