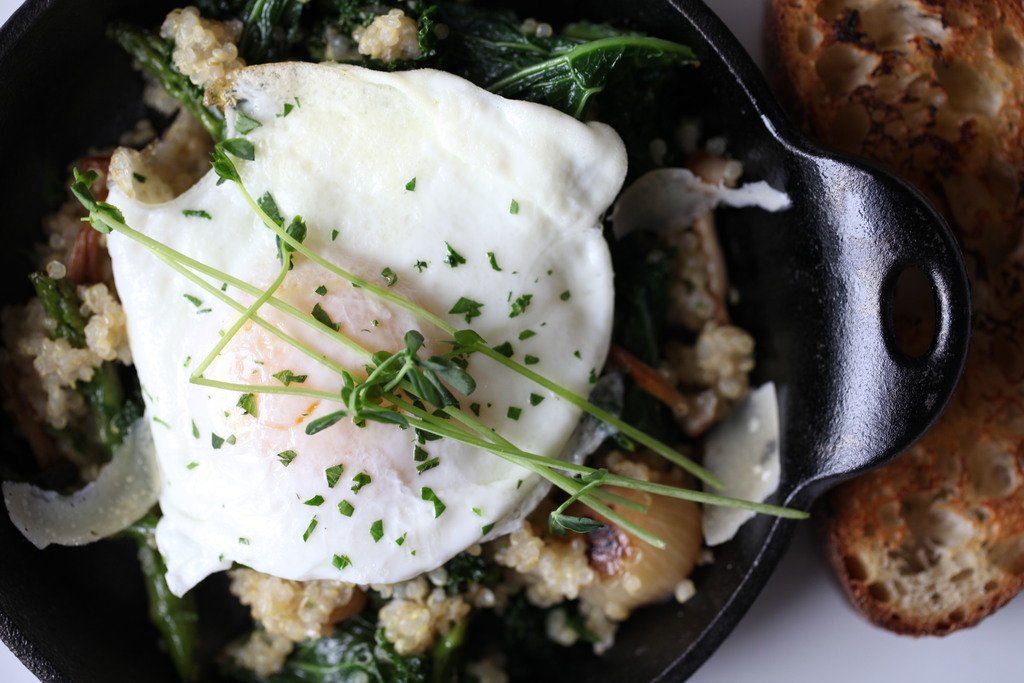 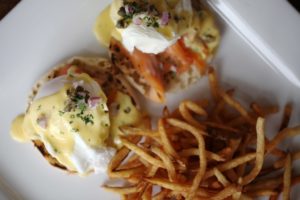 You’ve got to try: The Eggs Benedict featuring local, organic eggs sourced from the restaurant’s own flock of hens while sipping a Lime After Thyme on the patio.

At Cottonwood Creek Farms in Merino, Colorado, there’s a flock of Rhode Island Red hens basking in the good life and laying eggs especially for Beast + Bottle. For this cozy uptown Denver eatery run by brother and sister team Paul C. Reilly running the kitchen and Aileen Reilly heading up the front of the house, it’s the personal connections to where the ingredients come from that really makes this food something special. Produce, fish and meat come directly from farmers, ranchers and purveyors to the restaurant’s kitchen. Meat is butchered in house and used head-to-tail resulting in some unique dishes, and the menu changes seasonally as new produce ripens.

The restaurant is small, with half the space filled by the kitchen that can be seen as you walk up to the building through the large, open windows. Inside, light, clean décor is dotted with personal touches like black and white photos. Prime brunch seating can be found under shady umbrellas on the front patio, and the best part? There was no wait, even on a sunny Sunday morning.

The “bottle” in Beast + Bottle is given special attention at brunch. While you can enjoy wine in the European tradition, served as you like it from half-pours to carafes, it’s the brunch cocktails crafted by Dean Copeland that deserve special attention.  I was craving a bloody Mary, and happily found several adaptions offered at Beast + Bottle including the Mesquite Wood Bourbon bloody and, my favorite, the Come on Aileen! which kicks up the traditional vodka bloody with green onion-habanero vodka and a fiery pickled jalapeno.

It was my dining partner, though, that discovered  my new favorite brunch cocktail for summer, the  Lime After Thyme. I may never go back to mimosas now that I’ve tasted this refreshing concoction of vodka, subtle thyme syrup and tangy lime. Smooth and revitalizing, I could have spent all afternoon sipping these.

Wake up your taste buds with the Pizza Carbonara starter for brunch. A blend of mozzarella and Romano cheeses blanket a fresh and crusty flatbread topped with egg (fresh from the farm, of course), guanciale, and fresh cracked black pepper. The Guanciale, an unsmoked Italian bacon made with the pig’s jowels, is the highlight of this dish. A rich pork flavor and the lack of chewiness that often accompanies cured meats on pizzas made for a pleasant introduction to this less used cut of meat.

Entrees at Beast + Bottle’s brunch begin with the traditional but are pushed beyond expectations. The Eggs Benedict’s creamy béarnaise spread over tender, flaky gravlax made from arctic char combines for an elegant take on the classic benedict. Served with thin cut, perfectly crisped French fries (a welcome break from hash browns and home fries at brunch), this benedict stands out among the countless others served in Denver restaurants. 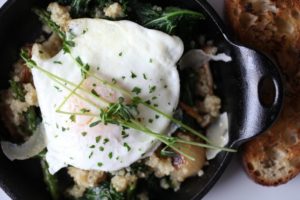 The Ham + Eggs is a meal that really exemplifies Beast + Bottle’s attention to each ingredient. The ham steak itself is tender, juicy and full of not-too-salty flavor, and it’s served alongside smooth white-corn grits and topped with a whole-grain buttermilk-chive mustard that is a tangy, savory treat. The Sourdough Waffles served with brandy plums and crunchy almond brittle offers a sweeter take on brunch, or try the freshly made pastry of the day.

Though Beast + Bottle is an eatery with a respect for meat, the vegetarian options are just as tasty. Options like the Quinoa Hash with fresh veggies and parmesan and the Falafel Sandwich with creamy baba gannoush are packed with flavor from fresh veggies and spice combinations. Most menu items can be made Gluten-Free as well.

Friendly service drives home this restaurant’s attention to detail. From the moment I walked in, I felt comfortable and cared for, a feeling that extended to each dish (and drink) I tried.  So avoid the brunch crowds and opt for relaxed conversation and distinctive flavors at Beast + Bottle.