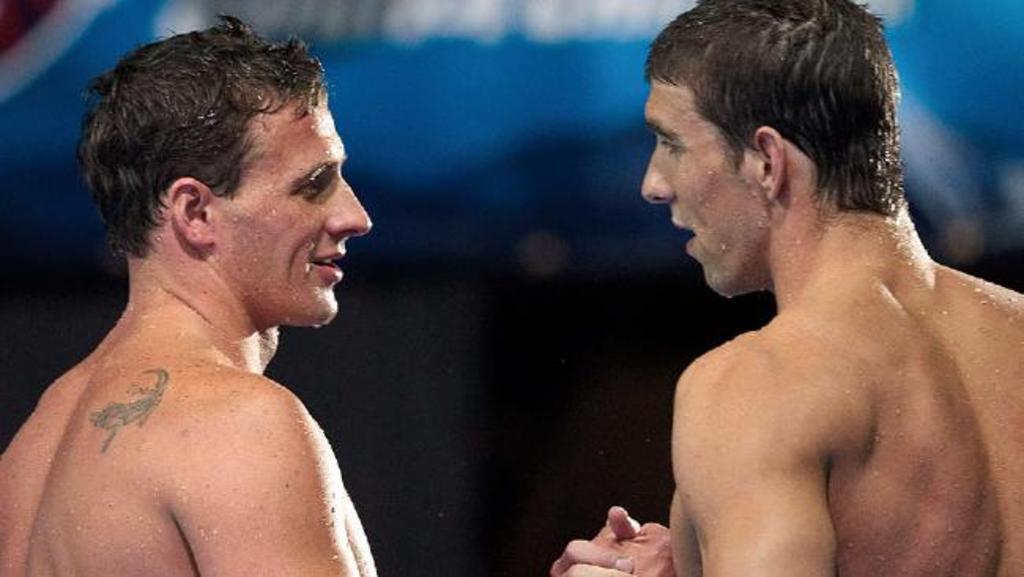 The London 2012 Summer Olympics are just about halfway done and I just can’t hold it in any longer. WHAT is America’s obsession with swimming and, more specifically, the celebrity athletes who dominate it? You know who I’m talking about. Michael Phelps (above, right) and newcomer and wannabe-Phelps Ryan Lochte. I know I might make some enemies here, especially among the ladies, but I implore you to hear me out.

Let me start with the reasons why we should be obsessed. It is one sport that we consistently medal in, thanks to Team USA seemingly having the best swimmers in the world. This year so far, we have received a total of 23 medals in the sport, 11 of which have been gold. Second to us is China who has 9 medals with only 4 golds. Somehow we’ve managed to breed better swimmers than a country that hold more than four times as many people. And everyone knows America loves to root for a winning team (and, more importantly, hates to lose). That’s a pretty darn good reason to be obsessed with swimming. But I think most of us know it goes a lot deeper than that.

If someone asked ten people to name two Olympic athletes, chances are nine of them would return with the names of these two. Unless you were talking to a feminist, in which case one of your answers might be Allison Schmidt (who is also a swimmer) or Shawn Johnson (gymnast, who is no longer competing in the Olympics). It might be a broad generalization, but there’s no denying Phelps and Lochte’s celebrity status: they’re far more than just athletes, they’re public figures. Outside of battling in the water for medals, they’ve been earning another title on the side as the most tweeted about athletes during these London Olymics, for which, like the face-off in today’s 200 IM earlier, Phelps has finally bested Lochte.

I’m not going to get on the topic of looks too much here being that, as a straight man, I’m not exactly qualified to judge, but are these guys really as good looking as the twittersphere would have us believe? Phelps looks like he flunked out of Special Ed and Lochte, well, I guess he could pass for a male model but I can’t respect a guy who thinks wearing ‘grillz’ is a good look (see right). Sure they have great bodies, but doesn’t every athlete in the Olympics? Except maybe for shooting, that is.

I guess what I’m getting at here is this: do we as Americans only care about swimming events in the Olympics because we know its one of our strongest events? Or is it simply an excuse for us to watch man meat in small bathing suits and then share our thoughts on them through every outlet possible? Judging from the state of my News Feed and Twitter this past week, I’d have to venture it’s the latter. If there’s two things America is extremely good at, it’s not losing and being obsessive (which, ironically, overlap a lot). Olympic swimming gives us a perfect excuse to do both by watching other countries lick the chlorine off Team USA’s figurative Speedos all while ogling the hunks doing it and praising them like the celebrities they’ve become. For better or worse, it certainly makes the Olympics more interesting. I have to wonder, though, with Phelps set to retire from competitive swimming and Lochte to return without him in Rio, will America care as much in 2016?