Denver’s Latin music scene doesn’t get enough credit. The Mile High City boasts tons of impressive Latin artists of all different genres and styles, from Neoma’s bedroom-pop aesthetic to iZCALLi’s hard rock/indie fusion, there are plenty of great bands to choose from. Thankfully, there are people who remain dedicated to bringing this underappreciated musical culture to the forefront of Denver’s music scene, which is exactly what Saturday night’s La Posada show at Meow Wolf represented. The first live show at Denver’s newest psychedelic art exhibit, Meow Wolf, brought some of the industry’s best local talent to the stage to celebrate a traditional Mexican Christmas holiday. Each Performer — Kayla Marque, The Mañanas, Los Mocochetes and iZCALLi — brought great energy and even better music to Denver’s most exciting new venue.

“La Posada,” which literally translates to “The Inn,” is a traditional Mexican holiday leading up to Christmas, in which people commemorate Mary and Joseph’s journey to find a safe shelter to give birth to baby Jesus. Mexico, a place deeply rooted in culture and religion, is known for extravagant, purposeful celebrations, and La Posada is no different. Everything about Meow Wolf’s sold-out La Posada event, hosted by Indie 102.3 and iZCALLi, represented the Mexican spirit and culture in refreshing ways.

First of all, let’s talk about the venue. In true Meow Wolf fashion, the space is wholly original. The stage features some castle-like models of neon pillars that function as a backlight for the performing artists while rose pedal clouds hang above the stage. The coolest thing about this venue though is the walls, which essentially function as an art exhibit all on their own. Throughout the show, the walls lit up in all sorts of different colors and shapes, creating a multicolored forest landscape full of twisting trees and jungle scenes. It was a truly immersive experience. 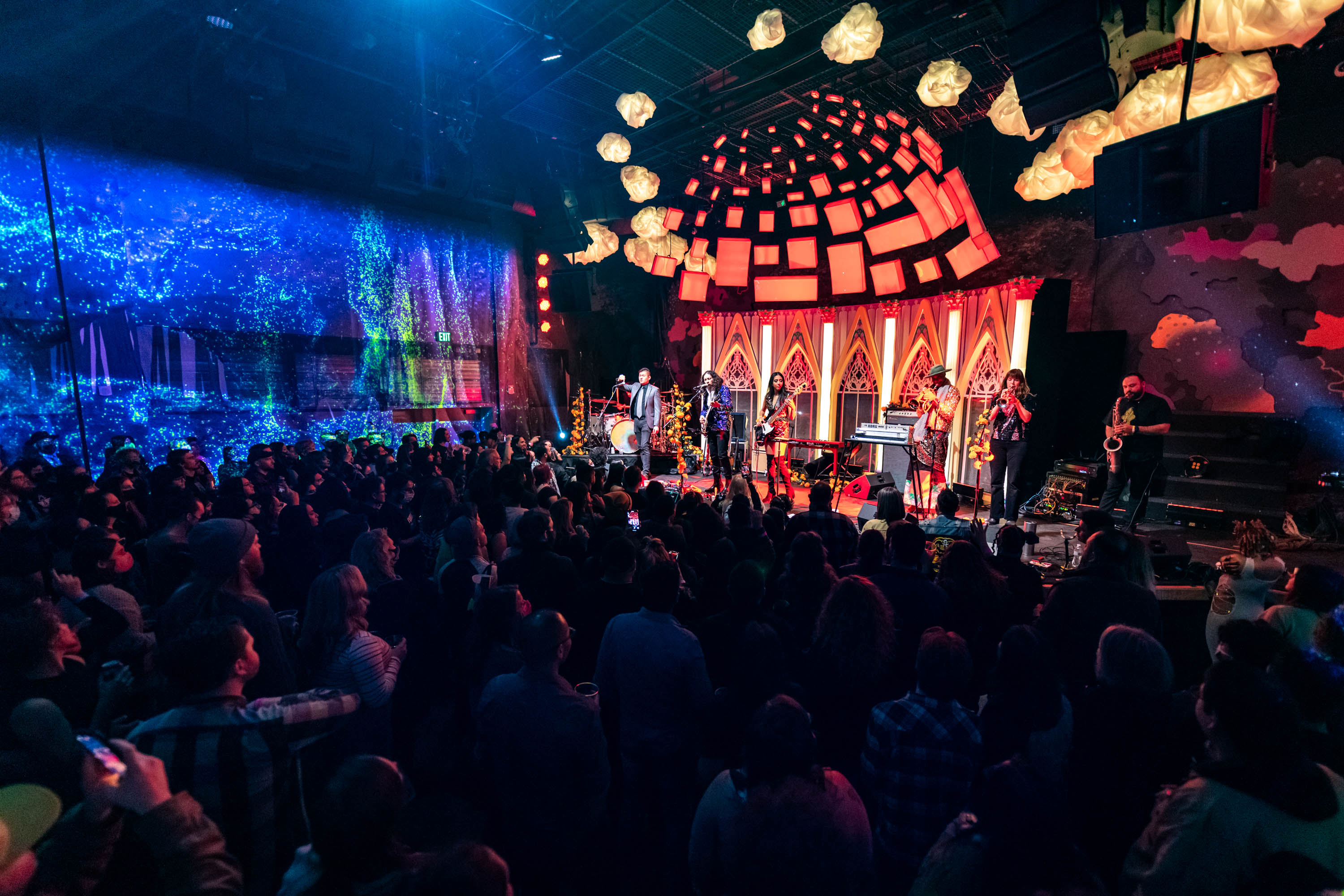 Most importantly, though, was the music. Kayla Marque started the night off with her smooth pop R&B, a perfect opener to ease the crowd into a night of high-energy performances. She was completely comfortable on stage, showing off some flashy red and gold boots and groovy Lady Gaga-inspired glasses. Her band was tightly knit and maintained a great flow throughout the opening performance.

Next up, The Mañanas took the stage. A relatively new Denver band, The Mañanas continue to impress their audience with increasingly charismatic performances and light-hearted indie music. Although the group started off performing as a duo, they recently recruited Denver Latin pop star Neoma on the bass and Civil Engineer’s Aaron Way on the guitar. The newly-formed live band clearly had musical chemistry and knew how to work the crowd. The band played some favorites like “Don’t Think Your Love Has Given Up” and “Lucia” which gave room for each band member to shine in their own way. However, Brandon Upingo, the band’s lead singer and frontman, stole the show. His unique voice and quiet charm, combined with a playful demeanor and classic indie-boy fashion worked in tandem to create a delightful energy that radiated across the crowd, which never stopped dancing and begged for an encore as the band walked off stage.

Los Mocochetes followed The Mañanas performance and amped the energy up to 10. Sonically, Los Mocochetes delivered a performance that represented the spirit and sound of traditional Latin music in every way. There were bongos, 12-string guitars and even a mini-trumpet. Each member dressed in flashy Latin attire, boasting white ponchos, wide-brim fedoras and colorful vests. Everyone gave their all for a great performance filled to the brim with creative and wild energy. They had the crowd in the palm of their hands as members jumped into the crowd and interacted with their audience during their song “Qué Vivá la Revolución,” a highlight of their performance. 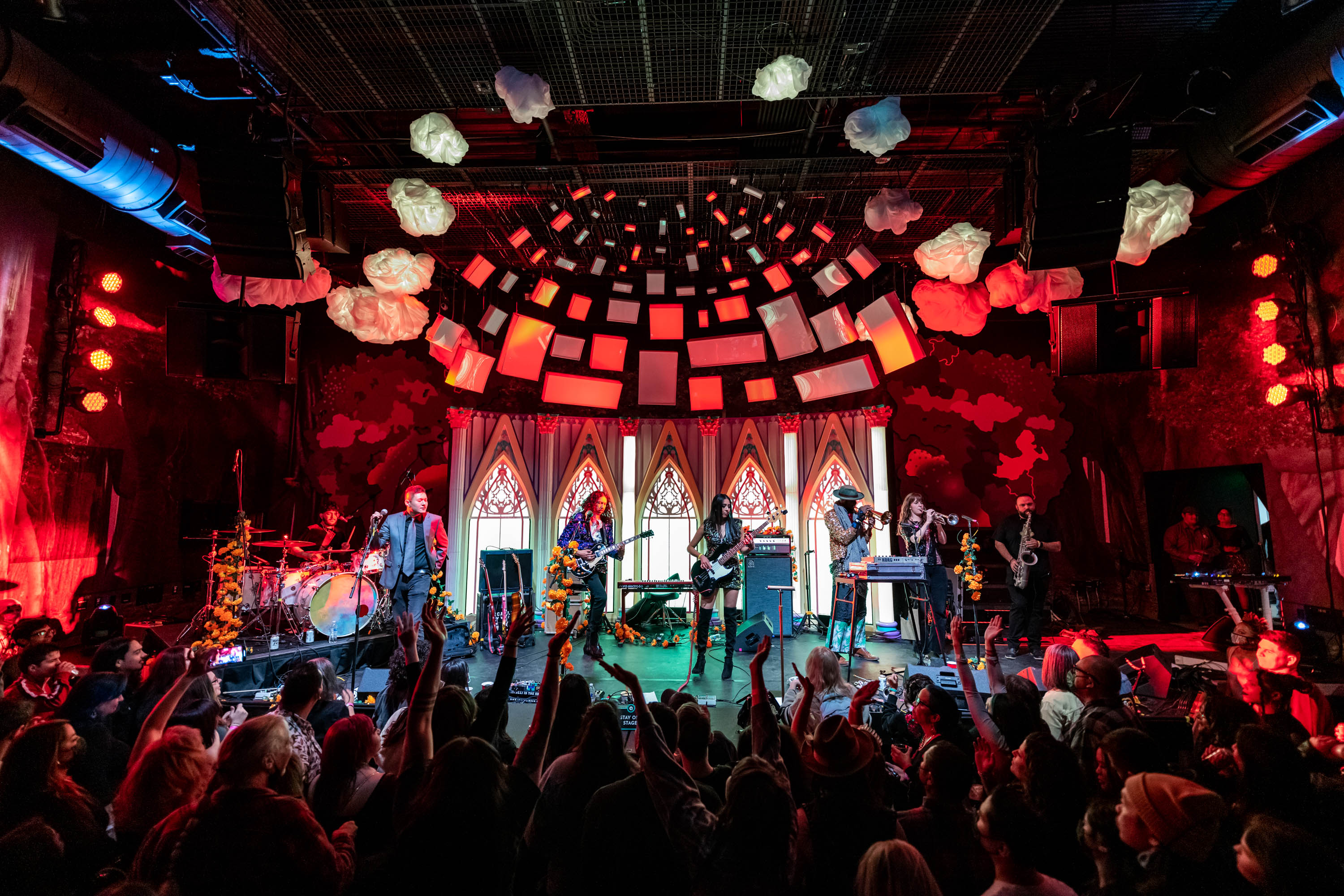 Last, but certainly not least, the driving force behind this Mexican celebration, iZCALLi, took the stage to finish off the night. Their music is wild and pleasantly loud, challenging the conventional sounds of Latin music with some grimy guitar solos and slightly-distorted vocals. They performed songs in English and Spanish, although most of their songs were more about the music than the lyrics. iZCALLi is a truly eclectic band, in both ethnicity and musical talent.

While Miguel Aviña’s guitar and vocals often took center stage, their performance was filled with opportunities for violin and trumpet solos, which added an extra flair to their already stylistic performance. As the performance went on, Meow Wolf’s unique production really shined as the light and sound crew amped up the creative effects. The walls exploded with colors and morphing jungle scenes while the psychedelic backdrop of neon pillars and floating rose pedal clouds lit up with extravagant blues and pinks. The music picked up alongside the production, amounting to a crazy climax of impressive musicality as the crowd exploded into a wild dancing frenzy before the band eventually said goodnight.

La Posada was Meow Wolf’s first live performance (aside from DJs), and the fact that the venue invited Denver’s top Latin bands to break in the new venue speaks volumes about Denver’s support for the Latin music community, and for good reason. There’s so much talent surrounding Denver’s local Latin bands, and although the scene has always been an important part of Denver’s musical culture, it’s only just beginning to get the recognition it deserves. La Posada was proof of that.

All Photography by Andrew Rios