“We gotta get back to the old ways of eating,” Zach Parini said to me as we sat on a wooden bench in his restaurant, Pizzeria Lui. He had paused in the middle of our interview, shaking his head wistfully as he pined for simpler times. “We don’t need bread that’s mixed, proofed, baked, bagged within, like, a six-hour time period. Let’s take some time and bake some good bread…Let’s get back to slowing down a little bit.” It’s this reverence for technique and willingness to be patient that has some calling Pizzeria Lui the best pizza in the Denver area.

Pizzeria Lui blends in on Mississippi Ave between a dive bar and an apartment building. Even the billboard is rather subtle, with simple lettering and a minimalist pizza icon. But it’s substance over style at this modest pizzeria, and Parini takes the substance of his pizza very seriously. 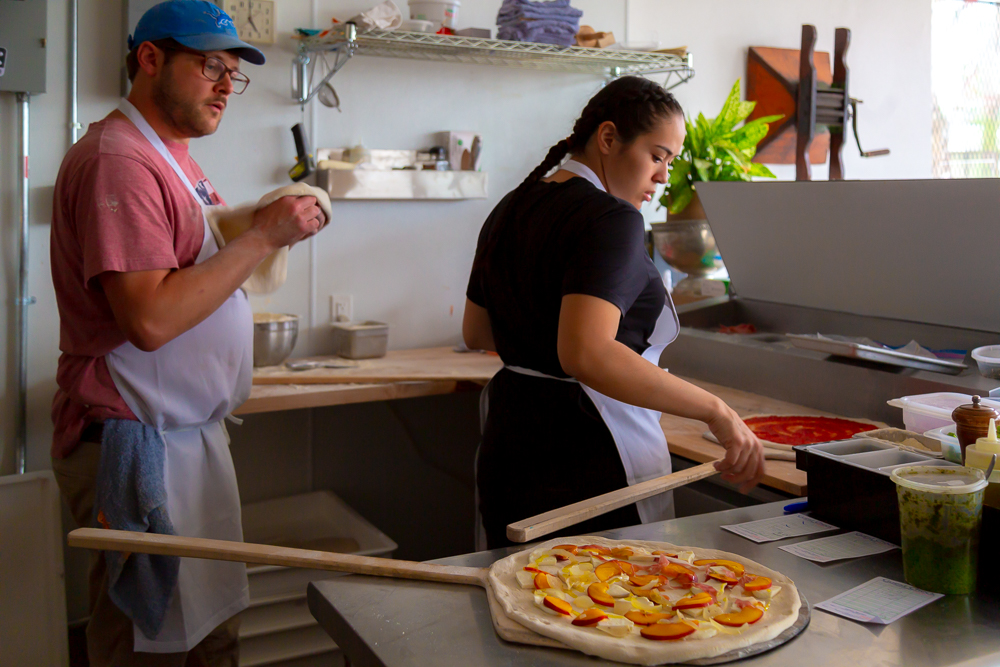 From the organic flour he uses to the Bianco di Napoli tomato sauce to the fresh local produce and the Diablo salami from Il Porcellino Salumi, ingredients are of the utmost importance to Parini – an appreciation that was instilled in him from a young age.

“My dad and his best friend, Frankie Saladino, they would make sausage and since I could stand up I’ve been pushing meat through a grinder,” Parini reminisced. After the last visit with his dad, he added The Mamacita ($18) to his menu. This pizza features his dad’s homemade sausage, mama’s lil peppers, ricotta, mozzarella, pecorino and oregano.

In addition to his upbringing, Parini credits the quality of his work to technique. He learned the importance of technique working in fine dining and at the Grateful Bread Bakery.

“You can learn about cooking all you want, but if you don’t know how to take care of the ingredients, you’re starting an uphill battle,” he said.

Not only does he search for the best ingredients, but he also prioritizes finding the right ones for his menu and he changes his offerings if the ingredients aren’t quite right. Regulars may have noticed that the Lui ($16) changed from salami to sausage for a year or so and has recently returned to salami. That’s because the salami wasn’t quite right so he stopped serving it until he could find one that fit perfectly.

He also started making homemade sauces to compliment the main dishes. “I spend so much time on the pizza, I’d rather make hot sauce that I feel is on par with the pizza,” he explained. He offers complimentary hot sauces – fresno chili, habañero or half and half – as well as homemade spicy honey for anyone who wants it. The bottles are available for sale for any die-hard fans out there as well.

We all know this last year hit the restaurant industry hard and places were doing more to-go service than ever.

“I was doing so many pizzas at once, during COVID, because a lot of people were at home…ordering earlier,” said Parini. “People were getting frustrated because we only had one phone line.” Not only were people frequently getting a busy signal, but when they did get through the wait time was getting longer and longer.

“It’s better eaten right out of the oven before it gets into a box and it sets up a little bit. Once it sets up it softens a lot,” he says, explaining the recent change to an electric oven. 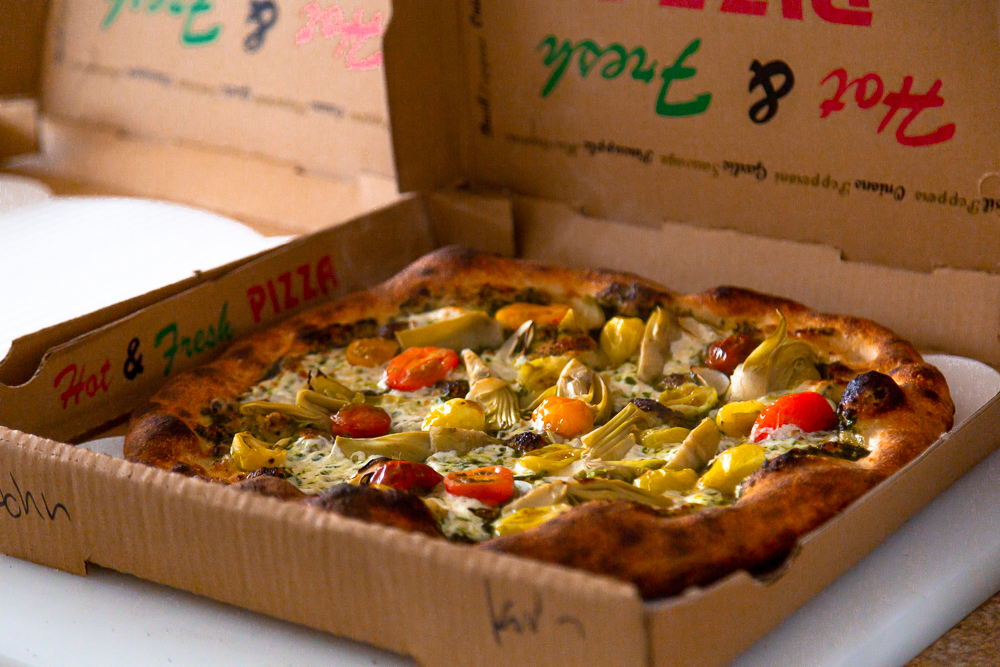 With the new oven he can make upwards of 15 pizzas at a time and the quality is still excellent. “Obviously it’s not wood fire and it’s not going to be the exact same,” he admitted. “But the ingredients are the same, pizza dough is the same, everything is pretty much the same. It’s just…a little crispier.”

Parini hopes to expand eventually to have both a wood fire and an electric oven. For now, though, the pizzas take time and there are only so many. But that doesn’t keep the customers or the positive reviews from rolling in. Parini tries not to read the reviews, but I took the liberty of looking through them myself. As recently as this week people were calling Pizzeria Lui the best pizza in the Denver area. Locals understand that good food takes time. 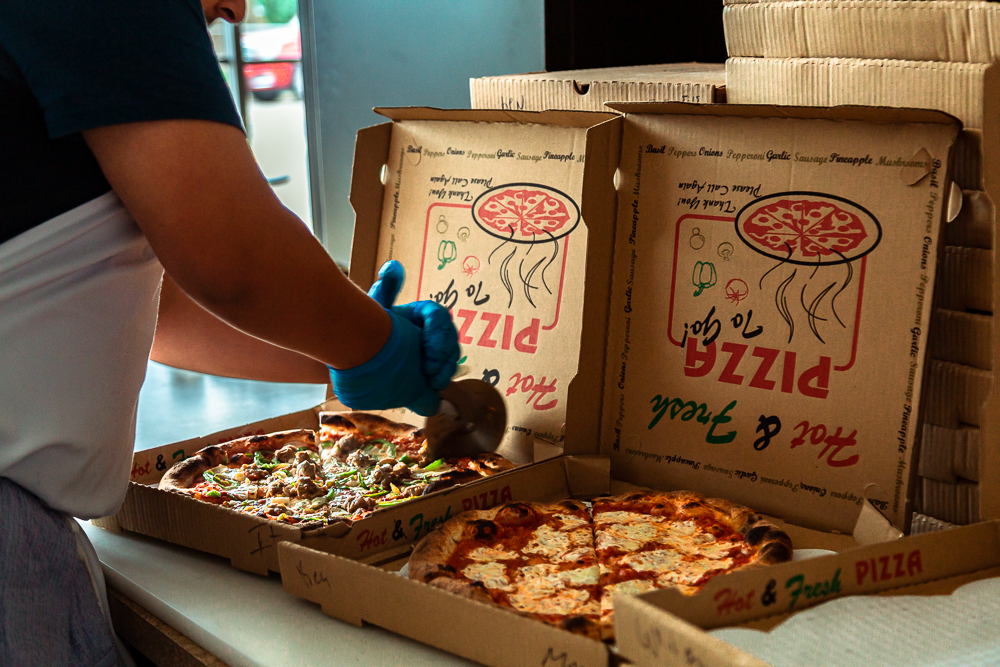 There’s a little something for everyone on the menu at Pizzeria Lui. Those looking for simple have their pick of classic cheese ($13), pepperoni or sausage ($14), while those feeling more adventures can try the Street Taco Pizza ($18) or the Peach Pit ($19).

The street taco was a special for Cinco de Mayo that proved so popular it became a permanent menu item. Mimicking the flavors of an actual street taco, this pizza features homemade chorizo, homemade tomatillo salsa, cotija and fresh corn.

The peach pit is a seasonal summer pizza and local favorite that was added to highlight Palisade peaches. It features fresh peaches, crispy prosciutto, fresh mozzarella, ricotta, pistachio, arugula and spicy honey. Though the pizza is added to the menu as soon as Parini can get decent peaches, the goal is to feature the Palisade variety. As soon as ripe Palisades are available – which should be any day now – you can try them on this pizza.

Though he is generally a “classic cheese guy,” Parini happily adds popular flavors and items to the menu. He even loves the controversial pineapple on pizza. He puts his own spin on the classic Hawaiian ($17), however, by roasting the pineapple and turning it into a puree – giving the pizza a smokier flavor.

“I don’t want to be pretentious when it comes to pizza and say ‘You can’t do this.’ Whatever you want to put on a pizza is fine by me.”