During an afternoon press conference, Governor Jared Polis officially issued a statewide mask mandate. It goes into effect at midnight tonight and applies to everyone over the age of 10. This comes after Polis has urged citizens to “wear a damn mask,” calling those who don’t “selfish” while simultaneously saying such a statewide mandate would be unenforceable. But in today’s conference, Polis referenced a “significant uptick in the last few days” in cases as well as new surveys showcasing the effectiveness of mask mandates as a reason for the change. Below, we outline everything you need to know about this new order and today’s press conference

What Exactly Is The Mandate? 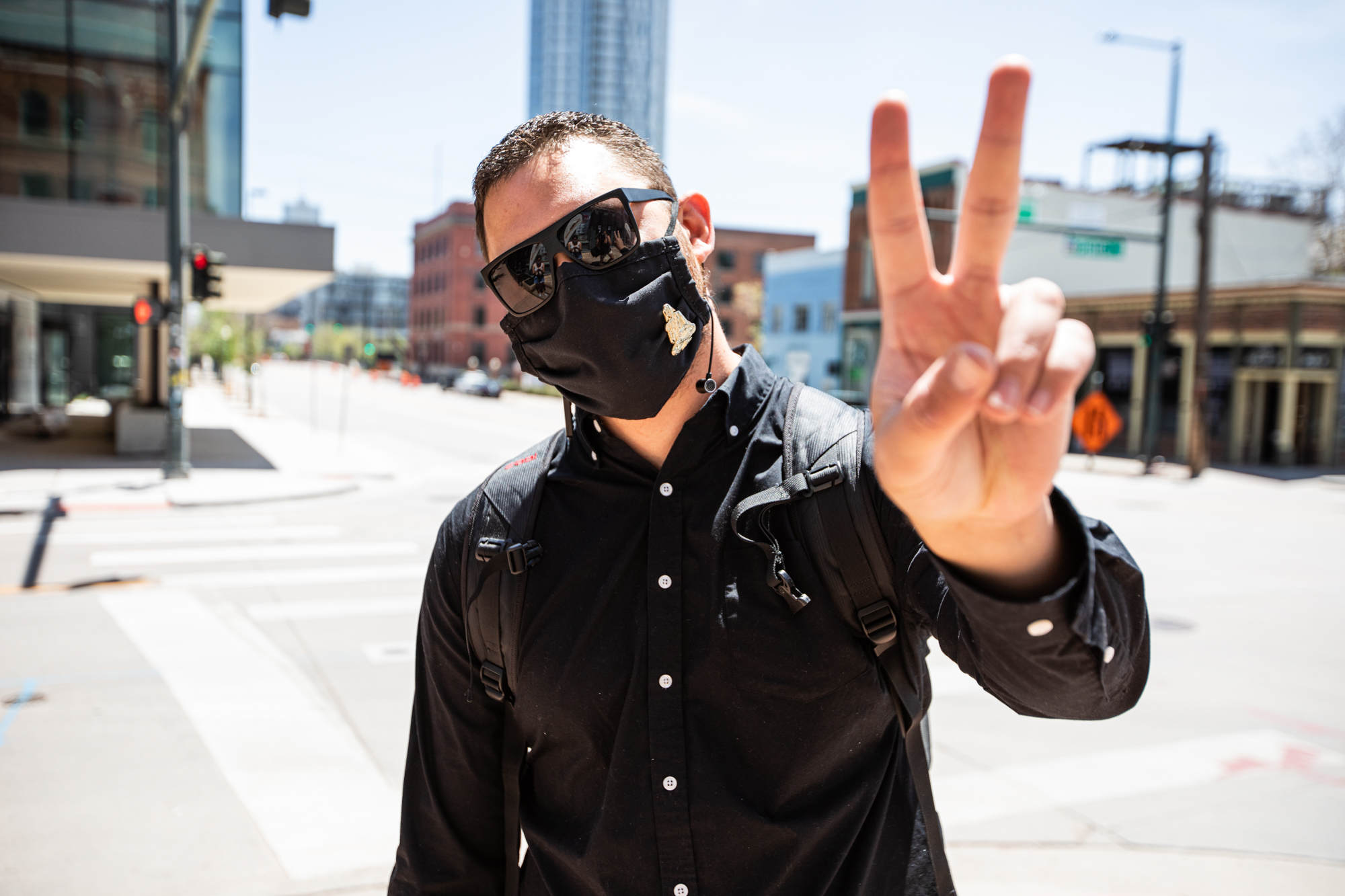 Governor Jared Polis signed an executive order that goes into effect tonight, July 16, 2020, at midnight that requires all individuals in Colorado over the age of 10 to wear to a non-medical face covering over their nose and mouth when entering or moving within any “Public Indoor Space” or waiting to take a taxi, rideshare, bus or similar service. It is set to expire in 30 days unless extended by executive order.

According to the order, ‘Public Indoor Space’ means “any enclosed indoor area that is publicly or privately owned, managed, or operated to which individuals have access by right or by invitation, expressed or implied, and that is accessible to the public, serves as a place of employment, or is an entity providing services. Public Indoor Space does not mean a person’s residence, including a room in a motel or hotel or a residential room for students at an educational facility.” 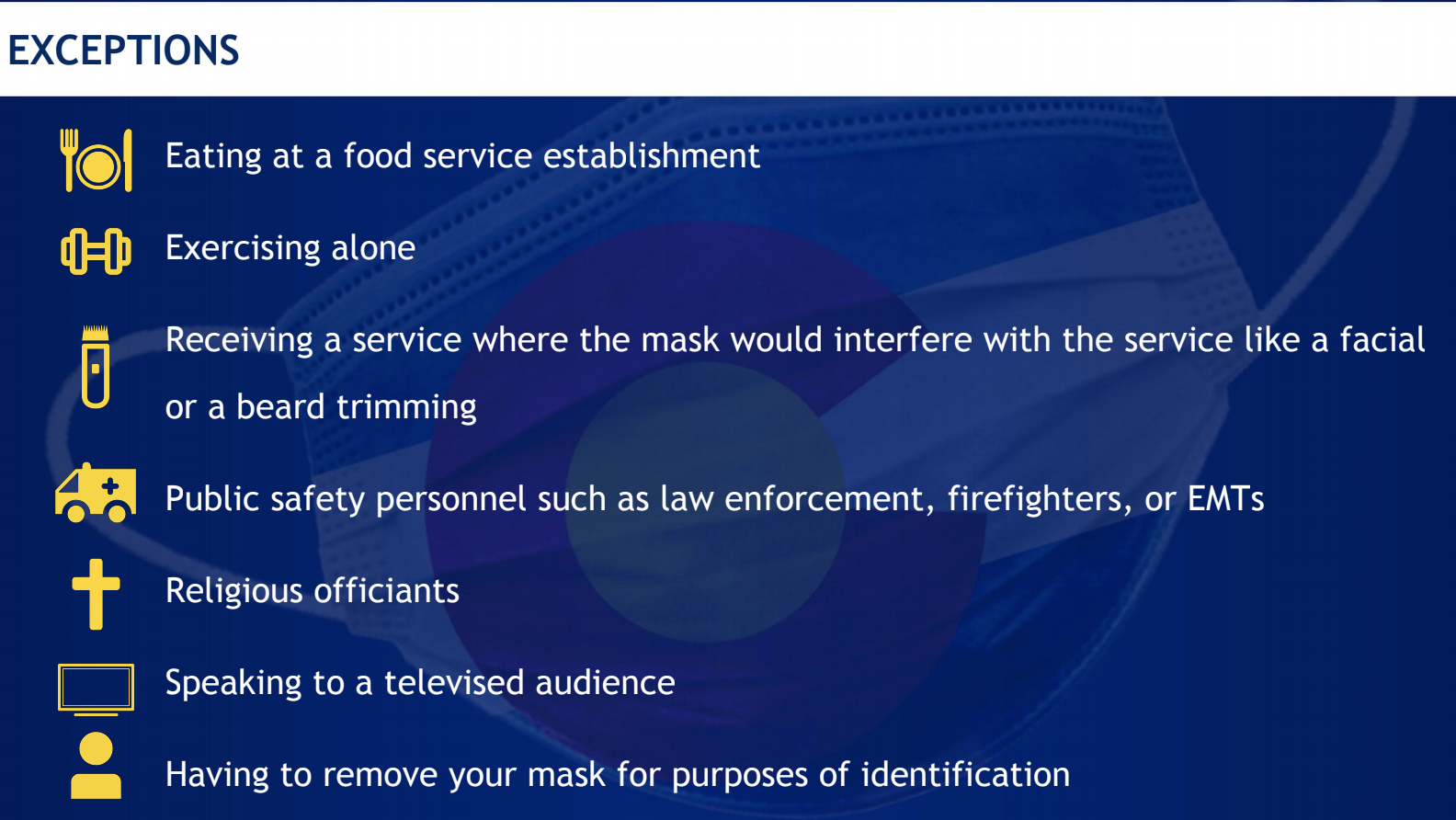 Governor Polis also announced that Colorado has received enough medical-grade masks to give to Colorado teachers. The plan is to give at least one medical mask per week per teacher. Additionally, any new variances for counties will be put on pause.

During the press conference, Polis was joined by two city mayors including Aurora Mayor Mike Coffman and Denver Mayor Michael Hancock. Coffman went on record to explain that — while he previously disagreed with a state order — the rise in cases and hospitalizations has changed his mind. “Now it’s different and now I’m worried,” he said. Both mayors, as well as the governor, expressed the mask mandate is meant to help keep the economy open and avoid any future shutdown. Mayor Coffman, summed up the sentiment with the following:

“I get some people are going to say this is a hardship, but let me tell you this I meet small businesses every day that haven’t been able to open up, and then if things get worse they will have their businesses shutter again, that’s a hardship. Children not being able to go to school, that’s a hardship. We need to put it in context as this is the least invasive approach that we can do at this time as a preventive strategy. We have got to get children back to school, we’ve got to open this economy and that’s what I fear the most, the inability to do that and that’s why I am here supporting the governor.”

Hancock clarified that while the concern is there, a return to a stay-at-home order is not in the works and that “it would have to get tragically bad for us to have to reinstitute a stay-at-home order.” Polis ended the conference with a dire warning explaining, “We are really on the knife’s edge … the party has to end if we are going to keep our businesses open and our economy alive.”