RiNo has been a rapidly developing neighborhood for years now, with murals and graffiti that come and go as buildings are demolished and rebuilt. At times, this tumultuous atmosphere has pitted street artists against building owners and developers. The story is the same in other street art meccas, like 5 Pointz in New York City, and recent court decisions based on the white-washing of 5 Pointz have validated the value of street art and graffiti.

But one Denver street artist proved this past weekend that these kinds of decisions don’t have to be made in court. Pat Milbery — founder of artist collective So-Gnar Creative Division and a practiced muralist in Denver and beyond — worked hand-in-hand with building owner Sean Campbell to save one of the “Love This City” murals from imminent destruction. 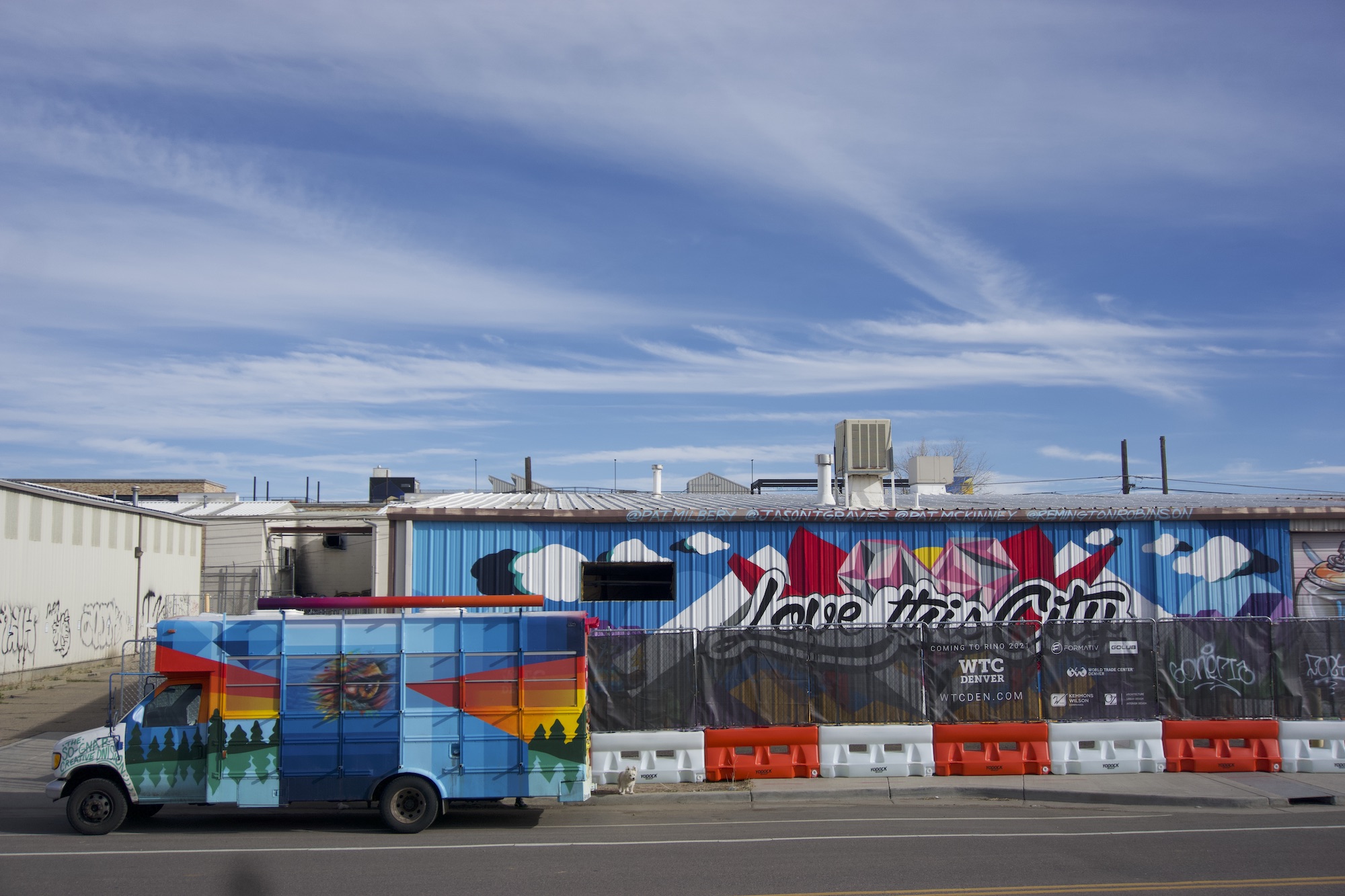 So-Gnar van in front of the “Love This City” at 38th and Blake. Photo by Andres Delgado

Located on 38th Street and Blake Street in RiNo, this particular mural was part of a four-part series scattered across the city and sponsored by VISIT DENVER. Each one featured the words “Love This City” as well as the signature vibrant colors of any So-Gnar Creative Division creation.

Milbery worked with three other artists — Remington Robinson, Jason Graves and Pat McKinney — to complete the mural series nearly five years ago. Since then, Robinson and Graves parted ways to pursue their individual art careers while McKinney and Milbery occasionally still collaborate.

READ: These Four Denver Street Artists Are Painting This City With Love

When Milbery learned about the planned demolition of the building on 38th and Blake Streets, he jumped into action. “Sean and I worked together on a plan to make sure the art is preserved,” Milbery commented. “The mural really meant a lot to a lot of people so I didn’t want to see it go and I wanted to also prove that you can work with locals and developers to create positive proactive ways to keep art involved in the community.”

Luckily, the mural was painted onto corrugated metal that was affixed to the building. Unlike another instance where a local street artist’s mural was saved from destruction inside Stanley Marketplace on a structural wall, this mural was painted on panels that just needed to essentially be unscrewed. And Milbery was willing to do the hard work himself.

“We pulled the entire panel off the building, grinded the screws out of it and sliced the entire gutter off the top to free it from the wall,” explained Milbery. His roommate, Andres Delgado, documented the entire process and lent a helping hand, along with Campbell’s wife Kimberly.

So what will replace the building that this mural was on? The new World Trade Center Denver. Campbell has been spearheading the project for the last two years with the RiNo-based company Formativ.

For now, the mural is ready for a new home. That location is pending, with more details soon to be released — although there is hope that Campbell will incorporate it into the World Trade Center. But the good news is that a well-loved mural that touted its love for this city lives another day, despite its original canvas now lying in a heap of rubble.