Patrick and Mimi Ryan hosted graffiti parties in Denver before people felt comfortable saying they liked graffiti. Their art gallery, GOOG, which operated from 1994 to 2005, was located first in Downtown where they hosted local graffiti writing pioneer Tuke for a live painting event. Then, GOOG moved to the Art District on Santa Fe in 1997 — and Patrick couldn’t stand to leave the Tuke wall to be destroyed by future owners. So he cut it out and moved it with the gallery to the new location.

READ: After a Decade in Prison, an Influential Denver Graffiti Writer Finds His Groove Again

At that time, the Art District on Santa Fe was a fraction of what it is now — Patrick remembers the First Fridays, where GOOG and a few other galleries had open bars and bottles of wine for late-night art lovers. For nearly a decade, he watched as the neighborhood grew and changed — including the increasing number of spray painted creations in the back alleys.

When GOOG closed its doors, Mimi and Patrick started focusing on artistically designed experiments — furniture, events, installations — calling their new venture Industrial Luxury. It seemed like their paths were moving away from the street art scene — until Patrick completed some architectural work at Stanley Marketplace. That led to Industrial Luxury starting a pop-up shop inside Stanley, which then led to the pop-up needing a permanent space. That space was behind a wall that acclaimed street artist Thomas “Detour” Evans painted a mural on. 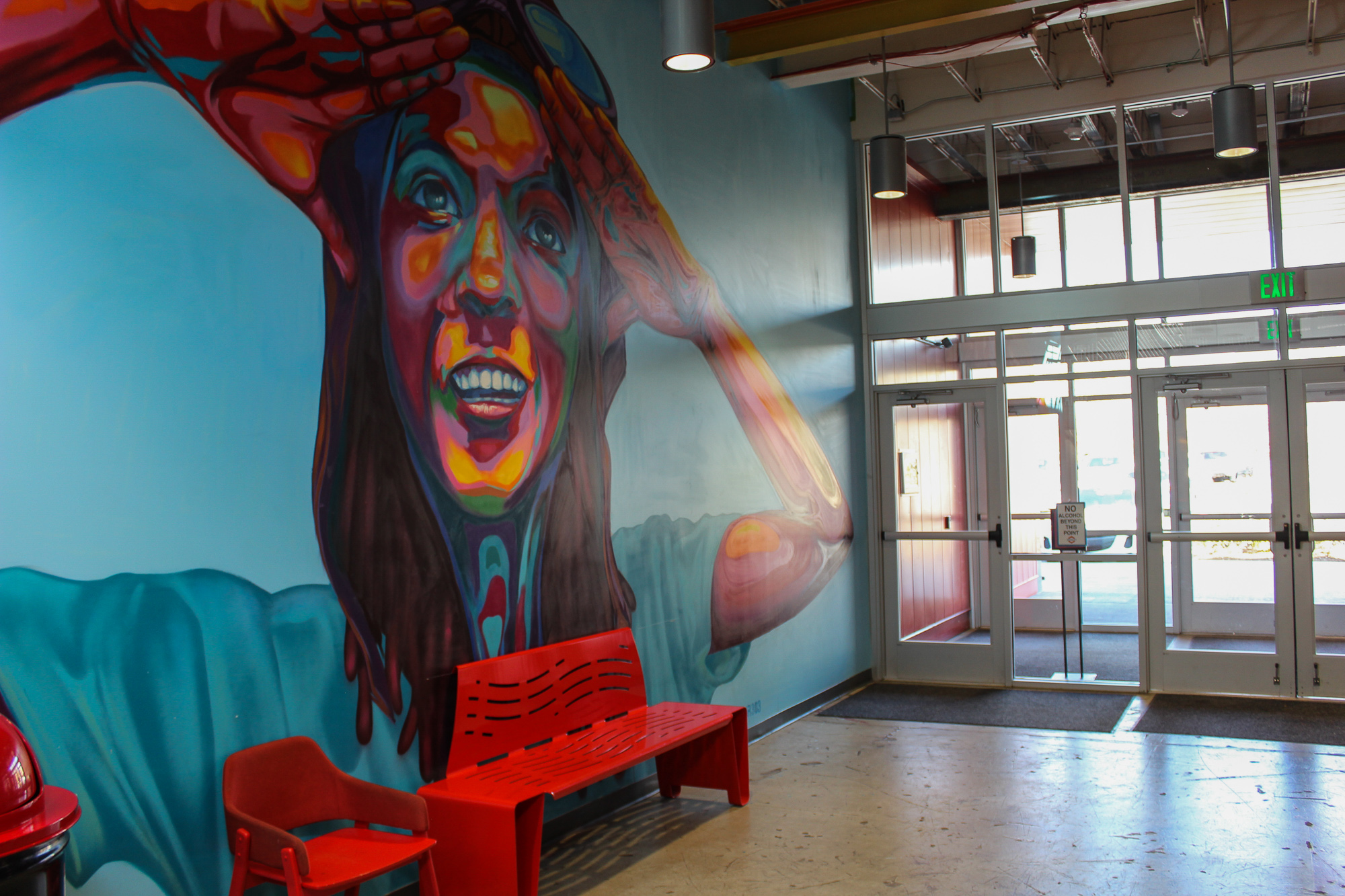 There are nearly a dozen murals inside Stanley, and Detour’s piece was one of the first. It pictured a young girl holding her hands above her eyes, wearing Amelia Earheart-style goggles, surrounded with a sky blue background. “It was modeled after one of my friend’s kids,” Detour remarked, “and it was a little experimental at the time for me.”

Originally, when he painted it, the space behind it was part of a yoga studio. The studio downsized, freeing up an entire room for another business — but the problem was that the new business would need to create a separate entrance. Patrick admires Detour’s art, and when he realized the new home of Industrial Luxury would replace one of Detour’s murals, he started thinking creatively.

All photos of the installation are courtesy of Patrick Ryan.

“People told me it couldn’t be done, but I insisted on trying,” Patrick remarked. “I cut all of the studs with a sawzall on the top and cut through the screws holding everything into the concrete pad on the floor,” he explained. After disengaging the studs, Patrick sliced the mural into three panels (making sure to save Detour’s signature and Instagram handle as a separate piece) and moved them into custom metal braces he welded himself. The entire process took Patrick several weeks — but all of the hassles were worth it.

Even without the ability to cut apart a wall and move it while maintaining a piece of art painted on its surface, Patrick is a handyman and an artist himself. Industrial Luxury sells ready-made pieces of furniture he’s created on his own, and he plans on holding welding classes at some point due to popular demand. He and Mimi are hopeful to once again host art events, like in the days of GOOG, and are even more hopeful to showcase more of Detour’s art.

“Oh wow,” were the first words out of Detour’s mouth when we all turned the corner and saw the newly installed triptych mural. “This is nice.”

Patrick was, quite frankly, afraid to tell Detour or tag him in any social media posts during the process. So until last week, Detour was unaware of any change to his mural. “I didn’t want something to go wrong and then be the one who ruined one of your murals,” Patrick told Detour when the two met inside Industrial Luxury on May 23. But instead of ruining it, Patrick gave the aging piece a new life.

“As a street artist, you expect your pieces to be temporary,” Detour kindly explained. And it’s true — street art is inherently temporary. When we fall in love with a mural in RiNo, we expect it to be painted over within a year. Artists who contribute to the street art scene either know this and accept it, or struggle with the fluidity of the culture. In this case, Patrick prolonged the life of Detour’s mural which, if any other business had moved into that space, may have been gone forever.

Industrial Luxury is located inside Stanley Marketplace at 2501 Dallas Street in Aurora.