Jam-packed with artful displays, the streets of Denver use urban landscapes such as the city’s alleyways, buildings, and garage doors as the perfect canvas. But there is a different canvas used out in eastern Colorado to exhibit colorful murals.

Driven by their love for art, a spiritual connection with God and a passion for their communities, a group of young women have set out to achieve their dreams of painting the eastern plains one mural at a time on every grain elevator that greets the horizon.

How it all began 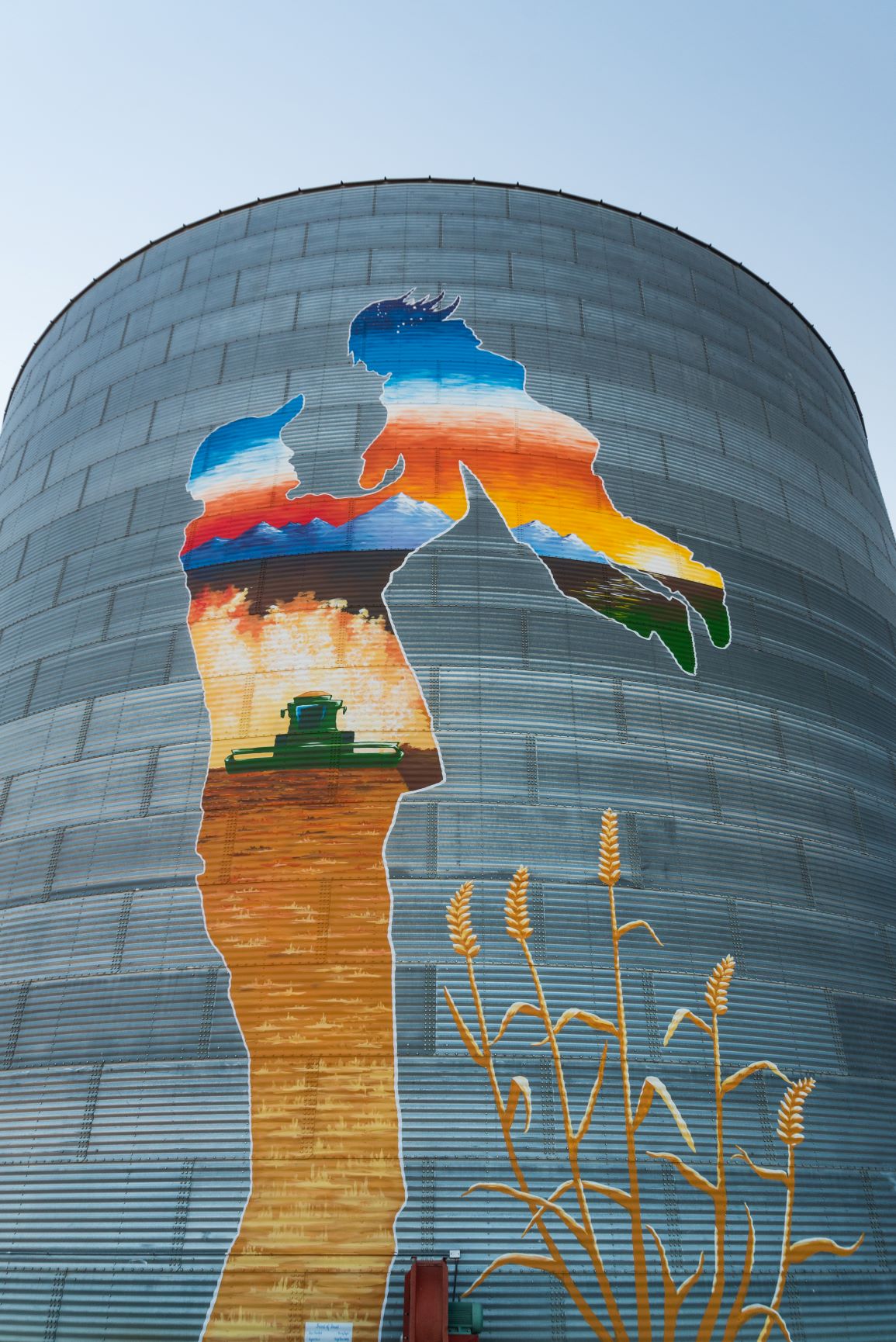 Staci Beauford, who has always had a passion for art, was asked to paint an American flag on the side of a propane tank in Limon after someone had taken notice of the flag she had painted at her family’s farm. After, she was soon commissioned by the mayor of Limon, Julie Coonts, to create and paint a mural that captured the essence of their rural community on the side of a large grain elevator in town. Beauford sought out help from her sister Kayla Ravenkamp and cousin, Audrey Sayles to complete the project.

Attempting to speak to the modern farmer, their first mural, Heart of Harvest, depicts the outline of a man and a little girl filled with scenes of rural Colorado coming to life. To prepare their canvas, the process began by power washing the side of the grain elevator and scraping the galvanized metal. Next, they hired Space Farmer Productions in Denver to help them with the 60-foot tall silhouette, creating a larger-than-life outline. They placed the primer, and they began painting. To reach the highest heights, the women used a bucket truck to complete the project in just one week. Upon completion, Heart of Harvest sparked a fire in the community and in themselves, and they haven’t looked back since.

“We didn’t know the community needed it. We thought we would just do one and done,” said Sayles about Heart of Harvest. In a town where more than half of its income comes from the gas stations that fill the area, Limon’s residents crave something exactly like this. But thanks to the women of Some Girls and a Mural, as they now call themselves, Limon is now home to beautiful artwork that offers something else to look at besides a chain hotel or gas station. 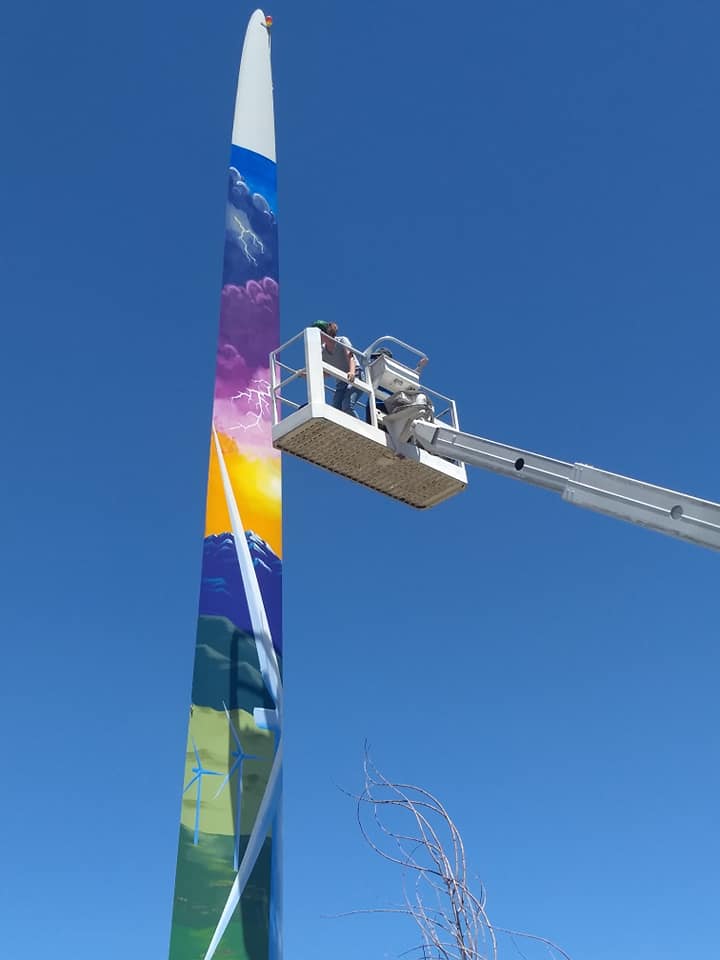 Painting the wind turbine blade at the Trailing Edge RV Park. Photo by Some Girls and a Mural Facebook

While their mission is to paint every grain elevator along the eastern plains, they have dabbled with other platforms for their work. Standing tall at the entrance to the Trailing Edge RV Park in Limon is a colorful mural painted on an old wind turbine blade. Struck by lightning during transport, they deemed the blade not usable. Because there is no way to recycle these massive pieces of equipment, they decided to turn what would be garbage into art. You can see the mural from Main Street or get a closer view along the walking path near the RV park.

Another mural painted on the side of a propane tank at DJ Petroleum is a tribute to a WW II veteran who lives in town. 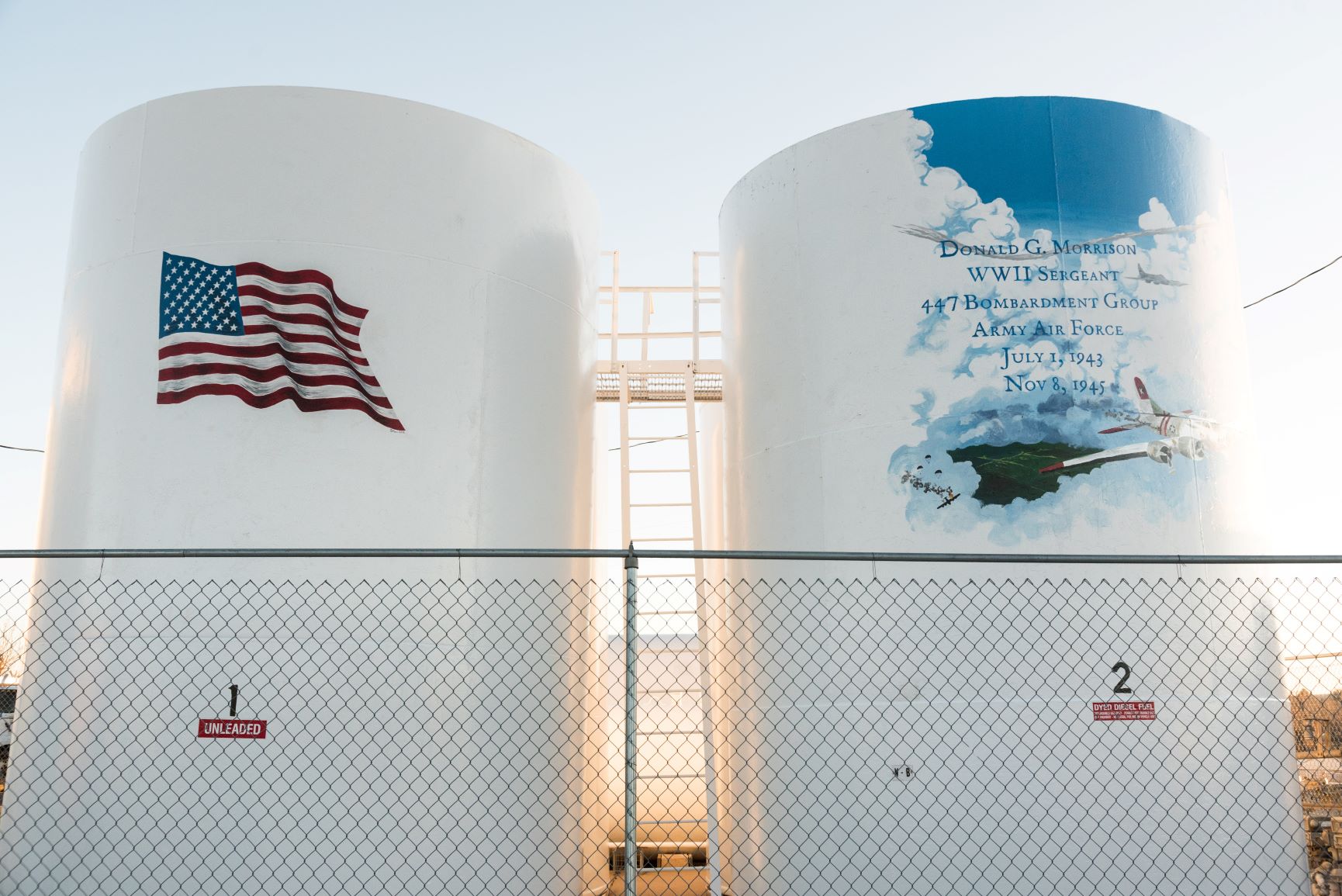 Outside of Limon in the town of Hugo, the county seat of Lincoln County, travelers will find another one of their creations on the town’s welcome sign along Main Street. The mural paints the highlights of Hugo with images of the historic railroad and roundhouse, the resident turkeys and the rodeo queen who makes an appearance during the Colorado Championship Ranch Rodeo.

Looking into the future

Since June of 2018, they have created more than 15 pieces and don’t plan to stop there. To accomplish their grain elevator goal, they have submitted a grant through the Colorado Prairie Arts and Music Council for enough funding to do exactly that. If approved in April 2020, these three women will set out on their journey to paint the plains and give travelers and residents of Colorado a reason to stop and admire the artwork that has made its way out east.

While we Denverites look to alleyways, the side of coffee shops and museum walls, Some Girls and a Mural have now given us a reason to stop and admire the high rises of the eastern plains.