Meow Wolf as a brand has become a cultural tour de force. Known to most for their eccentric Santa Fe funhouse and music venue, House of Eternal Return, Meow Wolf’s legacy is that of DIY extremism. The artist collective and incubator whose forthcoming Denver outpost will officially open in 2021, returned to the Mile High City this past weekend to test the waters of its fandom and following with a new concept — the Dark Palace. In classic Meow Wolf fashion, the collective took over the unlikely National Western Complex for an underground rave, as only they could imagine. Featuring an array of local and national artists of differing disciplines alongside an eclectic electronic whos-who of a lineup, the weekend-long Dark Palace was an adventure into the outlandish. 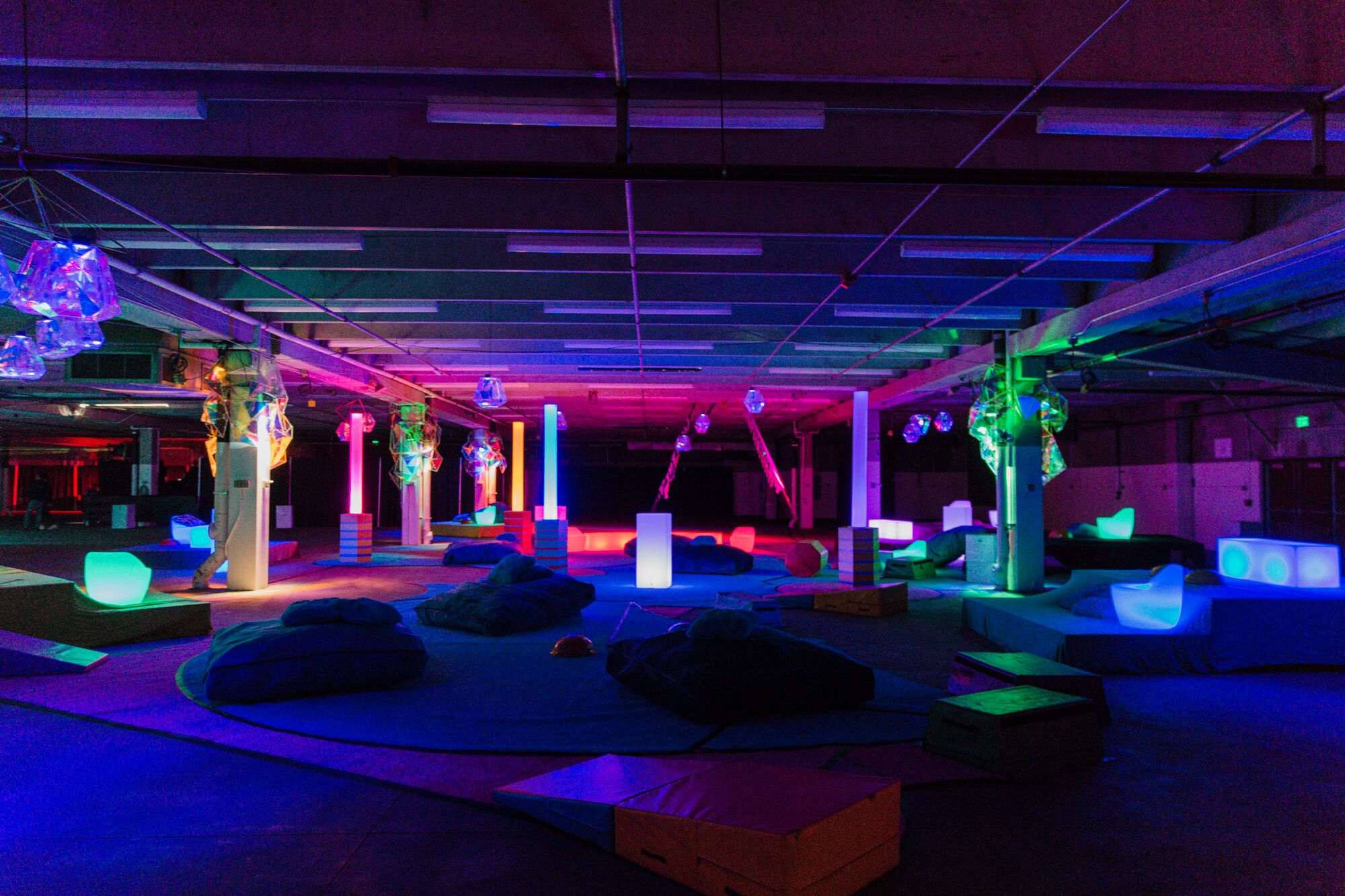 Converting the National Western Complex into an immersive rave was no small undertaking. The 110-year-old property is sprawling in scope, offering plenty of exploitable spaces for the Meow Wolf minds to work magic. To take advantage of the space, Meow Wolf overwhelmingly employed a bevy of light artists to contour the darkness. Collin Parson provided gorgeous portals across the venue’s “Chill Zone,” an area replete with neon hues and obtuse furnishings away from the commotion of the dance floors. Rather than illuminate attendees, the portals cast each passerby in stark contrasting shadows allowing the light to reach the space instead. Sean Tanner brought a touch-sensitive LED triangular prism that begged for interaction as fans entered the venue and Denver Digerati, AudioPixel and Laleh Mehran & Chris Coleman brought animations and projections to rooms and stages alike creating moments of pause throughout the venue. 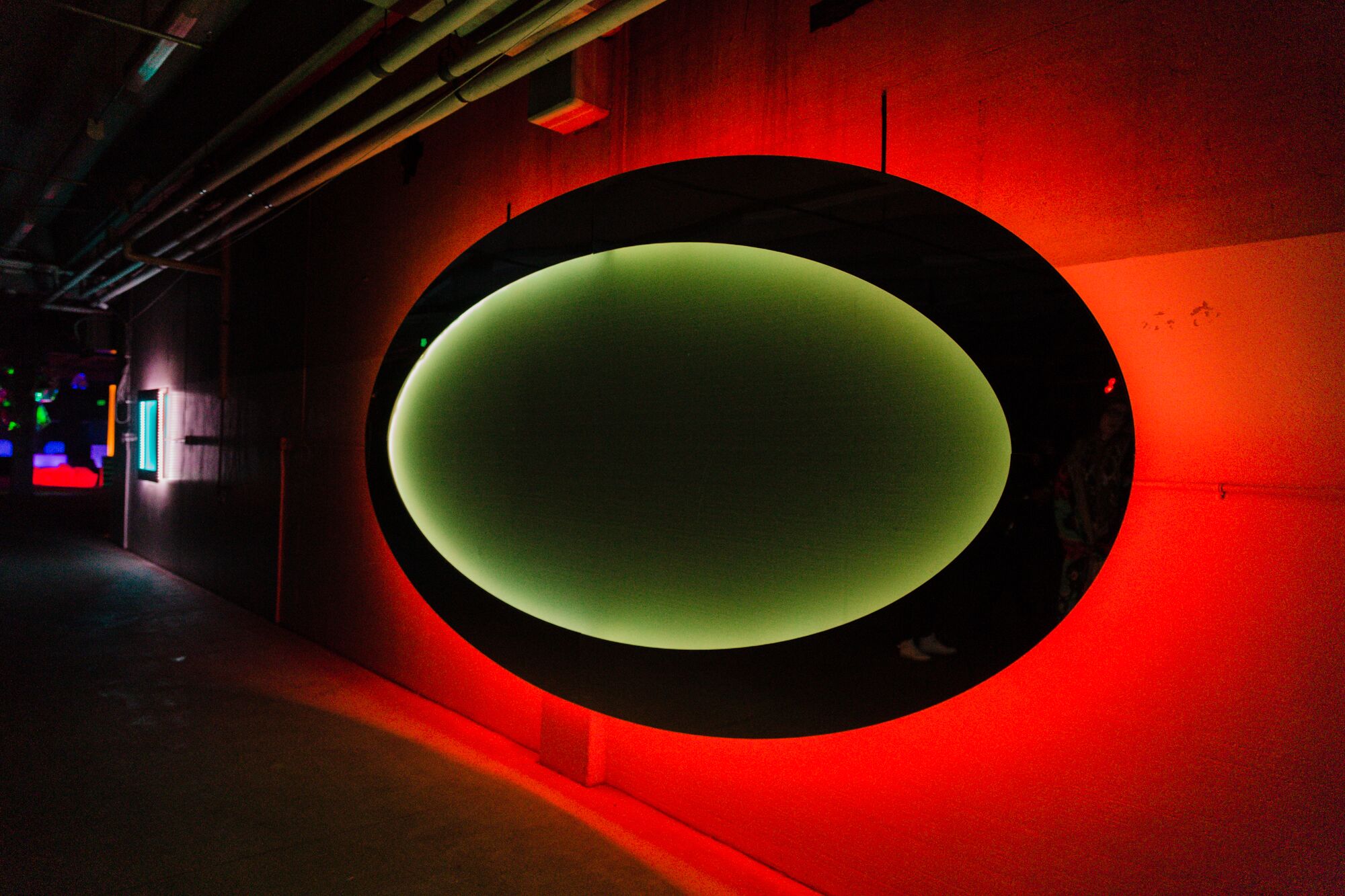 Main and Second Stages were designed by Jon Medina and Zac Layman of b1n4ry Visuals. Overall, the event felt similar to the immersive Far Out Factory, albeit with more of a budget. The main stage of Dark Palace utilized opaque materials and fabricated pillars with elements of soft lighting and LED digital projections. In some instances, the event as a whole went as far as to continue artistic elements and repurpose similar themes from Far Out Factory.

As far as the music was concerned, Dark Palace led with a heavy-hitting lineup of electronic music that exemplified the brand’s tastemaker abilities. DJs like MK and Claude VonStroke, laid waste to the blown-out space as fans danced across the floor and bleachers filling the crevices of the room. Lasers and LEDs shot out from the stage in dazzling light displays. The production of it all peeled back the curtain of Dark Palace’s Dance Obscura, thrusting attendees, their ostentatious outfits and dance moves into the spotlight. With such an all-consuming exhibition, the music itself took a backseat to the surrounding spectacles. For those who’ve frequented underground raves, the intention behind Dark Palace, the notion of less is more is indispensable when it comes to crafting a unified dance experience. This, however, was something Dark Palace fell short on. The music, which was great, should propel the experience and feel amplified by the production, not the other way around. 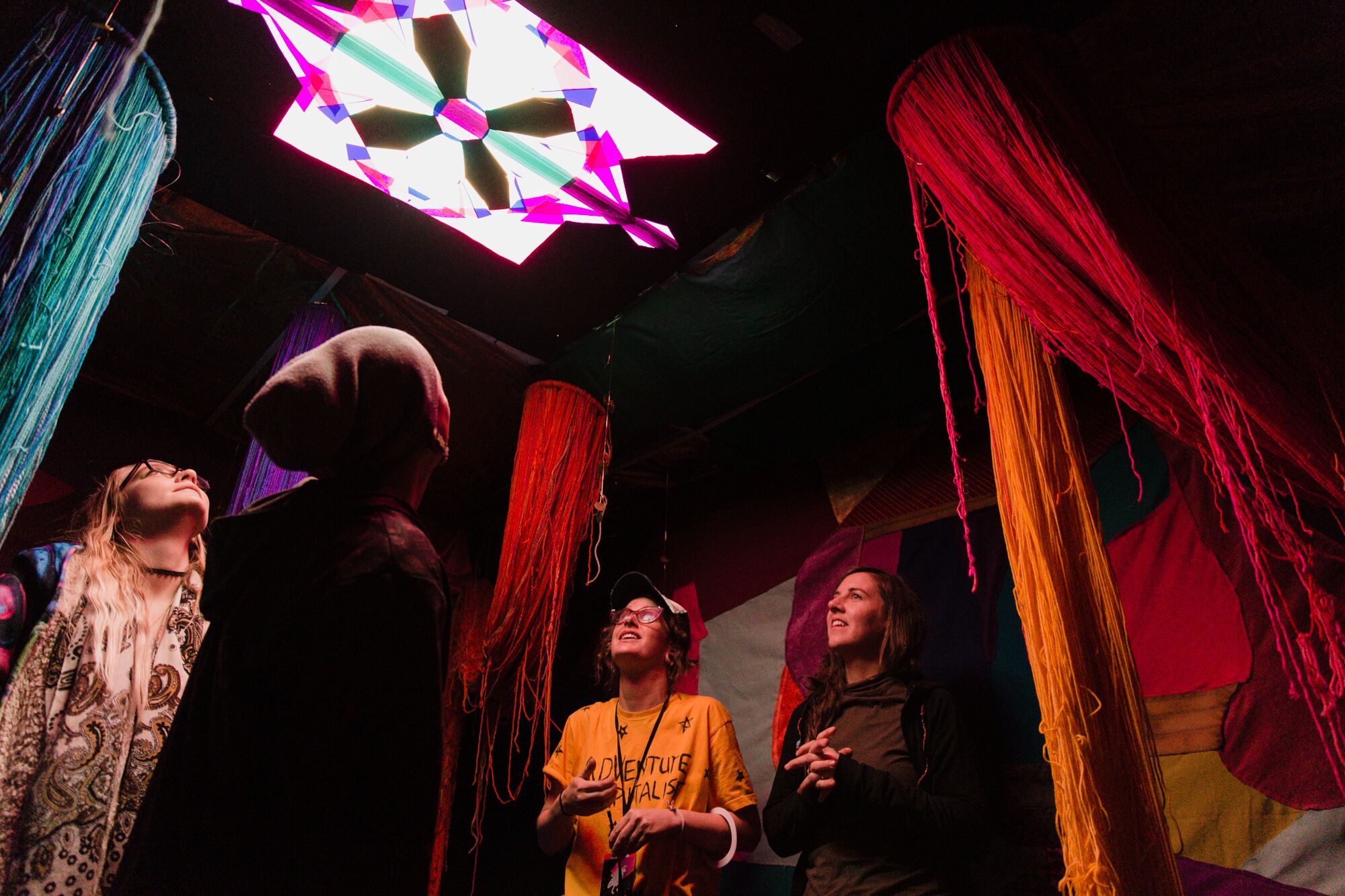 Despite the blown-out proportions of the event, the star of Dark Palace was far more nuanced. Much like the menagerie of rooms that make up organizer’s original location, the event featured a handful of lowkey alcoves, meticulously embellished by Denver artists as well as “easter egg” live performances. Artists took over empty offices and concession spaces, erasing any semblance of normalcy, draping materials projecting animations — creating small unique worlds in the process. Attendees would find themselves sucked into each void, connecting with others as well as the art. If the basis of art is to spark a conversation, these small carvings of space did that and then some. Likewise, live performances like that from The Girls of Denver Kiki Sessions and Psychopomps keyed into moments of spontaneity and wonder. The former voguing and strutting to the pummeling beats and the latter, donning billowing marshmallow-like costumes and roaming the space with extraterrestrial tension.

Meow Wolf’s Dark Palace threw a lot at the wall for an experience that strode the line of their ambition and their outlandish intentions. While some aspects shined more than others, Dark Palace never ceased to capture the public’s attention. Literally, there was always something coming into auditory and sensory fields and waivered between overly stimulating and at a junction of the absurd self-awareness people come to expect from the DIY collective. The promising aspect of it all is if Dark Palace was a taste of what the long-awaited Denver location has in store, Denver will surely be in for a wild ride.

Editor’s note: the initial version of this article did not attribute the stage design of this event to Zac Layman of b1n4ry Visuals in addition to Jon Medina. The article has been updated accordingly.