Visible’s immersive Phonetopia experience is cutting the cord this weekend, but not without dialing in a special guest to close things out in style. Thus far, the experience has had attendees doing everything from sliding into “DMs” to dodging notifications and providing content creation hot spots begging for a hashtag. 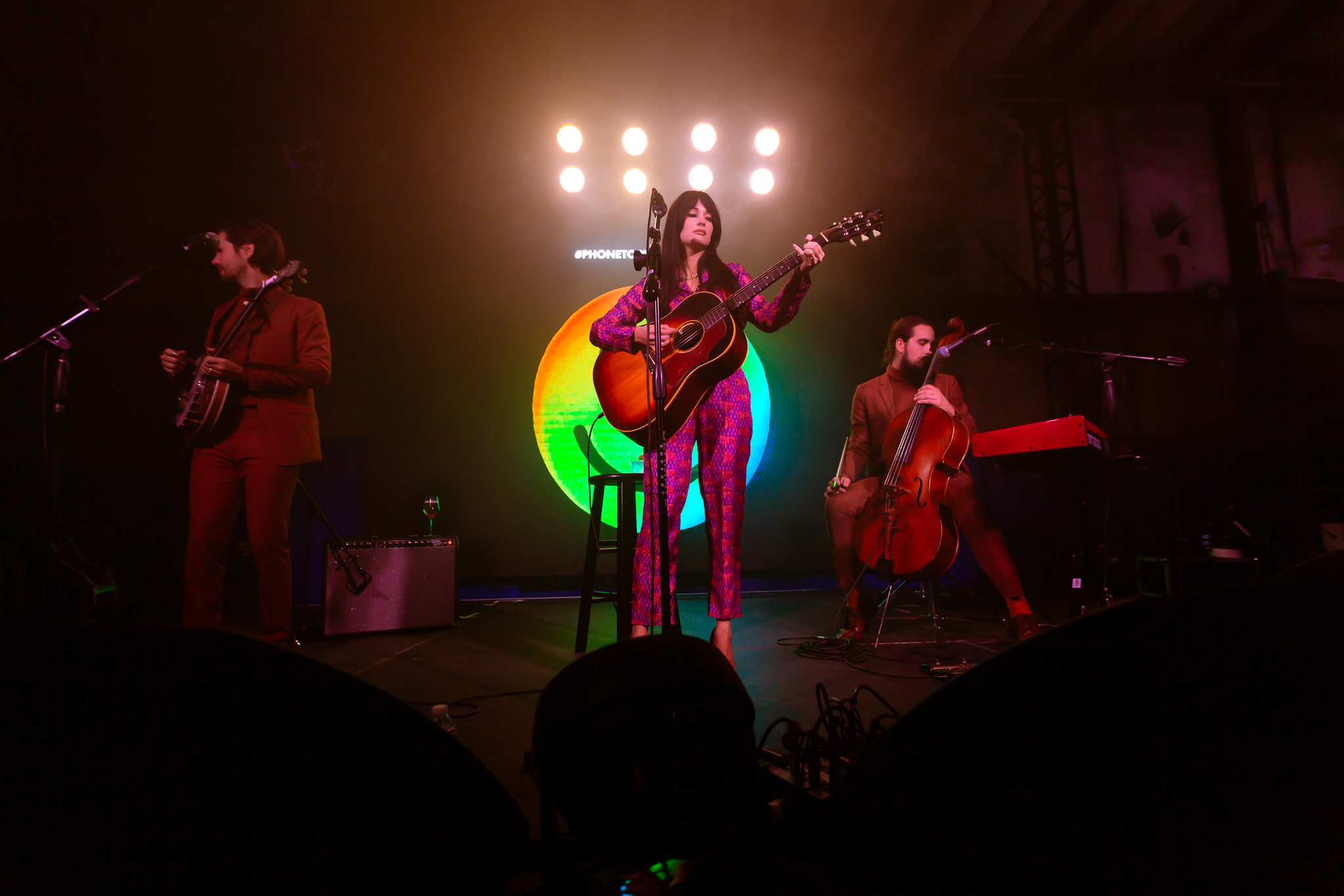 Musicians Maggie Rogers, HAIM, Tierra Whack and GRiZ delivered knock out performances for atypically intimate crowds.  Anderson .Paak surprised guests who expected French Montana, becoming a last-minute but more than a welcome add-on to the Phonetopia package. The finale, however, with country singer/songwriter Kacey Musgraves, came through with a golden experience to cap off Phonetopia’s royal blue retreat.

What You Missed At the Visible Pop-Up Shows with HAIM, Anderson .Paak, Tierra Whack and GRiZ

Long before Musgraves even hit the stage, fans with RSVPs and those without lined up outside Phonetopia’s warehouse residence in anticipation of the country star. Drinks were guzzled and local food trucks whipped out dishes for the lucky few fans in attendance. Some were even luckier, getting the opportunity to meet the petite star. Striking up conversation and casting waves of compliments while taking photos with Musgraves beneath Phonetopia’s rainbow arch provided a precious moment to connect with the “Follow Your Arrow” singer.

Eventually hitting the stage, in six-inch stiletto’s no less, Musgraves accompanied by only two of her touring band members, dived into “Slow Burn.” The stripped-back performance touched primarily on Musgraves’ breakout record, Golden Hour, encouraging the numerous voices around to join her’s. “Lonely Weekend” turned out a near dance party without the aid of drums and “Oh, What a World” floated effortlessly. The impromptu admittance that Musgraves had written the aforementioned “Slow Burn” while on acid received no shortage of relatable cheers. Musgraves had a couple of tricks in-store as well. A particularly beautiful rendition of Keane’s “Somewhere Only We Know” silenced the room while her upcoming Christmas collaboration with Troye Sivan, “Glittery” sparkled with premature holiday bliss.

The closing cut, “High Horse,” backed by a hundred or so handclaps in place of percussion, sent Phonetopia off on a high note. Musgraves, promising to return soon, departed the stage and many in the front lingered, holding out for an encore. While an encore never materialized, the sentiment remained — both Kacey Musgraves and Phonetopia shined on Saturday night.