Before JPEGMAFIA came to the Bluebird on October 24, the confrontational, zeitgeist-y rap rebel performed for Colorado twice earlier this year, opening for Vince Staples and Flume. In both instances, he proved to be too much of a loose cannon for the role. His meteoric, in-your-face sets left audience members — who weren’t really there to see him in the first place — unsure of what to think. Was he an acerbic madman, or actually the sanest —and most rightfully troubled— artist they’d seen in a while?

JPEGMAFIA’s own headlining performance at Denver’s Bluebird Theater on October 24 put these anxieties to rest. On this night of the adequately named “JPEGMAFIA Type Tour”, the avant-garde musician (nicknamed Peggy, born Barrington DeVaughn Hendricks) gave himself the time and space to display all sides of his artistry, not just his elevator-pitch persona. When he wasn’t forced to grab the attention of disinterested listeners and compress his sonic brand into one 30-minute sequence — the pressures and constraints of being an opener — his humanity shined through. His concert was a bit like his Twitter feed in the sense that moments of sincerity intermittently punched through his characteristic provocations. He would interrupt his own feverish discourse to respond in kind to fans who professed their love for him. He checked to see if an audience member’s glasses were smudged after witnessing — and participating in — a particularly turbulent mosh pit.

Ultimately, he’s a sensitive, normal guy — or as “normal” as anyone can be in this hyperreal wasteland of a world. It’s only natural that chaos ensues when he tries to musically describe it. 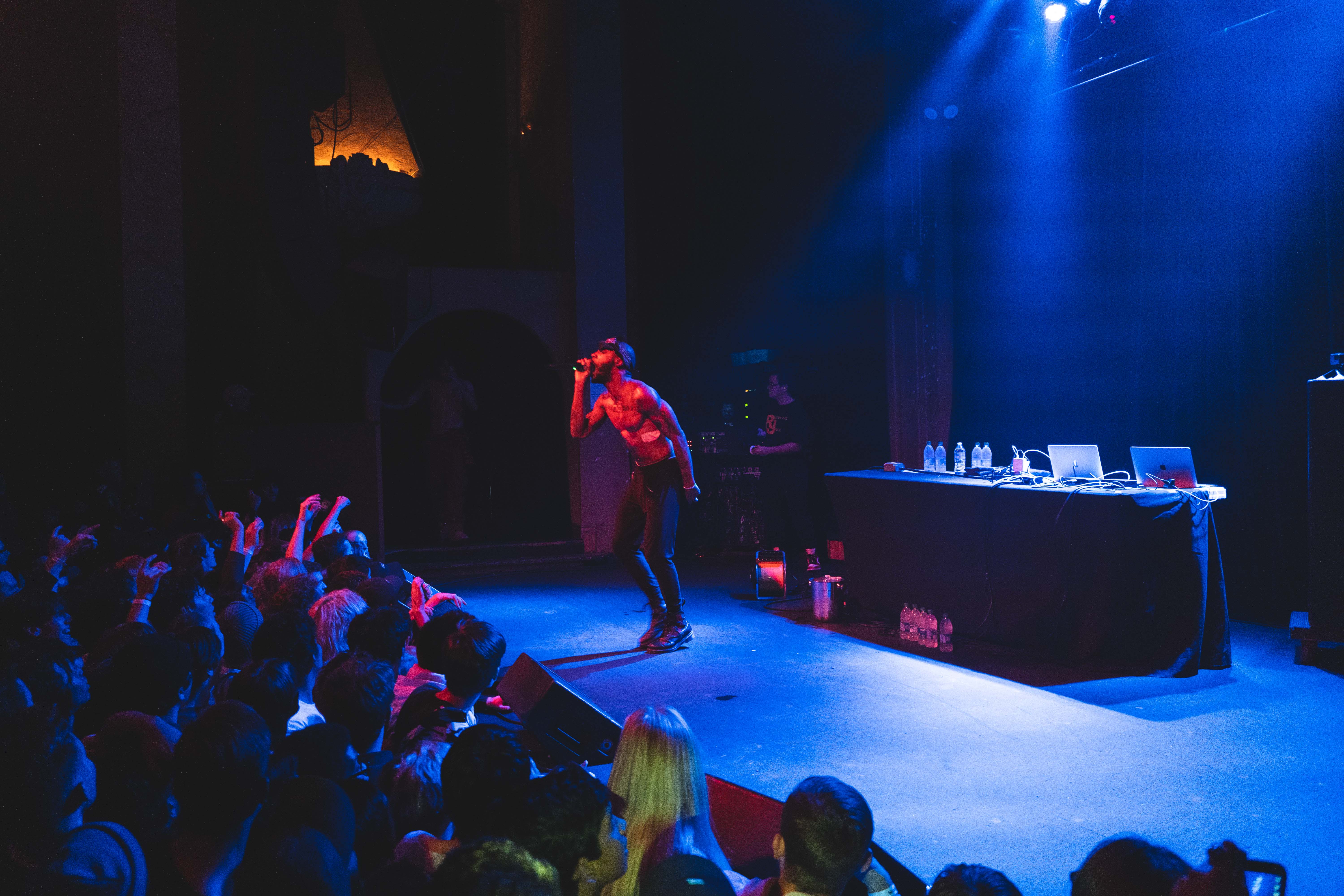 Butch Dawson kicked off the evening’s entertainment along with his DJ, Shido. The Baltimore-bred rapper’s experimental tendencies and occasionally goading lyrics made it obvious why Peggy chose him to be his supporting act. “Trigger” — the second song he performed and also the second track off his new album, Ollieworld — jarringly transitions into a skate-punk interlude at the song’s halfway mark, which features an actual the punk-rock band, white beast. Unexpected and seemingly random samples likewise pepper JPEG’s discography — see the industrial rock outro in “Kenan vs. Kel”.

The highlight of Dawson’s performance — and frankly one of the best parts of the whole night — was when he pulled an audience member onstage to be his hype man during “Arcade”. Ryan, a gangly guy with X’s on his hands, had the audience chanting his name long after his guest performance ended. 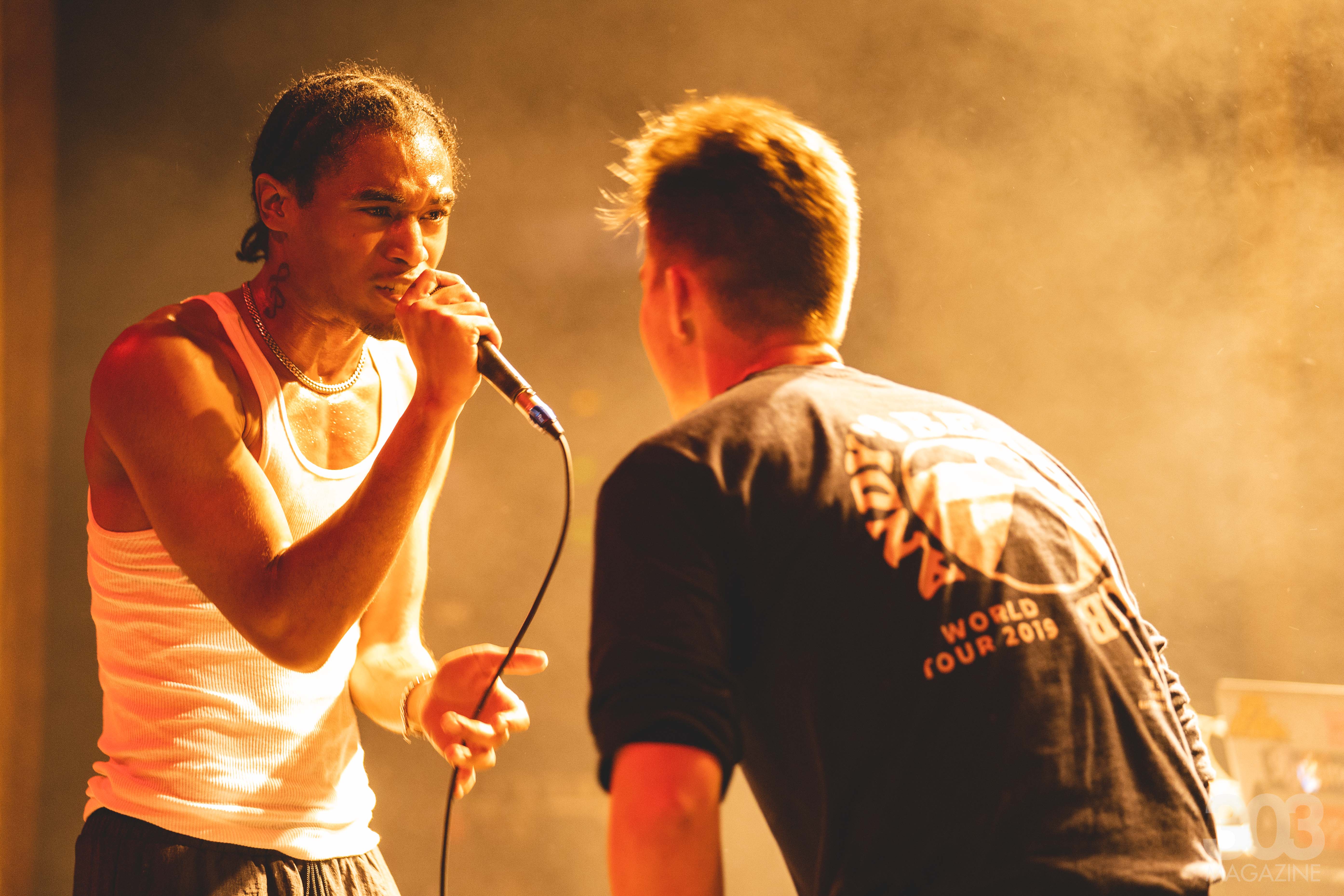 Butch Dawson and Ryan during “Arcade”

The crowd’s warm and enthusiastic reception of all those who graced the stage (they even applauded the techie who dropped off some water bottles between acts) facilitated a welcoming environment that encouraged victory-lap-style performances. A palpable sense of liberation suffused the theatre when Dawson and Peggy both realized they didn’t have to win over the audience. Everyone was already on their team. 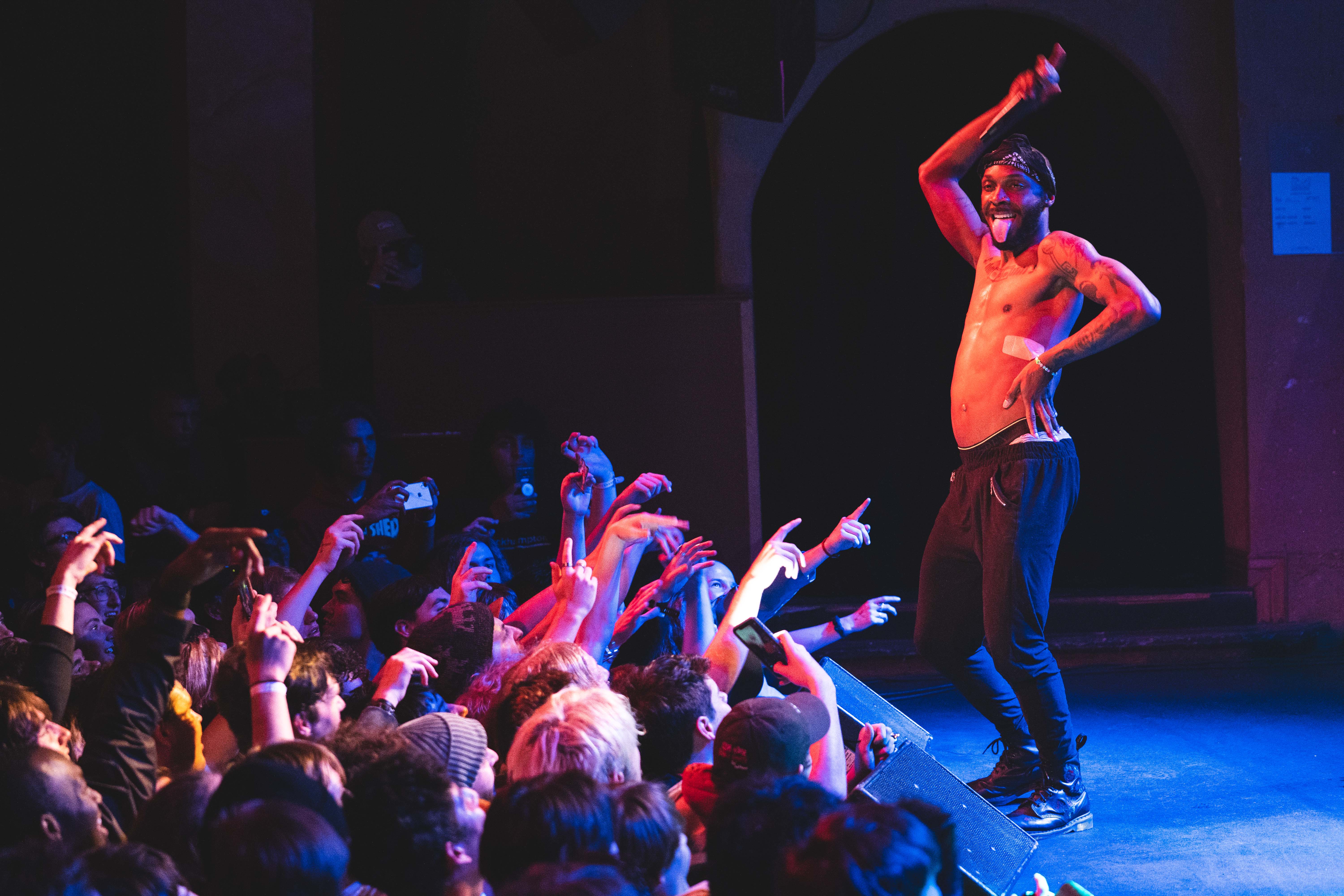 JPEGMAFIA was certainly more comfortable and relaxed than he’d been during his previous Denver outings, but he still brought absolute bedlam to the Bluebird. He tore off his shirt before he finished his first song, “Jesus Forgive Me, I am a Thot” — literally and figuratively bursting at the seams with new material. (His third full-length album, All My Heroes Are Cornballs, dropped on September 13 of this year.) Several times he told the audience he’d sit down to sing the next song and then preceded to… not do that, ever. He never remained still, instead opting to writhe on the floor, to rock his torso at a frequency that bursts blood vessels and to careen from one end of the venue to the other like a derailed locomotive. Not all of his songs’ performances were abrasive, but they were all uninhibited and completely full throttle.

Peggy would often spit a few a cappella bars to see how the audience responded. If enough people shouted his lyrics along with him, he’d go back to his laptop, add the instrumentals, and launch into the full version of the song. “Beta Male Strategies” and “Thot Tactics” passed this clearance, but “Papi I Missed U” failed to make it to the next round.

The artist also opened up the floor to requests a little over halfway into his performance. By popular demand, he played “I Cannot Fucking Wait Until Morrissey Dies” — a track of his second album, Veteran, that needs no further commentary.

JPEGMAFIA’s unformulaic setlist — attentively chosen by and for his audience — evinced his interest in giving the world more than mere mayhem. He exercised well the freedom awarded with having his own tour, and the crowd equally embraced his sentimentality and absurdism.

All photography by MJ Kampe. You can view the full gallery here.