Review – Flume Turned Oddities Into An Odyssey At Red Rocks

Flume is cut from a different cloth than his contemporaries. The electronic producer came to prominence rubbing atmospheric music against U.K. garage, house and hip-hop in the late 2000s to create a chafed amalgamation that’s blazed a trail within the electronic music genre. Allowing drums to collapse in on themselves and synths to flutter and glitch and beats to skip in purposeful malfunction, experimentation has always been the core of Flume’s persona but presented with accessibility. As avant-garde and genre-busting as his music can be, it’s taken a while for his live show to catch up, that is, until Tuesday night’s Red Rocks performance. 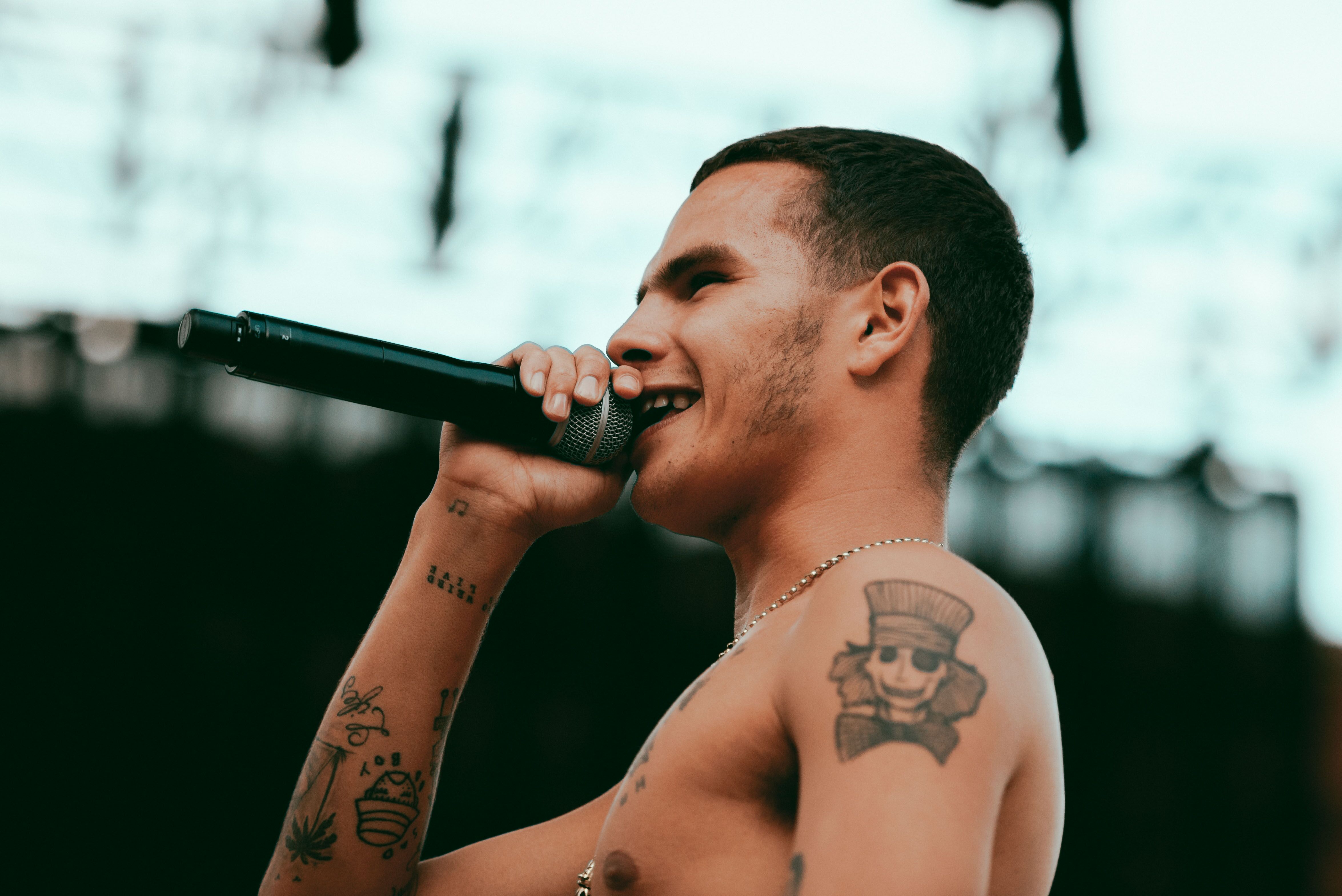 The performance, billed as Flume and Friends, burst through the gates with the first “friend,” emerging U.K. rapper slowthai. Commandeering the stage with his thick Northampton accent, slowthai accompanied by his DJ, grasping as much air as his carcinogenic bars could muster, took the upward ascent of Red Rocks to task. Over grimy beats and raucous bass, slowthai arrested hesitant hands in the sky with songs like “Drug Dealer” and “Gorgeous.” Trying to pinpoint a vibe in the atypical ascent of the crowd, slowthai midway through unceremoniously stripped down to his boxers, jumped the railing and joined the sold-out crowd in on the tiered steps, menacingly cutting his way through as he performed “GTFOMF.” The crowd, an insufferable mix of suburban high school and college-aged kids with a one-track mind for electronic music, met slowthai halfway sending a loud and clear message about whom they had really come to see. 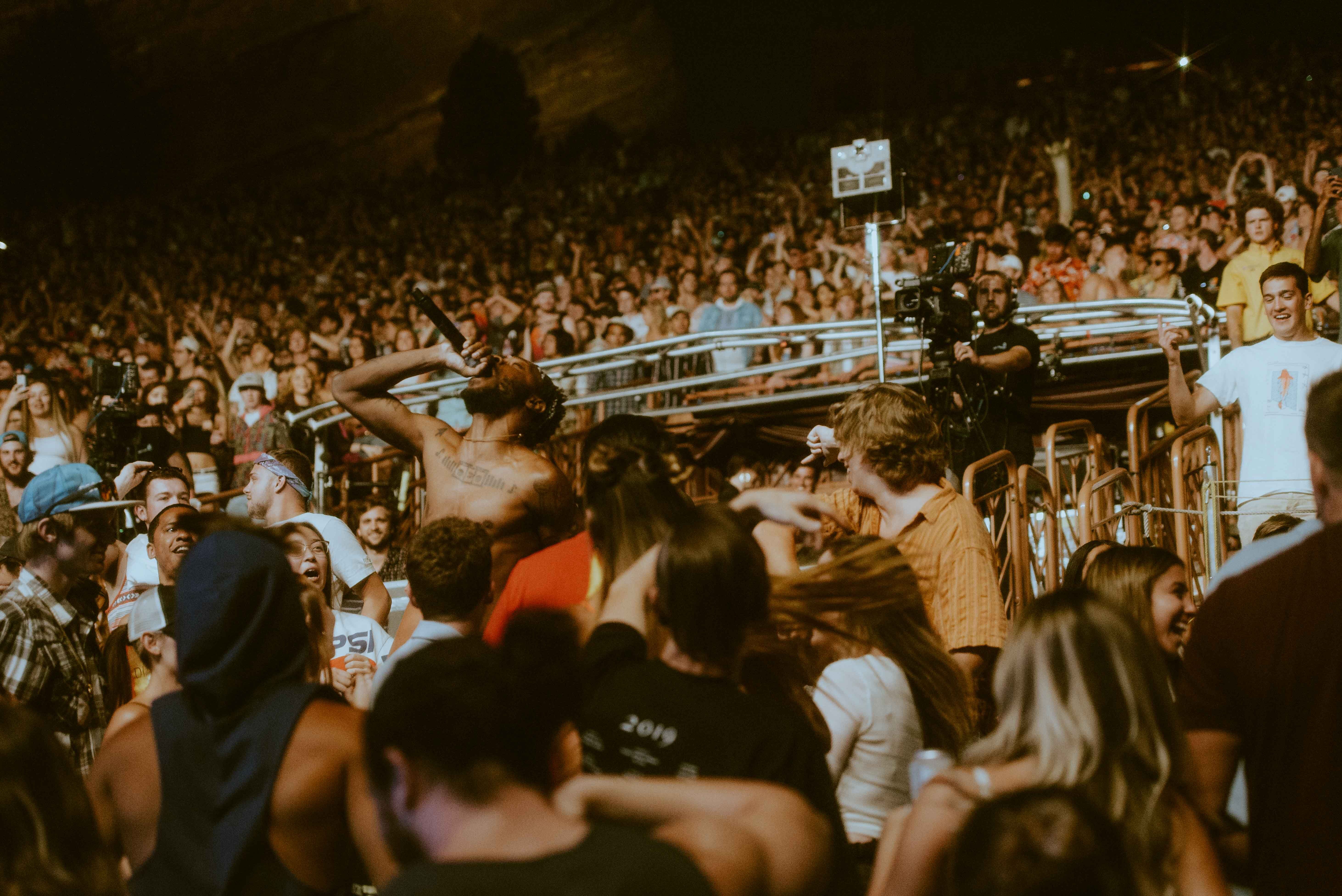 JPEGMAFIA in the crowd at Red Rocks

Following slowthai, was left-field hip-hop savant JPEGMAFIA. For those unaccustomed to the abrasive, mosh pit culling rapper, JPEGMAFIA’s set was at its best uncomfortable and at its worst, completely unwelcome. A couple of blood-curdling screams in and people were bewildered. Best served in claustrophobic spaces, where the sweat of other bodies rains down in a mixture of disgust and euphoria — JPEGMAFIA — in the cracked open shell of Red Rocks, was lost in translation. For what it was worth, the lucky few in the first few rows, in which JPEGMAFIA cruised through and sent bruising beats and bars, felt the earth splitting decorum that JPEGMAFIA consistently brings to the stage. However, for those in the back, it went as far as sending one particularly vanilla listener to proclaim, “if you want people to listen, you can’t yell at them,” at which moment the performance had reached a point of no return and head shaking, soft-shouted heckling and booing began. 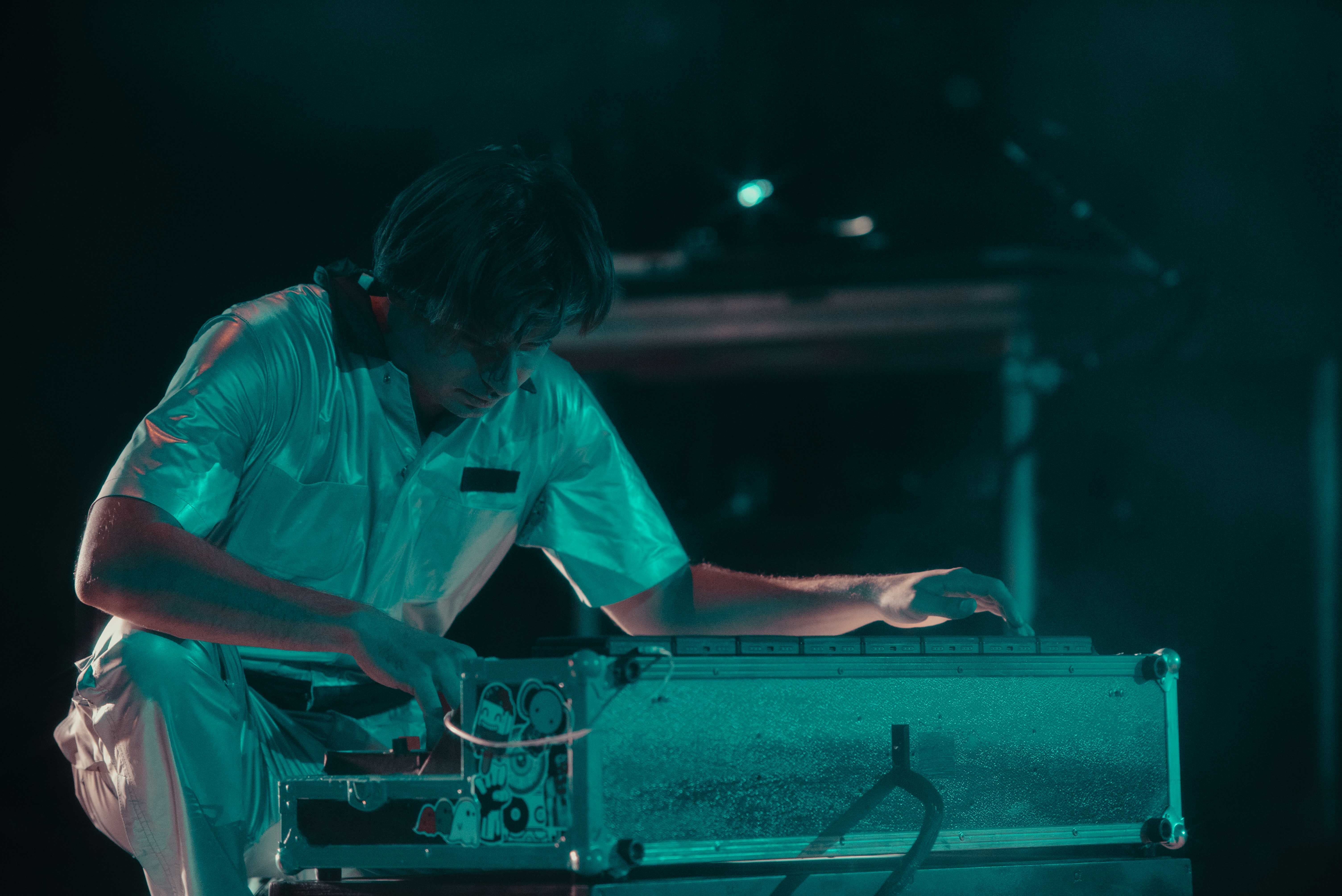 Once the animosity subsided and the time for Flume had finally approached, the atmosphere in the amphitheater mellowed out. When the house lights eventually cut out, Flume, dressed in a metallic jumpsuit, nonchalantly took to the stage, where a shop desk outfitted with LED lights, three stations of electronic instruments (two on the side and one in front on the floor) and an outstretch rug laid upon the stage. As the dazzling lights danced around him and a robotic voice echoed his name, Flume began spray painting at the desk, before moving to his side panel to launch into “Sleepless.” Sparks flew when the beat finally dropped and the amphitheater danced into the night air. 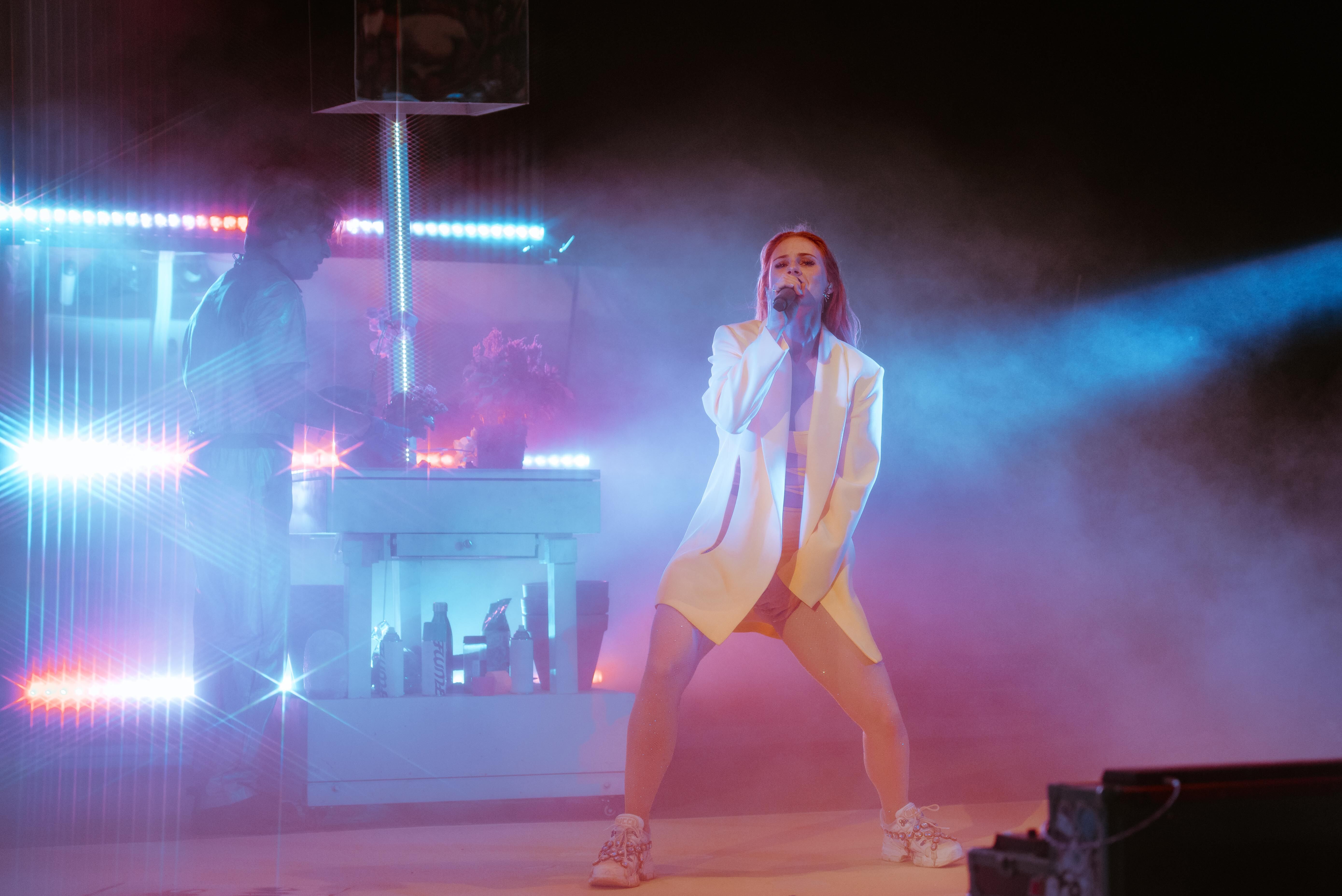 Following the “Sleepless,” Flume brought out slowthai for “High Beams,” crouching at the electronic instruments in the front as the rapper made his way through the crowd again. Then, Vera Blue arrived to the stage to lead the crowd into a rather magical version of “Never Be Like You,” as Flume began setting up flowers on the desk, at which point the set began to shift. As the set rolled, Flume seemingly began to unwind, smashing the flowers pots to the jagged breakdown of his remix of SOPHIE’s “Is It Cold In The Water?” as neon lights and lasers enveloped his rag. He proceeded to take a handheld saw to the table during “Smoke & Retribution” and later a sledgehammer to computers and TVs during “Wall Fuck.” Mixing into “Insane,” he sprawled out on the floor and a single light lit up half his profile meanwhile images of galaxies and broken glass swirled around his face as he lay in the wreckage, with peace coming in the form of four performers mimicking Tai Chi around his limp body.

Besides mixing the music together and breaking apart his fractured tunes, Flume was seldom hostage to the instruments. He moved across the stage with freedom, between the stations, breaking the bonds of what a producer can do with his music and how he can embody it. It was quite literally like watching a person in the throes of a mental breakdown whilst dancing into the abyss – choreographed to the off-kilter production the producer is known for. 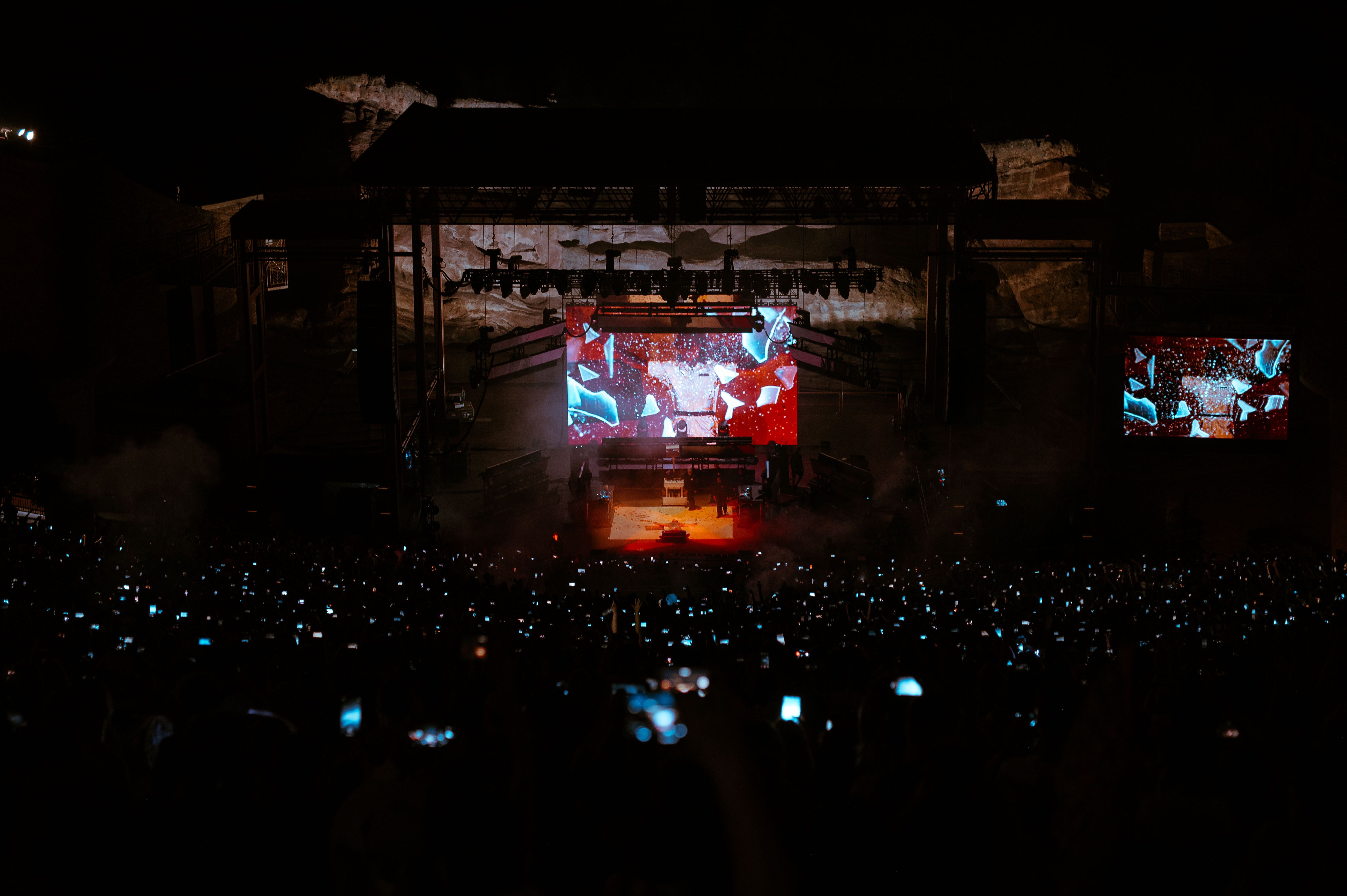 As the set made its way to close, the trauma gave way to beauty as Flume debuted new song “Rushing Back” alongside Vera Blue, Reo Cragun lent a hand during “Quits,” and fans watched as a marvelous collection of lasers spun around Flume as he blasted off his wild “HyperParadise” remix. Ending the performance with his popular “You and Me” remix, Flume  led the audience by the hand, dancing full stop into the abyss.

Looking back at the night a day later, few performances have managed to grip quite like Flume’s. At every turn, there was a surprise and a catharsis that transcended the typical electronic set — it was art in motion, that managed to break everything including limits. As it would seem, the oddities that separated Flume from his contemporaries finally came to roost in a breathtaking odyssey of light and music, that was nothing short of triumphant.