Meet the Artist Who’s on a Cross Country Mural Painting Tour and Stopped in Colorado, Twice

When Skye Walker decided to start painting murals full-time, it was only after a decade of working in other industries and surfing in Encinitas, California. It wasn’t that he hadn’t ever painted a mural before — his dad was a muralist and taught him the tools of the trade at a young age — it was that he hadn’t thought of it as a career. But his first commissioned mural project changed his mind and brought him into the world of public art in 2010 with a passion for connecting with the community surrounding each mural.

Since then, he’s painted roughly 80 murals — all over the US. And in August, he’ll finish a 14-month road trip that took him through 29 states — that’s more than 20,000 miles — leaving dozens of freshly painted murals in his wake. For the trip, Walker outfitted a van to live and travel in, enlisted the help of friends and strangers and learned about the importance of public art across the country. 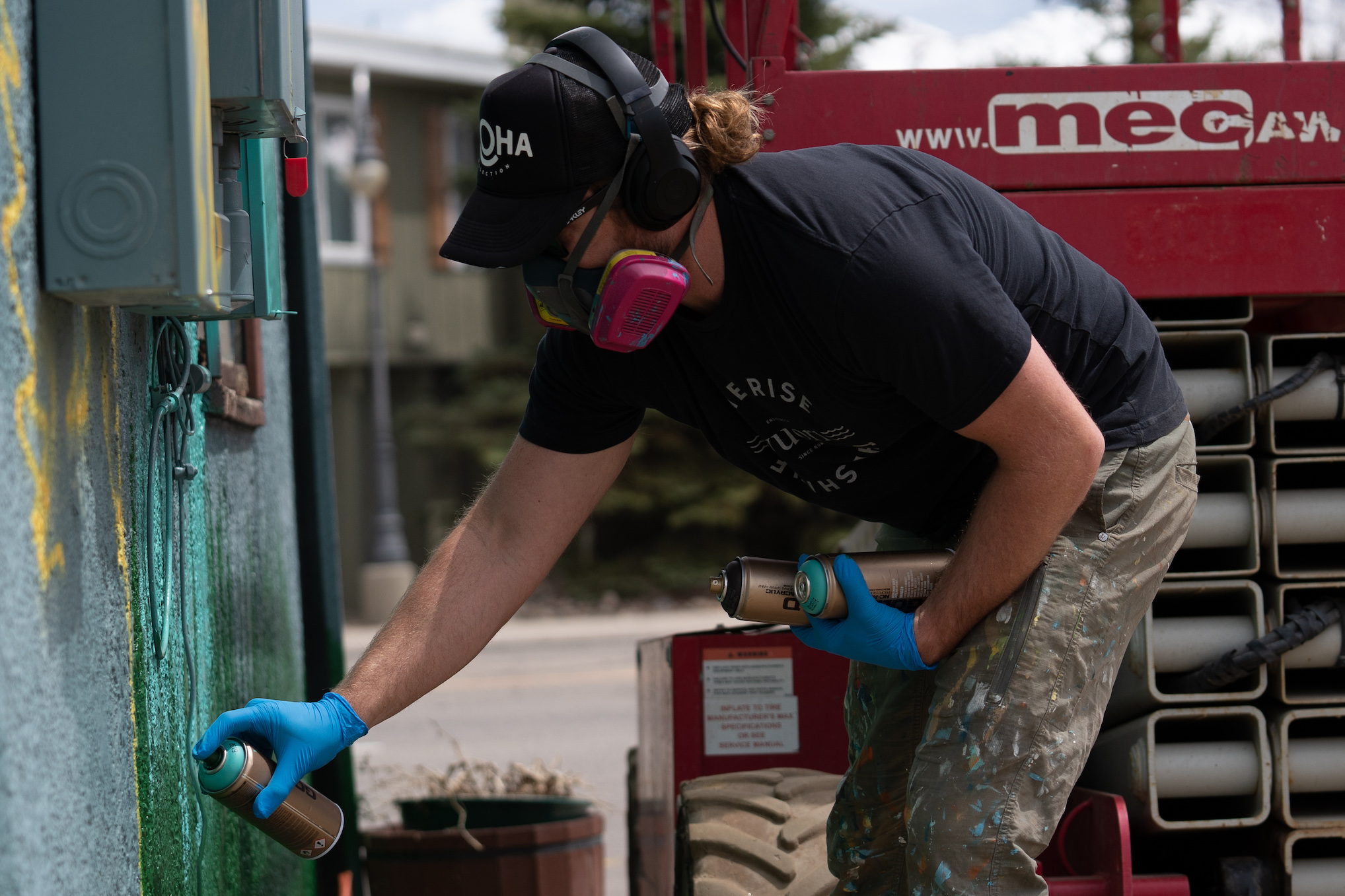 He’s called this dream-trip his “Sea2Sea” Mural Tour. When he decided to embark on it, just over a year ago in June 2018, he didn’t know what to expect. But 10 months in and a handful of states away from home, he realized it was maybe one of the best ideas he’s ever had, and he extended the dates by two months to end in August 2019 rather than June. With the extension, he had time to come to Colorado in May 2019 to paint two murals — one in Fraser and the other in Estes Park.

“The challenge of making this become a thing is now a reality, which in hindsight blows my mind,” Walker commented. “But [it] also makes me smile because I accomplished everything I wanted to do and more… The kindness of strangers has really restored my faith in humanity. It reminds me that even though times are tough all over, people will still go out of their way to help another person. I’ve had strangers share their homes with me… strangers bring me food while I’ve been painting, strangers refer me to paint murals in places I was going next and the list goes on.”

One of Walker’s main goals with being a muralist is to inspire others to find their own creative outlets, therefore elevating the “consciousness of a community.” Throughout his tour and in his regular mural career, he’s sought out projects that have strong community impacts or which utilize groups who benefit from artistic interaction. “Public art really lifts up communities and is a constant inspiration to so many. It really is important to our culture,” he said. But his quest for inspiring others doesn’t stop there — his work is also focused on environmental stewardship, a lesson his parents (who were in a band called The EarthWalkers) taught him.

Both of the murals he painted in Colorado integrated natural and local elements like native wildlife, pine trees, mountain vistas and blue skies. The one in Fraser was his 25th completed mural in the tour, which he finished near the end of May. It’s located on the south side of Camber Brewing and features a moose, bear, fox, mountains and the words “Enjoy Fraser.” It was commissioned by the Fraser Public Art Committee (PAC), who has taken it upon themselves to start embracing public art in the mountains with their mural project and mural festival.

The 26th mural on his tour and the second in Colorado happened at Estes Park High School. Walker encourages collaborations with other artists as often as he can, and for that one, he had the help of two friends — Kelly Peters and Ingrid Jones.  The 70-foot by 10-foot mural stretches around a corner and features bobcats, mountain goats and moose.

“Both experiences [in Colorado] were epic with amazing people in the mix,” Walker explained. “Colorado has so many amazing and talented artists. I cruised around the RiNo district and the amount of art down there was stellar. I saw one artist’s work, Casey Kawaguchi, and I really loved it and wished I could see him paint. Then, I met him in Boise [Idaho] as he was doing a live mural there for a festival and he was such a nice guy! He’s just one of so many talented artists in Colorado. I think Denver is on par with other big cities that are bringing street art to center stage.”

Since painting in Colorado, Walker has traveled to five more states adding an additional four murals to his list. As the end date nears, he’s already looking forward to another mural tour in 2020 or 2021 — after re-grouping at home in Encinitas and working on an art show inspired by his travels. 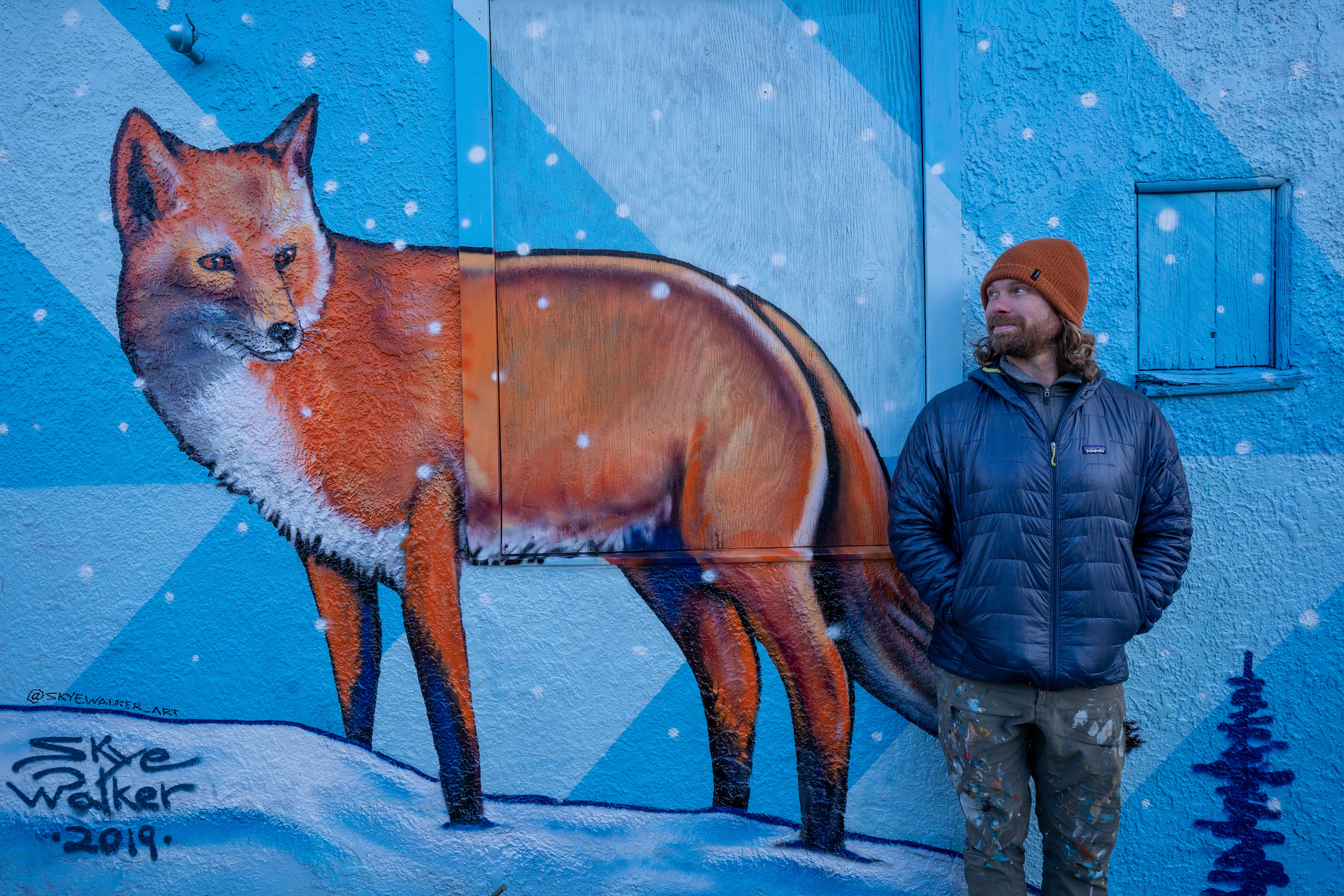 Walker in front of mural #25 in Fraser. Photo by Cort Muller